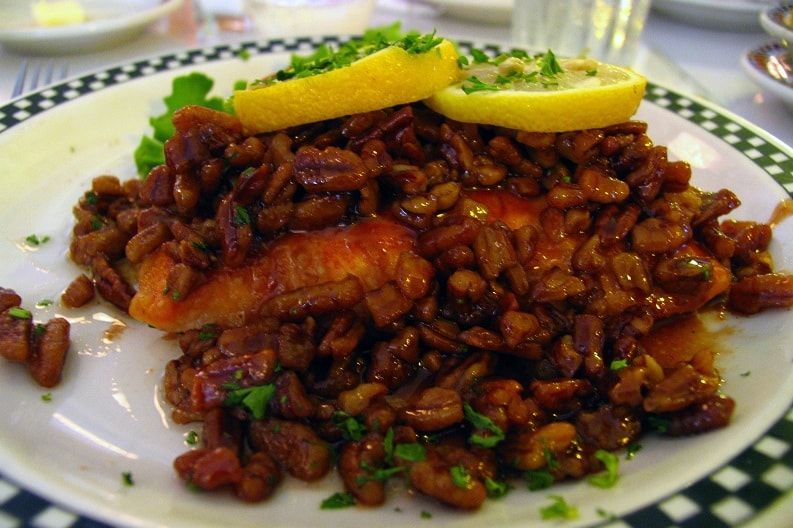 Kahlua Salmon entrée at All Steak Restaurant in Cullman, Alabama.

A place with the pecan as its state “nut” is bound to have great food—at least as far as my taste buds are concerned! In fact, Alabamans even have an annual Pecan Festival.

Pecans, I discovered in Alabama, though, end up in a lot more than my favorite pie. The All Steak Restaurant in Cullman delivered up one of the most enjoyable pecan dishes I’ve ever eaten with their Kahlua Salmon entrée. Pecans, immersed in a brown sugar/kahlua sauce that’s not overly sweet (at least to me), added a delicious contrast to the moist grilled salmon. With my choice of squash casserole as a side, that dinner is still one of my Southern favorites.

This family run restaurant is best known, of course, for its steaks, although the menu offers a wide variety of dishes from Tilapia fish to Fettuccini Marinara to Chateaubriand. Restaurant décor is simple, but elegant enough to give families the feel of “going out” to dine.

And, at the end of each meal, diners are all treated to All Steak’s famous orange rolls for dessert—tiny cinnamon-bun like rolls seasoned with oranges instead of cinnamon and brown sugar.

After pecans when I hit the south, seafood tops the list of things I must have. There’s just no way to resist steamed royal red shrimp, at least as far as I’m concerned! 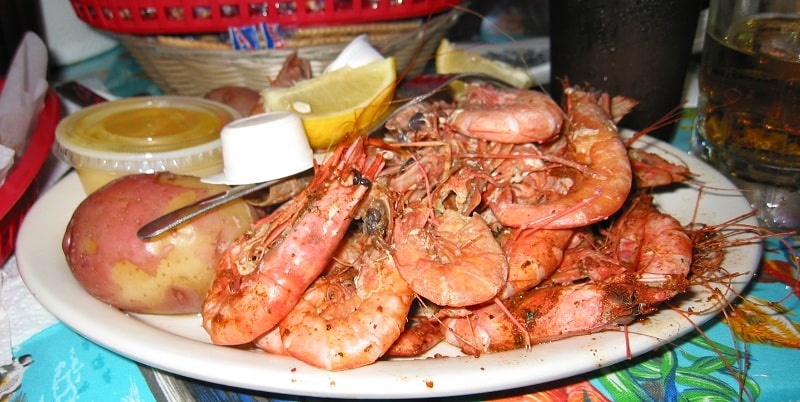 So, when I saw a pound of them listed on the menu at Doc’s Seafood Shack and Oyster Bar, in Orange Beach, I knew I’d chosen the right restaurant. These deep sea salt water shrimp served in the rough came with corn on the cob and new potatoes, so were a veritable feast for this prairie girl.

King Neptune’s Seafood Restaurant in nearby Gulf Shores offered a variety of options to help satisfy my craving for seafood too.

Starting off with cocktail crab claws, oysters on the half shell, and oysters steamed in garlic butter, all I needed for a main course was a perennial favorite, seafood gumbo. 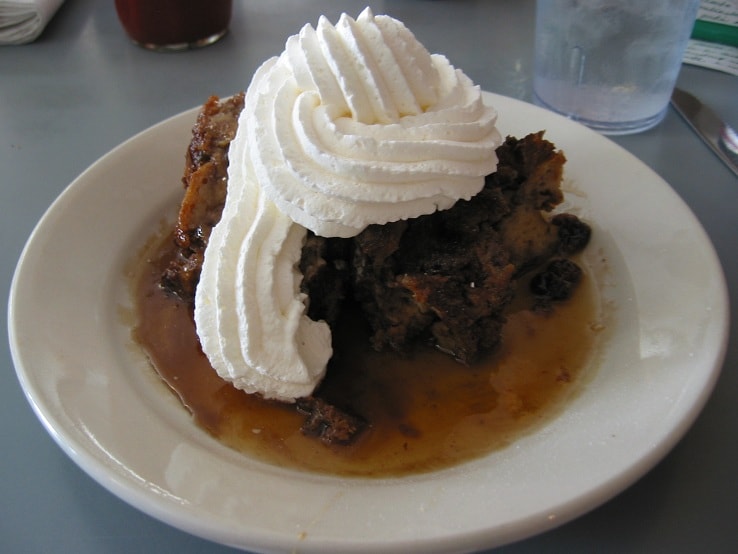 Talking to the owners, Al and Diane Sawyer, I discovered that they loved seafood as much as I do. After working around the Gulf coast in a variety of restaurants and selling fresh seafood harvested by Bon Secour Fisheries, Al brought a lot of experience to the seafood industry.

He and Diane now own not one, but two, seafood restaurants, with the second being Captain’s Galley in Bon Secour. They recently took first prize at the Food Show in New Orleans, beating out 500 competitors.

Another great seafood restaurant, Simp McGhee’s in Decatur, is named for an infamous riverboat captain on the Tennessee River. While the feasts aboard McGhee’s boat were occasionally rumored to be at the expense of fishermen and hog drovers he’d tricked out of their goods, the strangest tales of Simp are about a pet pig that sat at the bar with him and tipped back its own mugs of beer. 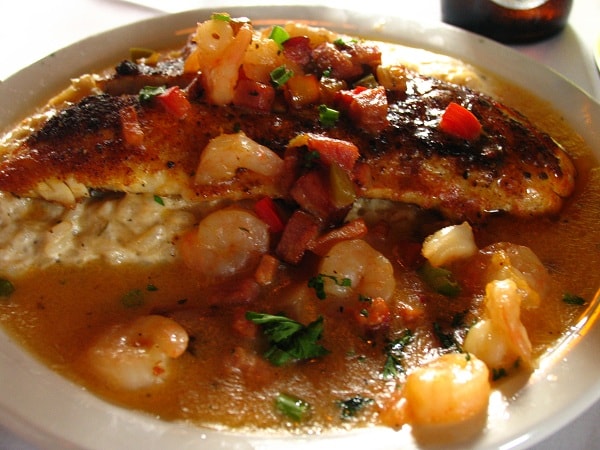 Today, Simp McGhee’s is a fine dining room with an atmosphere reminiscent of the best of those riverboat days.

There are some unique dishes on the menu, from the Crystal Shrimp (large gulf shrimp over andouille grits with tasso gravy) to Grilled Tuna (cooked to medium-rare and served over sauteed cabbage and apples with sesame glaze).

My choice as a main was red fish topped with a shrimp sauce over steamed rice. Yum!

For even more inspiration, I went on to nearby Ivy Green, where I watched The Miracle Worker, a live performance about Helen Keller’s life that runs weekends through June and July. As well, the Helen Keller festival is held annually in Tuscumbia in June. 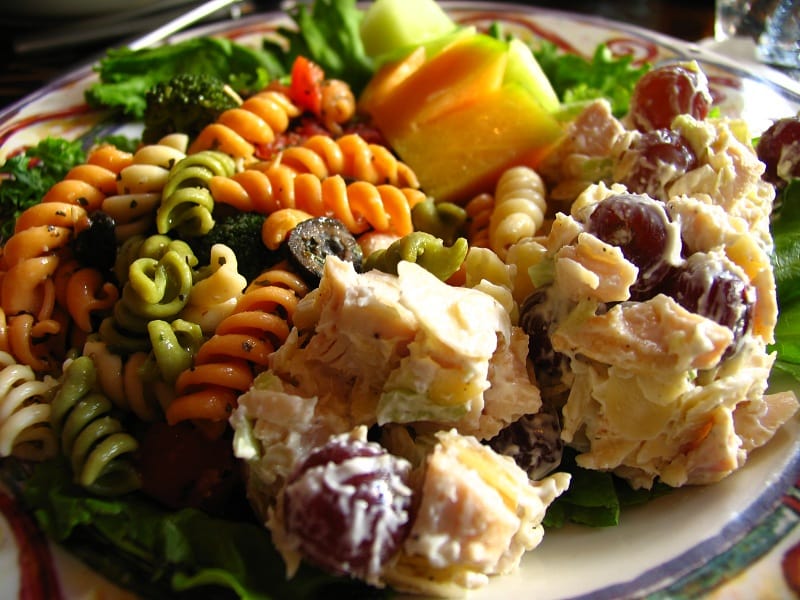 For lunch (the restaurant is only open from 8 a.m. to 2 p.m. Tuesday to Saturday), I discovered the Limestone Bay Trading Company in the tiny historic town of Mooresville, near Huntsville. Along with the red checkered tablecloths and walls lined with wooden shelves filled with old crockery, dishes, books and knickknacks, the aroma of down home cooking fills this homey little restaurant. My choices were southern favorites: cornbread and barbeque pork, both of which were great.

And now, for dessert!

While the entrées are important, I’m a diner who needs her dessert. And I found some fabulous ones in Alabama!

Dee Green, owner of the Limestone Bay Trading Company, told me that people drive from miles around for her coconut cake—and I could certainly see why. 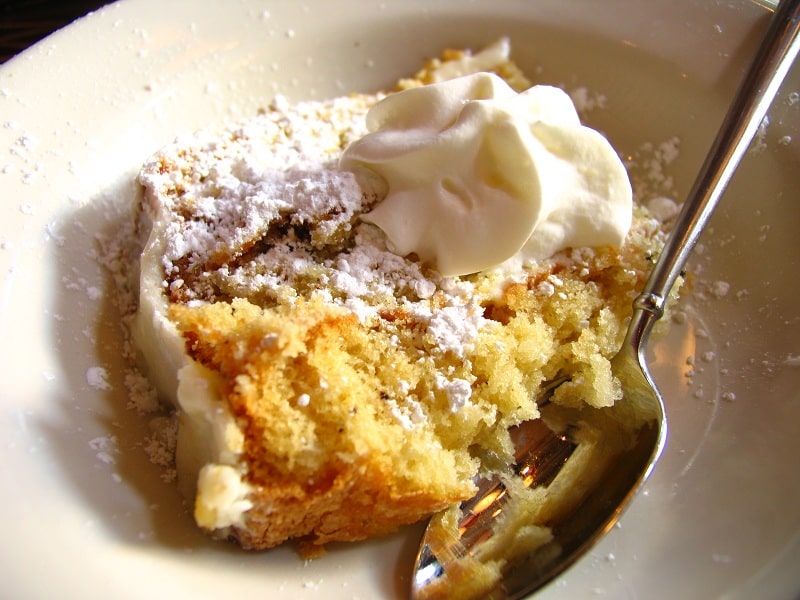 Sweet is always good and King Neptune’s Seafood Restaurant did a fabulous job of turning plain French bread into a pudding second to none. French bread is baked in a sweet cinnamon vanilla custard with bananas, then topped with a whisky sauce. Add raisons and whipped cream and you have a dessert to drive for.

Get a taste of Alabama wherever you are

It’s easy to take some of Alabama’s pecans home with you, especially if you visit the Seven Winds Kitchen, located between Huntsville and Birmingham. The pralines are great, as the caramel candy covering melts in your mouth, leaving the crunchy goodness of the pecan to follow. However, the pecan gems, roasted in Seven Winds’ secret brittle recipe, are my absolute favorite. 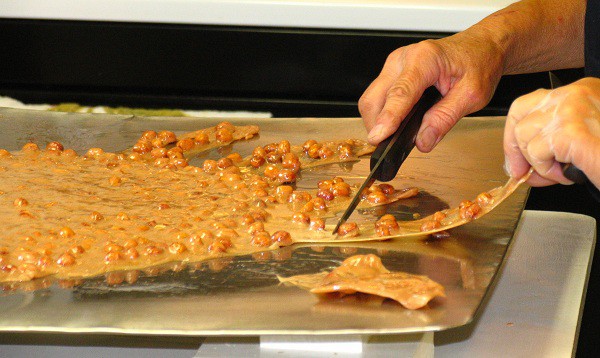 Pecan gems being made at Seven Winds Kitchen in Birmingham, Alabama.

Seven Winds Kitchen began because of the secret brittle recipe. Back in the 1940s Berta Gammon, Francis Scruggs and Jane Gammon’s mother, perfected a homemade peanut brittle recipe that was loved by family and friends alike. In 1994 all three women went into business, although Berta has since retired from active duty in the kitchen! Today, they have a thriving local business and an online store.

So, no matter where you are, you can sample some of Alabama’s best!