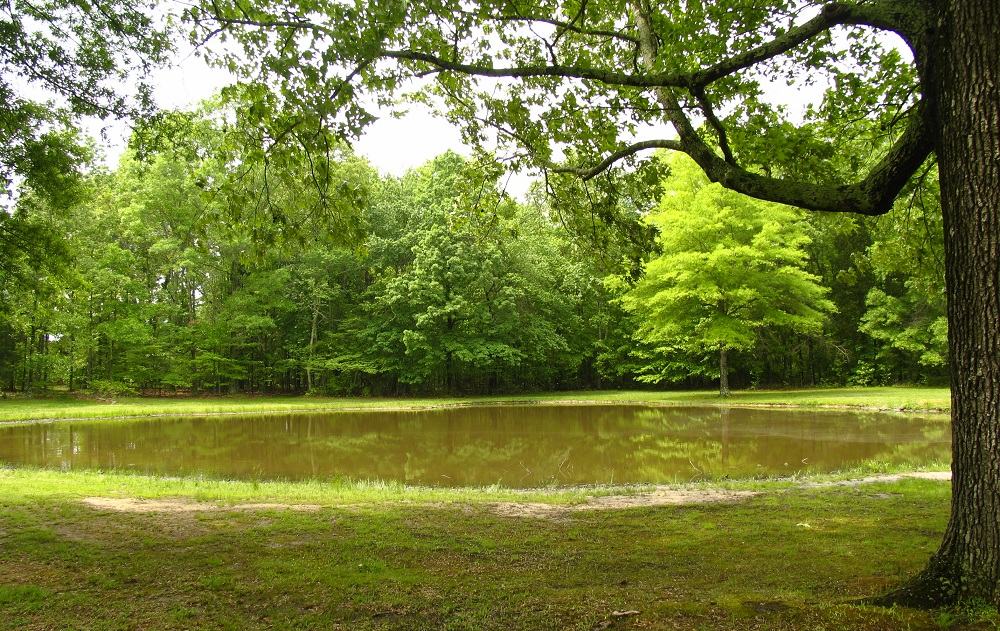 Some say ghosts still drop exhausted to the ground, dip their heads and appease their thirst with water from the Bloody Pool, while gunshot echoes from the past ring out around them. Still others see a lady in white, picking her way among the dead and dying, seeking the face of the one she loves, on the battlefield at Shiloh.

Although it’s been nearly a hundred and fifty years since the Battle of Shiloh/Pittsburg Landing, the bloodiest battle ever fought on American soil up to that time, there’s still a sense that time hasn’t moved on at the Shiloh National Military Park.

Bounded on the east by the Tennessee River, the nearly 4200 acres of Shiloh National Military Park in southwestern Tennessee also has water boundaries on the south, with Lick Creek and its tributaries, and on the north and west by Snake Creek and its branch, Owl Creek.

While waterways are important today, back in the time of the Civil War, controlling the water meant winning or losing not only the individual battle, but the war itself.

Along the Tennessee River in 1862

The main battles of the war were fought over capturing and retaining control of the transportation routes—waterways and railways. 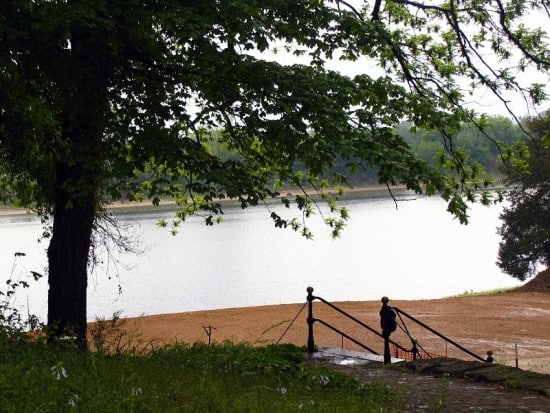 Pittsburg Landing on the Tennessee River.

In March of 1862, Major General Ulysses S. Grant brought his troops down the Tennessee River, which the Federals had just gained control of from the Confederates. The steamboats stopped at Pittsburg Landing, although Grant’s ultimate goal was to capture the small town of Corinth, where the Memphis and Charleston railroad lines, along with the Mobile and Ohio, all crossed.

Grant, under direct orders of Major General Henry W. Halleck not to engage the Confederates until more forces gathered, established his base on Shiloh Hill, west of the Tennessee, and set up forward camps two miles further inland, around the log church, Shiloh Meeting House.

April 3, 1862, brought heavy rain, turning the whole area into a sodden mess. Supreme Confederate Commander in the west, General Albert Johnston, marched his column of troops, artillery and wagons through it, planning a surprise attack. As the sun rose on Sunday, April 6, Johnston’s 44,000 men stormed Grant’s camp of nearly 40,000 men around Shiloh Church, driving them back nearly into the Tennessee River.

The long day’s fighting, however, brought many casualties, including General Johnston’s death, so General P.G.T. Beauregard took over as commander. At dawn the next morning, it was the Federals, under Grant, with reinforcements General Buell had marched off of transports on the Tennessee during the night, who led the attack. Outnumbered now, by more than 20,000 troops, Beauregard withdrew, marching his Confederate army 22 miles back to Corinth, which he was later forced to abandon.

There were nearly 24,000 casualties in the two days of fighting at Pittsburg Landing and Shiloh Church, leaving much more blood than the Bloody Pool behind.

The tour of the Shiloh Battlefield begins at the visitor center, which is situated adjacent to the Tennessee River and the actual Pittsburg Landing site. The center has exhibits and a 25-minute film providing background information on the site. 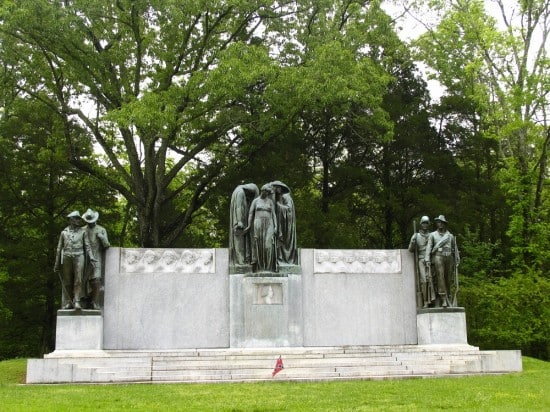 Situated right behind the visitor center, the National Cemetery is the burial site for the fallen Federals who came from 15 states and 273 regiments. Ghosts still surely walk among these simple markers, especially those of the 2359 graves that don’t bear a name. Of the 3584 buried here, only 1225 were known. Further out along the Corinth-Pittsburg Landing Road in the park, there’s what’s believed to be the largest of the five mass burial sites of the war. In the days following the battle, Federal soldiers dug these two trenches to bury the 1728 Confederates who’d just fallen, along with other victims of fighting along the river.

Roads through the park take visitors around to view the 156 monuments, 217 cannons, and more than 650 historic tablets. When the park was established in 1894 by the War Department, they created a Shiloh Park Commission. This group, made up of veterans who’d lived through the battle, planned the site to include troop position markers and historical markers. Many states, whose regiments had been involved, worked with the Commission to design and construct monuments to their troops. In 1933, the park was transferred to the National Park Service for its care and management.

The self-guiding tour covers ten miles, with some of the highlights being spots like the Bloody Pool and an exact replica of the Shiloh Church. 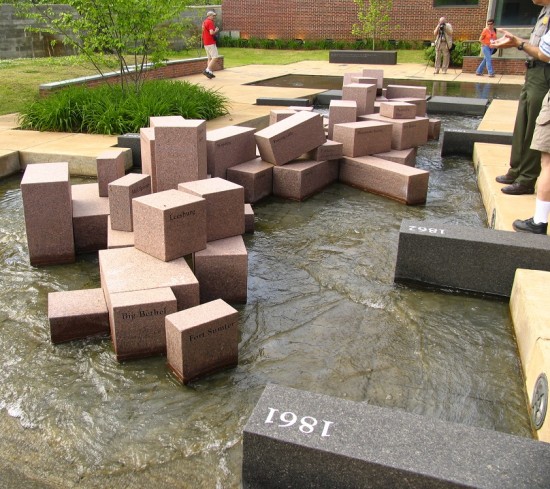 This city—which was still a small town in 1862—had the eye of the nation for the six month period during the Shiloh/Pittsburg Landing battle and the events that followed it. Adding it to the park allowed the whole story to be interpreted and told.

Six Civil War, bronzed soldiers, guide visitors into the 15,000 square foot Corinth Civil War Interpretive Center. The lifelike figures seem as if they’ve just come from the adjacent area of the Battery Robinett Union fortification, where the last of the bloody battles took place in October 1862, during the Battle of Corinth. Inside, a number of interactive exhibits and displays, along with full-scale reproductions of the earthworks, help modern visitors visualize the history.

The most impressive exhibit, however, is outside—the reflecting pool. While at first glance it seems to be little more than a shallow pool of water with granite blocks scattered randomly, it’s much more! The long row of blocks forms a timeline, taking us visually from the beginning to the end of the war, with each block representing the major battles. To make the impact of events even more significant visually, the size of the blocks indicates the numbers of casualties at the battles.

The self-guided Corinth Civil War Trail takes visitors through various related sites outside Shiloh National Military Park. For many visitors, the Corinth Contraband Camp is one of the most interesting, since it has been called the birthplace of freedom. 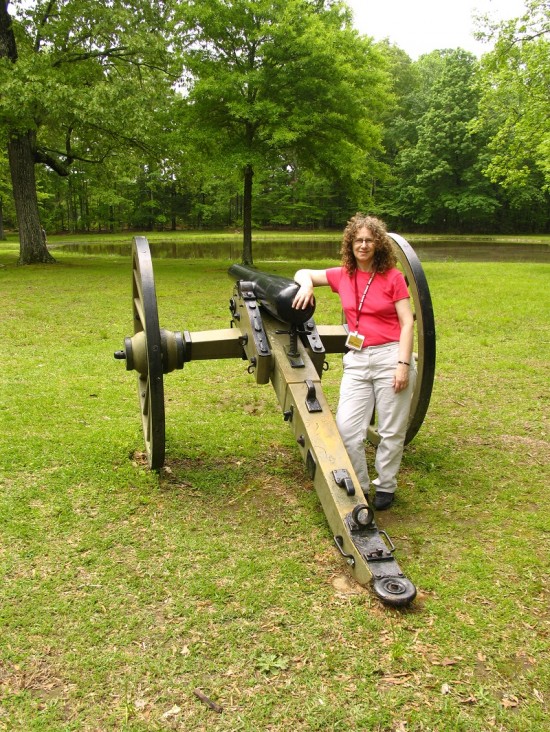 Linda Aksomitis in front of a canon at Shiloh Battlefield

In the months following the withdrawal of the Confederate soldiers from Pittsburg Landing and Corinth, many newly freed African Americans fled to join the Federal army. A “contraband camp,” created by Corinth, grew up to provide homes for the families left behind. By the summer following the area battles, the contraband camp was a community with its own church, commissary and hospital. Teachers from benevolent organizations arrived in the Corinth camp to teach everyone, young and old, how to read and write.

Residents, who numbered as high as 6000 at its peak, farmed 400 acres of land, with 300 acres in cotton they could sell, and 100 planted to vegetables for food. This model was used to establish other contraband camps around the south. The Corinth Contraband Camp attraction is on its original site, and contains an interesting collection of bronze statues that help interpret the lives of those who lived in the camp.

Some of the nation’s best preserved Earthworks just outside Corinth—Battery F and the Beauregard Lines—have been designated National Historic Landmarks. A visit to Battery F still shows the earthen walls that were constructed by digging a ditch and throwing the dirt up. Around this point in the war, generals had begun to realize that standard methods of close, direct armed contact resulted in enormous bloodshed and loss of both life and limb. With rifles having better aim and firing power, battle tactics such as the earthworks had to evolve.

Various other significant stops line the drive. The Trailhead Park, the strategic railroad crossing that cost thousands of lives to capture, is situated outside the Crossroads Museum. The Fish Pond House, Oak Home, and Rose Cottage served as headquarters for Confederate generals, while the Mitchell House was headquarters for General Grant.

There’s also a self-guided historical architectural tour through Corinth’s tree lined streets, showcasing properties that date back as far as the middle 1800s.

This article was first published in Heartland Boatingin April, 2010.