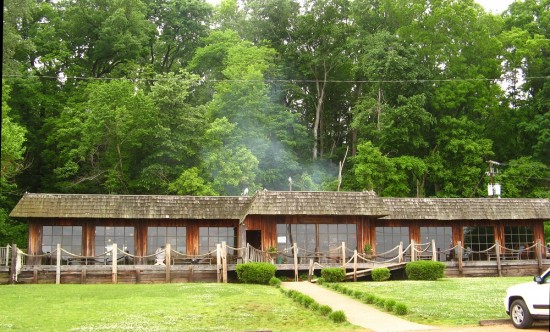 Catfish Hotel Restaurant on the Tennessee River near Shiloh, TN.

In 1825 Henry and Polly Hagy sailed their flatboat down the Tennessee River with a boatload of dreams and little else.

They hoped to start a farm and raise a family somewhere along its banks, if they could find the perfect spot. It might have been the view that drew them to this particular bend of the Tennessee or some other quirk of fate, but stop they did, setting a family tradition in place that would last for centuries.

The years passed as the steamboats chugged by on their run from Knoxville to Decatur, then back again. Henry and Polly’s son, John, built a log shack by the river to store goods in for shipping. Life on the Tennessee was calm until the outbreak of the Civil War, when the river became the fastest route to transport men and supplies. 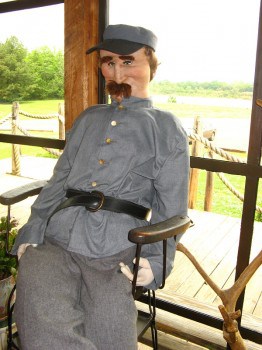 Riverboat captain greets you at the Catfish Hotel Restaurant outside Shilo, TN.

Confederate soldiers, under Generals Johnston and Beauregard, experienced one day of success, April 6, 1862, before pushing General Grant east to a defensible position on the river the next day, instead of forcing him west into the swamps according to their plan. Union soldiers occupied the Hagy cabin as they patrolled the banks of the Tennessee.

Time rolled on and the old cabin still stood. Even though it was the 1930s, a time of depression and drought, life on the river was good for the Hagy family. Norwin was a traveling salesman who knew everyone from near and far. His summer cookouts drew friends from up and down the river—catfish, hushpuppies and hospitality were always on the menu. When dark fell, a few inevitably didn’t want to put their boats back in to navigate the Tennessee in the dark.

Friends laughed, set up camp in the old cabin for the night, calling it the Catfish Hotel. The name stuck.

Norwin Hagy, with his many friends in the area, proved to be a great contact when Governor Gordon Browning was running for his second term. 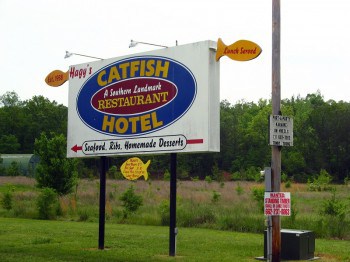 Happy to help his old friend, Norwin held a political campaign rally in the summer of 1938, serving up a meal of catfish right out of the Tennessee River and his own special recipe of hushpuppies. That was the beginning! With Browning’s encouragement and a lot of help from his wife, Dorothy, and two sons, Jack and Bob, the Catfish Hotel restaurant was established.

Business boomed at the Catfish Hotel and the Hagys had to add on to the original cabin several times to accommodate their customers. In 1975 the original structure burned to the ground, ending an era, but not the hospitality or fine food traditions. A new building was erected, opening a year later with Jack running it. Bob, meanwhile, started a hushpuppy plant about five miles away on Highway 22, known as Hagy’s Foods.
Today the restaurant is owned by a third generation, Jack’s children, and is managed by Barbara McAfee. She says, “I’ve been here over 30 years, I guess, since 1978. My husband, Joey’s, mom worked here as a server in the original building.” Joey and Barbara’s daughter, Christy, has also been part of the staff for fifteen years.

What’s on the Menu?

When I asked Barbara what drew most diners to the Catfish Hotel, she said, of course, “The catfish. It’s the only fish on the menu, plus we have ribs in our homemade barbeque sauce, marinated chicken, ribeye steak and more.” 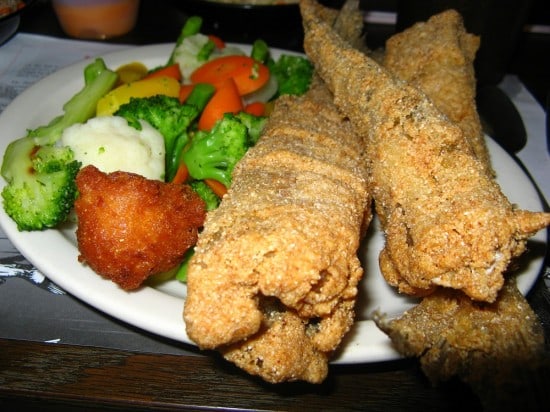 On my visit, I stuck with tradition and ordered catfish and hushpuppies, both of which were excellent examples of the southern cooking I always enjoy when I get near the Gulf Coast. I also loved the coleslaw, with its original dressing that added a touch of orange to the mix. When you go, if by some chance you still have a little room left after a feed of catfish (I didn’t!), there’s also a full selection of homemade desserts at the Catfish Hotel. From German chocolate to Jack’s Caramel pie, each recipe has been perfected by a member of the Hagy family.

On the Banks of the Tennessee

After a great meal, I love a little exercise, so despite the cloud covered sky I went for a walk to check out the riverbank that had lured the Hagys to stay so many years ago. 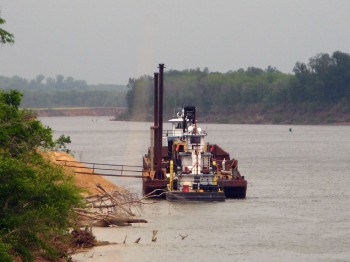 Tugboat on the Tennessee River.

A barge, still a common sight on the Tennessee, made its way around the bend towards me. Trees, mostly oak and redwood, grew right to the riverbank, so I had to walk down to the water’s edge to watch its slow progress.

An old metal staircase, which started nowhere and basically ended nowhere, made the descent to the rocky edge easy. I’d asked Barbara about a boat launch, but she said while they’ve tried to get one put in, there are just too many restrictions due to the river’s use for transport. While paddlers can pull their kayaks and canoes onto the shore, there aren’t any tie-ups available.

I also had to check out the cabin, which Barbara had told me was called Garfield’s cabin. Garfield had come to the Catfish Hotel back around 1920, when Norwin gave him a ride after he had walked away from a family that had been cruel to him. Norwin offered him a job looking after his parents, and then his children, so Garfield never left. Years later, when the cabin Garfield lived in was no longer needed, it was moved down to the riverbank rather than having it torn down.

It seemed to me hearing after all the stories about the many folks who’ve sampled the hospitality on this part of the Tennessee River, that once you stay a spell at the Catfish Hotel it’s hard to leave.

This article first appeared in Heartland Boating in the September, 2011, issue.