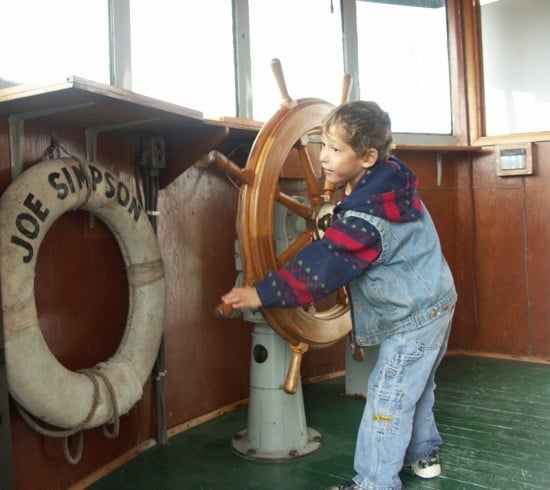 On board one of the ships in the Manitoba Maritime Museum.

Living on the Canadian prairies it’s odd that my grandson had a passion for big boats when he was small, but he did. So, imagine our surprise when we found a whole museum, The Maritime Museum of Manitoba, dedicated to them on our holidays one summer.

While parts of the prairies are arid, Manitoba’s Lake Winnipeg is the sixth largest freshwater lake in Canada, exceeding even Lake Ontario in size.

Decades ago it was traversed by steamships carrying freight and passengers. The Marine Museum of Manitoba, in the small community of Selkirk, just outside of Winnipeg, has collected some of these ships and preserved them for visitors to explore.

This was my grandson’s first chance to actually see the inside of a ship, although he’d already poured over illustrated books at school.

The S.S. Keenora is the oldest steamship in the collection, having been built in 1897. Inside, we were able to walk through all the decks, peering in everything from staterooms to the kitchen. 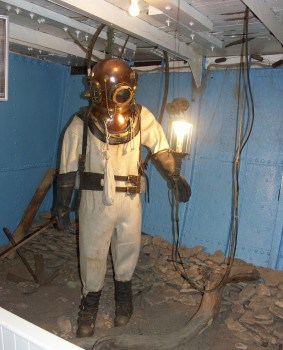 Early diving suit on display at the Manitoba Maritime Museum.

We were fascinated with the life preservers, which still hung on the walls, and at some of the displays that were added. A diver, using equipment nearly a century old, appeared behind glass, so we could imagine him in the water.

The Keenora, we learned, had travelled up to 15 knots per hour. It had carried many famous passengers, and even spent a season as a floating dancehall for a syndicate of Winnipeg lawyers in 1917.

The bunks we sat on in the staterooms weren’t luxurious by modern standards, but they had been enough for even the wealthy a century ago.

The museum is home to a storehouse of artifacts and records, as well as an 1898 lighthouse relocated from Black Bear Island, a hundred miles from Selkirk. Various other restored ships all form part of the collection and are open to walk through.

Last used as a government patrol vessel and ice breaker, the C.G.S. Bradbury was built in Selkirk and sailed Lake Winnipeg from 1915 to 1973. Its sturdy helm had once plowed through ice half a foot thick, taking doctors and medicine to a northern settlement struck by a flu epidemic.

Other boats in the collection are smaller, but have just as interesting of stories. The Chickama II sailed the smaller Play Green Lake, moving cargo and passengers from the Keenora to outlying areas.

The Lady Canadian was a fish freighter also used by Manitoba Hydro as a survey ship. 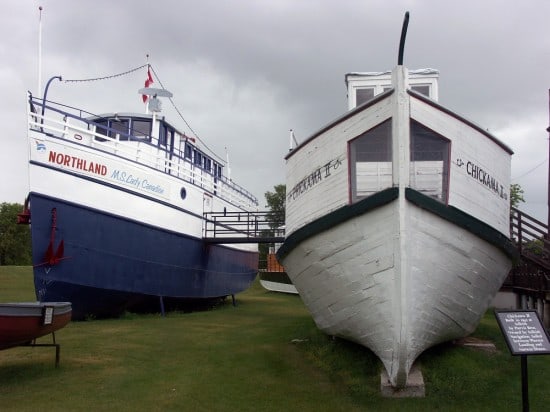 M.S. Lady Canadian and the Chickama II ships at the Maritime Museum of Manitoba.

My grandson and I enjoyed exploring the decks of each, examining their lifeboats, and taking our turns at the helm. We were thrilled to learn a piece of little-known history about our neighboring prairie province.

Visit the Maritime Museum of Manitoba