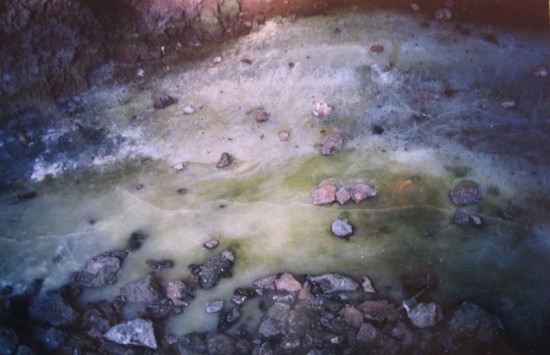 Inside the ice cave in New Mexico.

On  a recent getaway from winter’s cold and wailing winds, we headed to New Mexico to sample some of the desert’s attractions. Strangely enough, the perpetual Ice Cave, off Route #53, turned out to be one of our favorite stops.

Before we saw the “Fire and Ice” sign on the highway south of Grants, and decided to make a stop, I’d really only heard about ice caves through fantasy novels.

So, I was quite surprised to find that aboriginal peoples had been using these built-in refrigerators, or ice caves, for centuries in the desert.

This perpetual ice cave is on the Zuni-Cibola Trail at the foot of the Bandera Crater. The trail once served to connect the pueblos of the people along the Rio Grande River with the Acoma and Zuni people. The Zuni-Cibola Trail had two branches: the Navajo Trail and the Zuni-Acoma Trail.

Our first stop was the historic trading post, which not only provided us with our admission tickets, but also had fascinating displays of artifacts and contemporary Indian artwork.

The ice cave itself is 75 feet below the surface, so we had a fairly long climb down wooden stairs. My dad, who isn’t great on heights, and is a little wobbly on his feet, did manage them though by using the sturdy handrails.

We soon discovered that it was indeed very refrigerator-like when we reached the pebbly, ice covered surface at the bottom!

Much to my surprise, I found that the 20′ thick ice is greenish tinged due to Arctic algae–and enormous frozen icicles hang from the rocky cave ceiling to complete the icy scene. 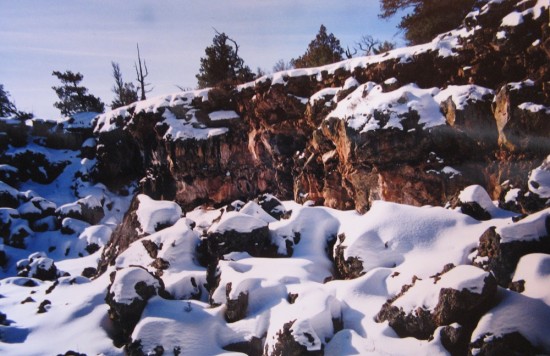 Rock formed from a volcano eruption at the Ice Caves and Bandura Crater.

This ice cave is in a lava tube, which some 10,000 years ago, when the volcano last erupted, had been the natural route to the surface for lava. In fact, we’d already seen the lava rock outside–even though it was covered with snow, it was easy to see that the dark chunks of jagged rock were very different from any rocks I’d seen before.

In minutes we were shivering, so it didn’t take long to remember why we had decided to visit the desert, and we headed back up into the warm February day to continue our adventure hiking to the Bandera Crater.

My parents decided not to take that hike, which really required a lot of exertion at the 8100′ elevation we had to climb to the lookout point, and the near 8400′ elevation to walk the rim of the crater. Since it had recently snowed, we slogged through snow nearly waist deep in some places for our look across the 1500 feet wide, 800 feet deep crater. The view, however, was worth the walk!