Cheap Travel: How to get across Canada on a budget!

To keep your travel in Canada affordable try camping or B & Bs for accommodations. Explore by region to keep transportation costs down. And check the many free and low cost activities.

From the sandy shores of Prince Edward Island to the cosmopolitan streets of Vancouver, Canada is ripe for exploring. Keep in mind, however, that Canada is a very big country. Taking the Trans-Canada Highway from its Eastern shore to Victoria, British Columbia, on the Western coast, tallies up to more than 6000 km or around 4000 miles.

For many travellers, a trans-Canada trip is a lifelong dream, offering the opportunity to enjoy the European charm of Quebec, the splendour of the Canadian Rockies and everything in between and beyond these destinations. However, for the budget conscious, you’re wiser to explore region by region to keep spending to the minimum and fun activities to the max. 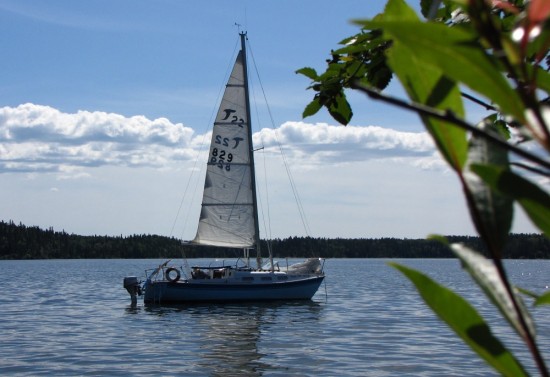 Canada is rich in outdoor beauty–you can fish, boat, or sit on the beach no matter which province or territory you visit. This photo is taken in Manitoba, at Amisk Lake near Denare Beach. Copyright Linda Aksomitis.

The reasons? Travelling across Canada isn’t necessarily budget-friendly. Travel anywhere these days is expensive, between the high cost of flights, fuel and other expenses, and Canada is no exception. Fuel in Canada costs around $4.50 per Imperial gallon (or higher), or if you’re comparing in U.S. gallons, $3.80 a gallon. So, you’ll need to keep costs in mind when you’re selecting transportation.

You’ll also need to keep local transportation in mind, when selecting a destination. Only the largest cities have anything but bus and taxi transportation in place. If you’re heading to Toronto or Vancouver, you can count on having commuter trains that move locals economically and quickly. However, in capital cities like Halifax or Winnipeg, it’s city buses only.

With some planning, though, and a few strategic decisions, you can have cheap travel costs on a trans-Canada trip and still see everything you want to see.

Travelling across Canada by train is popular, particularly in Eastern Canada, and undeniably enjoyable. Some rail services offer local tourism options and connections to some major cities. 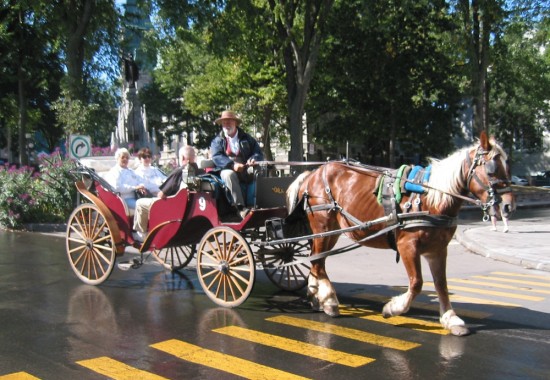 Take a carriage ride or walk  through the beautiful sites of Old Quebec and its 400 year old stone walls  in Quebec City. Photo copyright Linda Aksomitis.

While these trips are as close to all-inclusive as you’re probably going to find in Canada, they come with a high price tag; the fare for a week’s voyage can be several thousand dollars. here’s the link to Via Rail’s deals though, so if you’d like to try the train, check in regularly.

Train travel can be an economical option in Eastern Canada, but Via Rail across Western Canada is an expensive alternative and has limited access points. However, if Churchill, Manitoba, polar bear capital of the world, is on your itinerary, you can only visit by train or plane, and the train trip can be a huge part of the experience. Click here for the map of places trains go in Canada. Find the best deal, compare prices, and read what other travelers have to say at TripAdvisor about Via Rail.

Another option for making your way across Canada is by air. Domestic flights between Canadian cities are often very affordable. Or, if your destination is along the U.S. border, consider flying into the nearest major American city and getting a rental car with unlimited mileage. You win all around!

Finding a Cheap Place to Sleep 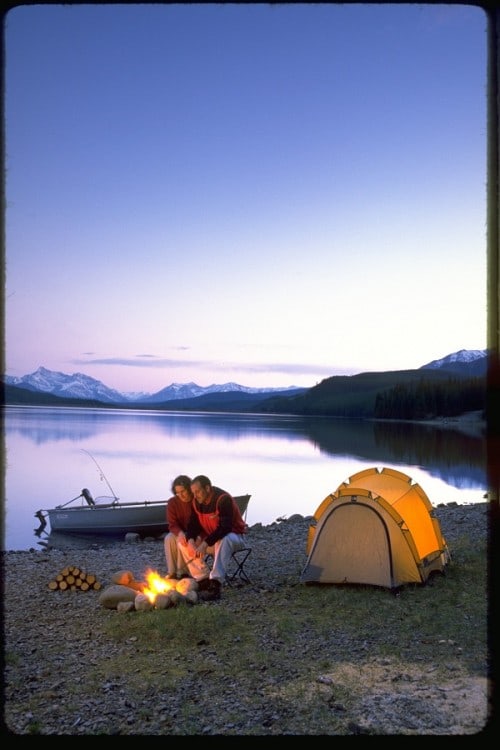 It’s a fact of travel: hotels that are cheap often aren’t centrally located and sometimes they aren’t even within major cities.

But if you’re trying to save money on your trans-Canada voyage, a major money-saver is to stay outside of the cities and drive into the city for day trips.

Hotel rooms in the suburbs, or even small towns, often cost a fraction of those in the city. Seek hotels that offer perks like free breakfast, or offer in-room refrigerators or kitchenettes. Buying and preparing your own food can save you cash.

There are also lots of B & Bs in Canada, which provide a range of options from basic in small communities to historic and luxurious in the big cities. Check out Canada’s B & B website here for listings in every province. Or Find the best deal, compare prices, and read what other travelers have to say at TripAdvisor on B & Bs in Canada’s most popular cities and destinations.

If you love the great outdoors, you’ll find Canada has thousands of campgrounds scattered throughout its ten provinces and territories, all providing a wide ranges of services. Look for private campgrounds, as provincial ones will have a park permit fee as well as a camping fee. In 2017, Canada’s National Parks are offering a free Parks Discover Canada Pass for the whole year, so they’re a great option too.

As well, cabins and cottages are an inexpensive alternative to to hotels, and are often found in or near National Parks. They’re usually situated in scenic areas, plus there are often inexpensive things to see and do nearby as they’re popular weekend getaways. Find the best deal, compare prices, and read what other travelers have to say at TripAdvisor about vacation rentals like these, or check out some of these listings on HomeAway.

Click here for a Canadian Campground Directory that will give you starting points for itinerary planning. If you’re travelling with an RV, you’ll find this Canadian site useful at selecting the right park. Click here for the Go Rving Canada search page.

Camping fees are much cheaper than other types of accommodations, plus you’ll get to see the star filled skies at night! 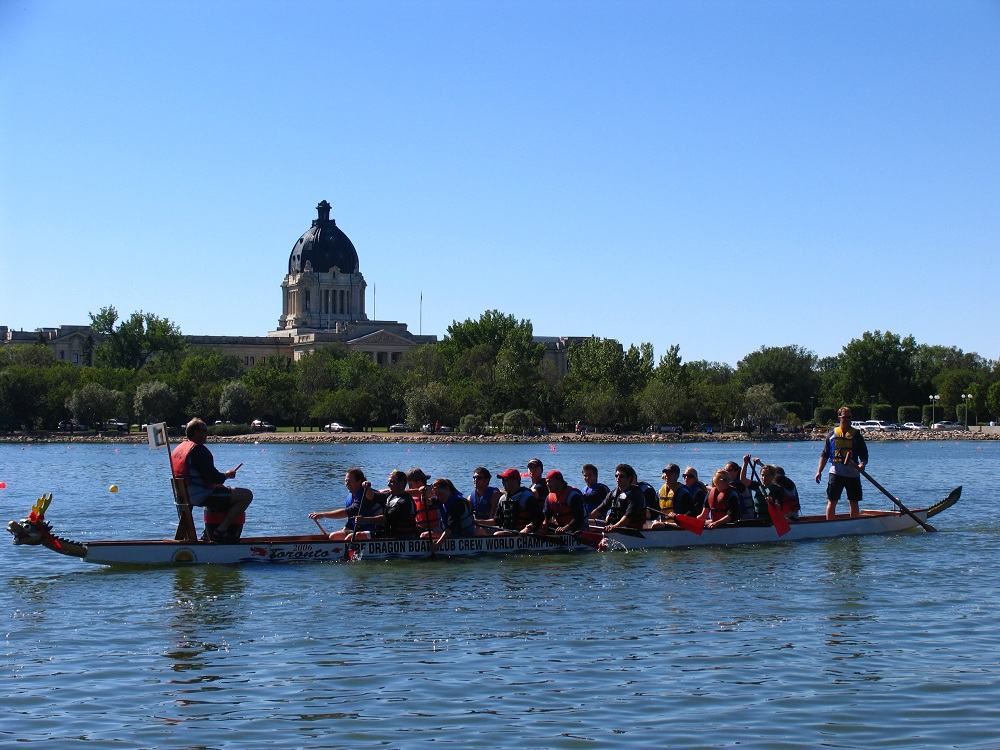 One of the best parts of traveling is experiencing the attractions and diversions in the cities you visit. But the admission costs of those activities can add up. If you’re making an extended trip, you might blow a significant part of your budget on tickets to see the sights. 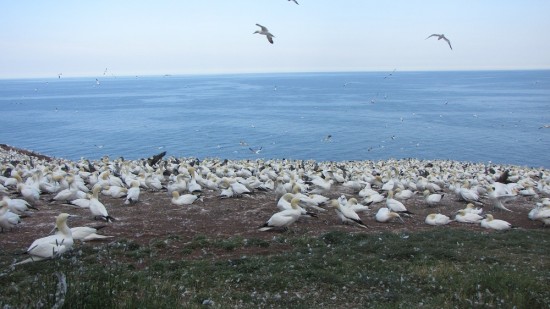 Before you set out on your trip, make a list of all of the sites you want to see and prioritize those that are most important. Consider package deals as well.

These outdoor activities are completely free and will give families a real taste of the great Canadian outdoors:

Most major cities also offer combination tickets or passes; if you plan to visit multiple attractions, purchasing a discount ticket might save you money. Don’t overlook free activities and local fairs — check them out this festivals in Canada site.

If 2017, celebrating Canada’s 150th birthday, is in your plans, check out this Canadian Government website of activities.

Travelling across Canada can be exciting and fascinating — but it can also be expensive. Cut costs and travel cheaply by planning your transportation and lodging effectively, and you’ll have the trip you’re hoping for and not go over your budget.

Amy Pacheco is a writer and photographer who has travelled all over the world. A committed bargain hunter, she is constantly on the lookout for travel deals.

Things to Do in Canada

The photo in the header was taken at overflow camping at Echo Valley Provincial Park in Saskatchewan’s Qu’Appelle Valley.