Boating up the Yukon River

Klondike Spirit Paddlewheeler
;
People have been paddling the Yukon River for as long as 25,000 years. In fact, it stayed as open water during the last ice age, providing an escape route from the frozen areas to the south. During the 1800s, it rose to importance once again as traders made their way into the north to buy furs from local trappers. 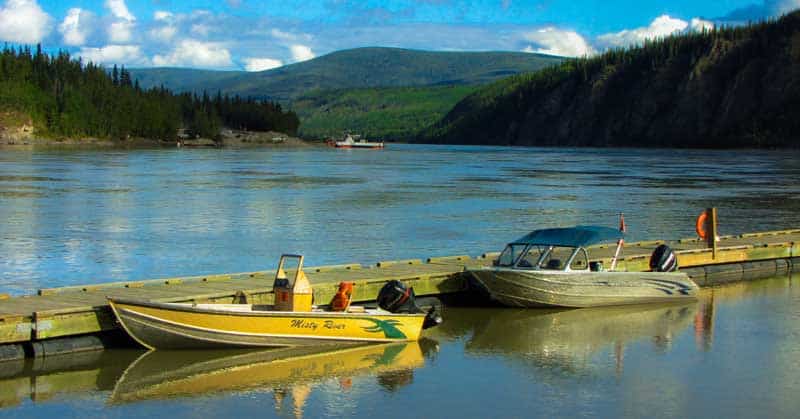 Steamboats on the Yukon River

The first steamboats — steamers — made their way up the Yukon River in 1869. They were a series of ships owned by the Alaska Commercial Company. They carried goods into the north, as well as traders.

Then, in 1896, gold was discovered! Some 7,000 boats formed a flotilla of dreams as prospectors and adventurers headed to the Klondike gold fields. Steamboats and paddlewheelers ruled the waters, continuing to provide transportation for decades.

On August 25, 1960, the Keno, the last commercial steamboat to operate under its own power on the Yukon River made its final run from Whitehorse to Dawson City. Today, it’s a National Historic Site in dry dock in Dawson City. 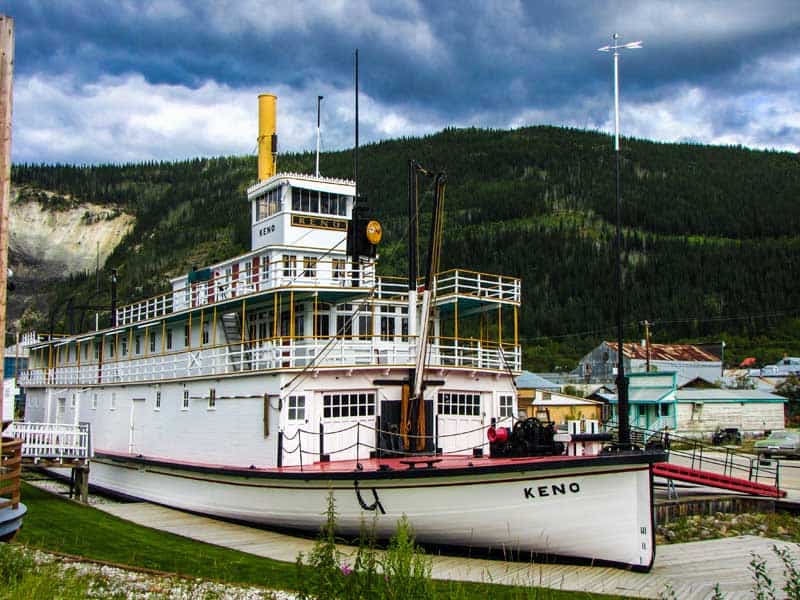 Riding on the Klondike Spirit Paddlewheeler

Every summer thousands of people head north to the Klondike to find out for themselves about the mysteries of this part of the Yukon. My list of things to do had included Discovery Days in Dawson City, the annual celebration of the discover of gold in 1896, panning for gold at the Goldbottom claim site, and seeing the glaciers of Kluane.

I’m all about history, and soon became caught in the spell of the Klondike Spirit Paddlewheeler on a dinner cruise down mighty Yukon, North America’s fifth-longest river. While the ship’s history is short — it was built and delivered to Dawson City in 2007 — it is an authentic recreation of a paddlewheeler. 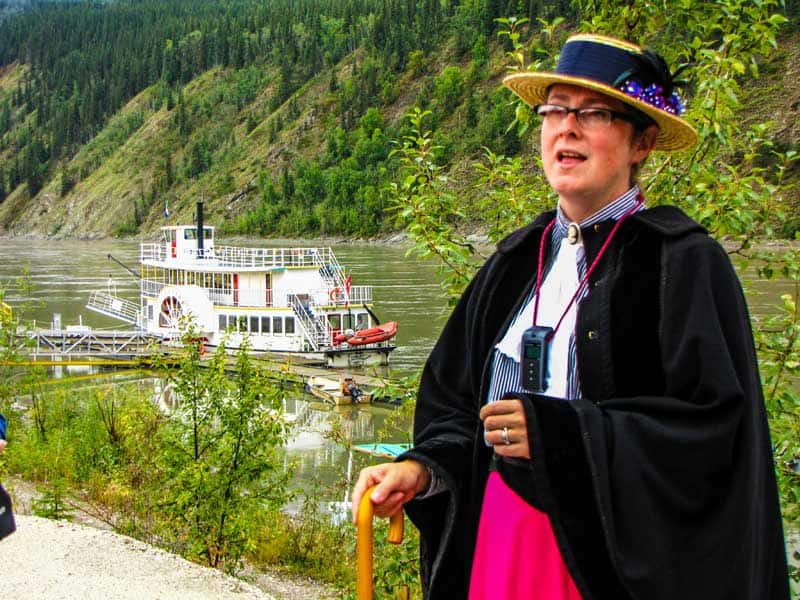 Tour guide talking about the arrival of minors during the gold rush – Klondike Spirit Paddlewheeler in the background.

Two great wheels, one on either side of the paddlewheeler, ploughed through the water, scooping and churning and spitting the waters of the Yukon River out behind them. The ship’s horn bellowed, announcing our passage to whoever might be on shore.

At that point, leaving Dawson City, the Yukon River is framed by mountains and sprinkled with wooded islands and a few tiny settlements, so it seemed likely most of the listeners are wildlife.

Before it reached Dawson, the river had been lazily rolling along on the hot August days through glacially carved metamorphic rock. In other words, it had nowhere else to go but on and on and on towards its final destination, the Bering Sea.

But for that one August evening, I was caught in the pull of history, as I listened to the water splashing and watched the landscape passing, much as it would have looked to those gold rush dreamers who’d traveled thousands of miles for the chance of making it rich.

Here’s a photo tour of my journey… 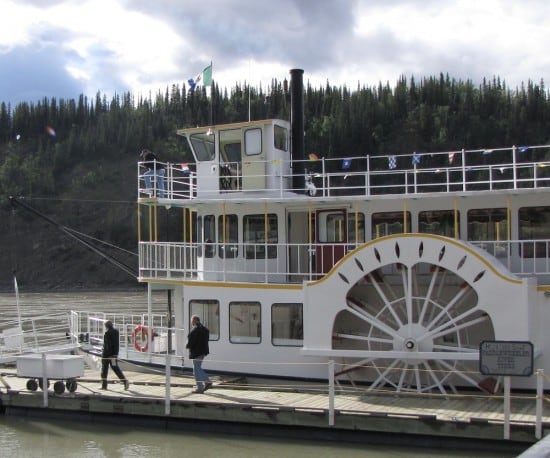 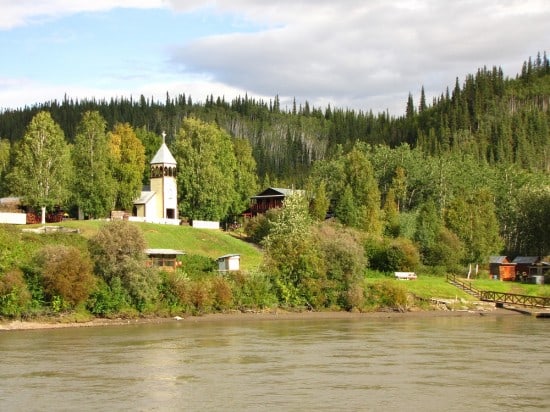 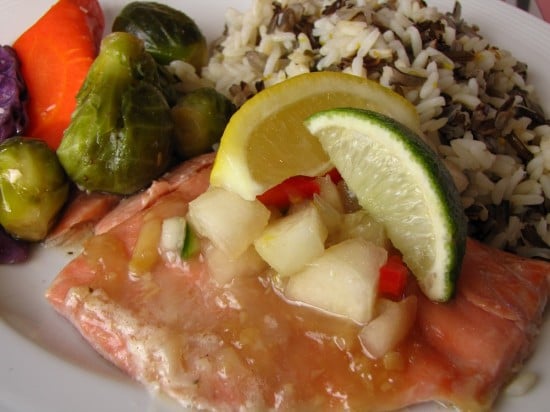 Salmon dinner on the Yukon River Dinner Cruise aboard the Klondike Spirit Paddlewheeler. 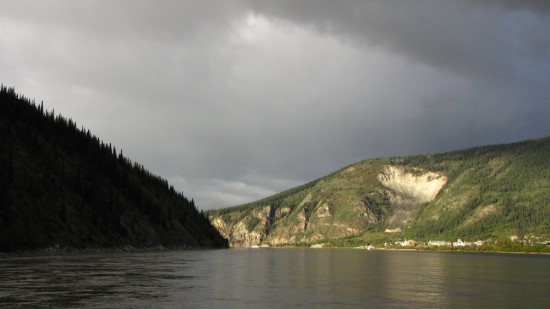 Storm rolling in over the Yukon River. 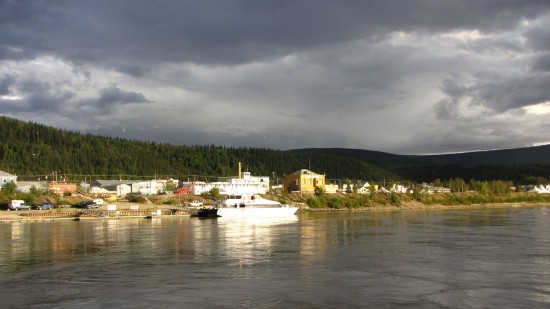 Dawson City under stormy skies as viewed from the Klondike Spirit paddlewheeler.

My adventures on the Klondike Spirit Paddlewheeler were part of a Yukon trip hosted by Travel Yukon.

More Things to Do in the Yukon

The photo in the header is of the Yukon Paddlewheeler on the Yukon River in Dawson City, Yukon, Canada. Photo credit: Linda Aksomitis