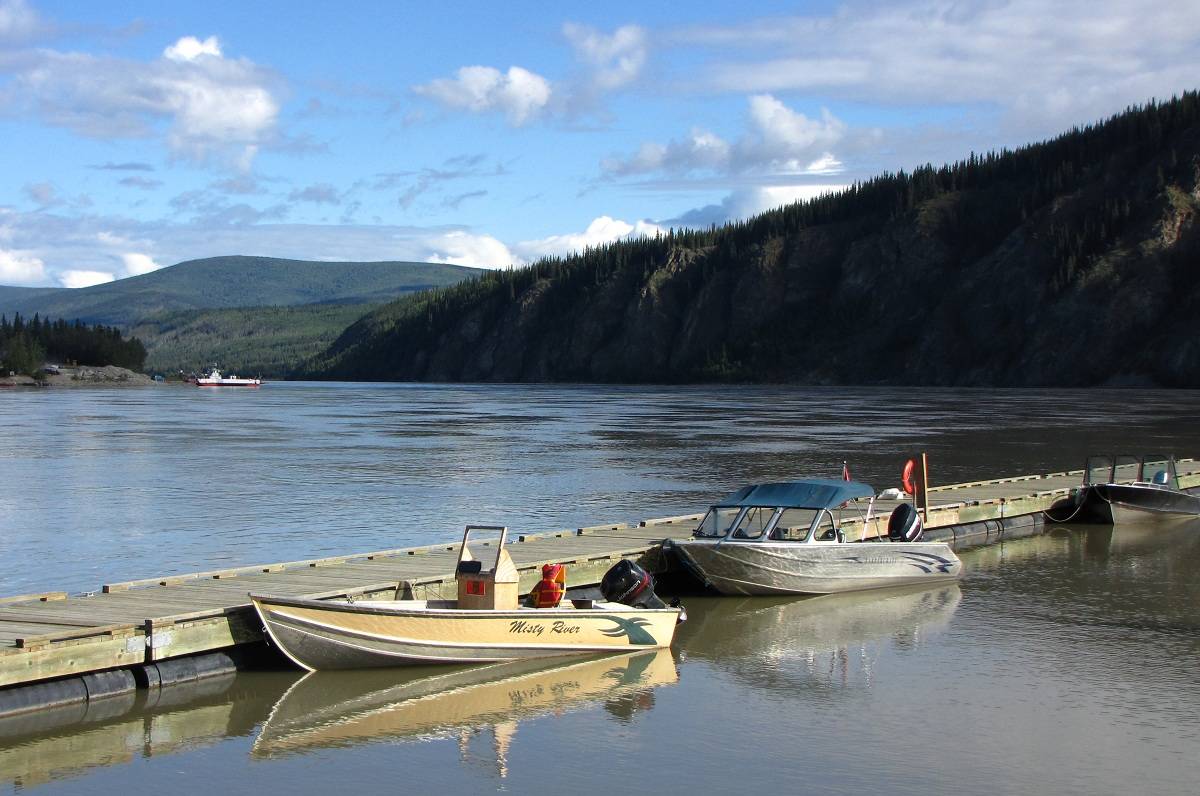 The Yukon River at Dawson City.

Canada’s Yukon Territory is one of the last great untamed frontiers. Its name comes from the Yukon River that flows for nearly 2000 miles through northern British Columbia, the Yukon, and Alaska.

The river has also been known as the “River of Gold” since it was the superhighway for thousands of of men, and a handful of women, who paddled frantically into the middle of the Klondike Gold Rush of 1898.

I wish I’d been there to see those first prospectors–the ones who struck it rich between the first discovery of gold at Rabbit Creek, near Dawson City, in August of 1896, and the Trails of ’98–that brought an international stampede of around 100,000 people!

Luckily for me, visitors can still experience the gold rush as I did during my visit to Dawson City’s Discovery Days. Just like those miners of old, I did some placer mining on my tour. What exactly is placer mining? Well, it’s that gruelling process of finding and extracting the gold nuggets from the mix of gravel and sludge on the creek bottoms.

Panning, which is what I got to do, is one way of finding the gold in placer mining. Luckily, placer miners can also use larger equipment to extract the gold too!

David Millar, of Goldbottom Tours, explains just how it all works in this video:

My Tour With Goldbottom Mining

My panning for gold adventure began on Front Street, Dawson City, where I registered for my tour with the Goldbottom Mining Company. From there, I hopped into a van with my driver and guide, young Rachel Millar, and other visitors from Quebec and Australia.

While Rachel navigated us through the rugged terrain to the family claim on the Klondike River, she told us stories about the places we were passing: Hunker Creek Road where there had once been a town, called Hunker City, of 2000 people, Paradise Hill, right on to Nugget Hill, where a cabin still stood.

The cabin, it turned out, had as colorful of a history as most places in the area. Over the years it had been used by the North West Mounted Police (NWMP), as a school, as a roadhouse (roadhouses were a day’s walk out for miners, with this location being #8 on the trail), and finally as a small museum for the tours. 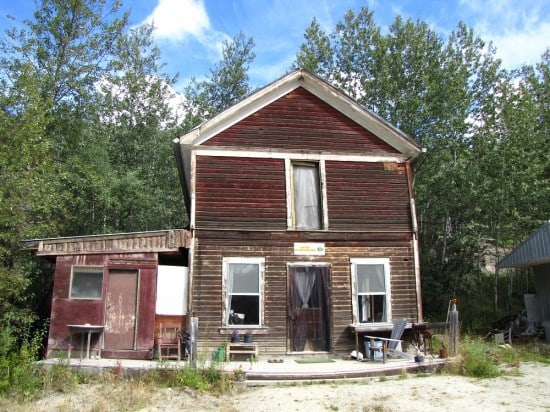 Historic building at the Goldbottom Mine Tours and Gold Panning site near Dawson City, Yukon.

Rachel was an amazing tour guide. Panning for gold for as long as she could remember, she answered all of our questions as she demonstrated the technique of gently shaking the hubcab-sized pan full of gravel, stones, and sludge.

We, of course, all got our own rubber boots and pans, so we could give it a try.

I was awkward at first, so my attempts were more like pouring runny cake dough with big raisins in it from side to side. Sticking your finger in to slush it around is against the rules too–just like with the cake dough, since your skin oils can come off as you’re poking around. 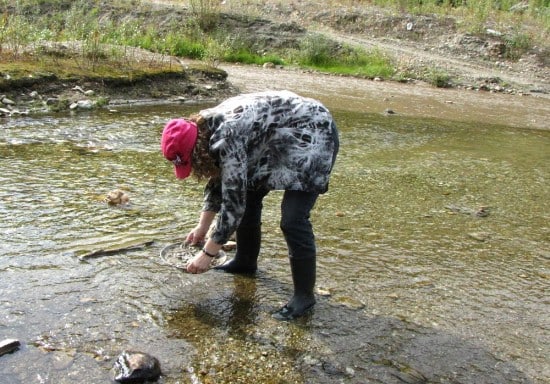 Linda Aksomitis panning for gold at Goldbottom Mine Tours near Dawson City, Yukon.

Eventually, I got enough of the gravelly stuff washed away so that only fine sand remained. Swish, swish, swish. Nope, no gold. After a couple of pans I straightened up and tried to work out the kinks in my back. I wondered then how those old timers had managed to find enough gold to even feed themselves with just their pans!

Two others in our group were luckier though, so Rachel put their tiny pepper-flake-sized gold flecks into vials of water for them to take home.

Like most of the 100,000 people who’d trekked across a continent more than a hundred years ago to pan for gold in the Yukon, I didn’t come away rich. I did, however, enjoy sharing the experience they’d all left family and friends and civilization behind to try.

Pan for Gold with Goldbottom Mine Tours

For full details on reserving your spot on a mine tour, see: http://www.goldbottom.com/