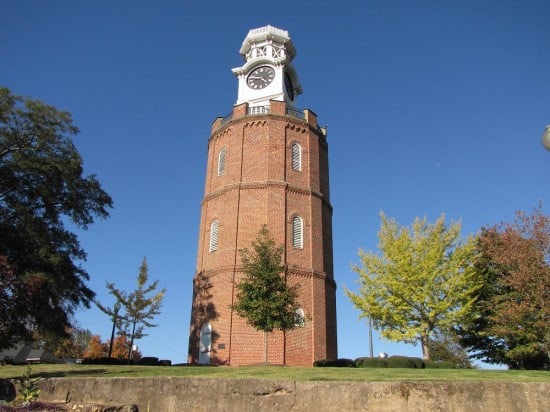 Some cities are pretty. Some are historic. Some are eco-friendly. Rome–Rome, Georgia that is–is all three.

The city of Rome is nestled, as is its namesake in Italy, between seven hills. The best view of them, I soon discovered, is from the top of Rome’s historic clock tower.

Everyone has been setting their time by this clock for over 140 years, since it arrived from Boston and was installed back in 1872. Inside, 107 stairs lead from what’s now a museum, to the top of the city’s first water tower.

You don’t have to be anywhere special to notice the chiming of its 32″ high bronze bell or to appreciate the majesty of the 104 foot high structure listed with the National Register of Historic Places. Anywhere in Rome will do.

Rome, Georgia, also has a statue of Romulus and Remus–an exact replica of the original that stands on Capitoline Hill in Rome, Italy–the legendary twin boys who were found and raised by a wolf, then founded the city of Rome. 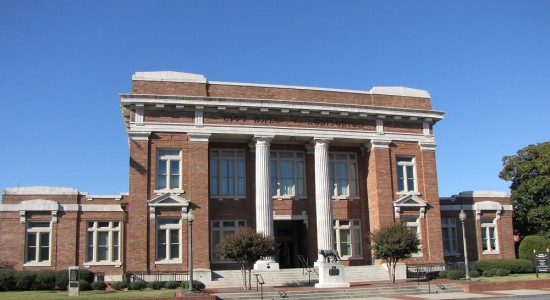 Statue of Romulus and Remus–located at the entrance of the Municipal Building of the City of Rome, Georgia

The statue was sent by Mussolini to the “New Rome” as a forecast of prosperity and glory back in 1929.

I discovered many other historic buildings just walking around in downtown Rome in the “Between the Rivers” Historic District. Way back in Rome’s history it had been a center for riverboat trade, which of course also made it a focal point in the Civil War. Sadly, General Sherman and his troops burned most of the city to the ground when he left in November of 1864 to march into Atlanta, so earlier buildings were lost. 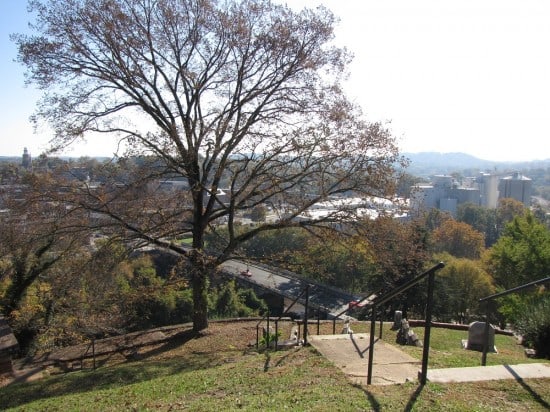 City of Rome, Georgia, viewed from the cemetery at the top of Myrtle Hill, one of its 7 hills.

Along with buildings, the Civil War took many lives. If you can’t get to the top of the clock tower to take in the panoramic view of Rome, follow the winding paved road to the top of Myrtle Hill, where you’ll find an historic graveyard that was the final resting place of over 300 who fought in the Civil War.

Twenty thousand people share this peaceful resting place–some having lived not-so-peaceful lives! These include the famous and the infamous, from Ellen Axson Wilson, First Lady of the United States, to John Wisdom, the Paul Revere of the South.

There’s even a a Mobile App Tour available to tell you 50+ stories of those who rest permanently on Myrtle Hill!

As well as hills, Rome, GA, also has rivers that run through it, although it has three, rather than two, like Rome, Italy. The rivers are the Etowah, Oostanaula and Coosa Rivers, all of which take their names from the Cherokee heritage of the area.

Luckily for residents and visitors alike, the city of Rome is very eco-friendly and encourages everyone to enjoy its hills and rivers close-up with a hiking/biking trail system in its beautiful downtown.

The Heritage Park Trail takes full advantage of the rivers, linking two paths at the confluence of the Oostanaula River and Etowah River, where they meet to form the Coosa River. 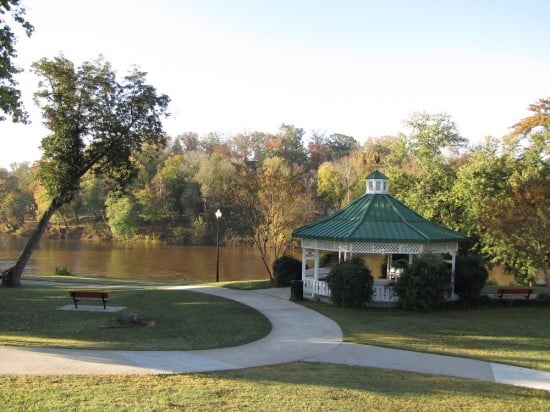 Put Rome, Georgia on your list to visit this summer or fall–you’ll enjoy it!