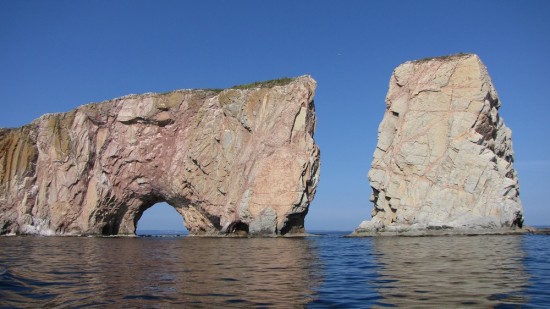 Percé Rock (also known as Rocher Percé) is a giant monolith off the GASPÉ PENINSULA, 750 km east of Québec City in the province of Quebec.

Like other Canadian kids, I studied Quebec’s Percé Rock in school. Then, it was an odd formation–a rock with a big hole in it–but still, it looked interesting, like Poseidon or Neptune had come along and shot a giant hole through it.

Once I started traveling as an adult, I became even more fascinated, and hopped on the first opportunity that took me to visit the Gaspe Peninsula in Quebec and Percé Rock.

On arrival, I was thrilled to find a perfect view of this Canadian iconic landmark from where I was staying at the classy Hotel-Motel Le Mirage in Percé. My afternoon tour boat in the Gulf of the St. Lawrence Seaway, however, got me a lot closer to what’s considered to be one of the largest and most spectacular arches in the world.

Even more amazing, however, is that this limestone cathedral with a hole through it is around 400 million years old, judging from the marine fossils scientists have found.

The sight took my breath away.

Our cruise set sail from town, headed past Percé Rock towards Bonaventure Island, which together form the provincial Parc national de l’île-Bonaventure-et-du-Rocher-Percé, created in 1985.

Hundreds of years ago a fishing port for the colony of New France, Bonaventure Island is now famous as one of the  largest bird sanctuaries in the world with over 280,000 birds of up to 223 various species including Northern gannets, Atlantic puffins, Black-legged Kitiwake, and other sea birds. 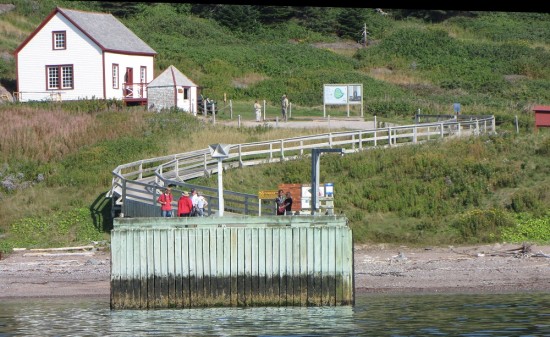 Landing dock and historic buildings on Bonaventure Island in Quebec.

It was originally designated a bird sanctuary by the Canadian Federal government nearly a century ago, back in 1919. In 1947 the newly created Dominion Wildlife Service took over care of the sanctuary, along with sixty-six other migratory bird sanctuaries across Canada. This service eventually became the Canadian Wildlife Service, which celebrated its 65th anniversary in 2012.

Bonaventure Island is roughly circular and quite tiny–just over 4 square kilometres or 1.6 sq miles in total area. Its sides are steep and craggy, so when we approached, the huge splattering of birds looked like bits of white dropped into the sides of a chocolate iced cake! 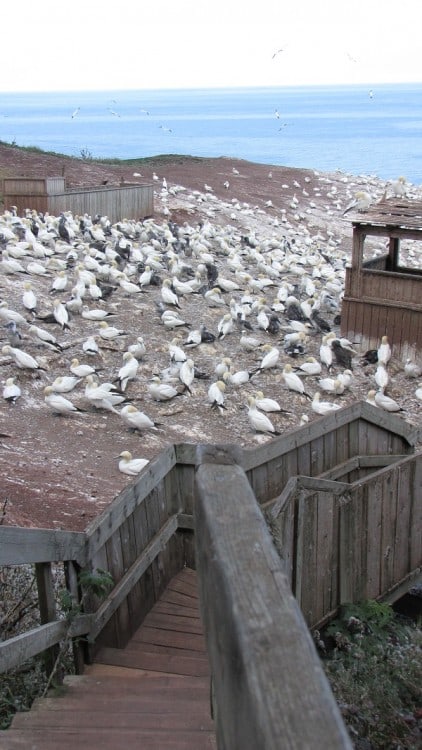 After we landed, I did a quick tour of the historical park buildings, then was off on an hour hike across the island to visit the world’s largest nesting grounds for the gannets—some 60,000 couples mate and raise their young annually on the island’s rocky shores.

The hike was uphill, and being a prairie girl, I’m not all that experienced with steep climbs. I needed quite a few breaks enjoying the beautiful forest around me through what should have been an easy hike!

I grew up on a farm, and on that farm we had chickens. Chickens that flapped their wings when you opened the hen house door, chickens that pecked at your feet if you stood too long in one spot gathering eggs, and above all else, chickens that stank.

The gannet colony smelled like one humongous outdoor chicken house!

I must admit, however, that other than smell, gannets were nothing like chickens. The sleek white birds, with tan necks and black tail feathers, spread out before me in a mass I was only used to seeing during migration at home.

Startled by our approach, some lifted, launched into flight over the sea, circled, then came back to settle in with friends again, while others engaged in a ritual of flapping and mutual pecking at one another.

I was happy to sit for the next hour and watch these incredible birds in one of the world’s largest sanctuaries until it was time to make a mad dash across Bonaventure Island for the last tour boat of the afternoon.