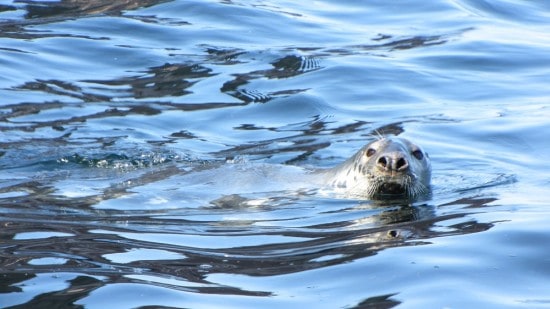 Seal in the water of the St. Lawrence Seaway in Canada.

The young seal bobbed in the water like those appendage-less Little People bathtub toys my kids had played with when they were small. Up and down. Down and up.

Invisible hands patted the animal’s dark head and it disappeared beneath the water, only to pop up somewhere else. The seal’s face, black with light freckles, wore a childlike expression of intent curiosity.

No matter how many times I’d watched seals on Animal Planet, I wasn’t prepared for the reality of seeing this young one floating all alone in the dark blue sea of the Gaspé Peninsula.

Behind me, Suzie, my sea-kayaking partner from Le Québec maritime, who were my hosts on this trip, stopped paddling. “I think he’s here…under us,” she said.

My paddle halted in mid-air—I didn’t want to whomp the poor little seal, even if he seemed to be taunting us in a game of hide-and-seek through the waves. 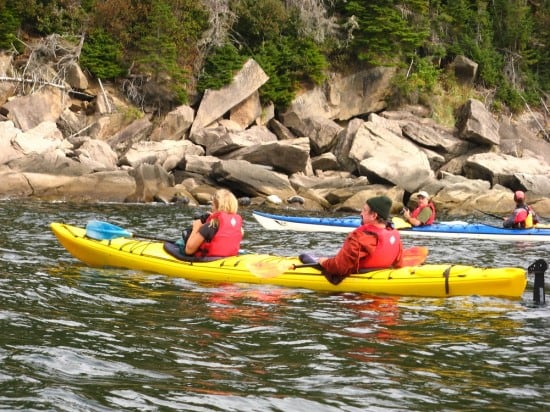 Sea kayaking with Aube Aventure at Cap-aux-Os, just outside of Forillon National Park in Quebec.

Anne called from the kayak next to us, “He’s over here now!”

While I hadn’t expected to be kayaking with seals, I soon learned the gray seals are common in Quebec’s Gaspé area, especially where we were in the Cap-aux-Os sector with Aube Aventures.

This young one, up close, had a personality and was more beautiful than the mature seals I’d seen sunning themselves the day before on the ship’s cruise to Bonaventure Island. Reaching a weight of up to 350 kilograms, the large males had seemed to be just rectangular blobs of darkish flesh flopped lazily over rocks to bake in the sun.

A sudden lurch of the kayak, however, soon reminded me to get paddling because a storm was rolling in across the darkening sky—how different this September seascape was to the golden waves of grain fields I’d left behind at home in Saskatchewan!

Behind me, Suzie chanted, “Left, right, left right,” in an effort to help me maintain a steady rhythm. While the Qu’Appelle Valley is only a few miles away from me, at home I’d never pursued any type of water sports—can’t even swim. So what was I doing in a sea kayak? Well, adding another experience to my to-do list–sea kayaking. 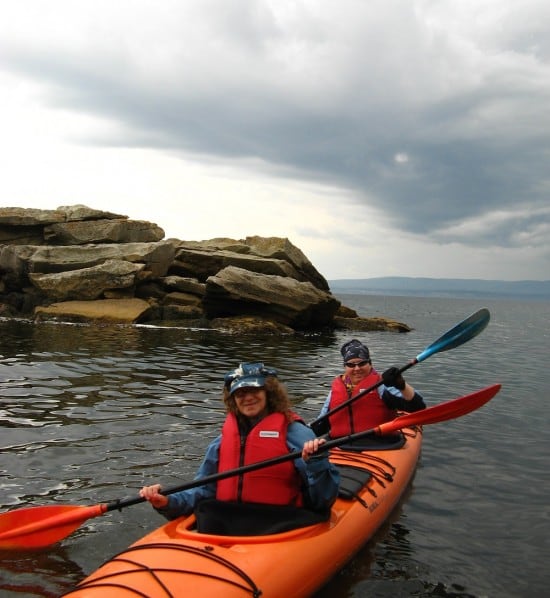 Linda Aksomitis and Suzie Loiselle sea kayaking in Gaspe, Quebec, with Aube Aventure at Cap-aux-Os, just outside of Forillon National Park. Photo by our guide!

Indeed, the little kayak rocked as we paddled through the waves, giving me a whole new experience as I’d previously only paddled in calm waters. Each stroke brought us closer to shore.

Who would win? Suzie and I or the heavy dark clouds racing overhead. Racing, I was sure, directly for our kayak so they could pull out the plug and drench us.

Left, right. Left, right. Thank goodness I had the rhythm down a little better, which was a good thing as Suzie would have had to shout for me to hear.

The shore loomed ahead. But with it, I had another fearful thought. How exactly were we supposed to stop?

Luckily, our guide paddled in first, and walked out into the water to help us slide flawlessly onto the sandy shore without damaging the kayaks, or dumping ourselves into the waves that rolled on by.

Getting out of the apron on a sea kayak proved to be interesting. I managed to undo the snaps, grab my camera bag, and climb out with all the grace and coordination of a year-old-child who’s halfway between crawling and walking independently. Oh well. The rain hadn’t started yet, so I’d won that race!

We all rushed for the yurt as the raindrops started to fall. Lunchtime and I was hungry! 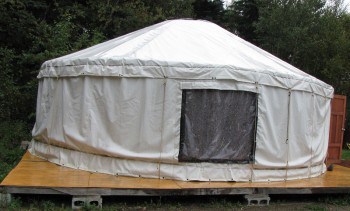 Yurt in Quebec with Aube Aventures

You can have an adventure with Aube Aventures too with this YouTube video!