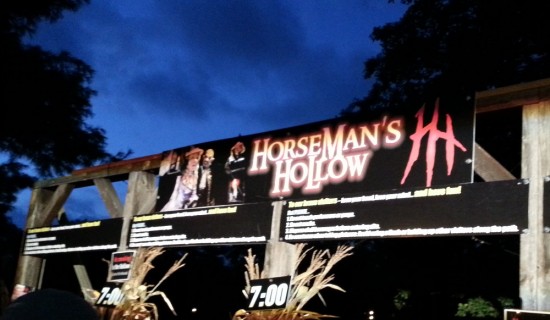 The legend of Sleepy Hollow, with the image of the headless horseman galloping through the night, has the ability to give us all a bit of a shiver at Halloween–even when we’re grown ups.

I’ll admit, as will most folks I know, that things that go bump in the night can be a lot of fun. This year on my October fall foliage tour down the U.S. east coast, I found out just how much!

Philipsburg Manor, like the not-so-sleepy town of Sleepy Hollow where it’s situated, takes on a whole new image and persona for 13 nights during September and October. In fact, the “inhabitants” who come to life here are definitely from the nether regions of the imagination.

The evening began with a line-up as all great things seem to, but this one contained a few interesting characters I don’t usually encounter!

Once my newfound friend, the wonderfully costumed and made-up witch in the photo below, had passed through the gates into the Hollow, I began to mentally prepare myself for the adventure. It had been years–sixth grade in fact–since I’d embraced much in the line of spooky Halloween fun. 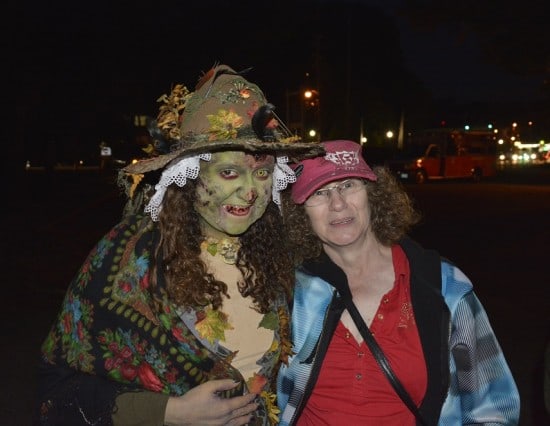 Linda Aksomitis with a witch at the Horseman’s Hollow event in Sleepy Hollow, New York.

Back then, some of the older kids had prepared a Halloween event in the basement of the Town Hall, where several grades were temporarily being housed while our new school was being built. It was a dark and damp and musty place, long unused and mostly full of junk.

One at a time, we oh-so-mature sixth graders were blindfolded and taken down the plank stairs. Our guides, though older, weren’t above giggling–even cackling–as they led us to our fates.

I heard the creak of hinges–I’d already seen the empty basement jail cell that hadn’t held any prisoners for a few decades so knew where the sound came from, and smelled some obnoxious odors that took my breath away.

Someone took my hand. Plunged it into something soft and slimy and squishy. That was my undoing!

I screamed. Ripped off the blindfold. The boys, of course, were doubled over in laughter as I stared at them and the gooey insides of the pumpkin still clinging to my hands. It didn’t help that I was costumed as a pumpkin either. I was mortified. 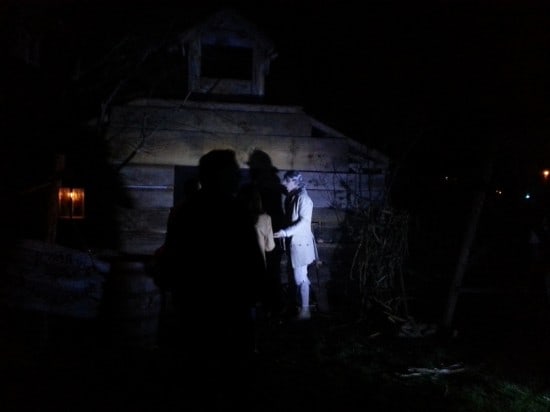 One of our encounters in Horseman’s Hollow as we made our way along the dark path.

But anyway, suffice it to say I wasn’t altogether sure that nearly 50 years later I was ready to put myself through this kind of ordeal again.

Backing out, though, wasn’t an option because that’s not what grown-up travel writers do.

There are just three rules in Horseman’s Hollow. The first is don’t touch any of the inhabitants–I guess they’re worried about undead soldier body parts falling off, or perhaps guests tumbling to the ground when they touch a ghost that’s just a specter instead of flesh-and-blood body.

The second rule was pretty commonplace. No flash photography. Luckily, I hadn’t even figured out how to turn on my smartphone’s flash yet, so that was easy.

And the third was simple too. Keep moving no matter how scared you are! There’s only one way through Horseman’s Hollow and it doesn’t have any detours or shortcuts or magical ways to reappear at the other end.

Okay, it took me about six steps to break the first rule. A ghostlike apparition appeared in front of me in the dark and I reached out to move it off my path–after all, I was going into this adventure much braver than I’d been back in sixth grade. 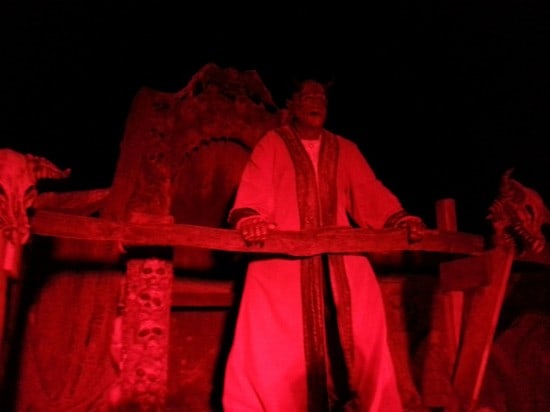 A demon in Horseman’s Hollow.

The ghost shook its head and waggled its finger in a no-no sign I’d seen more than once when I was back in sixth grade. My hubby shook his head and muttered, “What is there about rules that you don’t get anyway?” Oops.

I felt foolishly brave by this point. Hey, they were all just actors anyway, right?

We walked on over rough ground that made me stumble, past objects I couldn’t make out in the dark, even through maze-like constructions where I twisted and turned in what I guessed by the smell to be a corridor of cornstalks. By then I was pretty confident.

As with all things, pride goes before a fall.

I’d become accustomed to all of the inhabitants of Horseman’s Hollow appearing helter-skelter along the path: ghouls, demons, vampires, witches, undead soldiers, and a few others I couldn’t quite identify in the blackness of the night.

Then, my breath caught in my throat, my heart stopped, and I screamed!

I was back in sixth grade. Only I didn’t have a blindfold on–so I had to squint in the dark. One image I’d thought was just a cut-out had suddenly leaped out in front of me. I heard that old familiar laughter, only this time the older boy was my husband.

The walk through Horseman’s Hollow lasted somewhere between five minutes and five hours–I have no conception of time when it’s night and I’m taking on a fifty-year-old challenge to myself to be brave. But I wasn’t the only grown-up that night who got to relive some of the fun I’d had as a kid. There were hundreds of us enjoying a Halloween scare!

Have Some Halloween Fun in Horseman’s Hollow

Horseman’s Hollow is set-up in the historic Philipsburg Manor in the village of Sleepy Hollow. There’s not a lot of parking near the event, so we parked in a parking lot a number of blocks away and walked.

For full details on the event and how to purchase tickets see: http://www.visitsleepyhollow.com/things-to-do/horsemans-hollow

While in Sleepy Hollow we also visited Sunnyside, Washington Irving’s home. You can read about it at: http://guide2travel.ca/2013/10/the-legend-of-sleepy-hollow-october-foliage-tour-of-sunnyside-washington-irvings-home/

Stay at the Tarrytown DoubleTree (we did!), conveniently located just over a mile from Sleepy Hollow – http://doubletree3.hilton.com/en/hotels/new-york/doubletree-by-hilton-hotel-tarrytown-TERHIDT/index.html

Our thanks to Westchester County, New York, http://www.visitwestchesterny.com/, DoubleTree by Hilton Tarrytown – http://doubletree3.hilton.com/en/hotels/new-york/doubletree-by-hilton-hotel-tarrytown-TERHIDT/index.html, and Historic Hudson Valley – http://www.hudsonvalley.org/, for making our visit possible.