At a population of around just 75,000, Albany, Georgia, is a small city—however, there’s a lot more to Albany than meets the Eye. Not every downtown has a river flowing through it—especially one as scenic as the Flint River.

The nearly 350 mile long river (actual distance is 212 miles, but the river twists and turns) rises in central Georgia as groundwater seepage, flows under the runways of the Hartsfield-Jackson Atlanta International Airport on a course that washes over the red dirt of rural Georgia, with its waters eventually ending up in the Gulf of Mexico.

The Flint RiverQuarium provides a lot of information about the Flint River that flows through Albany, along with hundreds of species native to the area.

Alligators, several species of turtles and various other creatures enjoy the well developed natural habitat of water, plants and trees that viewers see through tall glass walls. The 175,000 gallon Blue Hole features more than 100 kinds of fish and creatures native to Southwest Georgia. Inside, displays provide information on the ecology and history of the Flint River and its waters. 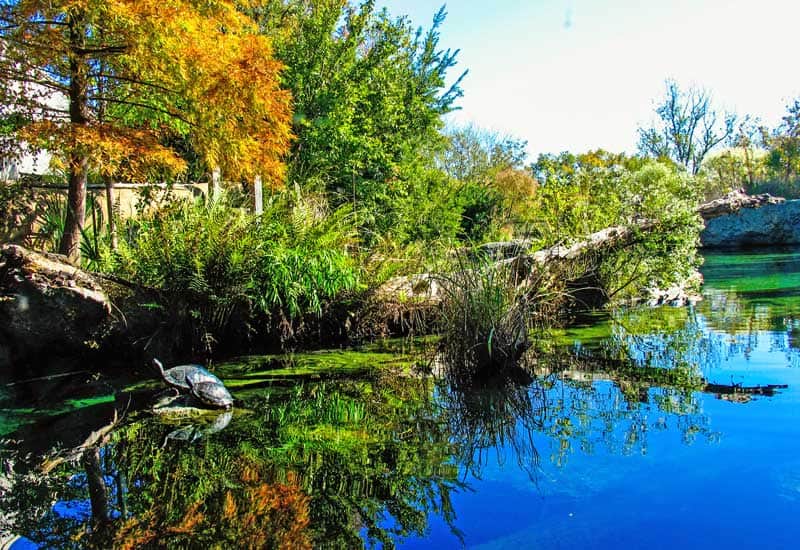 Although Albany is a small city, their RiverQuarium is anything but small in either size or stature. One of the few open-air aquariums in the world, it’s a must-see in Georgia.

Next door to the Flint RiverQuarium is the Adventure Center, which houses the Imagination Theater. Gazing up at the screen, which is three stories tall and four stories wide, it’s easy to see where the theater got its name! The theater hosts a variety of shows, many of them nature based and often in 3D.

Even if you’re not a librarian–as I’ve been–you should take a few minutes to visit Albany’s Carnegie Library. The project began back in 1904, when locals petitioned the local government to institute an annual tax to pay for library services.

That fund, along with $10,000 donated by Andrew Carnegie, was enough to create the impressive building that’s still in use. On March 1, 1990, the building was placed on the National Register of Historic Places. The great thing is that it’s always free to get into a library! 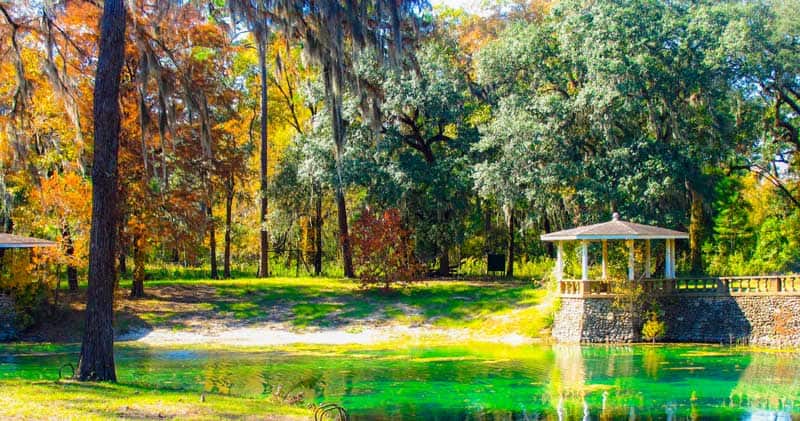 Radium Springs, just a few miles south of Albany, is the largest natural spring in the state and listed as one of the “Seven Natural Wonders of Georgia.”

The deep sapphire blue waters of Radium Springs flow at 70,000 gallons per minute, maintaining a year-round temperature of 68 degrees that provides a cool summer home for landlocked Gulf striped bass.

Back in the 1920s when springs were attributed with solving all natures of health concerns, the springs were home to the huge complex of the Radium Springs Casino and Swimming area. As economic times changed, so did the popularity of the area, so it opened and closed a number of times. Two major floods in the ’90s destroyed much of what had survived.

Radium Springs Gardens, a botanical garden created on the historic site, opened in 2010. Currently the spring and the creek, which flow into the Flint, are part of a spectacular 95 acre cypress swamp landscape including the old ruined promenades, walkways and walls. 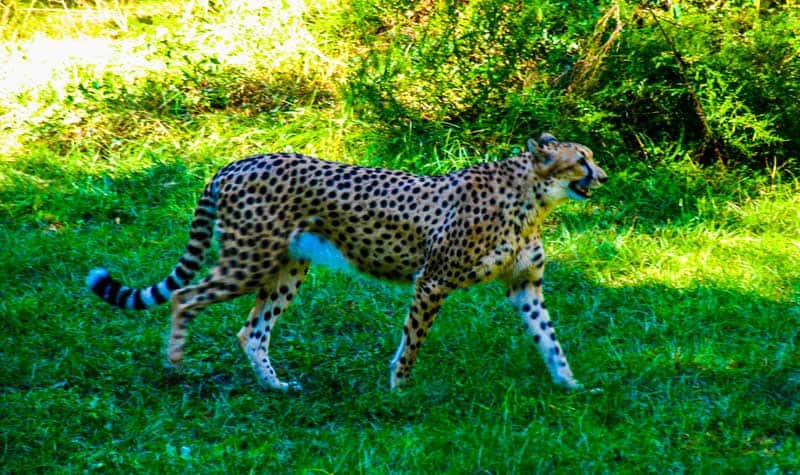 The Parks at Chehaw takes visitors not back in time, but rather out into the natural world. The 100-acre, AZA-accredited zoo is just a part of this 800 acre park.

Home to cheetahs, bobcats, zebras, black rhinoceros, bears, bison and much more, the zoo is a great way to spend half a day! There are also campgrounds, golf, picnic pavilions and more.

Owned and operated by the Georgia Power company, Lake Chehaw (formerly called Lake Worth) is a 1400 acre reservoir at the confluence of the Kinchafoonee and Muckalee Creeks with the Flint River at Albany. 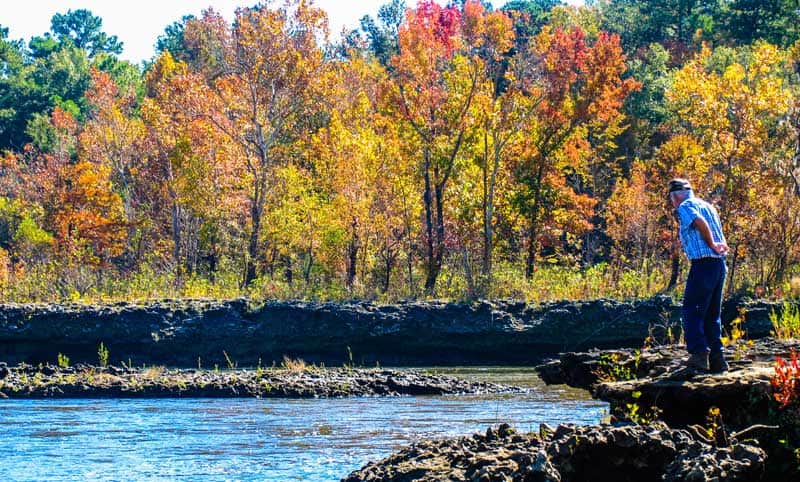 Three ramps provide public access to the lake, which is open for fishing. Shoal bass, native only to the Flint, Chattahoochee and Apalchicola river systems are popular catches, with the average size of a pound or two, although up to six pounders have been pulled.

Channel catfish are considered the most consistent fishing action, with channel cats up to two pounds and flatheads up to eight. During spring spawning some crappie can be caught, and there are also some bream and bass.

The lower Flint River is popular for both floating and fishing, although water levels vary because of its shallow aquifer discharge, making the area through Albany too shallow for larger boats to navigate the shoals. 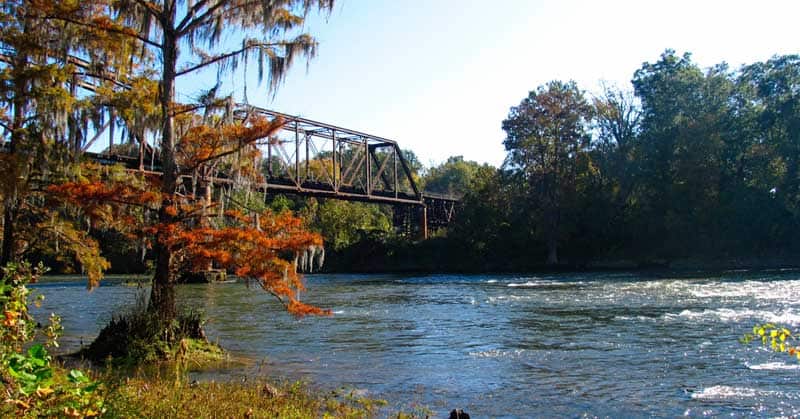 Atlantic Coast Line bridge over the Flint River in downtown Albany was built by the American Bridge Company in 1929.

Like Lake Chehaw, fishermen find “shoalies” a popular catch on the Flint. These shoal bass make their homes in the rocky shoals and pocket water around the city, and can be caught spring through fall.

Largemouth bass inhabit the slower moving reaches, while the Redbreast sunfish are found in moderate to swift currents near the shoals. Bluegill and Redear sunfish are commonly found bream in the Flint.

Legendary Blues singer, Ray Charles, was born there, so it’s no surprise that the city has honored him during their downtown revitalization. 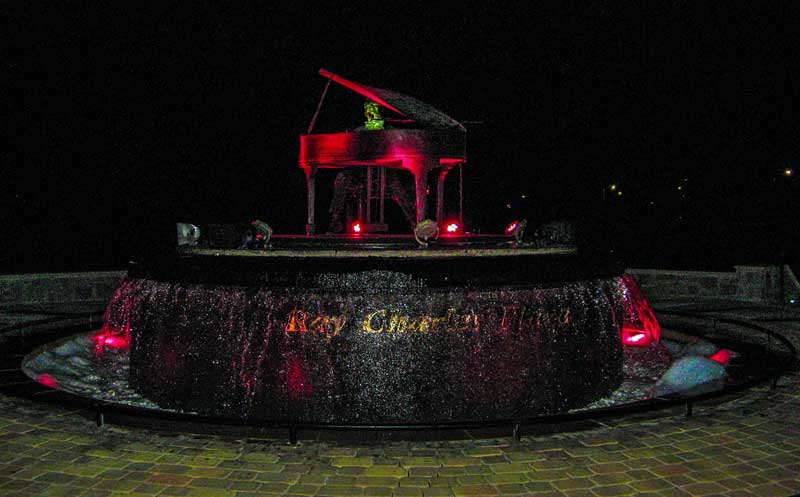 The Ray Charles Plaza is situated on Front Street, near the Albany Visitor Center. At night the mound, with its life-size statue of the musician playing his piano, is enfolded in lights that alternate through shades of blue, gold, red, and purple. As if the light show isn’t amazing enough, his music drifts through the park on the loudspeaker system.

Front Street, as you might expect, runs along the river, just as it did back in 1836 when Nelson Tift, a businessman, settled the area. At that time cotton was the key crop, and it was easily transported by riverboats on the Flint. Tift, seeing the potential for income, had Horace King, a former slave, build a toll bridge over the river in 1858.

Thronateeska Heritage Center, which takes its name from the local Creek Indian word for the flint found near the river, is another important attraction in Albany. Situated in Heritage Plaza, the center includes both the Museum of History and the Wetherbee Planetarium.

Visitors walk on the Plaza’s original 1912 red bricks to explore the 1912 railroad station that’s home to the museum, and the 1880 Fryer-Merritt House.

Albany was not only the birthplace of famous individuals, but also the home of a movement. 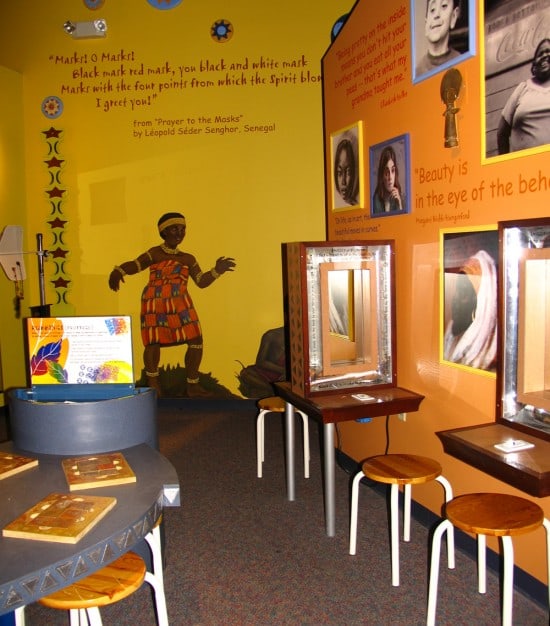 Interactive display at the Albany Museum of Art.

The Freedom Singers started here, in the Old Mount Zion Church. Rutha May Harris, one of the strongest singers—and speakers—for peace and nonviolence during the 1960s, travelled 50,000 miles through 40 states, finally marching on Washington in 1963.

As well as music, Albany is also home to several important arts attractions.

The Albany Museum of Art is best known for its collection of sub-Saharan African art, but also has changing exhibits, a hands-on interactive gallery plus children’s exhibits.

My thanks to the Albany Convention & Visitors Bureau and Laurie Rowe Communications for making my visit possible!

This article was last updated September 1, 2018.

More Things to Do in Georgia

Berry College is one of Rome, Georgia’s, most popular attractions. Enjoy the grounds walking to the historic spots at the Old Mill, Possum Trot Church, and Frost Chapel.

Travel Georgia–Stay at the Lake Blackshear Resort and Golf Club

Check out the upscale Lake Blackshear Resort on the man made Lake Blackshear, with its 97 miles of shoreline that includes cypress flats, flooded timber, hidden coves and secret fishing holes.

The shores of Lake Burton, Georgia, are rich in flora and fauna—over 4200 plant species to be exact. But there’s a richer tale to be told about the bottom of the lake. There, you’ll find storefronts and homes, hitching rails and sidewalks, chimneys and woodpiles, all...
Read More

Old Sautee Market – Sautee-Nacoochee, Georgia I enjoy fine dining, but even more than that, I like finding new spots and trying food that's a little quirkier, whether it's in the preparation or the seasonings. It's all about the taste! Any eating place that features a...
Read More

I visit the deep south of the U.S. every year for a lot of reasons--one of the main ones, I have to admit, is for southern cooking. I've got a lot of favorite foods and restaurants, so thought I'd share my thoughts, er, tastes, with you. Georgia's state prepared food...
Read More

The photo in the header above was taken by Linda Aksomitis near the city of Albany, Georgia, USA. 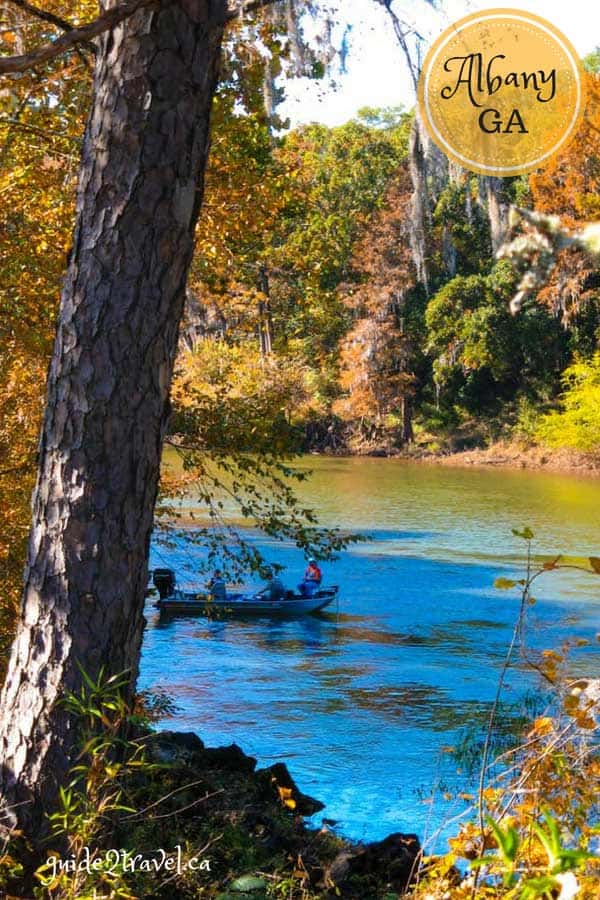 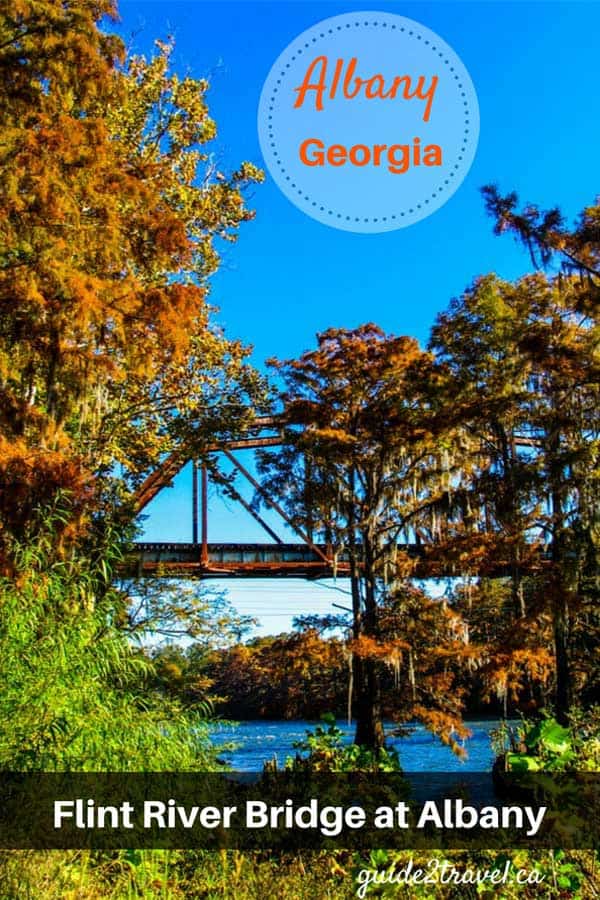 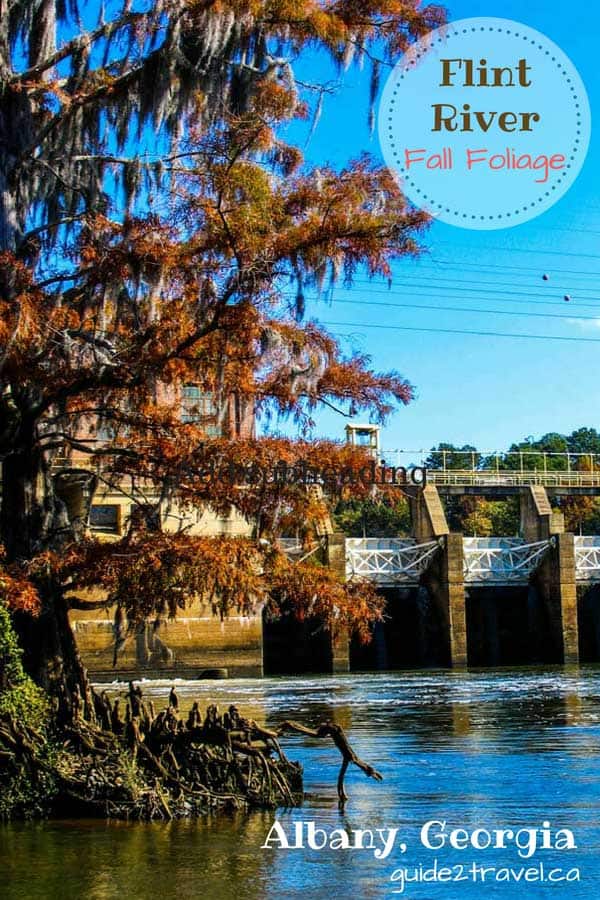