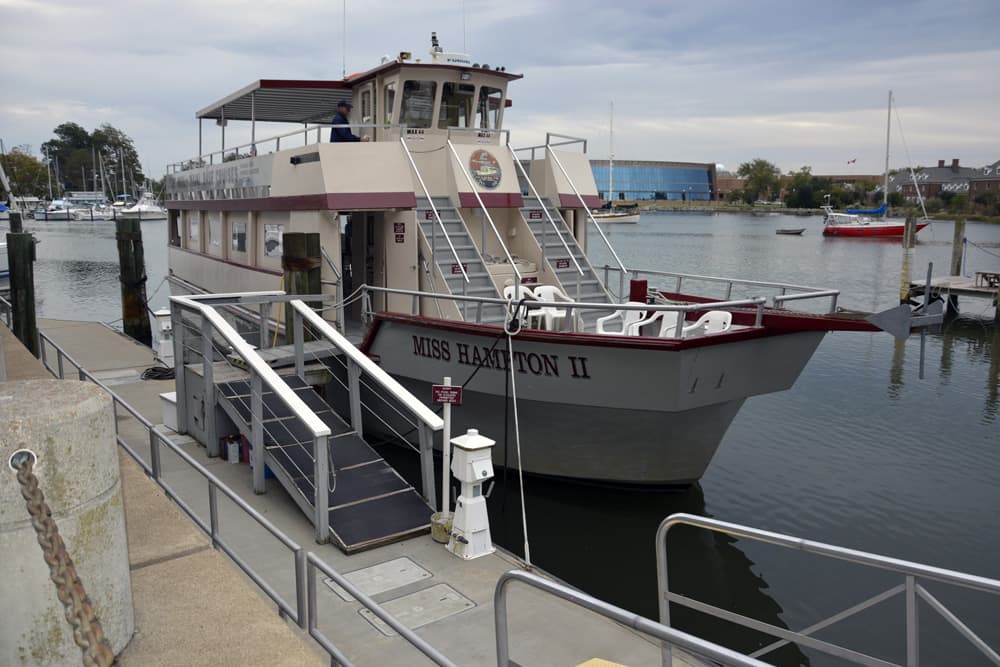 Ahead, the highway seemed to disappear right into the ocean as Interstate 64 dropped into the Hampton Roads Bridge-Tunnel, a 3.5 mile four-lane construction of tunnels, bridges, and tressles.

It was certainly our first experience with an immersed tube as a roadway! Locals, however, take it for granted, since it was way back in 1957 that the Hampton Roads Bridge-Tunnel became the world’s first immersion tunnel connected to man-made islands. Going under the main shipping channels of the Hampton Roads Harbor, it connects the cities of Hampton and Norfolk, Virginia.

And the Bridge-Tunnel is just the beginning of things you’ll find to do in Hampton if you love the water and boats and ships!

If you only have time to do one thing in Hampton, Virginia, that attraction should be the Miss Hampton II Harbor Cruise. 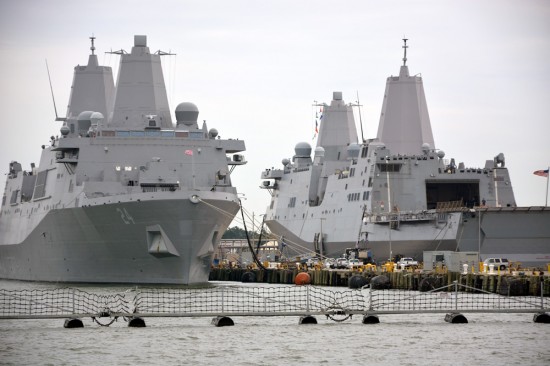 Ships at Norfolk Naval Base.

We boarded the cruise boat right outside our hotel, the Crowne Plaza Hampton Marina, a very convenient and comfortable place to spend your evenings in Hampton.

The cruise heads out of the marina onto the Hampton River, entering Hampton Roads Harbor and finally, out into Chesapeake Bay. Our knowledgeable and entertaining guide, Herb Myers, Jr., shared local history and lore along with a final guided seaside tour of every ship in the Norfolk Naval Base–the world’s largest naval base.

If you have more time, you can also take the guided tour of Norfolk Naval Base on a walking tour.

We were lucky on our waterside tour to see both an aircraft carrier returning to Norfolk and a nuclear powered submarine leaving the base. I must admit to being a bit jumpy with machine-guns pointing in our faces from the support boat that accompanied the sub out into open water, but it was still a thrill to see the submarine’s black steel hull glide past.

Fort Wool may be abandoned these days, but its buildings still stand to give an idea of what life was like on this manmade island back in the 1800s. We were lucky that Fort Wool was a stop on our harbor cruise, so we also had Herb to tell us its history.

Built after the War of 1812, to help defend Hampton Roads Harbor, the island consists of fifteen acres on a stone foundation that proved to be somewhat unstable–in other words, Fort Wool started to sink, and still goes down a few inches every year.

The Fort was an important line of defense during the Civil War, the Spanish-American War, and was finally deactivated for the last time in 1945 after World War II.

When we’re talking about boats and ships, lighthouses are also sure to come up! 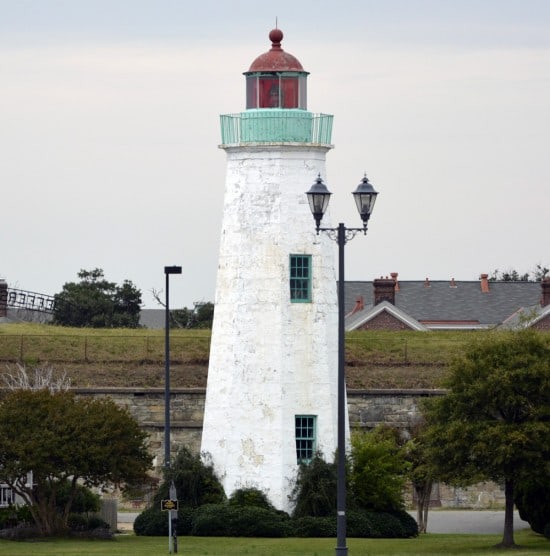 Old Point Comfort Lighthouse is one of the oldest continuously operated lighthouses in the U.S. It sits on the shore of Old Point Comfort, at the mouths of the James, Nansemond, and Elizabeth Rivers. Historians believe people have kept fires and lights burning here since the 16th century when Spanish ships sailed through the bay.

The lighthouse has been American controlled all but for a short period in 1812, when it was captured by the British as an observation tower. It proved to be a great tool–from Old Point the British burned Hampton in June of 1813, then Washington, DC, in August, 1813.

While many buildings fell victims to fire during the Civil War, the lighthouse survived intact as nearby Fort Munroe stayed under Union control.

Our harbor tour gave us a good view of the lighthouse, but you can also see it up close on your visit to Fort Monroe.

Where there’s an inlet or bay that offers welcoming arms to friends–or enemies–approaching by water, you’re bound to find a fort. The southern tip of the Virginia Peninsula was one of these places that has been important to defending settlements, then eventually a nation.

Fort Monroe began construction in 1819, on the site of Fort Algernourne, built in 1609 (burned in 1612). While several wooden forts had been built on the site, after the War of 1812 President James Madison built a series of coastal forts for protection. In fact, Fort Monroe was the largest stone fort ever built in the United States.

Fort Monroe was my favorite of the historic, sea-related sites we visited. You can enjoy it too with this video from the Fort Monroe Authority:

Nauticus & The Battleship Wisconsin – Nauticus is a maritime-themed science museum in nearby Norfolk. While the Battleship Wisconsin is its largest artifact, the 120,000 square foot museum has many more things for visitors to see and do! Here’s a video from the museum: http://www.youtube.com/watch?v=Lx5CoRLcID0

The Mariner’s Museum
The Mariner’s Museum, in nearby Virginia Beach, is one of the world’s largest and most comprehensive maritime museums. It includes the remains of the Civil War ironclad ship, the USS Monitor, as part of its collection. See the museum’s video at: http://www.youtube.com/watch?v=VWn8gQ9Ykpk&list=PLD9EF91CB4FC622C1

Plan your visit to Hampton, Virginia, with the official website of the Hampton Convention & Visitor Bureau — http://visithampton.com/

Our thanks to the Hampton Convention & Visitor Bureau for hosting us during our trip to Virginia.