The Dead River provides one of Maine’s most exhilarating whitewater rafting adventures. Its 15 mile run starts out easy, but builds up to a momentum worthy of the river’s name!

David and I were guests of Magic Falls Rafting Company for the whitewater Dead River season finale Saturday, October 5, 2013. It was my second visit to the West Forks area in Maine, and my second whitewater rafting adventure. The first had been over a decade earlier, down the Kennebec River with Magic Falls.

Whitewater rafting was the most daring experience we planned for our East Coast Fall Foliage Tour–after all, it was also our 40th wedding anniversary trip so we were trying to keep the itinerary moderate, although things always seem to get away on us. And while I get to participate in a number of boating trips, David has no watersports experience as he takes his water frozen, so we can snowmobile on it.

We started out with an easy water adventure, urban kayaking in Fort Wayne, Indiana, so David could get a feel for how the paddling worked. 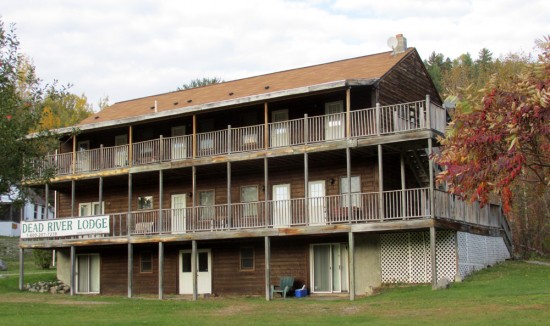 Our next stop was Niagara Falls, where the rapids that head into the falls are well beyond what even the most experienced of paddlers want to challenge!

The drive from Niagara Falls to The Forks, Maine, to Magic Falls Rafting, was some of the most beautiful of our whole trip. We particularly enjoyed the Old Canada Road National Scenic Byway as we neared our destination.

Dave, from Magic Falls, had booked us into the Dead River Lodge, which was also the departure point for our Saturday morning rafting trip. We had few companions so late in the season to share the lodge, but found the accommodations comfortable.

As we settled in, to say we were nervous about getting on the water would be an understatement–as my youngest son had commented on our itinerary, “Don’t you think that’s a lot of water for Dad.”

Friday, along our drive, we had seen the rocky underbelly of what would become a raging torrent of water when the dam at Flagstaff Lake did its release the next morning. Each year there are around half a dozen releases planned, so rafters have limited opportunities to paddle its rapids. 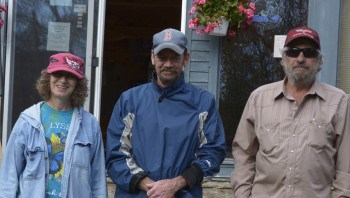 October is the last release, and rafting at that time of year means everyone needs to wear wetsuits in order to ensure we stayed warm. Magic Falls had everything we needed, so by 8:30 Saturday morning, the whole crew was wiggling and jiggling their way into gear.

Two buses transported everyone to the put-in for the Dead River at Spencer Stream, while we all learned some new words to a popular song thanks to one of the guides:
“Better hang on,
Paddle or die,
Ghost rafters
In the sky.”

The good thing for beginners, like David, is that the Dead River starts out slow and easy, unlike the Kennebec that I’d rafted before. Our guide, Mike, was in his 21st season as a guide with Magic Falls, and as he explained, the Dead River is never the same experience twice in a row. The Kennebec, on the other hand, has a daily water release that makes it extremely predictable. 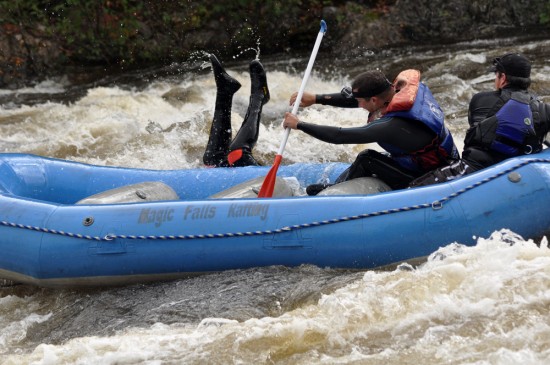 Since Mike was the pro, our raft ran sweep at the rear to pick up anyone that was tossed out and couldn’t get back to their raft. Luckily, that never happened, although we watched a smaller raft with a group of “regulars” having fun dump their raft again and again. Each time they managed to pull each other–and the paddles–back into the raft.

“Paddle left,” “Paddle right,” soon became the bulk of conversation as we flew down the river. Mike made it seem easy, positioning our raft to slide up and over the rapids almost like it was on a roller coaster track. Through Spencer Rips, Hayden’s Landing, Elephant Rock, the Mine Field, we shot, with each set of rapids getting increasingly stronger.

Overhead we had bright sunshine, with an air temperature in the sixties. I didn’t realize how cold the water was until one large splash hit me in the face and ran inside the neck of my wetsuit. BRRRRRR. 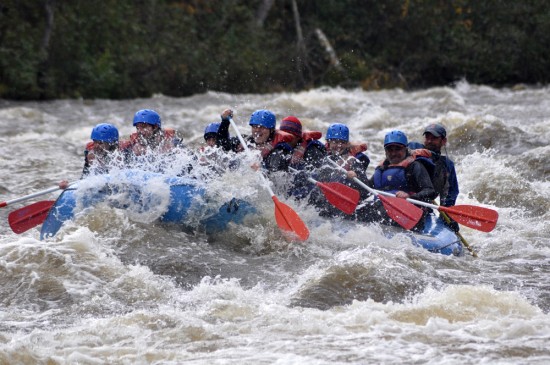 Whitewater rafting with Magic Falls. David is in the back right and Linda is on the back left. Mike, our guide, is at the back of the raft. Photo courtesy Magic Falls.

The water temperature seemed a lot closer to ice than I’d realized! As I’d told David beforehand, hitting each rapid is a lot like riding a snowmobile through a drifted-in backroad. Our raft soon had the rhythm down to a fine art, so we sailed merrily along.

Then, Mike’s face took on a sterner expression and his voice deepened. We knew it was time to get serious. Poplar Falls, the longest continuous rapid in Maine, lay ahead.

Bringing up the rear can be advantageous until you’re watching the other rafts disappear into Class V rapids! I clenched my teeth and my grip on the paddle, grinned at David, and yelled, “Ready?”

Not that it mattered whether we were ready or not. A raging river waits for nobody–or their rafts.

We went in a little sideways, then the bottom fell out and it seemed we were suspended in mid-air between two enormous water rolls. My paddle met with nothing but air–then, thump! The raft landed in water and tossed…but didn’t turn. I paddled hard, but I must admit that there wasn’t much rhythm happening on my side of the raft. 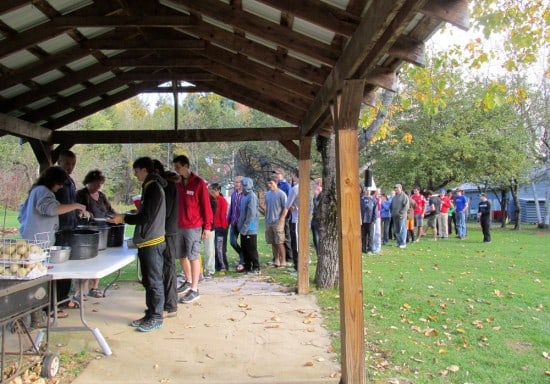 Rafters lined up for the pig roast after whitewater rafting.

Seconds later we were floating merrily downstream again, the water carrying us towards our take-out spot at the Dead River Lodge.

The pig roast and cold beverages loomed ahead with an amazing experience done. Rafting the Dead River had been, we decided, a lot like the 40 years together that we were celebrating–some moments we thought we’d never make it through, and a feeling of elation that we had!

Our thanks to Dave and Donna for hosting us during our fall foliage tour and providing us with such an exciting adventure to celebrate our 40th wedding anniversary!

Thanks also to Wende Gray, of Gray Marketing, for arranging our stops in Maine! See: http://www.graymktg.com/wp/