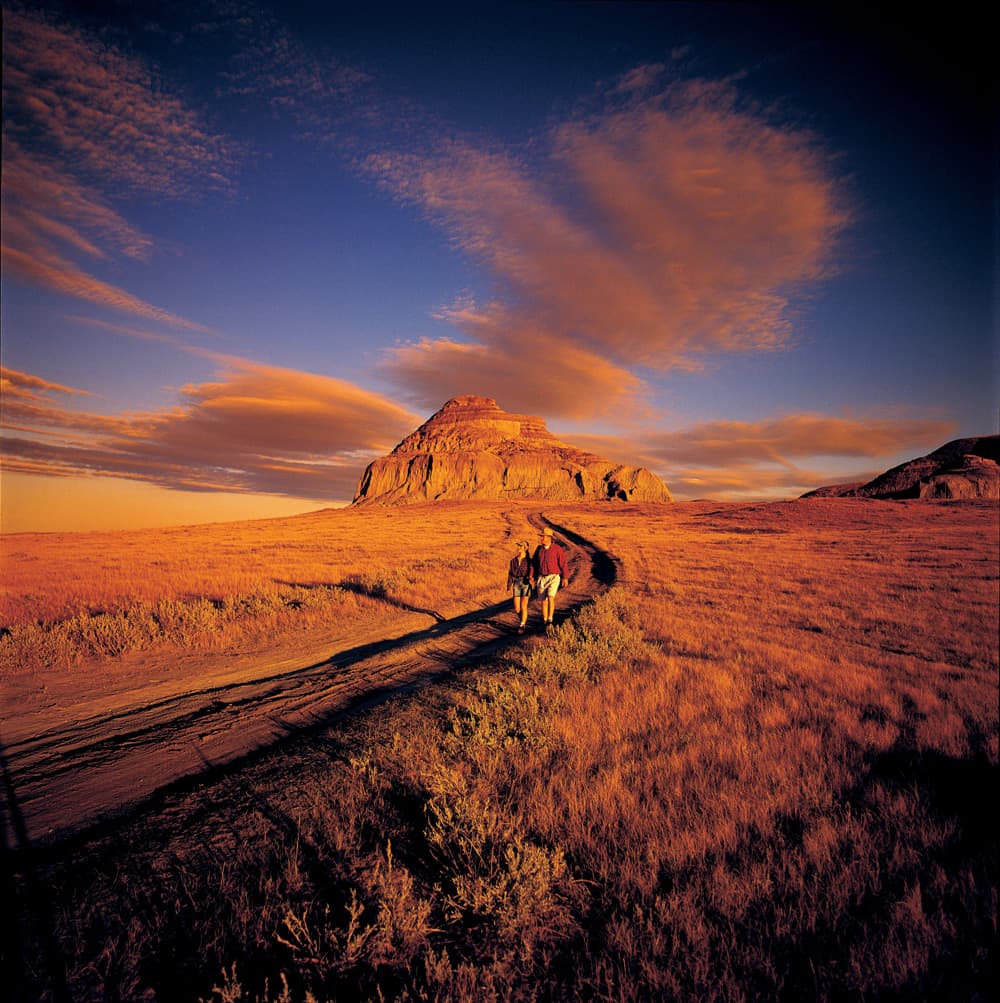 July is one of the best months to visit Saskatchewan! Our daytime temperature averages 25 or 26 degrees (77 to 79 F) Celsius, followed by colorful sunsets (around 9:15 p.m.) with gradual cooling through the twilight hours (full dark near 11 p.m.), so we have long, gorgeous days.

Since half of the sunniest places in Canada in July are in Saskatchewan, it’s a safe bet you’ll need sunscreen while you attend some of our great outdoor events.

Tourism Saskatchewan maintains a calendar of events around the province at: http://saskatchewan-events.com/ — but these are some of my personal favorite places and activities.

One of the must-do attractions in Saskatchewan is to visit the Royal Canadian Mounted Police, or RCMP, “Depot” or Training Centre in Regina. Established in 1885, Depot also provides training for various international organizations. 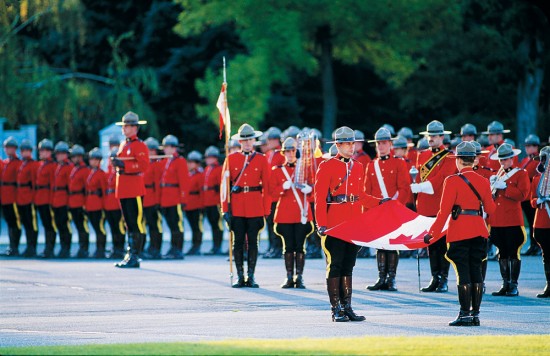 There’s nothing quite like a mud extravaganza to get the whole family out having fun! 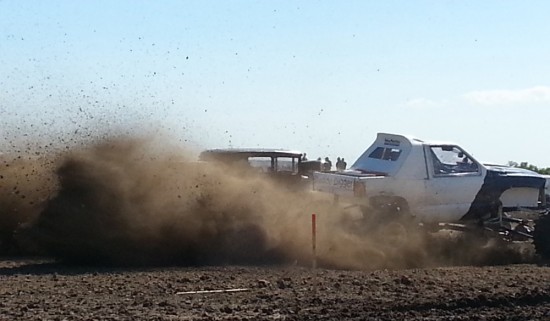 Various communities across Southern Saskatchewan host events that range from fun for beginners to professional events with the Canadian Mud Racing Organization. See their 2014 calendar at: CMRO

Our pick of the summer, though, is the Wickid Motorsports Mud Extravaganza event, July 25 through 27.

What makes the Wickid event the best? Well, the variety of races going on from standard 4×4 trucks driving through deep mud lanes for head-to-head racing, to the lawn mowers screaming around an oval track in clouds of dust.

One of my favorite classes is somewhat like a motocross for 4×4 trucks–when a truck gets airborne something exciting is going to happen, even if that something is rolling over on the track.

Southwest Saskatchewan appears to be pretty flat for those travelling along the Trans-Canada Highway that crosses Canada, so few people even think about fishing here. 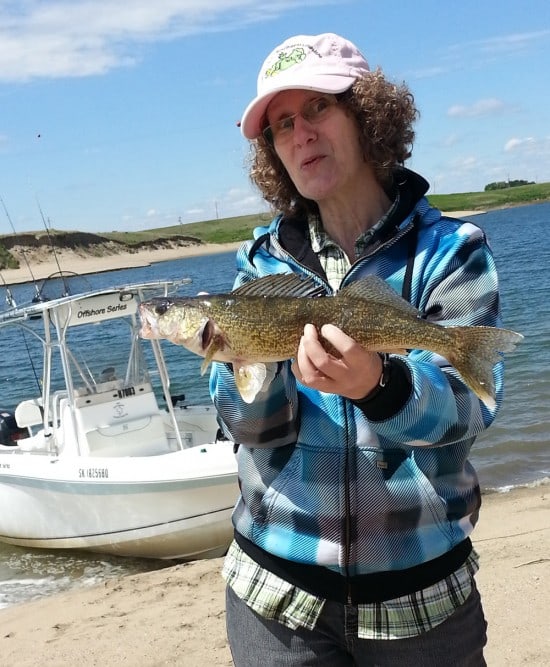 Linda Aksomitis with Lake Diefenbaker Fishing Charters — she caught a walleye for lunch!

However, you don’t have to go far from this main thoroughfare to find some trophy fishing in the South Saskatchewan River Valley.

Lake Diefenbaker, formed by widening the South Saskatchewan, is one of Canada’s fishing hot spots, according to Outdoor Canada. Here, you’ll find trophy Walleye, Northern Pike, and Rainbow Trout (caught about 3/4 of an hour north of the Trans-Canada near Elbow). What more could you want to hook on the end of your fishing line?

If you’d like to try your hand at fly fishing, the best spot is in the Cypress Hills area. Cypress Hills Interprovincial Park (shared with Alberta) is about half an hour south of the Trans-Canada. 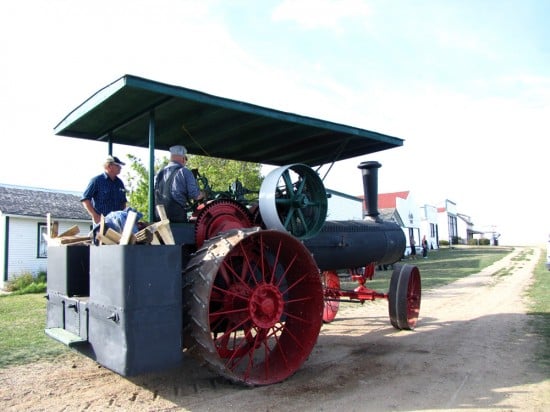 A century old steam tractor at the Deep South Pioneer Museum in Ogema.

Whether they call their annual event an exhibition or sports day or family day or pioneer day, the events bring people together to have a good time. From parades and midways, to ball games and face painting for the kids, every community has its own special way to entertain locals and visitors alike.

We always find Ogema’s Pioneer Days is one of the year’s best smaller community celebrations (after our June event in Qu’Appelle of course!). Luckily, Ogema’s Deep South Pioneer Museum is open all summer for those who miss the annual event.

This Museum is much more than most people expect though, as it consists of 30 original buildings from around the area gathered together to form an historic community. Each building is as it would have been decades ago, whether it’s the doctor’s office, the hairdresser’s, or the local pharmacy.

You’ll get free admission to the Deep South Pioneer Museum if you ride the vintage Southern Prairie Railway–it’s a great adventure, whether you take the short ride, or one of the special trips like the Pitchfork fondue or stargazer evenings.

If you’re looking for midway action and shows, check out the Queen City Ex in Regina, July 30 to August 2, 2014. 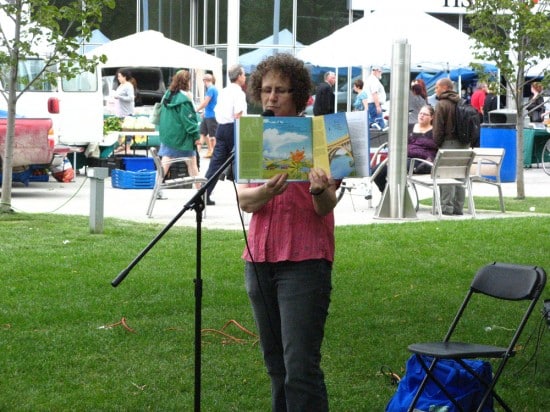 Linda Aksomitis reading at Words in the Park in Regina.

Saskatchewan has been home to many well-known authors, from W.O. Mitchell (Who Has Seen the Wind?), to more contemporary writers such as Guy Gavriel Kay (The Fionavar Tapestry)–both of these authors, interestingly enough, were born in the small city of Weyburn in southeast Saskatchewan.

So, it’s no wonder that a celebration of writing, like the Saskatchewan Festival of Words, would become so important to Saskatchewan’s readers–and writers. It’s held annually the third week of July–July 17 – 20, 2014.

The city of Regina has also partnered with the Saskatchewan Writer’s Guild to have Words in the Park–readings by Saskatchewan authors, every Wednesday afternoon from June through August on the Regina City Square Plaza. 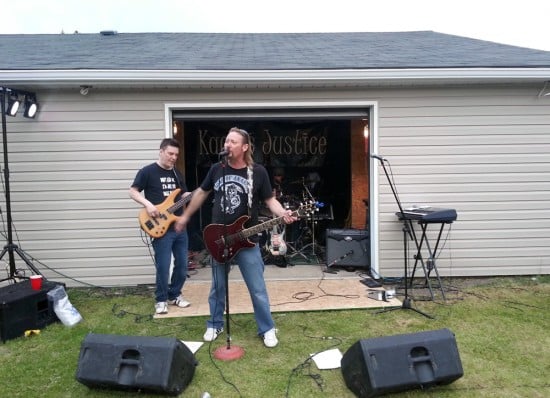 Kaotic Justice playing at an outdoor gathering in Qu’Appelle.

Originally named the Big Valley Jamboree, this July festival has been running since the 1980s. While it ran as a rock concert for a few years, it has been mainly a country music festival hosting some of the biggest names in country music. Craven is about 20 minutes from Regina.

As well, the small town of Montmartre, about an hour southeast of Regina, holds a July folk festival called All Folked Up. Regina’s folk festival runs a month later, August 8 – 10, 2014.

And here in Qu’Appelle, we did our own “music festival” with our favorite local band, Kaotic Justice!

One of the things I enjoy most on a hot Saturday summer night is the zing of … no, not mosquitoes … cars going around the race track. 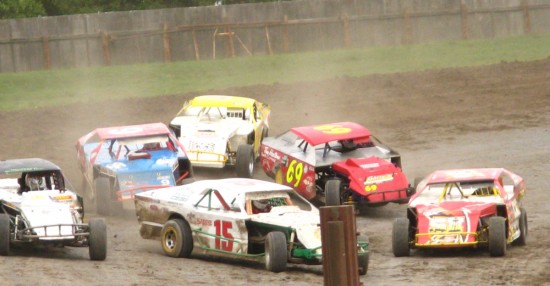 The third Southern Saskatchewan track is a paved 1/3 mile oval in Regina at King’s Park Speedway.

While the racing is great at all of these tracks, we tend to prefer the dirt tracks even though we can get pretty dusted on a breezy evening. With dirt racing, there’s a lot more slipping and sliding happens in those corners!

If you want to head a little further North, to Saskatchewan’s largest city, Saskatoon (in central Saskatchewan), you’ll find the best paved track in the province (at least in our opinion!) at the Auto Clearing Motor Speedway. They host the Canadian Tire NASCAR series every July. The 2014 date for the race is Wednesday, July 16. 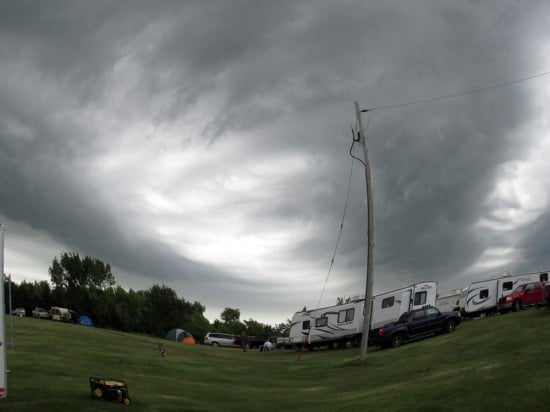 Saskatchewan people camp a lot! So, if you’re looking for variety in both geography and type of campground, we have over 400 to choose from!

Many campgrounds are situated in parks, a number of which are in southern Saskatchewan. We have 35 provincial parks and 135 recreation sites, as well as two National parks—Grasslands National Park in Val Marie and Prince Albert National Park in the North.

Our favorite camping spot is nearby in the Qu’Appelle Valley at Echo Valley Provincial Park, where I took this rather “interesting” photo last summer!

I grew up on an appaloosa horse ranch and David grew up with rodeo, so we do have to check out the rodeo occasionally! There are plenty of locations across the province to follow the Canadian Cowboys Association professional circuit.

And if you’d like to watch the beginners at barrel racing and bull riding, check out the Saskatchewan High School Rodeo Association dates. 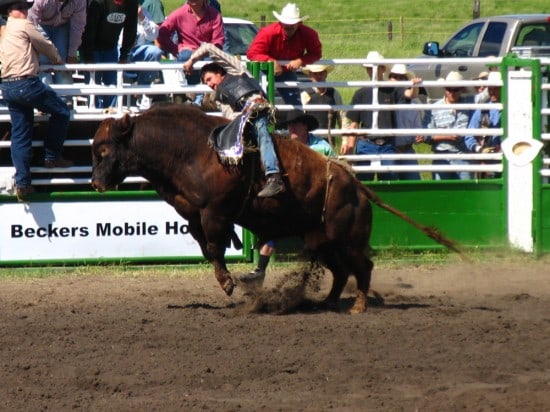 Pick Berries at a U-Pick Farm

When I remember summers as a child, they were all about the wild berries. I spent many mornings and afternoons escaping from boring household chores to pick strawberries, raspberries, and saskatoons.

Now, the wild berries aren’t all that common, but U-Pick farms are, so today’s kids can have that experience. My favorite U-Pick belongs to my brother and sister-in-law at Ol Mill Berries, just a few miles from Qu’Appelle. 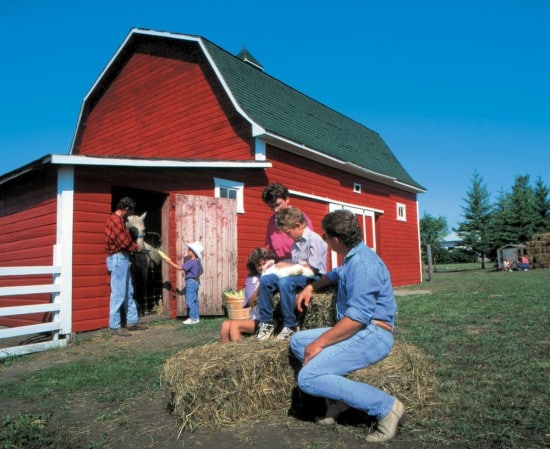 There are a number of U-Pick farms around the province, with many linked through the Tourism Saskatchewan website.

Whatever activity you choose to take part in, I’m sure you’ll find lots of friendly people and fun!