Yo Ho! it's the Lumberjack Show!

“Yo ho,” yelled the lumberjack, rolling the sound out like an echo vibrating through a canyon.

“Yo ho,” a few hundred kids shouted back with as much enthusiasm as you’d expect at the midway on Fair Day.

That took me by surprise, as even though I’d grown up with all my dad’s stories of working in northern Ontario lumber camps, they hadn’t seemed terribly exciting at the time. Here, in Hayward in the Wisconsin Northwoods, the lumberjack tradition was obviously still very much alive and popular.

Settling down on my bench seat at Fred Scheer’s Lumberjack Show, I joined in the next shout of “Yo ho,” which I soon learned was a lumberjack greeting–guess my dad missed teaching me that one. 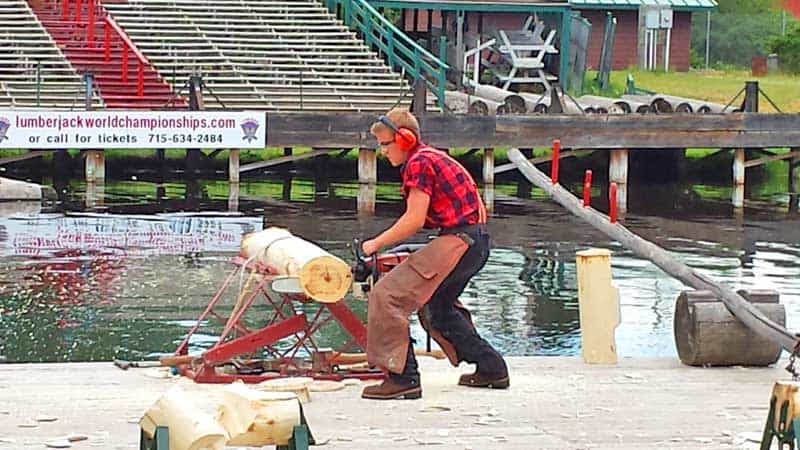 Speed contest between a modern chainsaw and the traditional bucksaw at the Lumberjack Show.

But we didn’t stay settled for long, as Josh, our young announcer, quickly got the whole show rolling (pun intended!). The first thing he did was to divide the crowd into teams–Seely (a nearby town) represented by lumberjacks, Darby and Tom, and Hayward (home of Fred Scheer’s Lumberjack Show), with Charlie and Peter.

Historically, lumberjacks were a pretty competitive bunch. After all, when you put together hundreds of men in top physical condition, working hand-to-hand every day, there’s bound to be more than one that says, “Hey, I’m better at this than you are!” 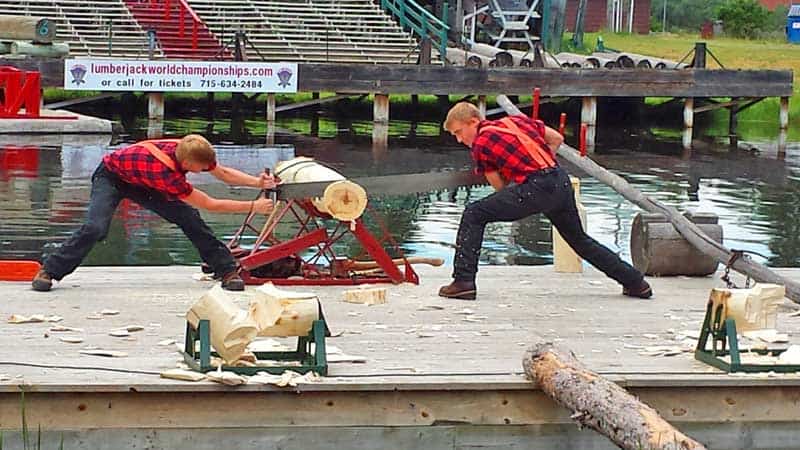 While the show demonstrated all of a lumberjack’s skills, it did a lot more than that. Not only were we involved in the event supporting our lumberjacks with yo-ho cheers, we were entertained.

Humor & Fun at the Lumberjack Show

The show’s humor appealed to kids–and adults–as we watched Charlie, from the Hayward team, declare that his teammate, Pete, had slowed him down with the bucksaw event. 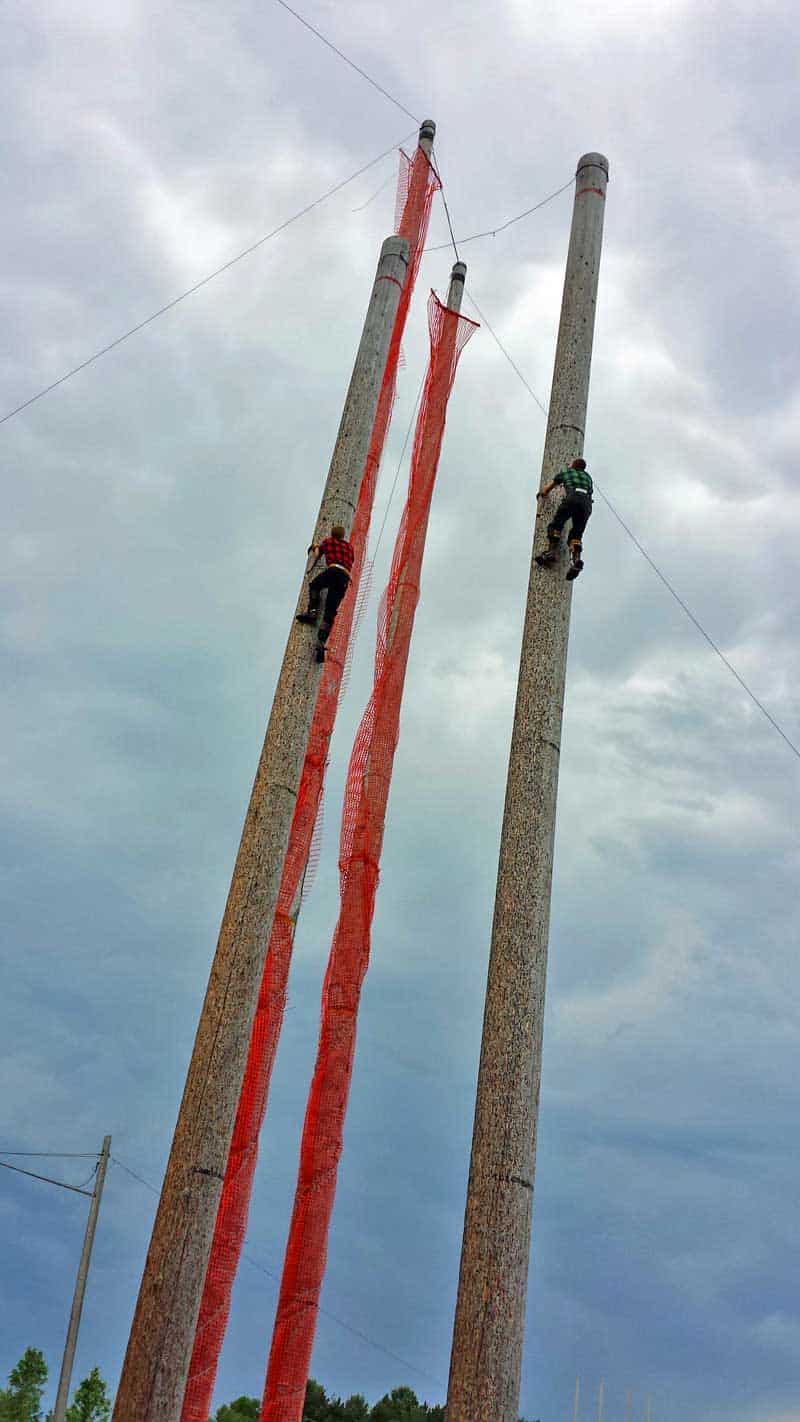 To even things out Charlie pulled out a chainsaw, stuck it between his legs and tried to start it. It didn’t take the kids long to figure out the consequences and burst out laughing.

Darby’s carving of a woodland creature produced the same results, as he sawed off a piece of wood and stuck up two fingers above it for rabbit ears.

We did get to more serious events too, such as using the bucksaw, the obstacle pole relay, the boom run, and climbing to the top of a 90-foot pole.

While these were all fun, I was waiting for the log rolling event. All Dad’s photos from working at the lumbercamp in the winter had featured teams of horses pulling a wagon load of logs. Here, though, I knew rolling the logs, to keep them moving on the water, had been a big part of being a lumberjack.

Historically, logs were cut during the winter and skidded to the edge of a river. When break-up came in the spring and the river started to flow, the logs were pushed into the water and rolled along by skilled men wearing spiked boots to stay on top of them, and using a pole to push jams apart. This job, river driving, was the most dangerous of all the lumberjack roles.

Where I was, in the Lumberjack Show arena, had been a giant holding pond for logs of Weyerhaeuser’s North Wisconsin Lumber Company decades earlier, so the event was as authentic as it gets. 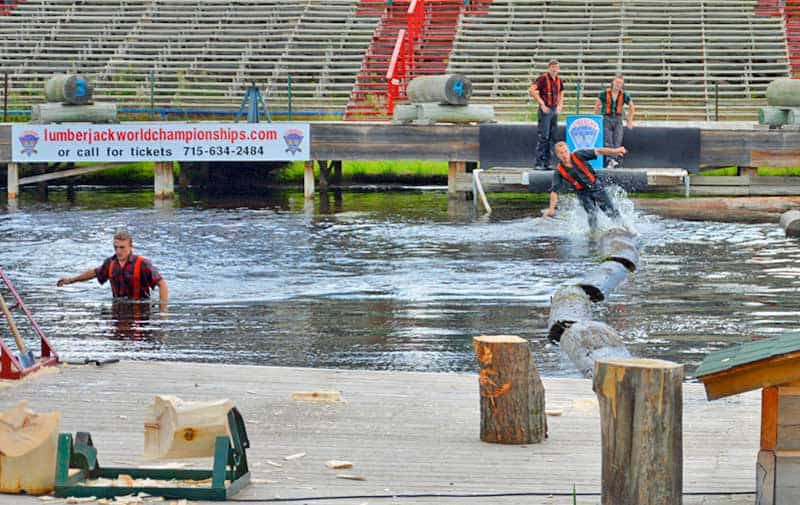 Rolling logs at the Lumberjack Show in Hayward, Wisconsin.

And I wasn’t disappointed when the guys started to roll the logs! With steps as precise and intricate as a Metis jig at a fiddle dancing event, our two teams of lumberjacks paired off to see who would be the first to fall off the spinning pole they both shared.

With his feet flying over a whirling log, I was amazed to see that Darby still had time to kick one foot into the water to splash Charlie! 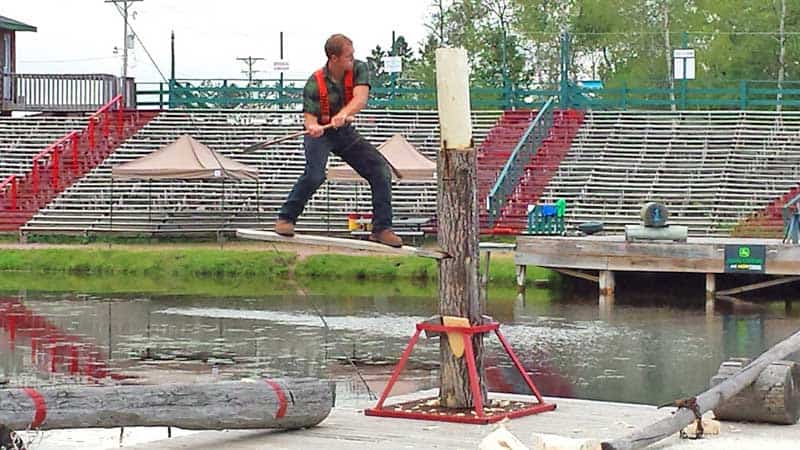 The kids cheered and cheered and cheered until I thought they’d all be hoarse, however, a few proved they still had strong voices. The day’s last event pitted four young competitors from the audience against each other to see who could yell “Yo ho” the loudest.

When the time came to choose the winner, the crowd got to judge–young Alex from Savannah, Georgia, proved that east coast kids had what it takes to be a lumberjack too, as he came out with first prize. 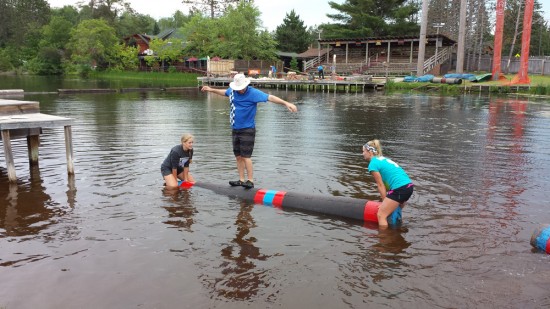 Local young people do have an advantage with the actual log rolling, though, as they can spend time each summer in a log rolling school hosted by the Namakagen River Rollers, developing their own skills to enter the Lumberjack International Competition held annually in Hayward.

I met several of the young teachers, Meredith, Claudia, and Maggie–all of whom had world competitions and a few titles under their belts, er, shoes, already.

Indeed, they told me one of the toughest things about learning log rolling is building your own calked shoes with just the right amount of traction products in them.

While I chickened out, several of the group I was with did give the training logs a roll. It didn’t take a lot of imagination to see what standing on a 12 inch wide log (narrower logs spin faster)–even a carpeted one–would be like for a workout!

If you’re braver and have better balance than me, there’s even a weekly Open Roll in Hayward, hosted by the Namekagon River Rollers, where grown-ups can check their skills at log rolling.

Now, if only I had time to get back to Hayward for the Lumberjack World Championships, July 19 – 21, 2018, to see some of these young people take away those championship titles again.

For more information on the Lumberjack competition, see: https://www.lumberjackworldchampionships.com/ .

If you miss the world championship, do take in Fred Scheer’s Lumberjack Show in Hayward — it’s awesome!  http://scheerslumberjackshow.com/

And here’s a quick look at some events from a BBC Newsreel on YouTube:

My thanks to the Wisconsin Department of Tourism, for hosting my Wisconsin Northwoods visit. Also, thanks to Geiger & Associates for organizing such a great trip!

More Things to Do in Wisconsin

In an era where virtual reality and movie special effects can fly audiences through distant galaxies and send them careening down the bloodstream inside the human body, it's hard to imagine that a small balcony, two sets of stairs and the sheltering arms of a maple...
Read More

Towering over the museum grounds, the National Freshwater Fishing Hall of Fame and Museum's giant four-and-a-half stories tall muskie is called a "shrine to anglers." For visitors, like me, to Hayward, WI, it's an amazing conglomeration of concrete, steel,...
Read More

The photo in the header above was taken at Fred Scheer’s Lumberjack Show, in Hayward, Wisconsin, USA. 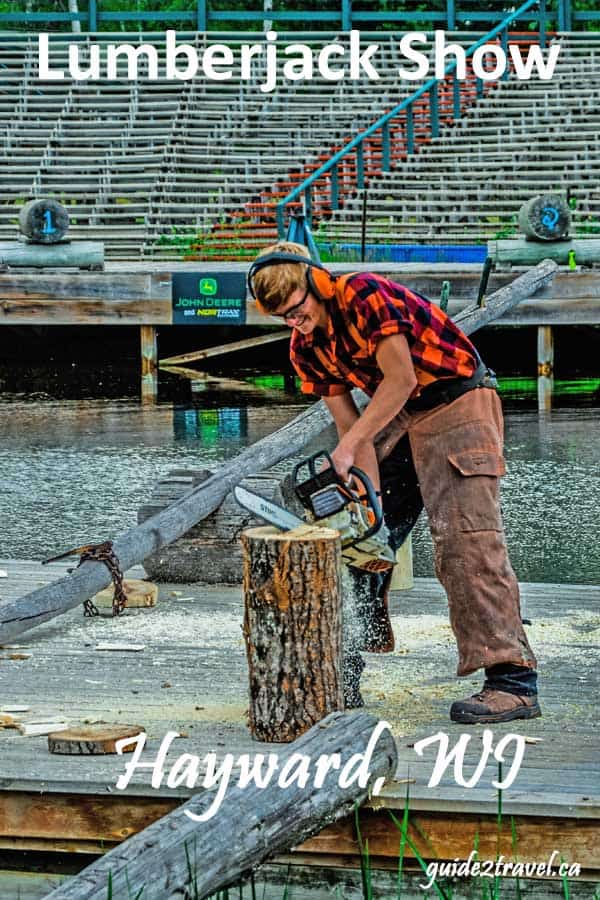 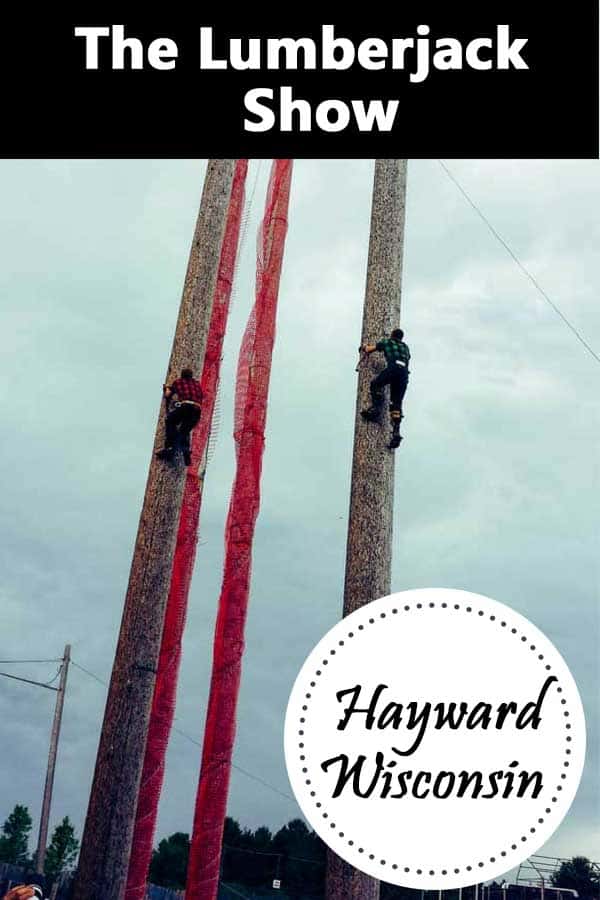 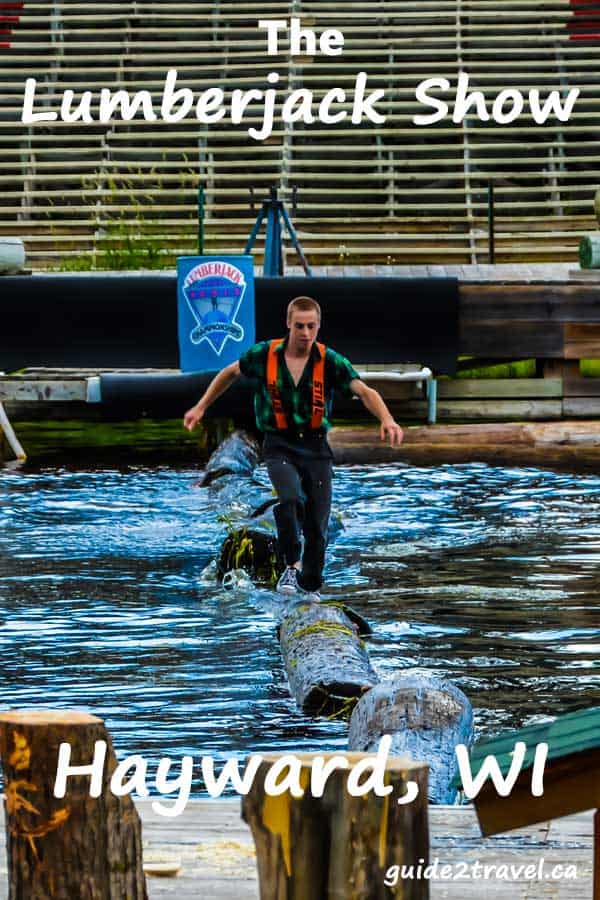