Towering over the museum grounds, the National Freshwater Fishing Hall of Fame and Museum’s giant four-and-a-half stories tall muskie is called a “shrine to anglers.”

For visitors, like me, to Hayward, WI, it’s an amazing conglomeration of concrete, steel, and fiberglass with a little–or a lot–of paint thrown in.

I’ll admit this giant fish also makes me wonder if a dinosaur could be hiding somewhere around the trees and park benches too. 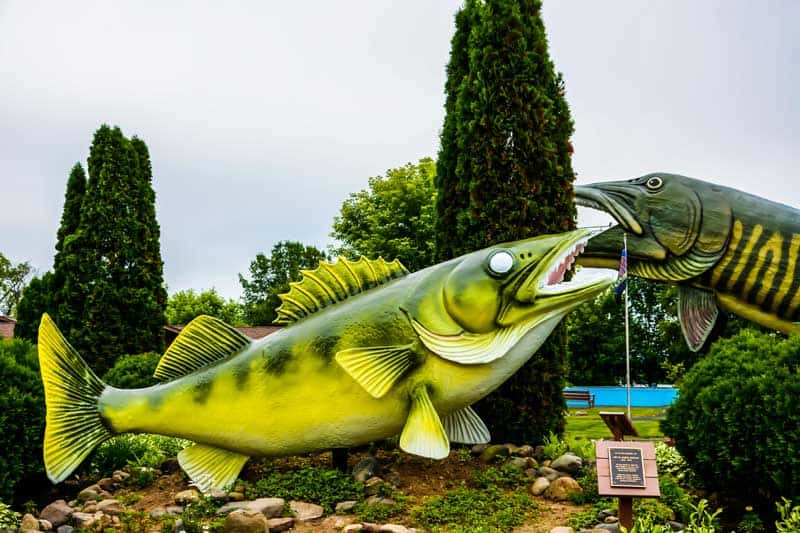 Giant fish at the Fishing Hall of Fame in Wisconsin.

Perhaps the most amazing thing about the giant musky though, is the fact that all that fiberglass covers a museum display and staircase to the top of the muskellunge (the muskie’s real name).

Well now you can put yourself inside even bigger jaws, peering out between enormous top and bottom teeth, at the grounds below. Or, you can take photos of the kids and grandparents waving down at you from between those sharp, needle-like teeth. 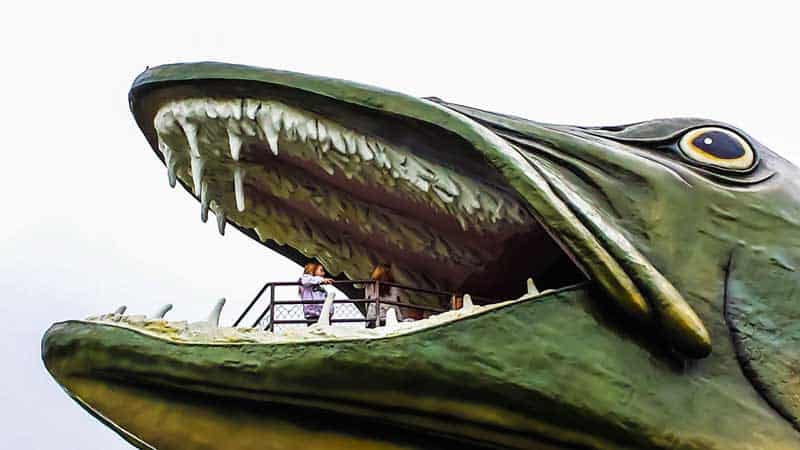 Children in the mouth of the giant muskie at the Fishing Hall of Fame in Wisconsin.

Kids, when they’re done climbing inside the giant musky, will love the seven-acre outdoor park around the National Freshwater Fishing Hall of Fame and Museum buildings. Its grounds are covered with a sea of other oversized fish, although none as massive as the muskie.

Inside the four-building museum complex there are lots of not-so-massive, but “once-real” stuffed fish. And the most impressive of these? The 69 pound, 11 ounce, world famous muskie pulled from Wisconsin’s Chippewa flowage by Louis Spray. 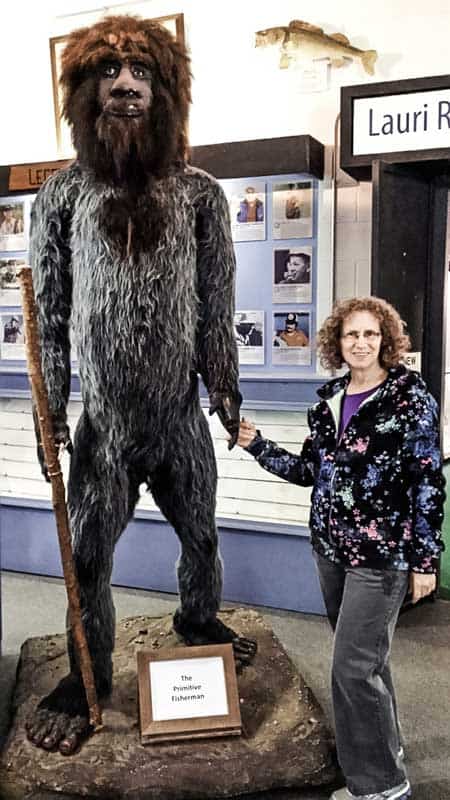 The mythical first fisherman at the National Freshwater Fishing Hall of Fame & Museum.

I, however, found myself much more drawn to a not-so-real statue of the primitive fisherman.

Mythical creatures fascinate me, so when I held his hand I imagined this hairy primitive fisherman as a sasquatch, or bigfoot, since there are many reported “sightings” in Wisconsin.

There are a lot more mythical creatures in Wisconsin than bigfoot though–some of them never seen elsewhere!

Over the years that we raced snowmobiles in the Wisconsin northwoods, I became quite familiar with the Rhinelander hodag.

Well, stories tell that it’s a horned green (or black) creature with a spiked back like its prehistoric ancestors, and the horrible smell of a skunk combined with the stench of buzzard meat.

Thank goodness I’ve never met or smelt a hodag–although it appears that despite Eugene Shepard’s photos and displays at local fairs, that nobody ever has. Indeed the hodag was proven to be a construction even more elaborate than the Fishing Museum’s giant muskie.

Despite its mythical status, Rhinelanders still have a lot of fun with their hodag. Many events carry the hodag name, including the Hodag Country Festival held each summer.

As you might guess, the musky inspires just as many events as the Rhinelander hodag, with one of the most exciting being the Hayward Lakes Chapter of Muskies Annual Fall Fishing Tourney. 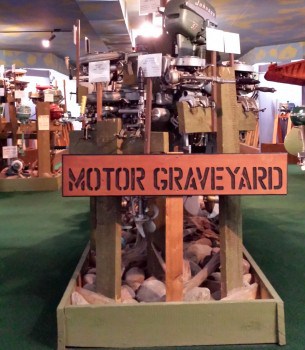 Motor graveyard in the National Freshwater Fishing Hall of Fame and Museum.

With the popularity of sportfishing in Wisconsin, it’s no wonder the freshwater fishing hall of fame ended up here in Hayward.

Much to my surprise,though, it was the Motor Graveyard that I found most fascinating in the museum’s collection of more than 50,000 artifacts and vintage pieces displayed. I’d never imagined–never mind seen–so many different types of boat motors!

Row after row of boat motors line the walls, each with an information card giving all the important stuff, like horsepower and manufacturing year. Right about then I realized boat motors have as long of a history as cars.

Inboards, outboards, whatever kind of vintage motor you’d like to see, there’s probably one in the museum’s collection of 1000+ motors!

Of course, the museum is also a Hall of Fame, recognizing contributions to freshwater sport fishing’s many different aspects, from maintaining public awareness, to professionalism in the sport.

As well as people, the hall of fame notes the record fish themselves. Its record book covers world size and line-class records for all of the fresh water species in North America. And that’s a lot of record keeping judging by the more than 300 mounted freshwater fish on the museum walls.

While I highly recommend a visit to see inside the museum walls as well as the giant musky outside the museum, if you can’t, here’s a short YouTube clip that will give you an idea of what you’re missing!

Visit the National Freshwater Fishing Hall of Fame and Museum

My thanks to the Wisconsin Department of Tourism for hosting my Wisconsin Northwoods visit. Also, thanks to Geiger & Associates for organizing such a great trip!

More Things to Do in Wisconsin

In an era where virtual reality and movie special effects can fly audiences through distant galaxies and send them careening down the bloodstream inside the human body, it's hard to imagine that a small balcony, two sets of stairs and the sheltering arms of a maple...
Read More

"Yo ho," yelled the lumberjack, rolling the sound out like an echo vibrating through a canyon. "Yo ho," a few hundred kids shouted back with as much enthusiasm as you'd expect at the midway on Fair Day. That took me by surprise, as even though I'd grown up...
Read More

The photo in the header is of the giant muskie “shrine to anglers” at the National Freshwater Fishing Hall of Fame and Museum in Hayward, Wisconsin, USA.