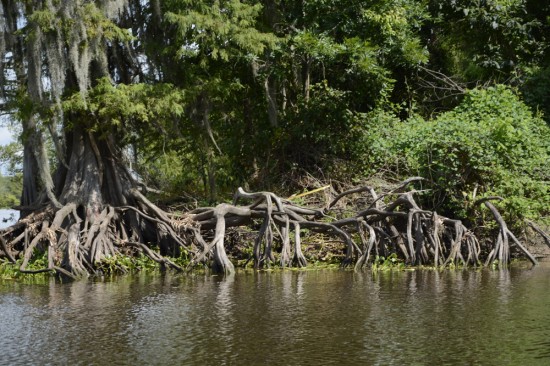 Swamp tours are the #1 thing to do when you visit South Louisiana!

Imagine alligators lurking in the shadows, finding shade under Spanish moss covered cypress trees on the shore. Your covered pontoon tour boat glides by as one of these “live fossils” from the Age of Reptiles, some 200 million years ago, slides into the swamp.

In fact, when you’re in Atchafalaya Basin you’re seeing the largest river swamp in the United States, home to nearly one million acres. 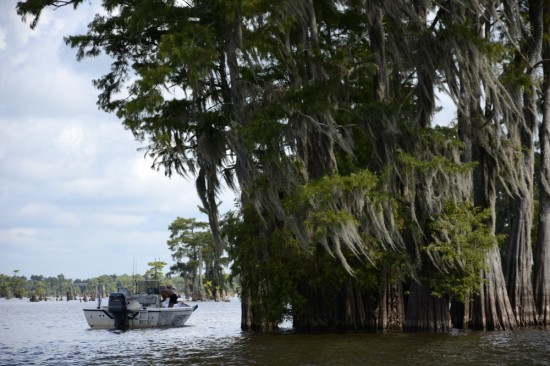 Cypress trees and logging stumps in the Swamp Tour at McGee’s Landing in the Atchafalaya Basin–South Louisiana.

Our guide for McGee’s Atchafalaya Basin Swamp Tour was Captain Curtis, who at nearly 90 years old, knew a lot about the swamp and its inhabitants!

We were, he told us, about 150 miles inland from the Gulf of Mexico. During Captain Curtis’s lifetime, though, around 2000 square miles of coastal landscape has sunk into the sea, making for an ever-changing coastline behind the levees that hold the water back.

The water in the Atchafalaya Basin flows South from two provinces and 34 states, so it’s no wonder it’s the largest.

As the boat hummed its way across the water we came to a cypress forest now under 25 feet of water. Cypress trees grow to be thousands of years old, so protecting them in the Atchafalaya Basin is very important. 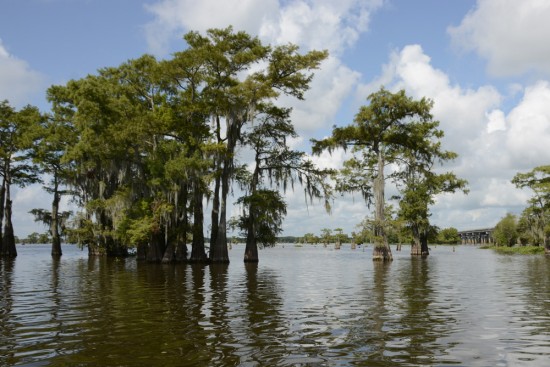 Atchafalaya Basin cypress trees with the I-10 Bridge coming into view in the distance.

The Atchafalaya Basin tour was, I found, somewhat different from swamp tours I’d had on the Western side of Louisiana. Here the wide expanse of water let us see for miles and miles, while a bayou swamp tour takes you up a much narrower and shallower waterway that seems to be cut between the stands of trees.

With the Atchafalaya Basin tour though, we didn’t have to worry about snakes falling on top of the canopied boat! We saw numerous birds, from egrets to bald eagles, as we cruised over the water. However, with temperatures in the 90s the day we were out, the alligators stayed hidden in shady places.

For me, one of the tour’s high points was cruising under the Atchafalaya Basin Bridge on the I-10 Highway section that connects Lafayette to Baton Rouge, the state capital. 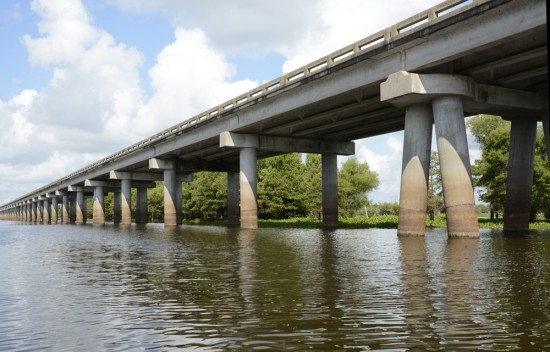 Atchafalaya Basin Bridge is on the I-10 highway.

The fourth largest bridge in the United States, (longer than #2 if measuring shore to shore), it spans 18.2 miles! Seeing the size of the pillars so close we could almost touch them, really showed the work and precision required to build such a massive structure. 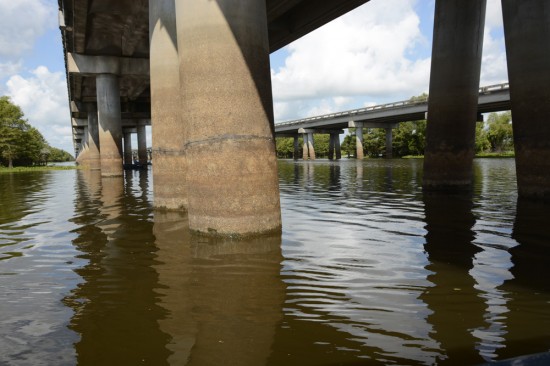 Atchafalaya Basin Bridge pillars of one highway and second highway showing on the right.

Back at McGee’s Landing after our swamp boat tour, we had a little time to go through the facilities. McGee’s Cafe and Bar is the place to be in the area if you’re looking for the local Cajun cuisine, as they serve it all: alligator, crawfish etoufee, seafood gumbo, boiled crabs and fried shrimp. 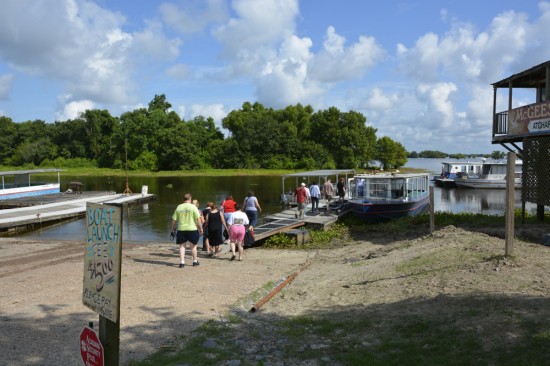 McGee’s also provides cabins and a campground–and you can use the dock for a small fee. Weekend evenings (check the schedule!) often feature bands, so you can sit back and enjoy Cajun Country!

Information about Atchafalaya Basic from the US Army Corps of Engineers

This is a full history of the basin: http://www.mvn.usace.army.mil/Portals/56/docs/PAO/Brochures/ABFS-Brochure-27apr07.pdf

Our thanks to Travel Media Showcase and Iberia Parish Convention & Visitors Bureau for hosting us our visit.