Ice oval snowmobile racing is fast–maybe not as fast as straightline drag racing, but considering the snow machines are going into corners at up to 100 mph, well, that’s more than most of us would want to try!

Snowmobiling is my favorite sport, both as a spectator and a participant. And in Canada, the top snowmobile racetrack is in Beausejour, Manitoba.

Beausejour has two races each snowmobile season, the season opener (December 6 & 7, 2014) and the Canadian Power Toboggan Championships (March 7 & 8, 2015). I just attended the opener, which was, as usual, a great event! 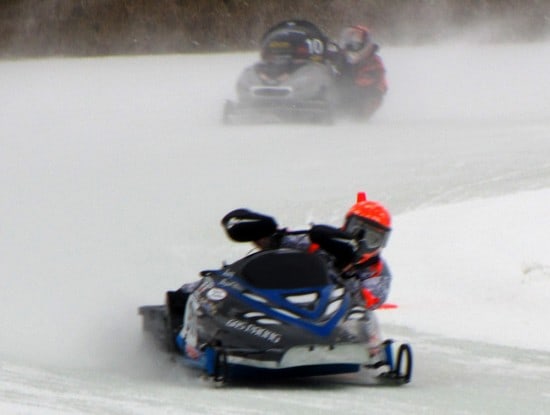 Mind you, every race I’ve attended there has been great, starting with the first one back in 1978. That was so long ago the gate attendant asked if I was over 14 or not, when adding up our admission fees! I suppose I should have been flattered, since I was already 20 something and a mom of two, but what really happened was I quit wearing toques for the next half dozen years to keep from looking like a kid.

I’ve attended snowmobile races all around North America and can guarantee that Beausejour runs a top-notch event for spectators and racers. We truly appreciated the option to pay for track side parking with the truck this year, so I could warm up my fingers after snapping photos.

In the old days, when we were racing at Beausejour and I was taking videos of all the events, I used the old fashioned method of defrosting my fingers by clenching my cold hands under my armpits!

Of course, we didn’t just hang out at the truck, but also made our way to the warm-up building to take advantage of the canteen, beer gardens, and an opportunity to buy CPTC souvenirs. 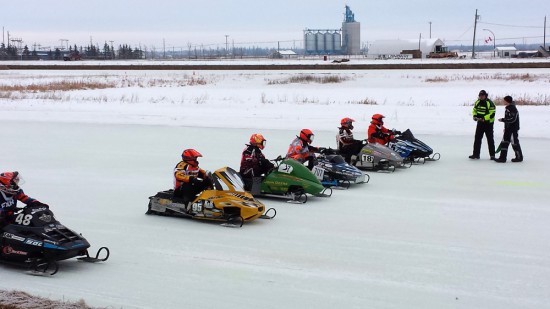 But anyway, back to the snowmobile racing!

Interestingly enough, there were still a lot of the same modified race sleds flying around the track as there were when we dropped out of competition back in the early ’90s.  From Motoski Superstocks to Polaris Super Mod 440s, the oval racetrack is a whole different world.

Time does march on, though, and we were anxious to see the latest oval race sleds, the Outlaw 600s. How different could they be? A lot!

While only three Outlaws hit the track in Beausejour, it was easy to see you’d need to learn some new driving techniques to get the checkered flag at the end of one of those races!

It was a very safe event, with no ambulance runs. Indeed, there were only two wipe-outs during the whole race day, with one of them flying across the ice and crashing into the straw bales right in front of our truck. I hadn’t seen the driver lose control so was taken by surprise by the thud when the machine hit!

Luckily, spectators don’t have to worry as parking is well behind the barriers. The driver stood quickly, held up both hands in the time-honored “all right” signal, and the race continued. His ’79 Ski-Doo looked a little worse for wear though, when the rescue sled loaded it up to haul it off the track a few minutes later. 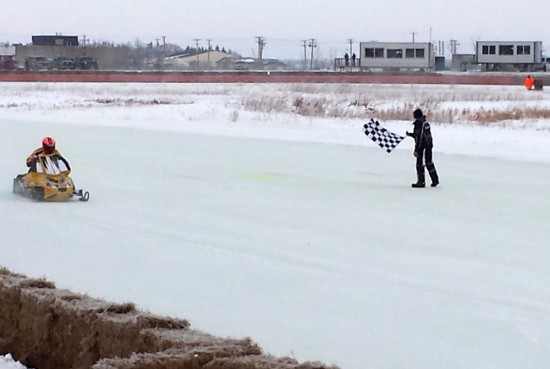 Race director giving the checkered flag at the finish line.

But what about that 100+ speed of the day? The actual speed was 166 kph or 103.15 mph, and was set in the Saturday Pro Champ 440 Final by its winner–Malcolm Chartier of Marine City, Michigan.

The Pro Champs ran a round robin that day, with four heat races and a final. Chartier won every race on his 2015 Ski-Doo. And I’ll confess those races  had my heart in my throat, remembering my own days fighting to be first to the checkered flag.

Just in case you can’t get to a snowmobile race near you — or for some reason, don’t want to spend all day at a racetrack in sub-zero temperatures — here’s a YouTube video from the 2014 Eagle River World Championship produced by Chartier Motorsports. Enjoy!