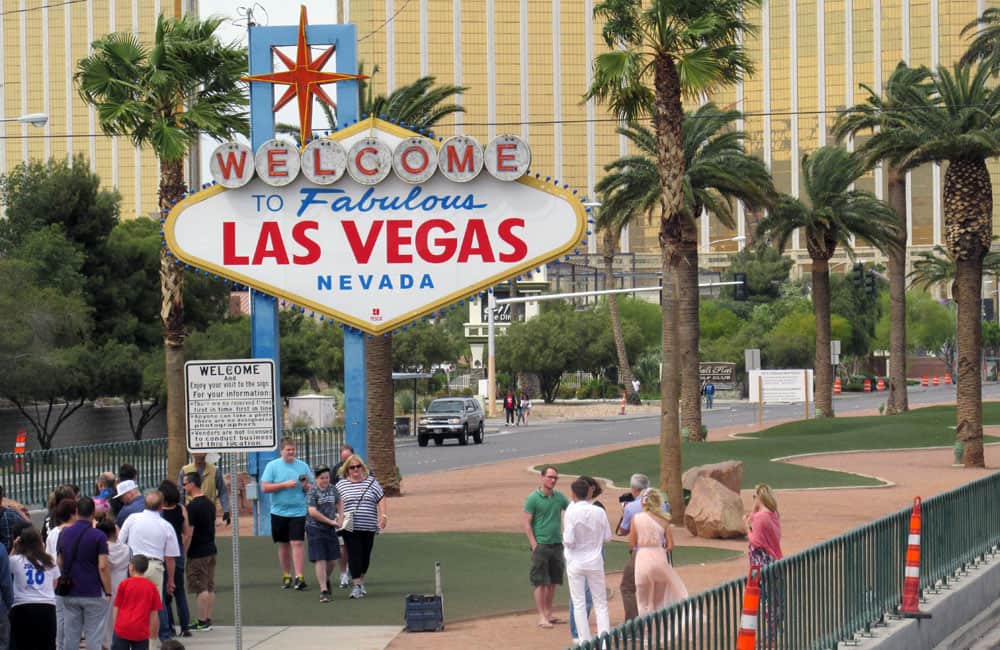 And while I haven’t visited a million times, this spring I made my seventh trip to Las Vegas, and it likely won’t be my last. I’m not even a gambler (although I did win $32 on a penny machine this trip!), so the lure of Las Vegas is more the bright lights and things to do. Here’s my list of Las Vegas deals.

10. Dinner Show – Tournament of Kings at Excalibur.  Sit down to a medieval feast and cheer for your favorite knights in armor at your choice of two nightly shows.  Whether you like to be entertained by men clad in steel or striped down to their breeches, the pomp and excitement of this middle ages joust with galloping horses is just a ticket away. (Disclosure: I received two free tickets, but some of my group paid full price and felt the cost was still a great deal.) 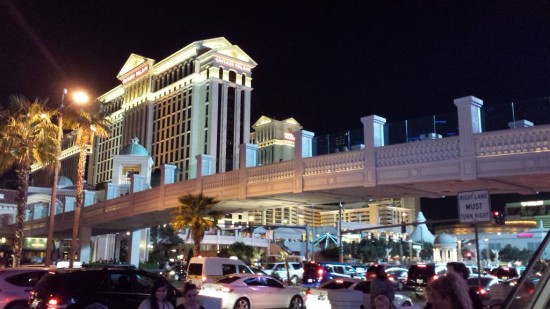 9. Cheapest Beer and Food Courts.  There was a time when food and drinks were inexpensive everywhere in Las Vegas, but those days seem to be long gone. Our first stroll down the strip had us parched enough to give up and pay $8 a beer (which converted to about $10.40 a beer in Canadian dollars). Luckily, we did get far enough on our second walk to get to Casino Royale where Michelob Ultra beer had been $.99 on my last trip and still was this time. It also has a reasonably priced food court and is right next to McDonalds (beside Harrahs).

8. Car Show – at Linq. You might not expect to find 250 vintage vehicles stored on the fifth floor of a Las Vegas hotel, but that’s exactly what you’ll find at the Linq car show. From rare auto models, to cars owned by famous folks, each of the cars has a story to tell. While I usually check in to see what’s new (cars are bought and sold, so the display changes all the time), this time just the guys headed over for the morning (while the ladies went shopping). And since we printed free admission tickets from the Web before we left, it was indeed one of the best show deals. 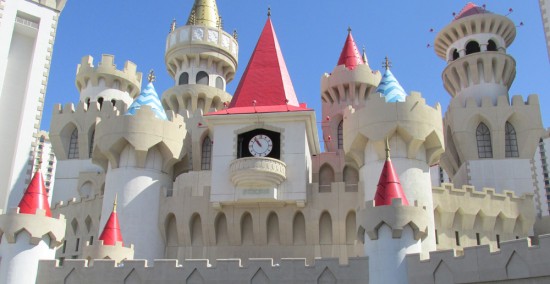 You won’t find clocks in Las Vegas as a general rule, but this one at Excalibur is part of the fairy tale castle’s exterior.

7. Hotels – Bally’s and Harrah’s. This year we stayed at Bally’s, while on my last trip for a girls’ weekend we stayed at Harrah’s. Both were comfortable and earned three and half star ratings on Expedia–which we felt was accurate given they’re budget priced. They’re both reasonably well located on the strip, although Bally’s is more central as the strip has been growing northward. Both hotels are accessible by shared stops on the Monorail, which is a great way to get around for a day or two of your trip.  Harrah’s advantages: right beside McDonalds, and #9 Las Vegas deal above, cheapest beer and food courts. Bally’s advantages: bus stop for the hop on-hop-off bus (Las Vegas deal #3 in this article) and right beside Paris, which has the Northbound Deuce bus stop; and just a block from #2 Las Vegas deal in this article, Ellis Island microbrewery and barbeque. 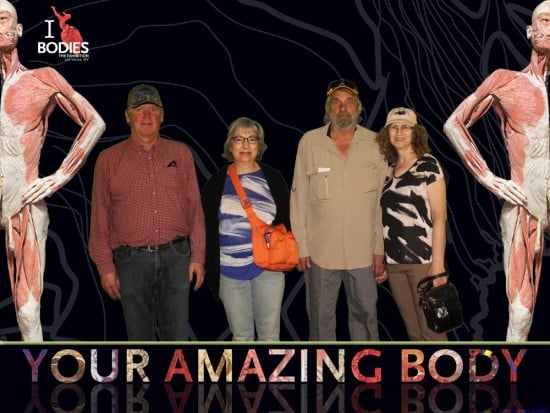 6. Education – Sin City does have some great opportunities for education, beyond the obvious adult aspects of your visit! There are a number of museums and attractions that draw families to bring the kids for daytime pursuits–our favorite was Bodies the Exhibition (Disclosure: our girls weekend in Vegas received 4 free tickets, but I paid to go through it again this trip). It’s located in Luxor, the hotel with its original hotel/casino built as a pyramid (sorry, I found the ziggurat towers might have been necessary to add rooms, but it sure detracts from Luxor’s street appeal), which itself is a must see for the statues and replicas of ancient Egypt. At any rate, Bodies consists of real human bodies dissected and preserved, which once you get over the horrific element (it’s a scientific presentation with every effort made to be respectful to the bodies on display) is fascinating. We took advantage of the reduced price for buying two tickets at a time, and also went through Titanic: the Artifact Exhibition. 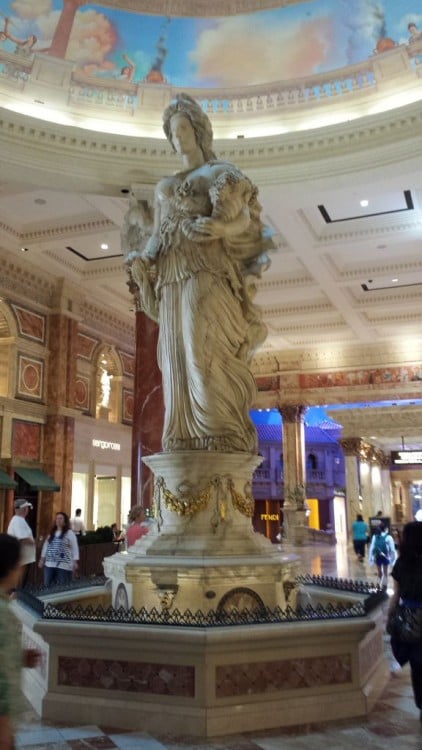 Statue in Caesar’s Palace in the Forums Shops.

5. Themed casinos – Way back when I first starting going to Las Vegas, the hotels were all themed, from Luxor as the replica of a pyramid to New York, New York and the Brooklyn Bridge replica, right to Circus Circus with its flying trapeze artists. New hotels, however, have a much more subtle approach to architecture and themes, so as updates are done more and more of those original designs disappear, or are closed (like the free show sinking the pirate ship at Treasure Island) or moved into paid exhibits within the hotels (like the tigers all into Mirage’s Secret Garden and Dolphin Habitat). All that said, there are still some pretty amazing places to just walk through and experience replicas of other parts of the world for free including: Paris (the Eiffel Tower at a 1:2 scale), The Venetian (architectural replicas of Venice, including the canals), and my favorite, Caesar`s Palace (ancient Rome).

4. Shopping – While it’s easy to get lured into spending your shopping budget walking through the Forums at Caesar’s Palace or the Grand Canal Shoppes at the Venetian, I highly recommend visiting one (or both) of the Outlet malls. They’re easy to access with the Deuce Buses that roll up and down the Strip, or the Big Bus tour stops at the North Outlet. I’ve shopped both outlet malls and found it easier to navigate the South outlet, although there were some great sales on at the North outlet.

3. Transportation – Big Bus Las Vegas – If there’s a Big Bus (or other hop-on hop-off bus service for that matter) available at a destination we always take it. We were lucky in Las Vegas and got a free day with our pass (do check the Web for specials first–the second day is often a Web special only, so you may have to buy online or see if the ticket sales person will honor the sale price). As with all bus tours the quality of the narration depends on the individual and we had one awesome guide, one poor guide, and two average guides over the course of our two days. Bally’s, where we stayed and caught the bus, is stopped at twice, making it very convenient to catch a bus. The route change, though, is at Circus Circus (there are two routes, Strip, and Downtown), and you need to switch to the Downtown Route for the Las Vegas Premium Outlets North and the Fremont Experience. 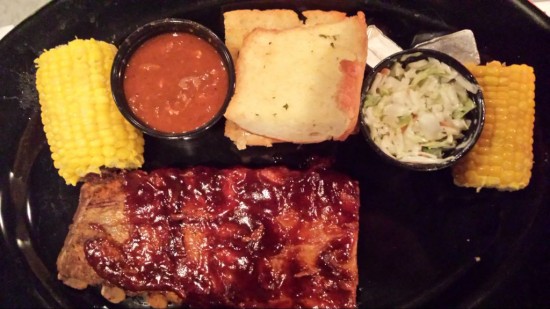 2. Dining and Drinks – Ellis Island – If we hadn’t already heard about Ellis Island from a recommendation of a friend of a friend, we’d have found out about it on our first Big Bus ride as the tour guide indicated it was one of the best meal deals in Las Vegas. They were all right! Home to Nevada’s number one brewery (serves over a million excellent glasses of beer annually), Ellis Island also provides reasonably priced, delicious meals (try barbequed anything!).  We made the trek several times including breakfast and dinners (steak and eggs for $5.99 and dinner special for $8.99). It’s just a block off the Strip, right behind Bally’s, so it was an easy walk.

1. Evening Show – Fremont Experience. If you only have one night to spend in Las Vegas it has to be at the Fremont Experience! Even if you’ve never visited Las Vegas, you’ve probably seen the flashing lights of Fremont’s casinos dozens, if not hundreds of times, as they’ve been included in most television shows and movies that included Vegas. 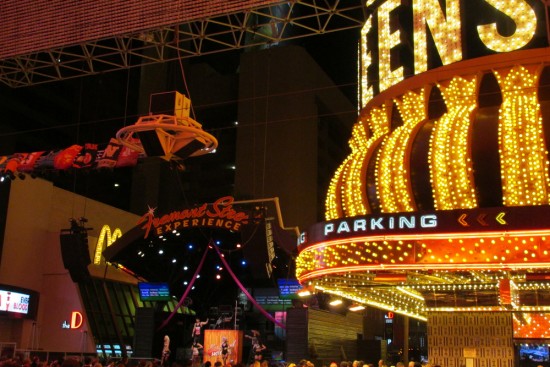 Gaming started on the original street in 1931 when the Northern Club received one of the first gambling licenses issued in the state. Today, some of the early neon signs that followed in those first casinos have been restored by the Neon Museum, and are displayed in what’s known as the Fremont East Entertainment District. From street performers wearing next-to-nothing, to the Las Vegas Slotzilla Zipline (currently $20) where you fly 1750 feet from one end of the experience to the other, to the four-block long 90 foot overhead light show that runs 7 times nightly (free of charge), the evening’s entertainment is a true Las Vegas must-do experience and the best deal in Las Vegas. We got off our Big Bus Tour at Fremont and took a taxi back to Bally’s (Just $20).

Monorail on the Strip – http://www.lvmonorail.com/

If you’re more interested in exploring the shows and fine dining, here’s a top 10 list from Alex Belfield: