We like to celebrate tradition — and what’s more traditional than baseball, the old ball game? Whether it’s the crack of the bat against the ball, or those glorious afternoons and evenings of summer fun, it’s a sport North Americans love!

I know the crowd at the Neuroscience Group Field at Fox Cities Stadium all enjoyed the game as much as I did on my June visit.

But, where did baseball start?  You could say its history is as muddied as the knees of a ninth grader sliding into home plate after a rainstorm.

If you’re interested in the long history of ball-and-stick games, like the British Rounders that are often said to be baseball’s origin, David Block provides the full history in his book, Baseball Before We Knew It.

But, as to modern times and the game of baseball as we know it today…

When was the Modern Game of Baseball Invented?

John Newbery, a British publisher, illustrated a triangular base-ball field with posts (not bases), in the 1744 children’s book, A Little Pretty Pocket Book. 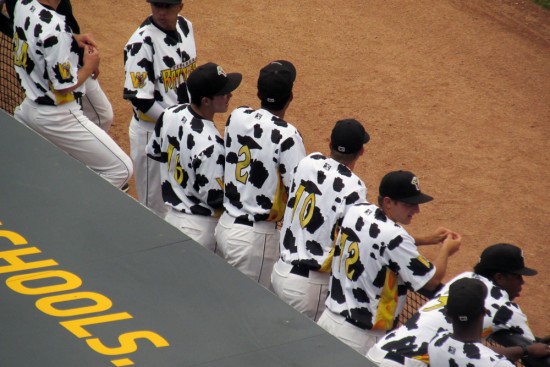 Wisconsin Timber Rattlers in their special uniforms for their salute to dairies for Wisconsin Dairy Month.

If you’re shaking your head — I agree — nobody would slide into a post to make a run. That wasn’t our baseball.

So, if we’re looking for a something that looks and feels like today’s game, jump ahead another century, to Beechville, Ontario, June 4, 1938, where Dr. Adam E. Ford documented the game in a letter. Maybe that means the game is Canadian, eh?

Well, I have to admit that claim is a little muddied by the fact that said letter wasn’t made public until it was published in Sporting Life magazine 38 years later, on May 5, 1886 (well that and the game had five bases).

And then we have the Knickerbocker Baseball Rules adopted by the Knickerbocker baseball club in Cooperstown, New York, September 23, 1845. Here we have home plate, three bases, three strikes, and three outs — I’d say that officially documents the modern game of baseball! 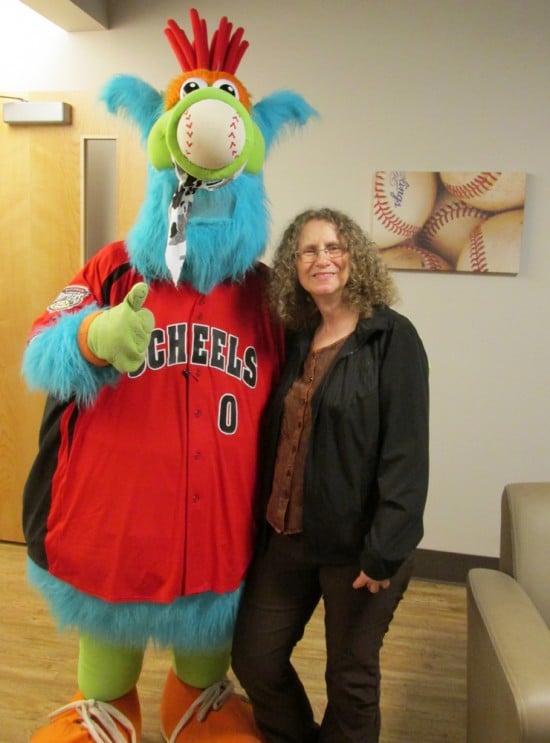 I visited during Wisconsin Dairy Month on the Timber Rattlers “Salute to Cows” night, a fun event that started with a cow and calf in the parking lot, autographs from Rochelle Ripp, the 65th Alice in Dairyland, and lots of onfield entertainment including milk chugging and dairy bowling!

However, talking to fans I soon discovered that every night is special at the stadium. And since the Timber Rattlers have 70 home games in a season that’s a lot of nights.

You can watch the game from seats on the grass (least expensive), to stands, to VIP suites, which I found gave me a great view. In their third year of operation, the suites add a whole new dimension for spectators, as well as a venue for corporate meetings.

The upper level with the suites has a bar, so I was introduced to my first beer from Appleton’s three microbreweries–Blu Bobber from Fox River Brewing Company. While my hubby and sons all campaign for no “fruitation” of beer, I’m a true lover of all things blueberry and found this ale worthy of a few mugs.

Food is in ample supply at the stadium as well, with lots of options in a dozen different concession areas offering everything from burgers and brats to pepper steak sandwiches. Groups can even sign up for an all-you-can-eat picnic buffet at the Miller High Life Home Run Porch in the right field.

And if your night out is all about the game, the Wisconsin Timber Rattlers have been affiliated with the Milwaukee Brewers since 2009, and have resigned to 2020, so you know you’re going to see some great playing.

Take Me Out to the Ball Game

But if we’re talking about traditions, one of the most famous ones in baseball is that old song, Take Me Out to the Ball Game. Here’s a YouTube version of the Edward Meeker, September 1908, recording (Edison Record) with the original 1908 lyrics.

Make Wisconsin’s Fox Cities a stop on your next vacation! See: