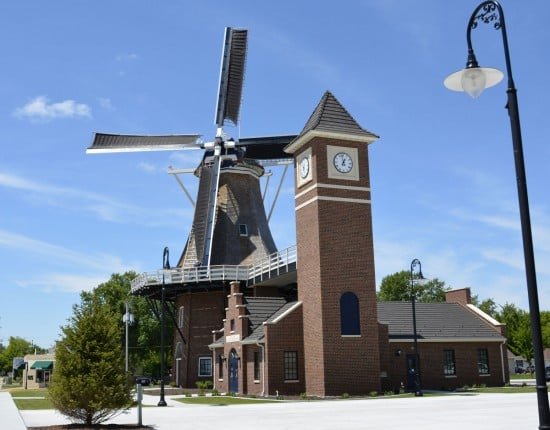 “Whooooomp…whooomp…whomp.” The wind mill blades started turning slowly, as if the wind had trouble pushing the enormous blades. But move they did, round and round and round, settling into a steady rhythm on the hot summer day in Little Chute, Wisconsin.

I stared up the 100 feet, fascinated. A windmill, I decided, was a stationary ship with four long rotating arms to hold its sails. And just like sailing, the more the sails were adjusted to catch the wind, the faster those enormous blades pump out their whomp-whomp beat.

The Dutch windmill in Little Chute is a replica of 1850s mills in the Netherlands. That was truly the era of wind mills, as there were 9000 of them–nearly five times as many as the wind turbines used today.

Little Chute’s windmill is a dream come true for the Dutch Catholic community that came to the Fox River Valley after the Menominee people sold four million acres of land to the Federal Government in 1836. 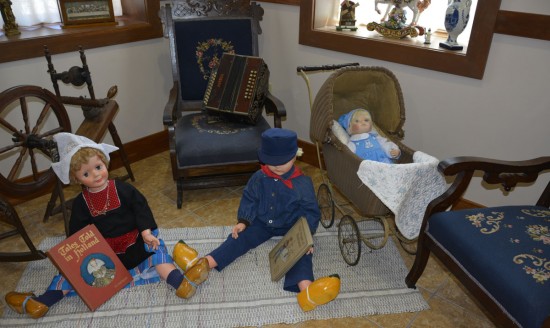 Dutch children’s toys and Dutch artifacts in the Visitor Center

Father van den Broek had come from Amsterdam, Holland, in 1832 to be a missionary to the Fox Valley locals, who immediately built him a large wigwam that served as his home and church for a number of years.

Once the land became available for settlers, Father van der Broek went back to the homeland and returned with three full ships of families to make their home in the area. He delivered his sermons in French, English, and German, as well as the Indian language, being teacher, doctor, and priest throughout the Valley.

Today, Little Chute and its surrounding area is believed to be the largest Dutch Catholic community in the U.S.

Little Chute Gets Its Windmill

It took more than a decade for Little Chute’s wind mill to make its first whomp-whomp in the Fox River Valley after the decision was made to purchase the replica. Fourth generation Millwright, Lucas Verbij, built the mill in the Netherlands, then disassembled it and shipped it to Little Chute to be reassembled.