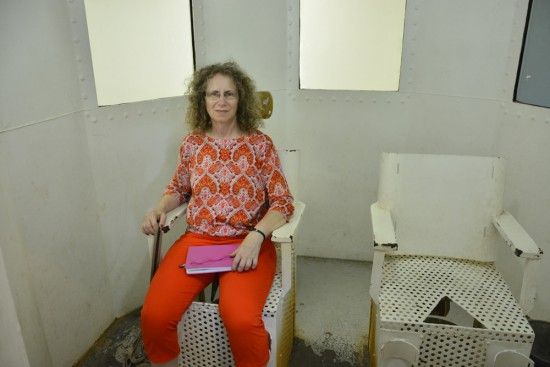 Linda Aksomitis in the gas chamber at the Missouri State Penitentiary

The lever drops–crystals of sodium cyanide fall into a pail of sulfuric acid below. A smell, harsh, like bitter almonds, rises from the hydrogen cyanide gas that forms and wafts out.

Holding your breath will only help for a minute or two, just long enough for gas to fill the metal, airtight chamber, replacing the oxygen.

The thing is that horrible things happen to the human body when it’s deprived of oxygen, until finally…we die.

Luckily for me, there was lots of oxygen to breathe the day I sat in the gas chamber at the Missouri State Penitentiary. [cmamad id=”6498″ align=”floatleft” tabid=”6495″ mobid=”6495″ stg=””] Even so, my hand, not strapped in as a prisoner on death row’s would have been, clenched the metal arm of the chair, and my heart pounded in my chest. Instead of the loved ones of my victims, a group of tourists watched for my reactions.

The Missouri State Penitentiary, decommissioned in 2004, is a tourist attraction that’s a lot off-the-beaten path and more than a little bit quirky. Perhaps that’s why it really appealed to me as an historic destination I had to visit.

Ray Miller, my tour guide, had been a Deputy Sheriff in Jefferson City, Missouri, home of the penitentiary. As he said, “When Alcatraz opened, this prison was a hundred years old already.” Back in 1831, when the Missouri State Penitentiary was built, it was declared to be the greatest in the world. 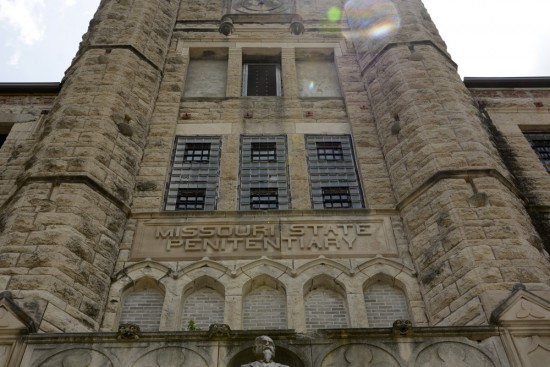 Missouri State Penitentiary with “ghost orbs” floating around the top of the main building.

The prison, sometimes called the “bloodiest 47 acres in America,” remained open for 173 years, until its last prisoners were transferred to the new Jefferson City Correctional Center. Its stories, still told by local one-time guards and police officers, are of violence and pain and suffering, and sometimes, redemption.

Of course, the gas chamber, where I sat, was a relatively new addition, having been built in 1937. The book, Shanks to Shakers: Reflections of the Missouri State Penitentiary

, by Mark Schreiber, includes a photograph of staff and inmates assembling the chamber after it was delivered to the site.

In total, 40 men died in the chamber–see this list: http://www.missouripentours.com/executions.php including four double executions. And as you can see from the “ghost orbs” floating at the top of the photo (above left) of the penitentiary’s main building, the spirits of some refuse to move on.

Visit the Gas Chamber at the Missouri State Penitentiary

Whether your interest is history, the human condition, the paranormal, taking part in one of the prison break events, or experiencing the quirky, I can highly recommend taking the Penitentiary tour (all visits must be part of a tour or an overnight ghost hunter experience).

Information is online at: http://www.missouripentours.com/

The penitentiary is located at 115 Lafayette Street in Jefferson City, Missouri.

What do you think?

If you’ve already visited this Missouri attraction, what do you think? I found it an eerie experience–and while I’ve seen similar settings on television and in movies, in the real world setting the harsh reality of what it would be like to spend time in a penitentiary really hit home.

I’d like to thank the Missouri Division of Tourism for hosting my visit to Jefferson City, Missouri. Online at: https://www.visitmo.com/