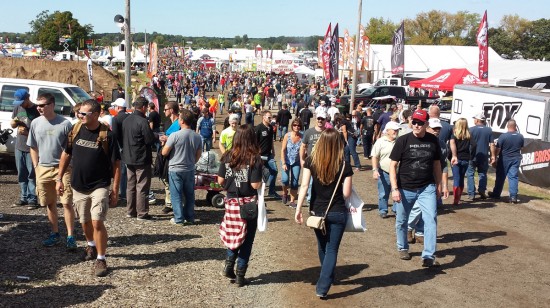 The crowd at Haydays!

What’s 49 years old? Packed with close to 50,000 arm-to-arm people? Spread out over 30 acres? And billed as the official start of winter?

I’ve been at a lot of events and I’ve never seen so much energy and enthusiasm squeezed into such a small, well, okay when you’re walking it even at 70 degrees, large, space. Sure, I’d seen the list of exhibitors and have been at a few swap meets in my time, but nothing prepared me for sheer enormity of Haydays this year.

While nobody has ever told me where the name hay days comes from, I’ll venture a guess that it was from racing snowmobiles on the grass or hay instead of snow or ice.

Originally held later in the fall, it’s now scheduled for the first weekend after Labor Day, so you can start planning now to attend the big Haydays birthday party in 2016.

The event grew up around snowmobile drag racing. Back in the 1960s, sleds were a lot less, shall we say–technologically advanced–than they are today.

Then, the field was full of snowmobiles like the Snojets, John Deeres, Mantas, and well, any of another 100 or so brands belching out two-stroke engine oil smoke and roaring through non-existent mufflers. It was the peak of snow machine madness. 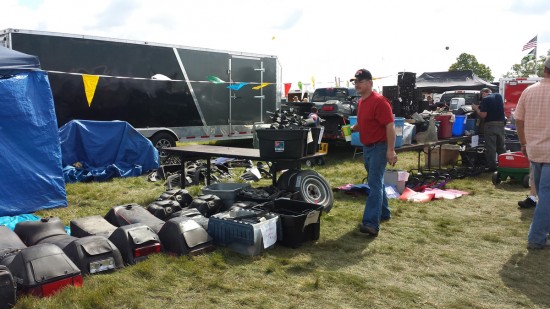 Today, you can still see some of these vintage sleds in the Swap Meet. With 2000 (sold out!) spots for swappers, there’s just about anything you can imagine for sale. By the number of sleds and tracks and hoods and other assorted parts being transported out on small ATV pulled trailers, it looked to me like a pretty brisk marketplace.

With so many snowmobile enthusiasts in attendance, Haydays draws vendors from around the midwest. We were shopping for new skis, so worked our way around the exhibits the first round talking to knowledgeable exhibitors. The grounds, while outdoors, were labeled and organized the same as you’d find in an exhibition center. It was easy to find everyone.

This kind of show is often mostly about the what’s new and trending as much as about the must-haves. So, this turbo caught David’s eye! 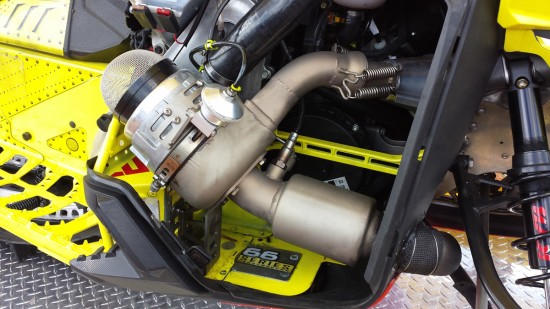 Snowmobile drag racing is still king at Haydays. It’s the warm-up for the upcoming race season for many teams, as the new 2016 sleds have all arrived and are being worked on.

Just how fast is a snowmobile drag race? Well, close to 150 mph, with the 2015 Outlaw final winner, Walter Joy, clocking in at 139.9 mph measured in a 66-foot “speed trap” that ends at the finish line. 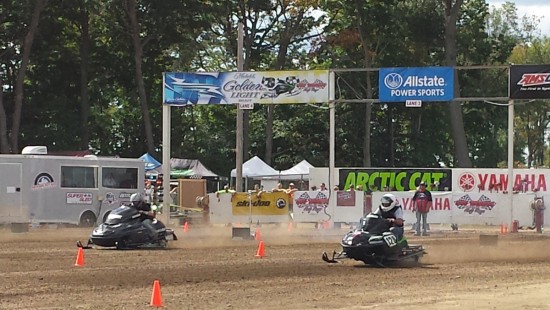 Haydays is just one of half a dozen stops on the NHSRA (National Hot Sled Racing Association) series.

Every year it seems that Haydays gets bigger and more exciting. In fact, other forms of fuel injected fun continue to evolve to entertain the crowds.

TerraCross racing is a new closed course event with ATVs and UTVs–which sounds a lot like a motocross race with more wheels until you come to the obstacles embedded in the dirt terrain. Yup. There are tires, boulder fields, log jams, and well, you’ll have to keep your eyes peeled to get it all figured out! Check out the TerraCross association to learn more: http://www.terracrossracing.com/

The athletes competing here come by invitation only, so you know you’ll find some of those X Games gold medalists like Minnesota’s own Levi LaVallee and backcountry rider, Chris Burandt.

And of course what would a race day be without a little snocross, even without the snow–the ISOC Snocross feature ran at noon on Saturday with finals later in the day.

Maybe you’d like to watch the diesel drag truck and mobile rear wheel dyno machine? How about a demo ride of your own on a an ATV or UTV? And for the youngsters, the kids from Traxxas compete with their radio controlled cars.

There truly is something for everybody, so, book your date for 2016! I sure am. See: http://www.snobarons.com/