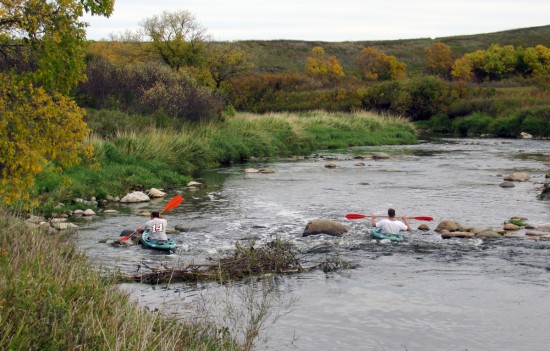 Kayakers dip their paddles into the creek waters, still warm from a dry, hot summer–their path, however, is nearly blocked by a jagged row of rocks. The first man chooses his line, pushing towards the creek side, where his kayak lodges. The second, cheering as he pulls ahead, shoots through the center, carried over the rocks by the stream without a hitch. A few minutes later, they’re both out of sight, laughing and paddling around a bend of Wascana Creek.

Even though the Wascana Valley Nature Recreation Site, where the creek runs, is only 50 miles from where I live in Qu’Appelle, it was my first visit.

The name, Wascana, is from a Cree word, oskana, which means “bones,” and was given to the creek by explorer, Captain James Palliser, in 1857. And there were indeed many bones back then, since according to Cree beliefs the huge six foot high, forty foot diameter, pile, was maintained to ensure that there would always be bison in the area. 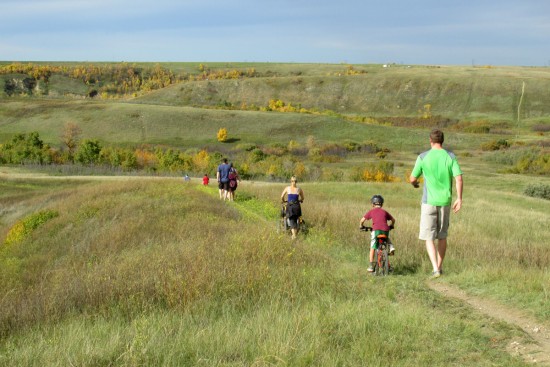 Hiking and biking along the rim of hills in Wascana Valley.

Wascana Creek is a tributary of the Qu’Appelle River, which flows through a 14000 year old glacial spillway that cuts across Saskatchewan from west to east. The creek and its tributaries drain what seems to most to be 2200 kilometers (around 1367 miles) of flat prairie, starting near the small town of Vibank, and wandering southeast, then west, and finally northwest into the Qu’Appelle River just west of Lumsden. 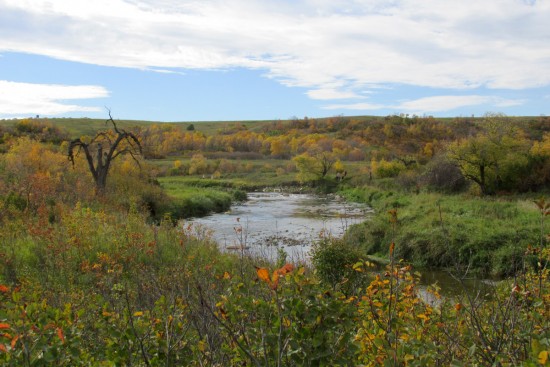 Most of the creek’s path is little more than a narrow cut across the prairie except for Wascana Lake (created in the early 1900s) in Regina, with the Wascana Valley Nature Recreation Site a much enjoyed anomaly. 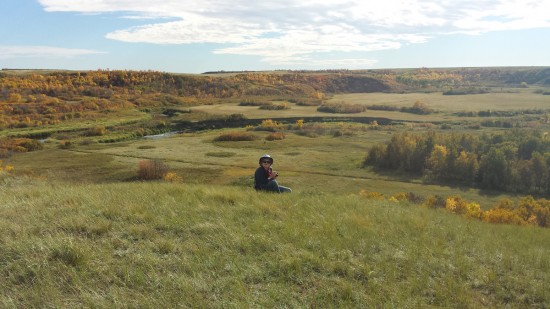 Wascana Valley is a natural valley carved out of the prairie into a landscape that lends itself to year-round recreational activities from hiking and biking, to cross-country skiing and snow-shoeing once the snow comes. The fall day I visited was exquisite, from the colorful leaves to the crisp fall air. 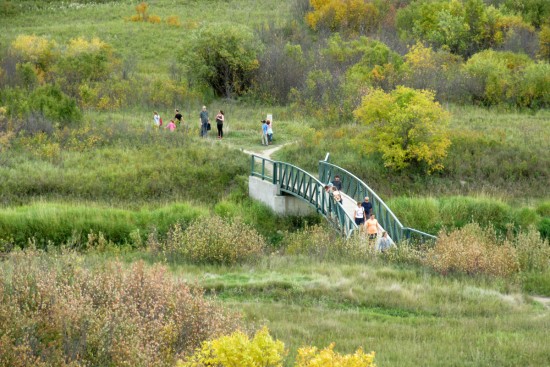 Bridge over Wascana Creek on the hiking trail.

Now that I’ve discovered this prairie treasure, I’ll be going back!