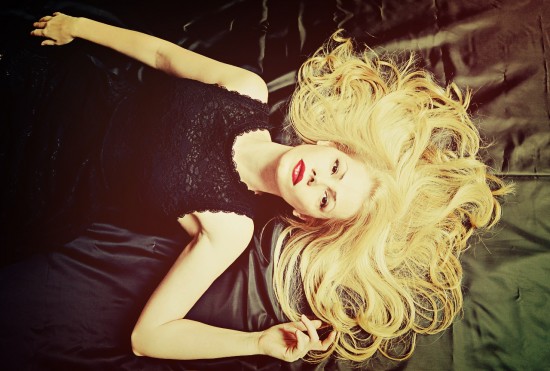 Photo from the Vintage Collection at Amy Harrop’s blog.

Some nights the best place to be is a dingy bar out in the middle of nowhere–or at least a somewhere that’s equipped with a bottle of booze and a piano. Sam Galahad finds just that somewhere in the The Red Eye Lounge, with the piano player, Buddy Toupee.

If you’re thinking this feels like those old dime store paperback mysteries, you’re right. Naturally, the cast of characters is completed by a blonde and a body. Dead of course.

I grew up on those hardboiled paperbacks, corners tattered, and pages yellowed with age. A subgenre of mysteries and detective novels, hard-boiled stories feature an introspective detective and cast of offbeat characters that offer a nice break from reality.

So, I purchased front row seats for the play, Gunmetal Blues: The Musical, based on the novel by Scott Wentworth. It had opened up off-Broadway in 1992, and arrived in Regina, Saskatchewan, after making its rounds through North America, just in time to celebrate the 50th season of the Globe Theatre.

The Globe Theatre was founded in 1966 by Ken and Sue Kramer. While it had some adult performances, the focus at the time was in visiting schools across Saskatchewan—and it just happened that I was one of the students lucky enough to see a few performances. I was hooked! Since then, I’ve had a number of season passes and attended dozens more productions at the Globe in its permanent home, Regina’s old City Hall, where it moved in 1981. 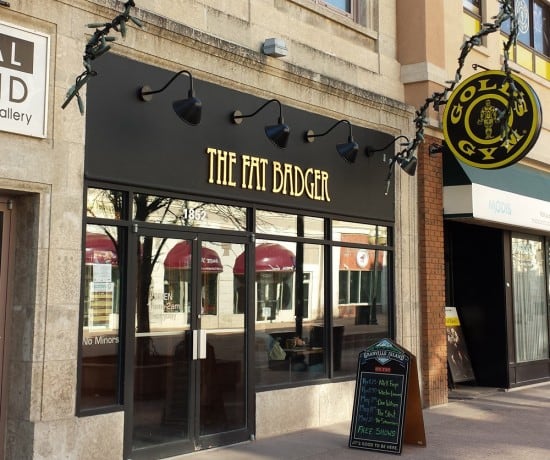 Theatre always begins, at least for me, with a dinner out in a restaurant as close to the venue and parking as possible. Luckily, there’s lots to choose from in downtown Regina.

Surveying the options, I selected The Fat Badger, which had recently opened in the Scarth Street pedestrian area.

The Fat Badger has a great pub atmosphere–dark woodwork and tables, comfy well padded chairs, a charming assortment of vintage pictures mounted in random (at least to me!) configurations on dark green wall covering. If not for the well-stocked fridge of beer beside the bar, I could have imagined myself in London, getting ready to attend a play at Shakespeare’s Globe Theatre in London.

But the real test of a pub is in its food, isn’t it? The Fat Badger delivered all I expected and more! I opted for the Tuesday night Badger Burger special: Greek (Spinach, feta, and tzatziki). Rather than taking a side, I selected the burger with a pint of beer for the special price of $15.00.

Most “house” burgers are basically just a loaded cheeseburger, but not so the the Badger Burger special. It came on flatbread, rather than a standard bun, along with a homemade mildly seasoned patty. Delicious! 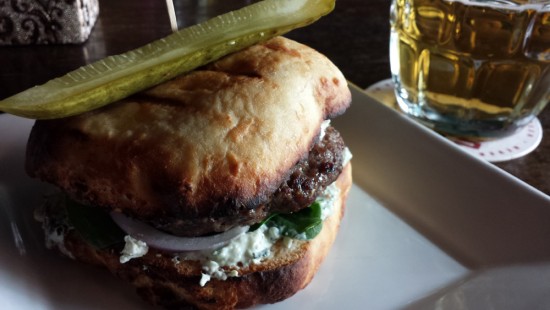 There are no “bad” seats at the Globe Theatre, since it’s built in the round, like its namesake in London. I did, however, end up in a perfect location, just a few feet away from Buddy Toupee, the piano player, who was also the narrator of the story.

Like all good mysteries, there were lots of twists and turns in the mystery as Sam Galahad, the detective, was hired by Laura Vesper, the blonde dame, to investigate the murder of a wealthy heiress whose father also died under mysterious circumstances. As well as being a hardboiled classic, Gunmetal Blues is also categorized as a film noir musical, in its bleak post-war setting.

I can guarantee, however, that you won’t go away feeling down even with the bleak moments the characters experience. There’s lots of humour in the play and the music is great, too.

Attend a Performance at the Globe Theatre

This year’s 2016-16 line-up for the Globe’s 50th Anniversary season features something for everyone, ranging from musicals to Shakespeare to the magical Snow Queen from Hans Christian Andersen.

The theatre is located at 1801 Scarth Street in Regina.