Travel adventures with a twist of history!
;

Quebec Canada is an amazing city to visit at any time of the year, but it’s especially fun to spend time in during December when there are many additional things to do!

Dating back to 1608, Quebec City was established by Samuel de Champlain, whose statue stands at Dufferin Terrace in the city. Today, it’s the oldest walled city north of Mexico.

Now, let’s look at some things to do in December as the holiday season approaches. 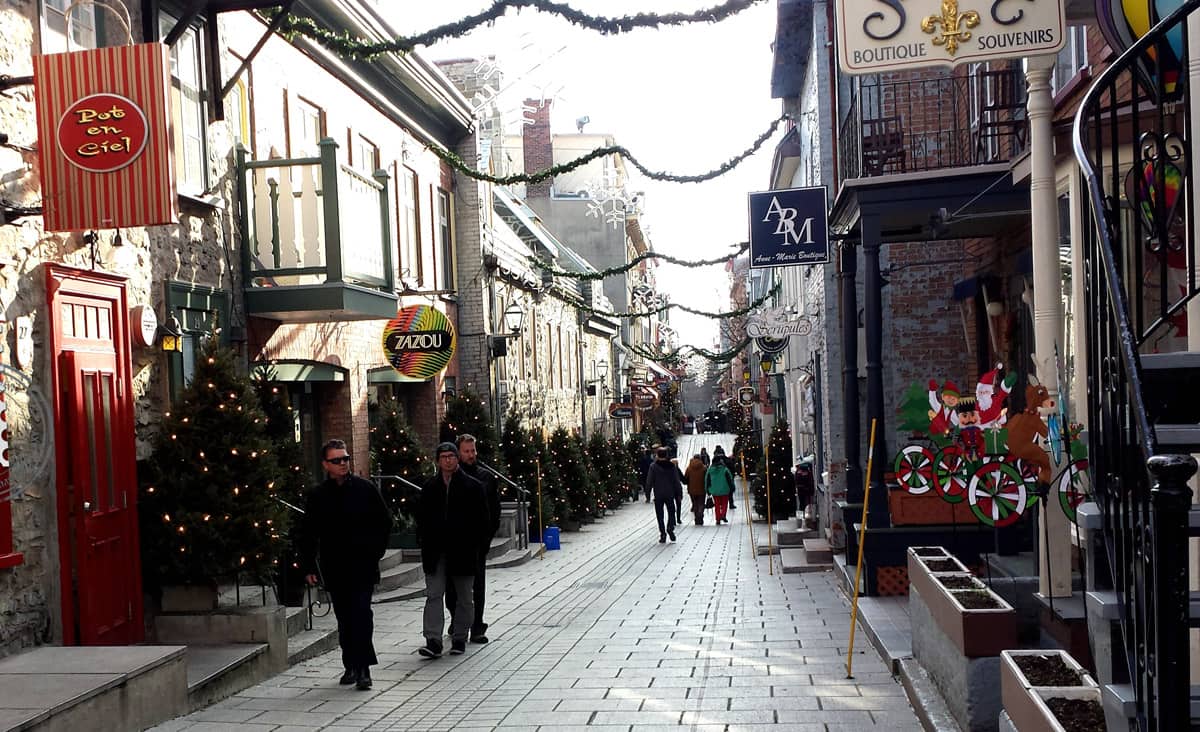 Christmas trees lined Quartier Petit Champlain–one of Lower Quebec’s oldest, most cultural streets. Here the history of the buildings is marked, not by decades, but by centuries. Offering everything from sweet treats to clothes and accessories, it’s the perfect place to stroll as you think of holiday gift giving.

The Canadian Institute of Planners named this street Canada’s Great Street in 2014 for its 29th birthday. This piece of Quebec Canada history–many buildings date from the 1600s–is now home to a vibrant arts and cultural community that’s a joy to visit.

I popped into half a dozen stores, soaking up the festive feel of the holiday season. Then, when my feet were tired, I relaxed with a bowl of tasty beef barley soup and a cup of steaming hot chocolate at the cozy Restaurant Le Casse-Cou. 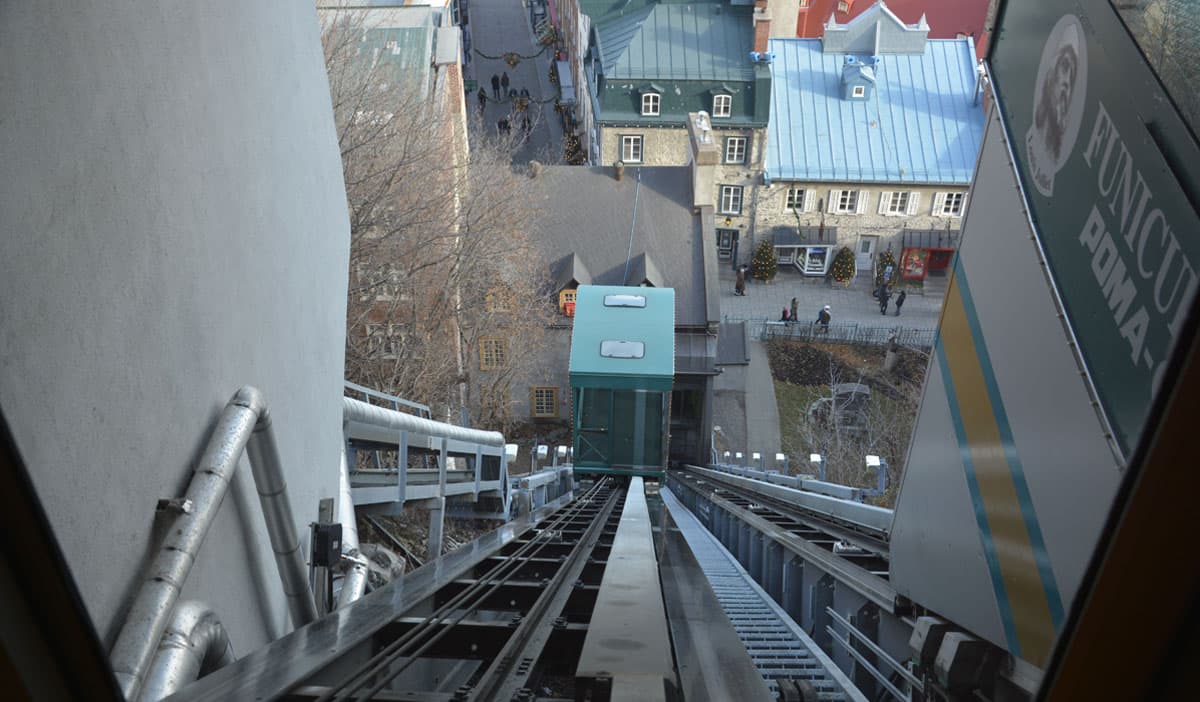 I’ve only ridden on one other funicular, and that was in Switzerland–the Haderbahn Funicular–so I was thrilled to find the Quebec Funicular here in Canada. Here, the purpose of the funicular is to take you from the Upper level of Old Quebec to the Lower. Since the city was built in a location to make it easily fortified, Lower Quebec is at the foot of Cap Diamant (Cape Diamond in English), the cape and promontory where Quebec City is located beside the St. Lawrence River.

And the funicular–well, it’s a vertical rise that goes down at a 45 degree angle! At 195 feet high and 210 feet long the trip up and down doesn’t take long, but it saves steps and is lots of fun for the kids.

You’ll find the main entrance of the funicular in the historic House Louis Jolliet, built in 1683, at 16 Petit-Champlain Street in the heart of Old Quebec and near Place-Royale. 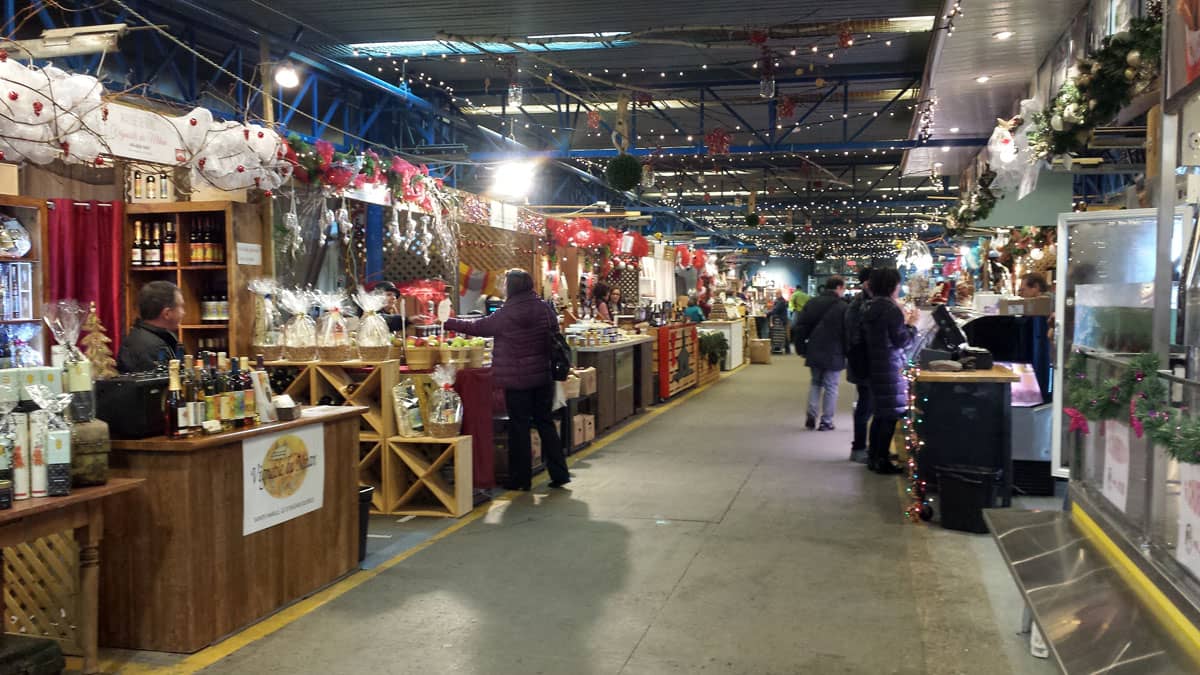 There’s no better place to find fresh foods, great deals, and unique buys than at a Farmer’s Market, and Marché du Vieux Port (Quebec City) is no exception. Some of the deals that amazed me were in the fresh produce–a bag of apples twice the size of one I’d just paid $9 for back in Regina was priced at $3.99. And it was just one of many!

The Farmer’s Market also had crafts, kitchen accessories, and my favorite–tins of locally produced maple syrup. Mmmmm! One local producer displayed shiny silver jugs of oils and vinegars, and others offered liquors for sale. While I love dining out in Quebec, I almost wished I’d had access to a stove so I could try out some of the homemade pastas and sauces. I could have spent hours shopping, but unfortunately, my luggage only had a room for a few special items I couldn’t resist. 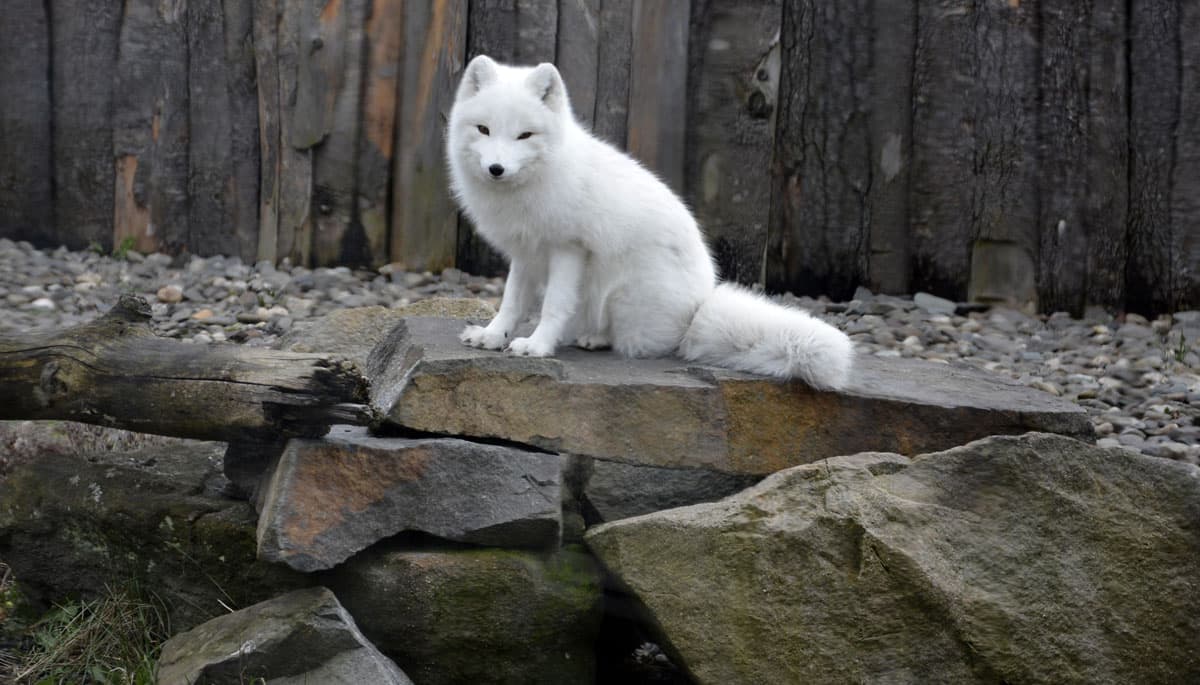 December in Canada ultimately means a change from summer’s greens and fall’s oranges and browns to a world of white snow–and in the animal kingdom, many animals turn from darker shades of brown to white to blend in with the environment too. But the white fox (Arctic Fox) doesn’t have to change, since its coat is always lightly colored.

The white fox is Canada’s smallest wild canid, at only 30 inches (75 cm) to 45 inches (115 cm) long. This beautiful creature is specially adapted to life in colder weather with small ears and short legs.

You may surprised to know that you’ll find this little fox at the Quebec Aquarium. I know I was! However, the whole family will enjoy meeting local fish, reptiles, amphibians, invertebrates, and sea mammals along with the white fox when you visit. 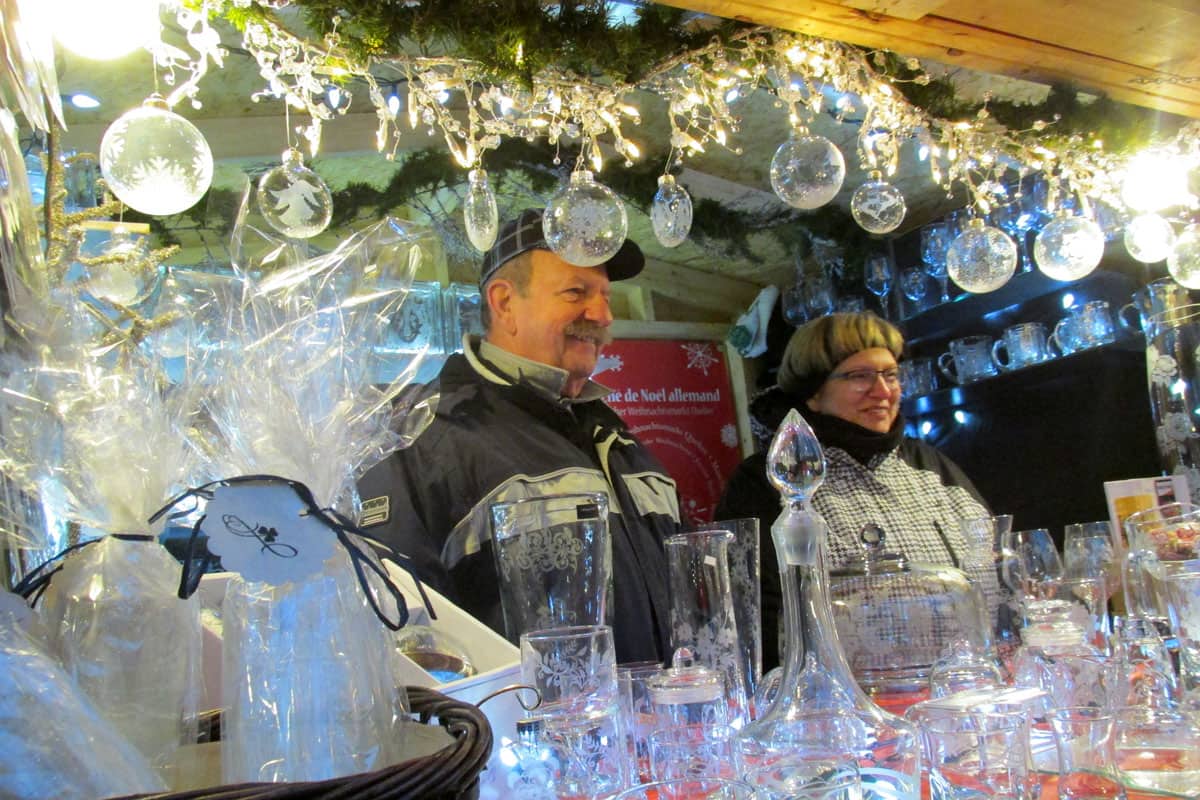 While Quebec City is predominantly French, its heritage is enriched with various other cultures. The German Christmas Market was started to bring a taste of the Old World to its German inhabitants.

I’d never been to a German Christmas Market, although I’d certainly read about the tradition. So, I was pleased to be in Quebec City for the season, and get to sample various traditional German Christmas foods (imported from Germany) as well as see some of the authentic holiday decorations.

As you might expect, the Market is also enriched with the centuries old traditions of the area, so you’ll find mittens and maple syrup and warm knitted woolies. My favorite stop was the Winterbar for a glass of warm Gluhwein wine! You’ll have to hurry down for yours though, as the German Christmas Market only runs for three and a half weeks annually.

I’d like to thank Quebec City Tourism and Quebec Tourism for hosting my visit to Quebec Canada, one of my favorite destinations! If you’ve visited Quebec Canada, please tell us what you enjoyed most in the comments below.

More Things to do in Quebec

The photo in the header above was taken of the wall around Old Quebec by Linda Aksomitis in Quebec City, Quebec, Canada.