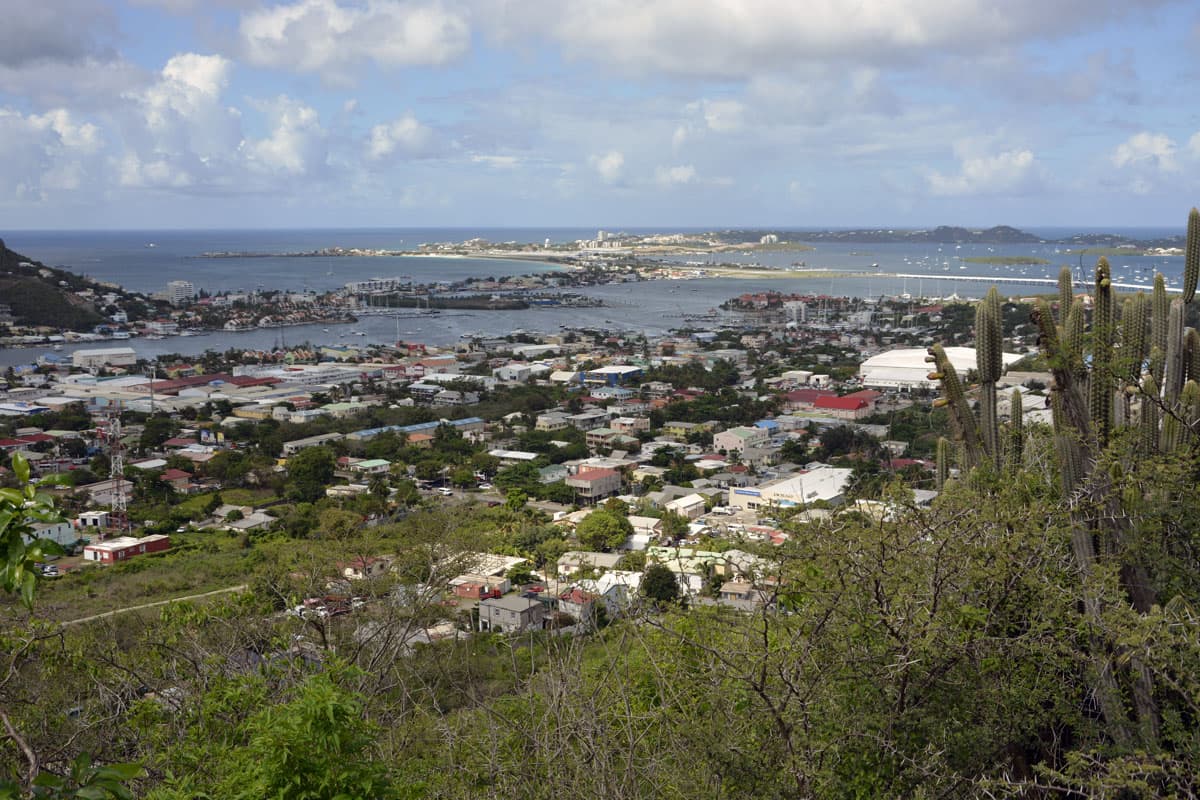 Isla de San Martin, today’s St. Martin Island/Sint Maarten, must have seemed to be a green gem in the Caribbean Sea when Columbus became the first European to see it on November 11, 1493–St. Martin’s Day. It was Columbus’s second Caribbean trip and whether he made a brief stop on the island paradise or sailed right on by varies according to the source. We do know, however, that he claimed the island for Spain.

Fast forward a few decades and buccaneers sailing the seas in search of treasure coveted its plentiful salt supply, calling it Soualiga, Land of Salt. The Spanish, however, still weren’t interested in settling it.

It wasn’t until 1648 that ownership of the 88 sq. km island was settled, dividing it between the French and the Dutch, creating the dual nationality that still exists today in peaceful harmony–earning it the nickname of the Friendly Island.

I spent a half day on this friendly island as one of the stops on my Caribbean cruise on board the megaship, Oasis of the Seas, with Royal Caribbean. I’d booked a 4×4 St. Maarten and Beach Escape on board the ship, so my guide–and 4×4 jeep–were waiting for me when I arrived. 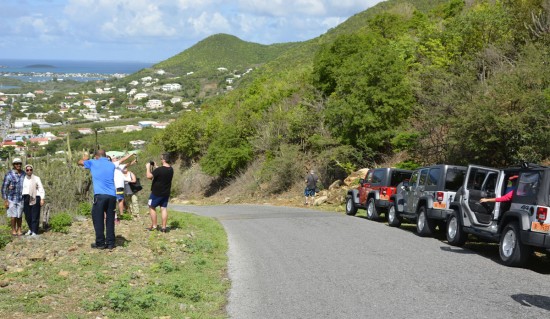 Jeep tour pulled over at a scenic overlook.

Our guide, Cecil, introduced himself and divided the group of 30 or so travelers into jeeps, when we got off the bus that had transported us from shore to the staging area. I joined three others from the Oasis of the Seas, and we selected a jeep–a bright copper one that stood out in the caravan. We all gave copies of our driver’s licenses, so we could split the driving up between us.

The good thing was that unlike the two other islands we’d stopped on (Nassau in the Bahamas and St. Thomas in the Virgin Islands), here, we drove on the right side of the road, rather than the left. Easy-peasy!

Some things were just like driving through any town at home, like the Coors Light beer signs everywhere. Others, not so much, like the roundabouts that took the place of traffic lights. 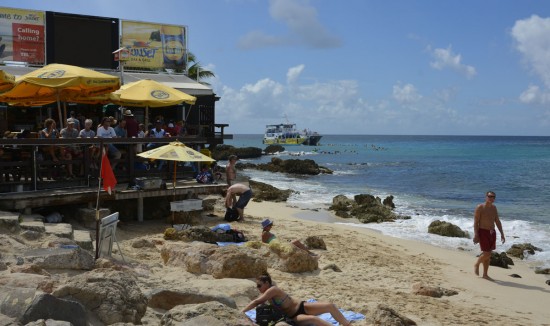 The first thing we did was head straight up a hill out of town, giving us a great view of the Caribbean Sea and the ship, where it was docked on the Dutch side of the island–St. Maarten. While there certainly weren’t any shoulders on the road to make it easy to pull over when part of our convoy disappeared in traffic, our guide did a great job of making sure we were all behind him.

It reminded me of a trail ride I took in Montana, where our horses lined up nose to tail on the trail, like kids playing follow the leader in a kindergarten classroom.

We stopped for a few photo opportunities before reaching the airport on Maho Beach, one of the world’s most popular spots for plane spotters (Who even knew there was such a pursuit as plane spotting?)

It was no surprise that the border crossing came quickly since the island was so small, but what I did find surprising was that we had to go through an actual border crossing to get to the French side, St. Martin. 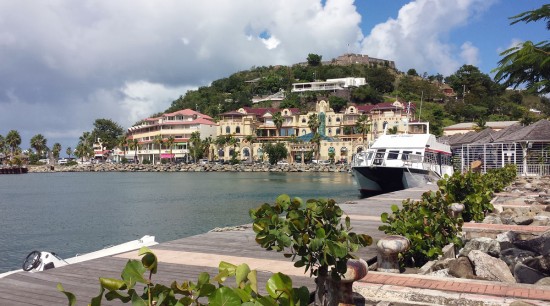 Marigot Bay Harbor with Fort Louis on the hill in the distance.

St. Martin’s business signs and names were for the greater part in French, although some English signs popped up here and there. Never fear though, as English is spoken pretty much everywhere since tourism is the most important industry no matter which side of the island you’re on.

We switched drivers and it was on to the Marigot Open Market, located on the harborfront of the capital city of Marigot on St. Martin. Full of the usual array of bright island shirts and dresses, as well as other souvenirs, there were also a number of restaurants. 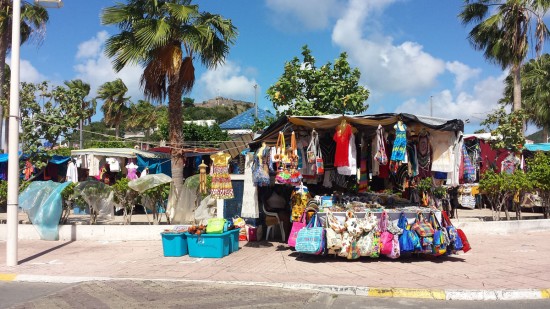 While I didn’t make the trek to check it out, Fort Louis sat on a hill overlooking the Marigot Bay harbor, serving as a reminder of the sometimes turbulent past. 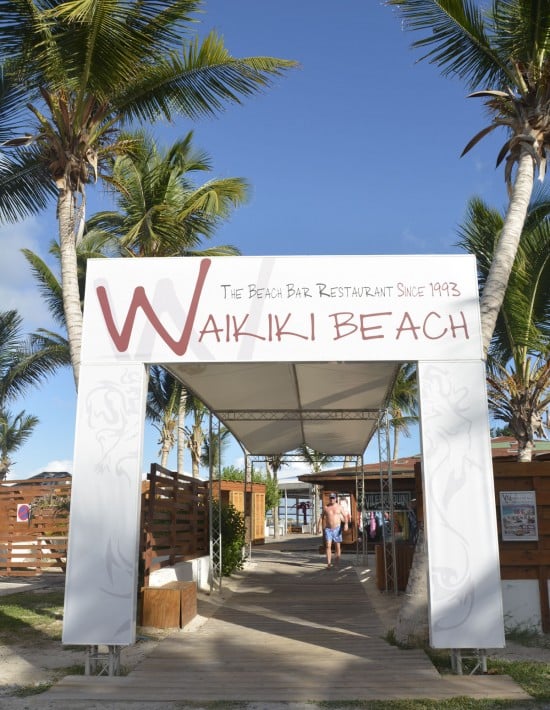 Our stop at the market didn’t leave time for lunch, so we headed to Waikiki Beach where we finally found a little mud on an unpaved road. This beach not only gave us a new view–it also gave us a whole new body of water, as it’s situated on the Atlantic Ocean side of the island, rather than the Caribbean Sea.

Lunch was a tasty buffet of local vegetables and fish, along with cold beer, in the air conditioned Beach Bar Restaurant.

Afterwards, I joined the beach lovers lounging on the sand. Behind us, the local economy was hard at work with middle-aged women walking back and forth, hawking their wares–hats, bags, and scarves. In front, the ocean was filled with water lovers enjoying every sort of sport from swimming to wind surfing. 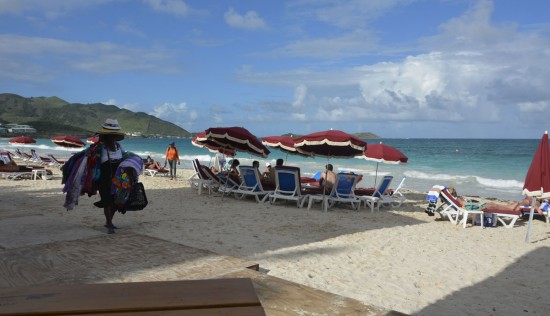 Woman selling wares on the beach.

And finally, after dipping my bare toes into the sand, then letting the Pacific wash it away, I climbed back into the jeep and headed across the island to continue my exploration of the Caribbean, on the Oasis of the Seas.

Thanks to TBEX and the organizers of the first TBEX at Sea and its sponsors.