Nassau, Bahamas, is a popular spot for cruiselines to dock–and it’s no wonder with all the natural beauty and attractions the island has to offer. From family to fitness to romance, there’s a cruise suited to your dream vacation headed to this destination! Or, if you’re looking for an all-inclusive beach vacation, there’s one to suit every budget.

I arrived on the Oasis of the Seas, one of the Royal Caribbean’s megaships. However, I booked my tour on shore rather than through the ship, so it would be something any visitor could get. The cost–just $20–was one of the biggest bargains of my trip! Here are some of its highlights. 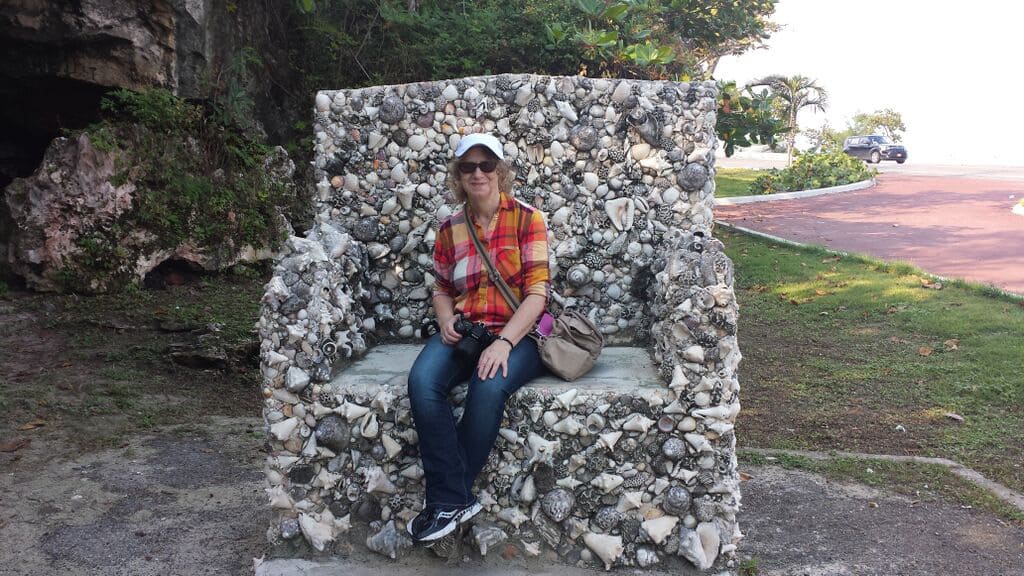 Linda Aksomitis in a chair made of shells near Cable Beach.

Luckily for me, I was the only passenger without companions who boarded our open tour taxi, so I was up front with the guide, a young musician-by-night, Patrick George Washington. The first thing that surprised me as we left the dock was that we were driving on the wrong side of the road. Why? Well, the Commonwealth of the Bahamas was a British colony from 1718 until 1973.

Cars on the island, as Patrick explained, are expensive commodities, since they have a huge additional tax added to them. And, while you drive on the left side of the road, vehicles may have the steering wheel on the left or right side. Imagine getting used to that!

But back to the chair that showcased the many types of shells you can find walking the beach. It was king-sized, so I felt like a little kid with my feet dangling over the edge! It’s a great place for a photo opportunity if you’re near the west end of Cable Beach. 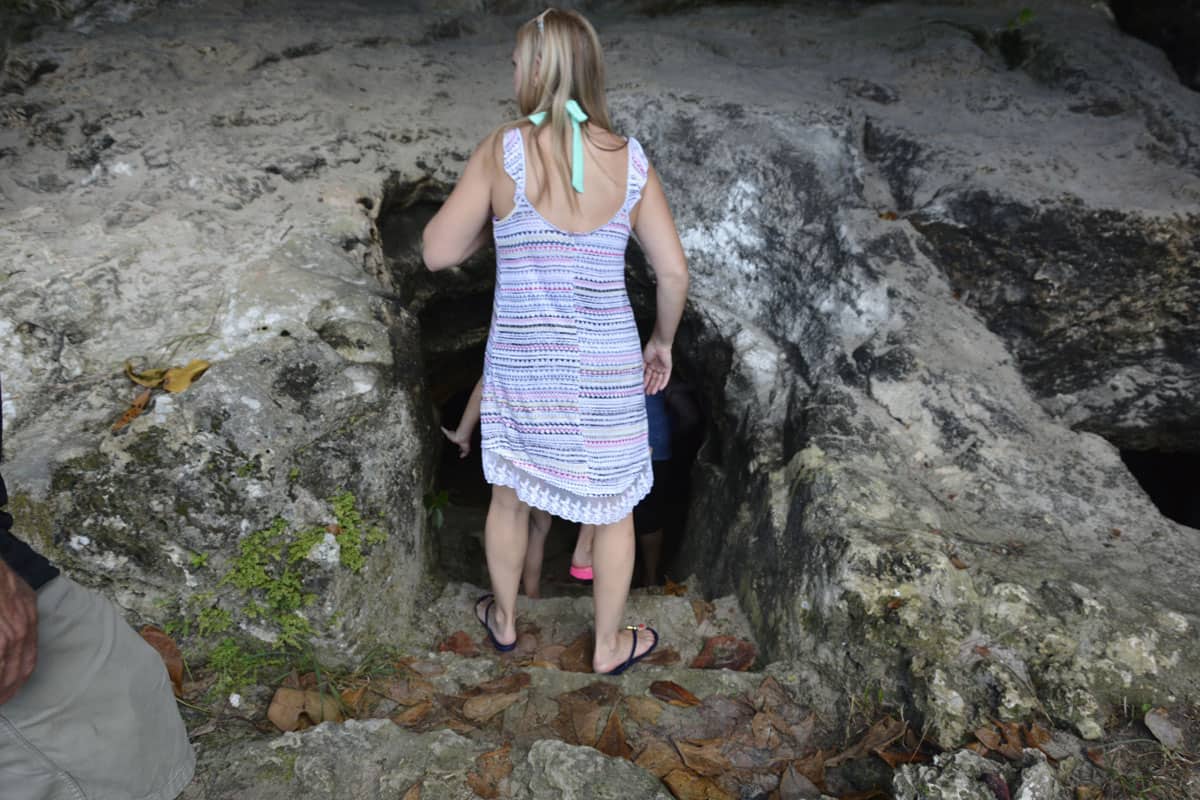 The Caves on Nassau, Bahamas.

The shell chair is located at the pull-off on the edge of the road where you’ll also find The Caves, which are identified as a national treasure. Their entrance is almost invisible. Once you twist into the opening, you’ll find a narrow crevice likely little changed since pirates were rumored to have hidden their treasure in it hundreds of years ago. Today, however, it’s main inhabitant is the fruit bat that’s indigenous to the Bahama Islands. 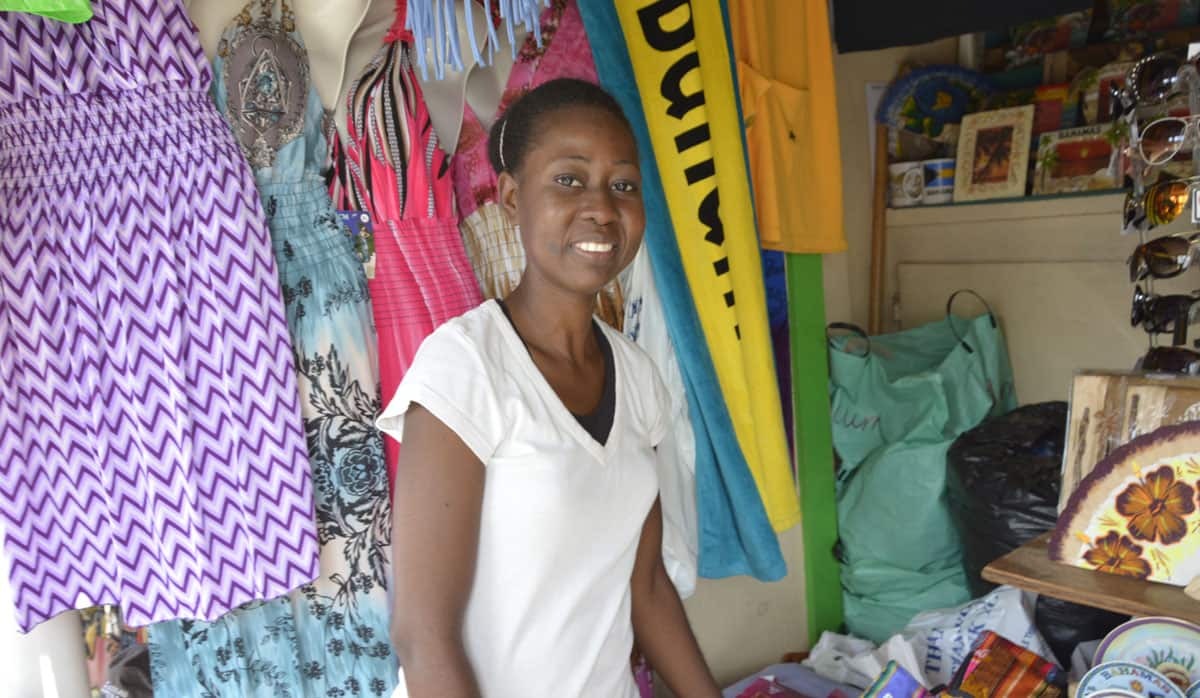 Back in our taxi, Patrick had lots to share about the local culture. As you might expect, the main diet is fish and rice. The official language is English, which makes it easy for tourists to barter when they hit the market!

Visiting a local market is always fun, providing a great opportunity to buy some souvenirs to take home. Here, I purchased a carved wooden ash tray in return for some photos from the shop owner, a young woman named Charlene.

I wasn’t surprised to find the island had been fortified for protection–mainly from pirates. While the Bahamas were where Columbus first landed in 1492, Nassau was mainly ignored until the mid-1600s when the English decided to colonize it.

Fort Fincastle was built to protect the island of New Providence and the Nassau Harbor. Two other forts also remain standing in the Bahamas: Fort Charlotte (the largest) and Fort Montagu (the oldest, built in 1742).

While it’s small, there’s lots to see inside the Fort and it has good signage to provide the history. A small fee of $1 gives you access to the interior.

Bird’s Eye View of the Island 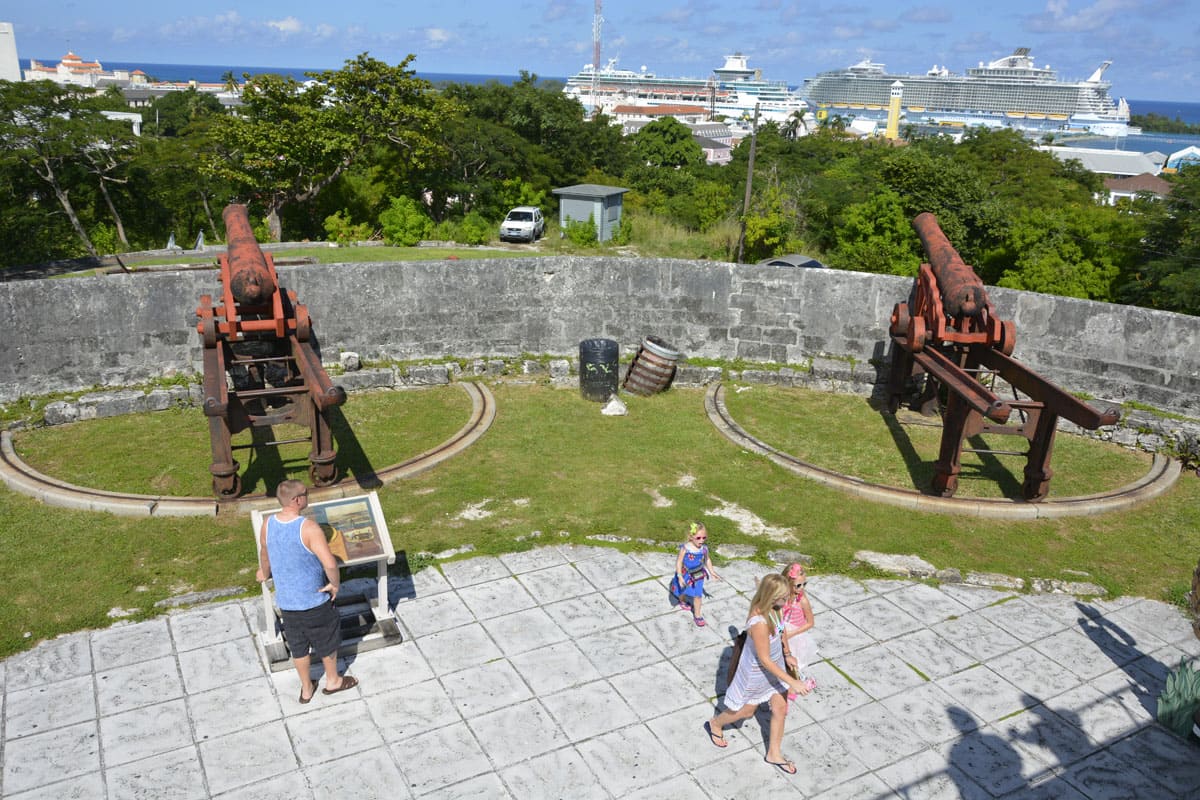 Once you enter the Fort, you’ll have to climb the narrow staircase to the lookout area on top. There, you’ll find a great view of the island and be able to see how close you really are to the harbor! 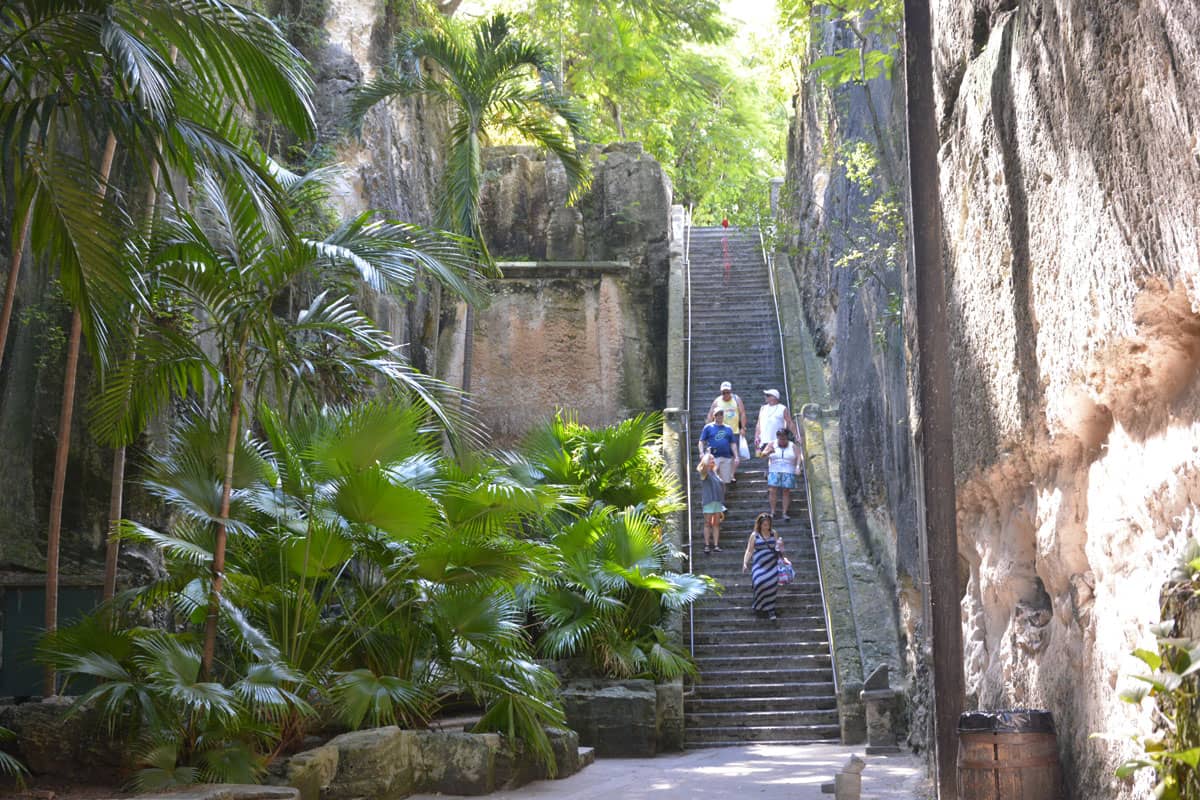 The Queen’s Staircase in the Fort Fincastle Historic Complex.

While you’re at the Fort Fincastle Complex you also have to see the Queen’s Staircase–whether you choose to walk up or down the 65 stairs (the 66th step is now hidden in the concrete walkway) or drive around to the wheelchair accessible area.

The stairs were started in 1793, and are reported to have taken 6000 slaves 16 years to carve out of the rock. It’s no wonder another name for the them is the “Freedom Steps.” 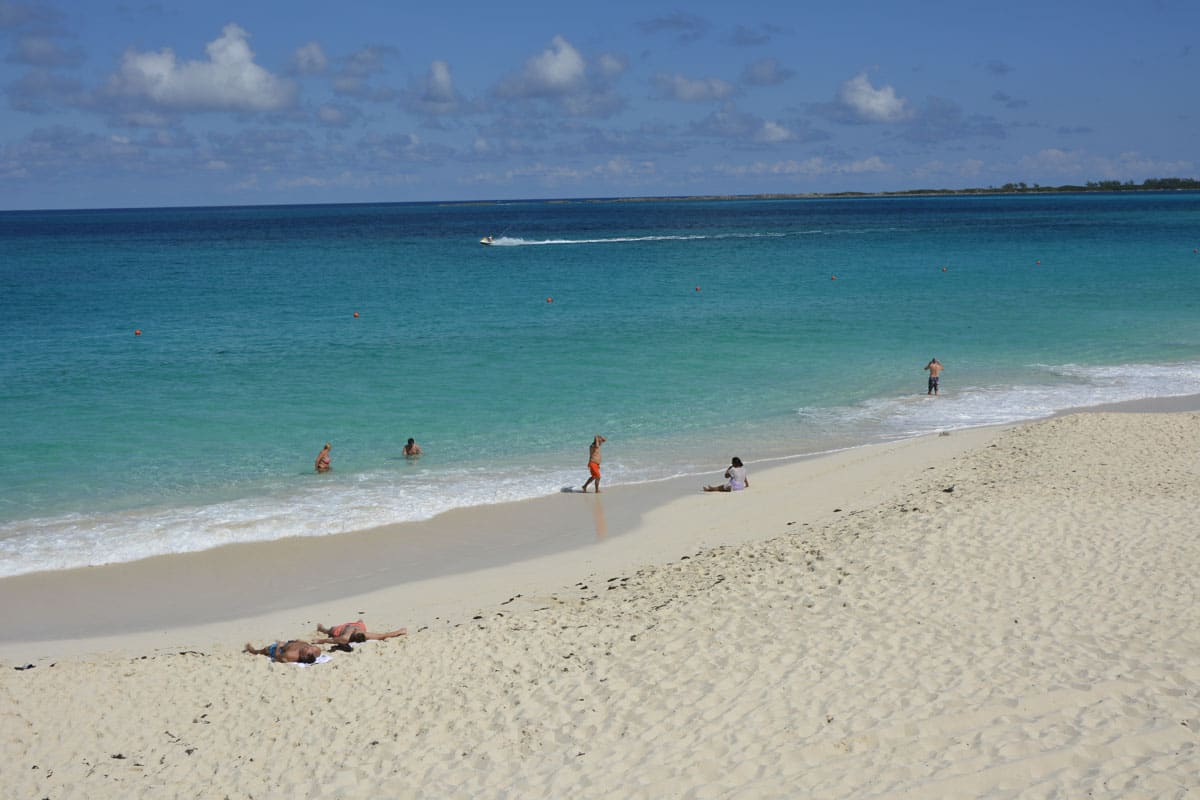 Beach in the Bahamas

No matter where you go on the islands in the Bahamas, you’ll find the white sand and turquoise water the Caribbean is so well known for. If you’re staying at a resort you’re likely just a few steps away! However, if you’re exploring from a cruise ship or just wandering around the islands you’ll find there are half a dozen free beaches open to the public.

Patrick brought us to this one, which had no life guard but was next to a well-equipped Mini Mart. 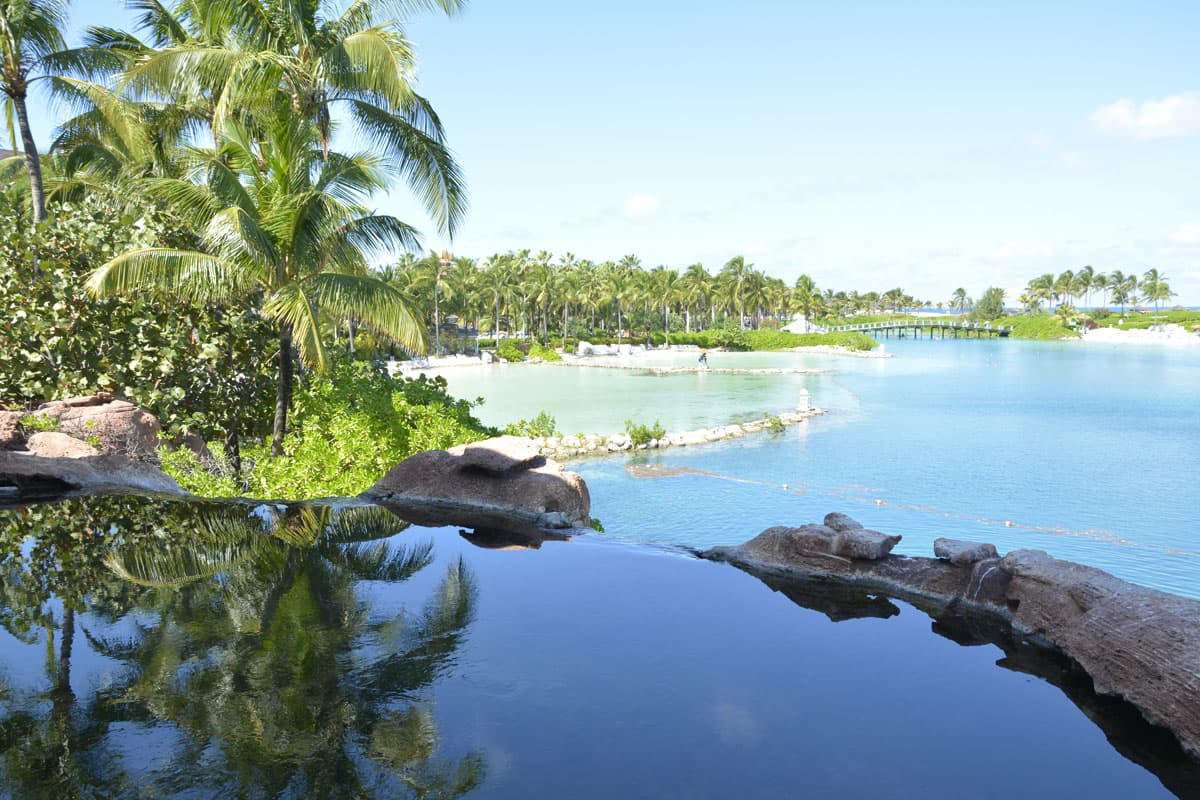 Paradise Island is connected to Nassau by a bridge and toll road. The island, originally called Hog Island, was once the private estate of the Swedish entrepreneur Axel Wenner-Gren. Nowadays, as Patrick told us, you can still purchase an island of your own if you have $200 million or so in the budget. Only 29 of the Bahamas’ 700 islands are inhabited, so there are lots of adventures still available! 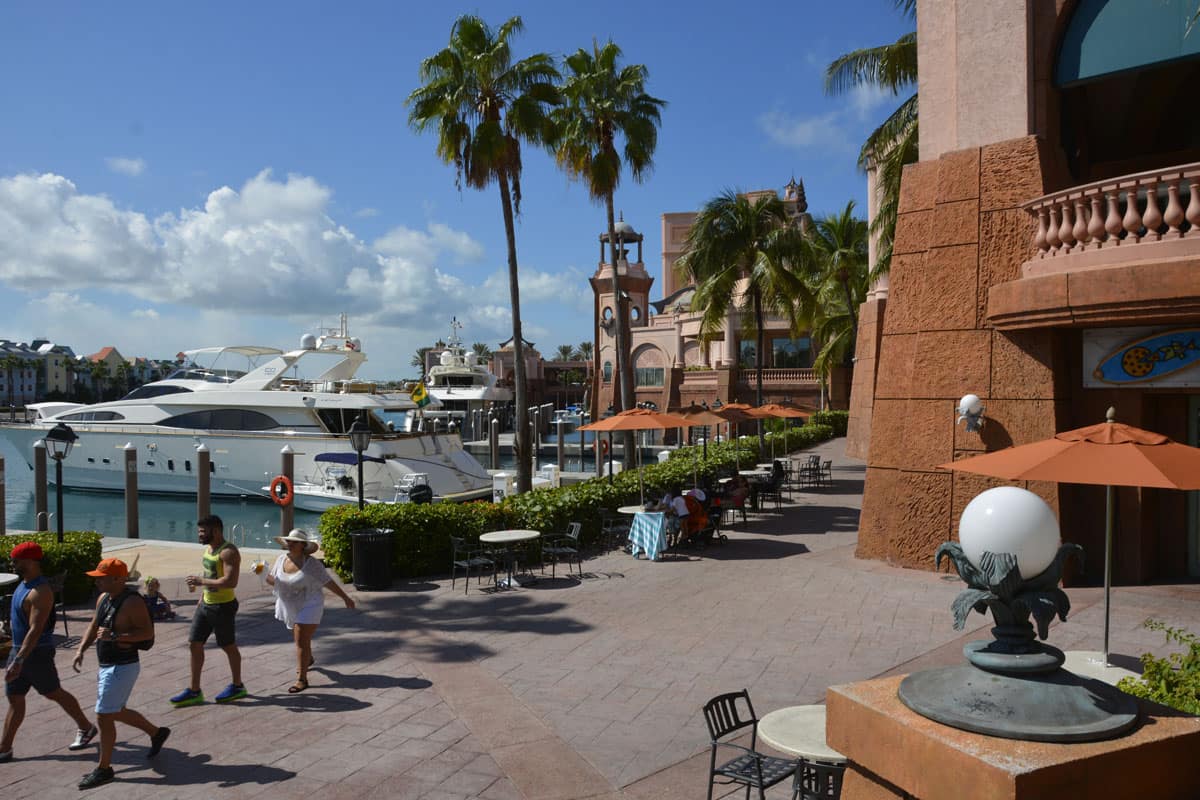 While we all dream of Atlantis, the fabled lost city, you can find the Bahamian version of it on Paradise Island. And if a stay here isn’t in your budget you can walk through the casino and out onto the back patios just to check it out! (You never know whose yacht you’ll see in the marina either)

Have a local beer! 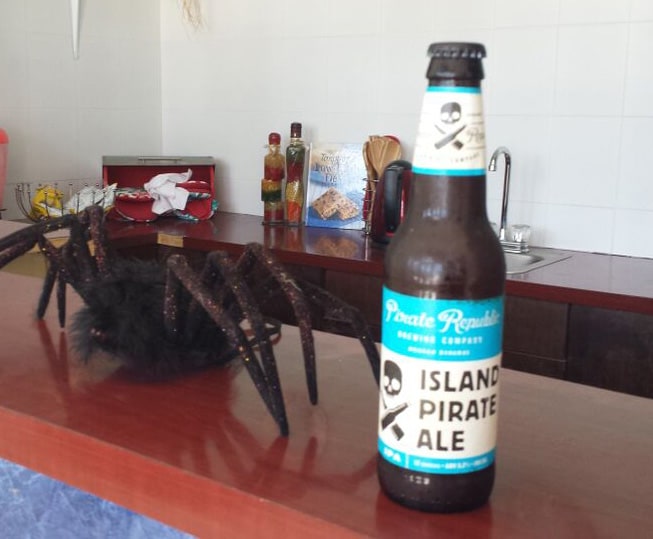 And of course, all good journeys end with some local flavor. Here, I found Island Pirate Ale, made by the Pirate Republic Brewing Co. in Nassau. It’s the first ever Bahamian India Pale Ale beer, and has an alcohol rating of 5.2%, so is a little stronger than the light beers I usually drink. I found the flavor enjoyable (hoppy ale, with body and smooth, delicious complexity), especially after a hot afternoon walk to the beach!

Here’s the YouTube video my tour guide put out!

If you’ve had a great time in the Bahamas, please share in the comments area.