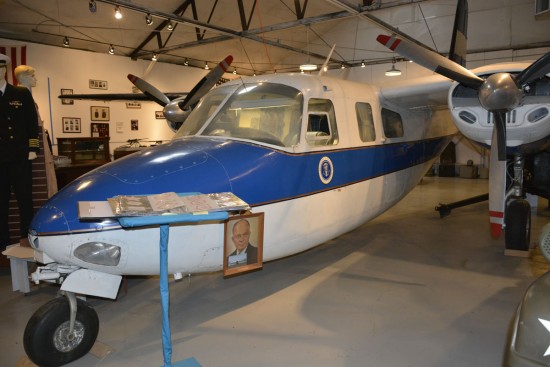 Houma is a small city in Southern Louisiana, deep in the heart of Bayou Country. It truly is a place full of joie de vivre, or love for life!

This 1956 Aero Commander 680 airplane is the main attraction of Louisiana’s Regional Military Museum in Houma. Can you guess the plane’s claim to fame? (Click the tabs above to find out!)

Seal of the U.S. President on the Air Force 1 plane.

This airplane used by President Dwight D. “Ike” Eisenhower was the first Air Force One plane (along with a sister plane housed in Dayton, Ohio at the National Museum of the U.S. Air Force) to display the presidential seal. President Eisenhower introduced the unique call sign, Air Force One, in 1959. The plane is a six-seater with a wingspan of around 44 feet, and flew the president around the U.S.  When it was replaced for presidential service by newer jets, this plane was used by the Air Force Academy in Colorado for skydiving exercises.

The Air Force One plane was moved from storage in Patterson, LA, where it had been from around 1984, to the Houma Regional Military Museum in 2010. Its trip included land transport as well as barge up the Intracoastal Waterway. Along with the plane, the museum has over 8000 artifacts ranging from jeeps and motorcycles to uniforms and guns. A replica of a World War II Grumman TBF Avenger torpedo bomber suspended from the ceiling is one of the main displays in the new building, a 6000 square foot add-on to the original 1946 building.

With artifacts from every war in U.S. history, the museum provides a treasure trove of information. Some of my favorite artifacts included a Japanese machine gun and Samurai swords from WWII. The Houma Regional Military Museum is easy to find at 1154 Barrow St. in Houma, and has a small admission fee of $5 a person and $3 for seniors.

You can watch this short YouTube clip to see the plane being moved to the museum: