What Famous Writer Bought out his Enlisted Term at Fort Monroe in 1829? 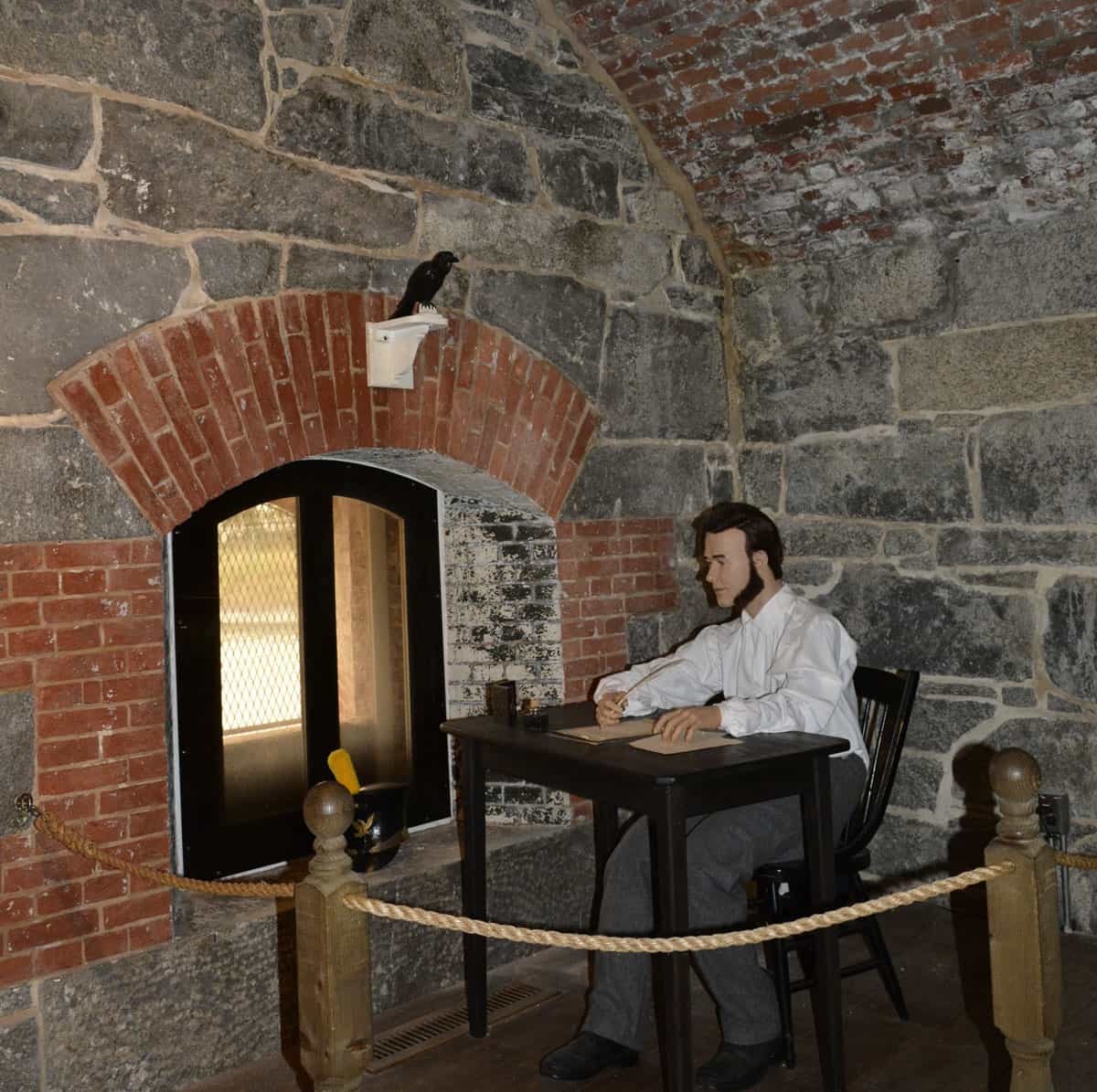 Fort Monroe, Virginia, is the largest stone fort ever built in America. It was constructed between 1819 and 1836, with the final phase directed by Robert E. Lee. The hexagonal brick and stone fort, which also had a moat, covers 63 acres and cost over $2 million to build.

What young writer arrived in Fort Monroe, December 11, 1828, and was eventually granted his discharge on April 15, 1829, after finding someone else to serve out his enlistment? (Click on the tabs above to find out more!)

Edgar Allan Poe had a turbulent history in the military. He was born in 1809, and enlisted in the army at 18 (saying he was 22) under an assumed name, Edgar A. Perry, for a five-year term, since he needed to earn money to pay off his college debts as there were warrants out for his arrest.

At first he enjoyed the army and excelled, but that didn’t last long. Eventually he was able to get an honorable discharge by having someone else take his place–and agreeing to go to West Point to meet his step-father’s demands. There, things quickly spiraled further downhill, with Poe racking up huge numbers of offenses, 66 in one month alone. Rumors persist that he even showed up for drill in just a belt in an attempt to be removed from the school.

According to the National Park Service:

The academy’s required four year commitment soon became burdensome and Poe felt it threatened his aspirations to become a writer. Unable to obtain permission to resign, Poe chose to neglect his duties. Before the end of his first year, Poe was courtmartialed for “gross neglect of duty” and “disobedience of orders.” He left West Point on February 19, 1831.  Curated from: http://www.nps.gov/fosu/planyourvisit/upload/Edgar_Allan_Poe.pdf

Poe’s first book was released at the time he joined the army, although it gained no recognition, perhaps due to the 50-book print run. He’s best known for his poetry and short stories–personally, I find his tales of the macabre have the biggest impact! After leaving military life, he went on to publish a variety of collections before his death at the age of 40 in 1849. Forty-seven titles are available for free download on Project Gutenberg.

Fort Monroe is built on Old Point Comfort on the Chesapeake Bay. The area has served as the key defensive site at the mouth of the Chesapeake Bay for centuries–in fact, the point and 1802 Lighthouse fell into the hands of the British for a short time in 1813. Built as part of the Third System of coastal defenses outlined by Congress in the aftermath of the War of 1812, Fort Monroe was decommissioned September 15, 2011, and was listed on the National Register of Historic Places.

The Fort was important during the Civil War. In fact, the Grand Contraband Camp outside the fort, founded for formerly enslaved people in 1861, was one of the nation’s first self-contained African-American communities. Jefferson Davis, the former Confederate President, spent two years imprisoned at the fort in a cell of the casemate for walls. This is now part of the Casemate Museum, opened on the grounds in 1951.

Visitors can visit Fort Monroe National Monument year-round to explore the grounds. The Casemate Museum, curated by the United States Army, has free admission–and is amazing to visit. It’s open year-round with full summer access and fewer days in the winter. The schedule is available online.