Riding the Amtrak Empire Builder Train–Williston, ND, to Portland, OR

The Empire Builder Amtrak train runs just below the 49th parallel from Chicago, IL, to Seattle, WA, or Portland, OR. I’d always wanted to ride the rails over the Rockies and this April, when Amtrak provided complimentary tickets for participants in the NATJA  (North America Travel Journalists Association) Conference in Oxnard, CA, I got my opportunity.

Williston, an Amtrak stop, is a small city in North Dakota, just an hour south of the Canadian border, and only three hours from my home in Qu’Appelle. Like the majority of Canadians, I’m only around 100 miles or so away from the 49th parallel. That makes it very convenient for us to take advantage of the excellent U.S. Amtrak train network to reach many destinations.

The train rolled into Williston right on schedule, which is the norm according to the Agent. My rail car, #2730, was the last one, so I towed my luggage over the brick path to meet Martinez, the attendant. He showed me up the stairs to Roomette 005, my “home” for the next 24 hours, and gave me the details on where to find rest rooms (most important), and food, (also important), and the viewing car. 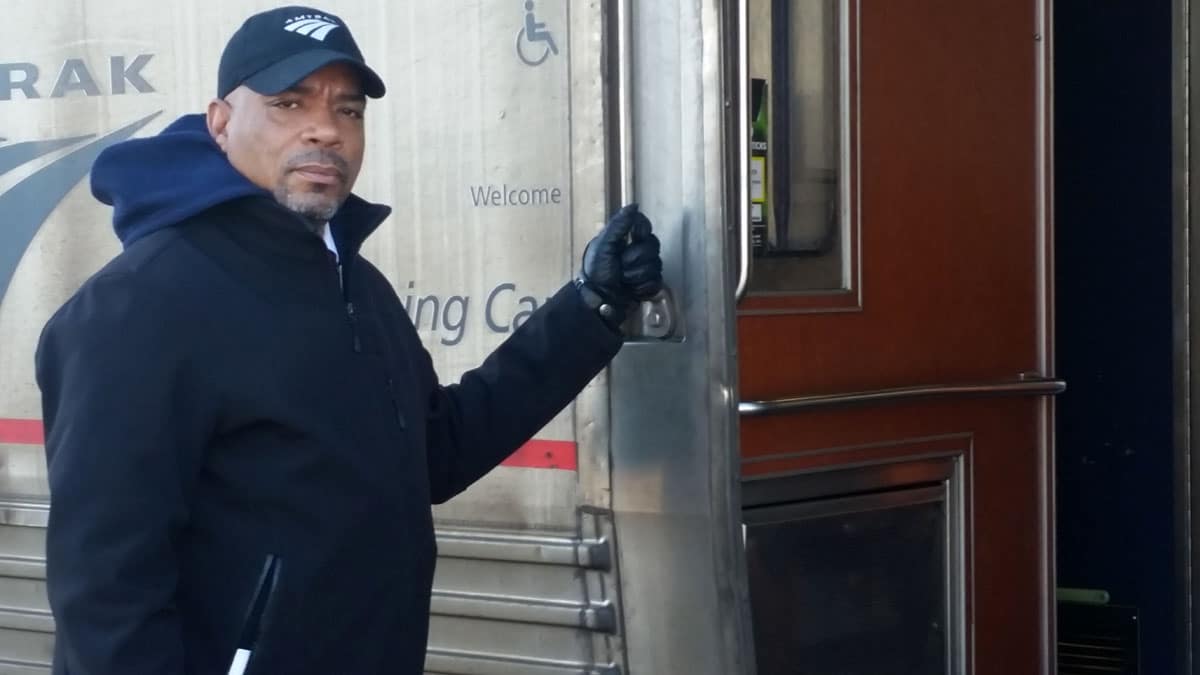 It didn’t take long to get used to the gentle sway of the train or the slight wind whistle, like a car window not completely closed. Towns began to roll by: 11:05 Brockton, 11:17, Poplar, 11:33, Wolf Point — our first scheduled stop. 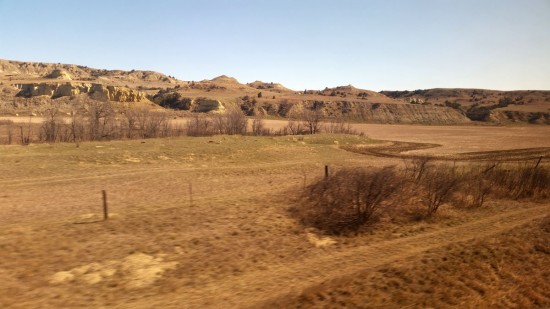 Montana stretches east and west for 559 miles, and we had all of it to cross on our way to Portland, where I’d switch trains to follow the coast of the Pacific Ocean south. As a state, it truly is big sky country, and there wasn’t a single cloud to break the blue dome overhead. Grass, still brown and withered, with just a hint of new green growth coming through, spread out over the badlands and flats, with tiny creeks winding through the dips. Small herds of cattle, sheep, even a handful of horses, dotted the landscape. Some might say there was nothing to look at, but the area, the very last frontier of the wild, wild west, has always fascinated me. 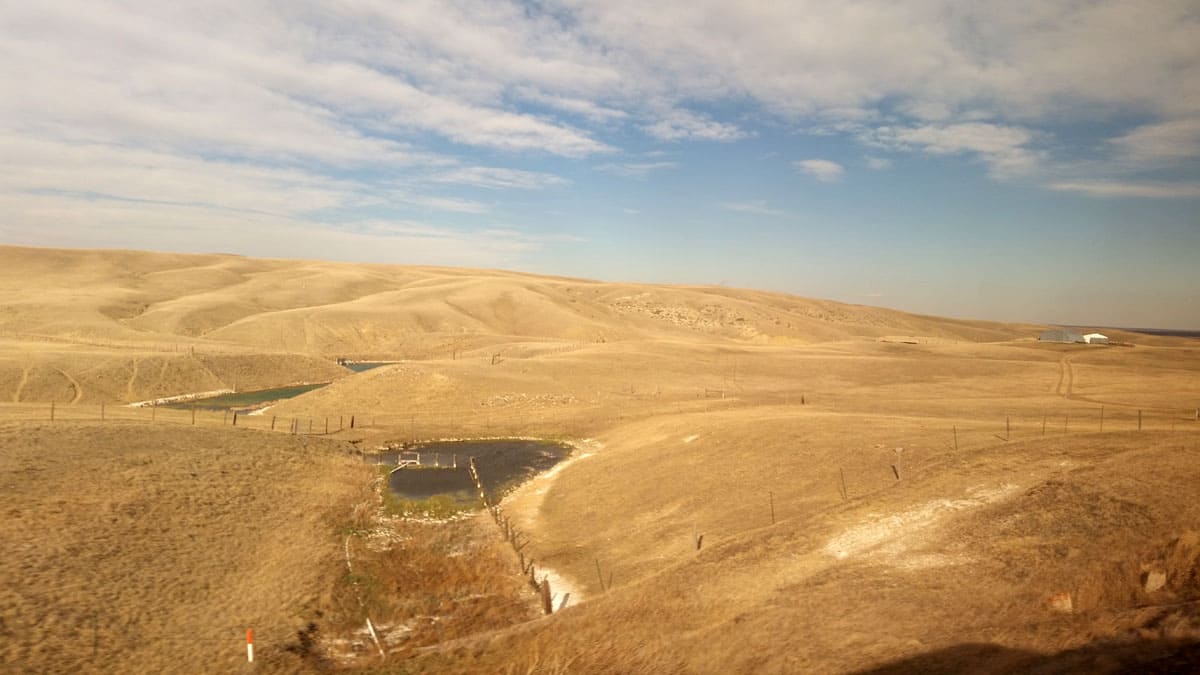 At 12:03, the announcement that the first serving of lunch was open came through the intercom system. It became apparent that being the last car could be a disadvantage as I wobbled through the eight or ten cars to get to the dining car. It did give me a chance to see who else was on the train though, as I made my way past children playing quietly in their seats, a group of young men enjoying drinks in the lounge car since they didn’t have to drive, and a Liquorice Allsorts selection of passengers scattered throughout.

I charged into the dining car only to be ushered back to the door—for my own safety of course—since the waiters were carrying hot food up and down the aisle. There are no “lone” seats for solitary travelers, so the waiter had me join another single traveler, a senior headed to Washington to visit her daughter, and a retired couple, both of whom had been teachers, also destined for Washington.

The conversation was great, as was the food I selected, barbecued ribs. And the ribs came with a pleasant surprise, since I hadn’t realized that meals were included in the cost of an Amtrak Roomette. Bonus! 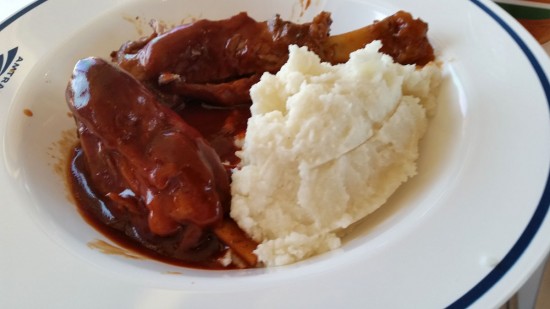 I’d already traveled much of Montana, but had never been in Malta, our 1:45 stop. The small town figures prominently in one of the historical westerns I’ve written, Badlands and Outlaws (The Old West Book 1)

,
since it was where Butch Cassidy and the Sundance Kid did their last bank hold-up, back in 1901. While planning the heist, the gang of outlaws had hung out on my side of the border, in the Big Muddy area near what’s now Coronach, Saskatchewan.

While most people don’t know it, southwest Saskatchewan had a place in wild west history as Station #1 on the Outlaw Trail that ran from just over the Canadian border all the way to Mexico. I’d heard such interesting tales of the area while I was researching the guide, Southern Saskatchewan (Backroad Mapbooks)

, that I’d written a nonfiction book, a western young adult novel and its sequel, based on the stories.

Modern day Malta, however, had long since forgotten the days of outlaws shooting up its streets, and stood as still and peaceful as the two dinosaur statues in front of its Great Plains Dinosaur Museum. 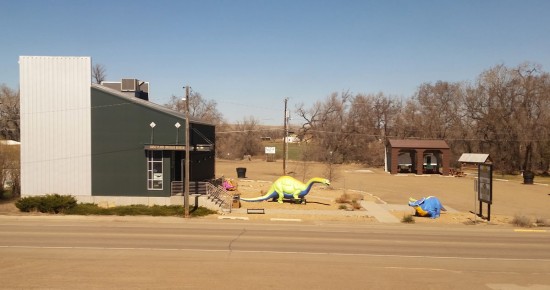 Havre, our 10-minute fuel stop at 3 p.m. is one of the larger towns in this part of Montana, and more important, was our first chance to get off the train and walk in the sunshine—all 70 degrees of it. For other travelers, I realized even more importantly that it was one of few smoke breaks on our rail trip.

Before the railroad arrived in Havre between 1887 and 1888, the settlement was known as Bull Hook Bottoms. Legend has it that around that time, two French Canadian squatters got into a scrap over the attentions of a pretty young woman. The largest and tallest, Joe De Mars, easily took out his much smaller opponent, French Gus Descelles. Gus walked away with the parting words, “You can have ‘er,” inspiring the town name pronounced accordingly, Havre. 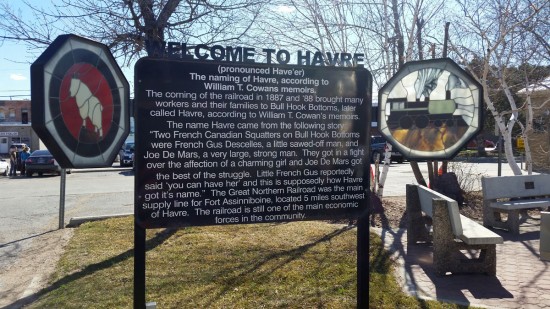 What I wondered was where the name Bull Hook Bottoms had come from?

The afternoon passed quickly in a series of golden snapshots of gently rolling barbed wire fenced pastures and stubble fields. Before I’d completed the article I was writing, it was 5 p.m. and we were at Shelby, MT, the next stop for passengers to disembark or get on.

It was, warned the conductor, the last chance for smokers to enjoy a cigarette until Whitefish, MT, when we’d be over the Rocky Mountains.

Cutbank, at 5:50 p.m., was next—a short stop that was home to an inland grain terminal with several tall round cement storage units. Rolling out of town, we passed under a bridge, coming to a valley and creek that appeared seemingly out of nowhere. A handful of people stood on the sharp bank below us, fishing rods dipped into the water. Small water filled squares made me wonder if it was a fish hatchery. 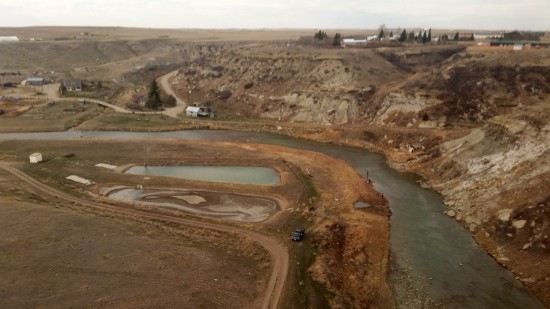 Meanwhile, dinner was being served, cruise-ship style, in the dining car. An attendant had come around earlier taking reservations starting from 5:30. I’d selected a time near the end, for 7:15, in the hopes that we’d reach the Rocky Mountains with enough daylight to see them and take some photos.

Browning, Montana, sounded like any one of a number of the small towns we were passing through, as a female voice on the speaker system warned that only people leaving the train were to get off—until we reached its outskirts, that is.

What I saw seemed the stuff of alien nightmares or perhaps, in a more earthy scenario, a glimpse into the apocalypse. A giant metal structure, shaped like a pepper shaker, stood adjacent to what I soon realized were piles of assorted types of junk: rubber tires, metal crates, ancient trailers, random chunks of rusting metal, broken bits of cement, just to name a few. 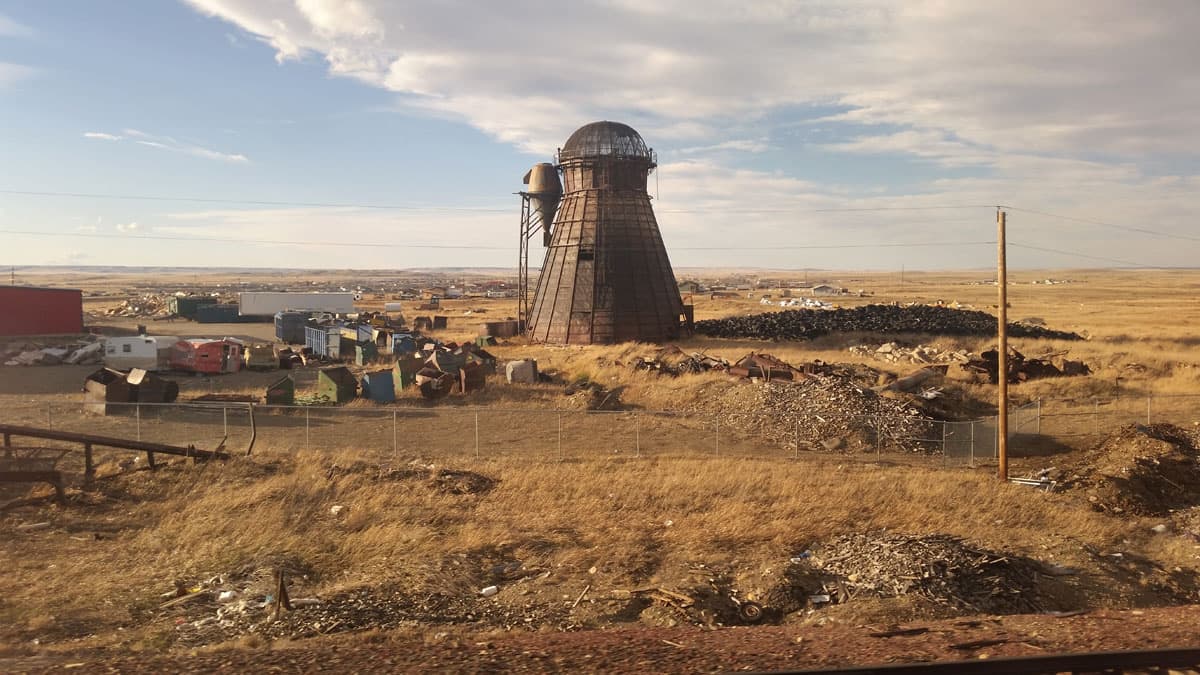 I’d no sooner uploaded my photos to social media and begun to take notes, than I noticed bits of unmelted snow alongside the tracks. And then, the thing I’d been waiting for, I the first views of the Rocky Mountains.

At 6:40 p.m. we passed the entrance sign Glacier Park. The train slowed perceptibly as we climbed, and the trees changed from brown and barren, to evergreens. 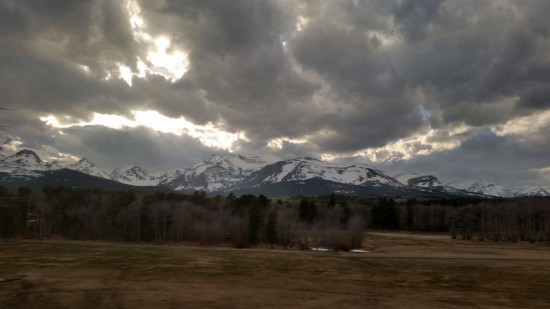 Dinner, when I had it in the last seating at 7:15, was to a view of mountains and creeks and even the Izaak Walton Inn, at Essex, MT, oldest in the area. Chicken and cheesecake made for the perfect end of a day. So, when I returned to my roomette to find Martinez, my sleeping car attendant, had already done the turn-down service and made up my bunk, I crawled in and closed my eyes. 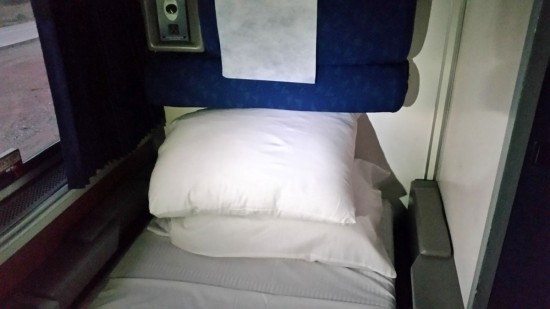 Finish the journey with me!

Day 3: Taking the Scenic Route with the Coast Starlight Train Down the California Coast