My train adventure continued on Sunday, April 3, 2016, with Day 2 of my three day journey from Williston, ND, to Oxnard, CA.

Sunday morning, I woke up to miles and miles of wind turbines strung out along the hilltops like a row of paper dolls all cut from a single sheet of white paper. I’d slept soundly enough to miss the splitting of the Empire Builder into two parts the night before in Spokane: the dining car and cars behind it off to Seattle, and the Lounge car with small cafe, two coach cars, and my sleeper, heading on to Portland. 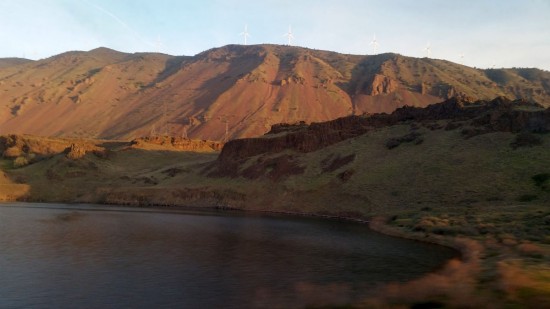 Without the dining car, breakfast, shortly after 7 a.m. was a boxed lunch. It consisted of ham and cheese croissant, canned fruit, yogurt and a dessert with tea. It provided a great start to another day of watching the landscapes roll by.

My cell couldn’t find any service, so it was half an hour until we hit another station and I could locate myself geographically. I was in Wishram, Washington. Just outside of Wishram, though, I’d seen my first vineyard, so already knew we were in wine country. A little more research and I learned that Lewis & Clark had camped here in both 1805, and 1806, on their return trip. They’d noted the rapids and Celilo Falls, the first of The Narrows or The Dalles, a series of rapids and falls that stretched for about 12 miles (19 km) downstream on the Colombia River.

Before long, the hills grew and became rockier. The train tracks rolled through a number of small tunnels, so we flickered between bright morning sunshine and total darkness. 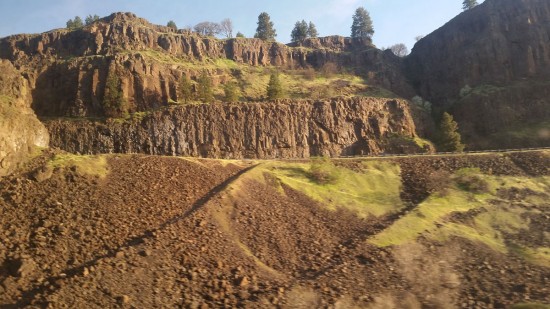 The foliage had gradually become greener and greener, first the grass, then the tree leaves, and then, the first dots of yellow wildflowers popped up between rocks that had rolled down the mountain side.

Bingen, WA, our 9 a.m. stop, huddled in the shadow of the mountain above it, with an assortment of services—including the first snowmobile/ATV dealership I’d seen along the way. Along the flat mountain top above and beyond it rolled a mile or more of houses, situated above the canyon below as if they had lakefront property. I couldn’t imagine living on a precipice! 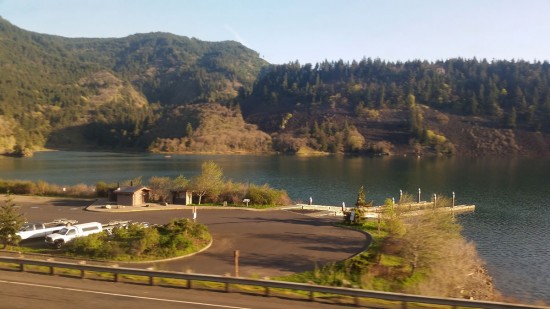 By 10 a.m. we’d traded mountains for skyscrapers, and could see Vancouver, Washington (not Canada!) ahead. A sign on the freeway below read, South to Portland on Hwy 5. That was where I was scheduled to change trains. Our arrival in Portland came quickly, along with the reminder that it was the turnaround point for the train and we’d all be leaving.

Grand Central Station in Portland retains the character of the railroad era, with high ceilings and granite floors and elegant surroundings. Built in the late 1800s, it was added to the National Historic Register.

I had about four hours until my connection left, and unlike flying, that meant I could actually do something since the train station was well situated in the older part of the city. A $4 fee to the Luggage Department at the Portland Grand Central Station checked my luggage for the day, and I was off exploring. 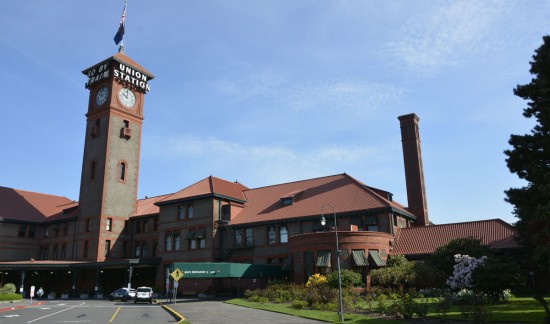 The time passed quickly as I took in the sights of Old Town, Chinatown,the Westside Riverwalk along Willamette River, the Historic Waterfront District and the Lan Su Chinese Gardens. It was a lot to explore—but that’s another story.

By the time I returned to the station my feet were sore and I truly appreciated the luxurious Metropolitan Lounge reserved for sleeper car ticket holders. I flopped down, helped myself to a cup of tea and connected to the free WiFi. Things were good! 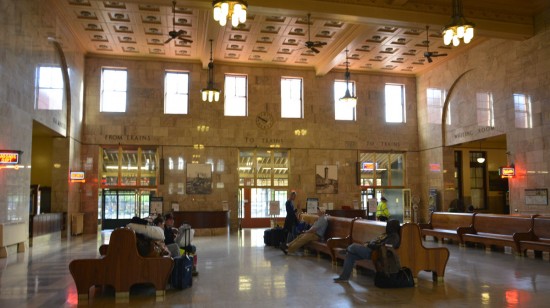 And they just kept getting better.

Not only did Amtrak Coast Starlight Train sleeper car passengers get preferred treatment, we also got early boarding. And, once on board, we were invited to have the free lunch the Dining Car had stayed open to provide. Suffice it to say that I’m totally hooked on travelling Amtrak!

I discovered quickly that there were a lot more sleeper cars headed down the California coast on the Coast Starlight than had made their way across the northern part of the U.S. Instead of one car, we now had six, and I was in the first one. That meant a long walk to get to the Parlour Car, my first stop.

The Parlour Car is a private car for the “sleepers”—each of the four Coast Starlight Trains has one. The Parlour Car on my particular train was built in the 1950s, during one of the golden eras of train travel. And it showed! From posh seats to solid woodwork, the interior was beautiful.

I’d scurried off to the Parlour Car right after the train departed from Portland to buy a $7.50 wine tasting experience—my other option had been a movie on a big screen tv on the lower level of the Parlour car. Wine, however, seemed a much more enticing option.

Alexis, our hostess, had been with Amtrak for a dozen years, and I soon discovered that she was passionate about providing train travelers with a fun experience. 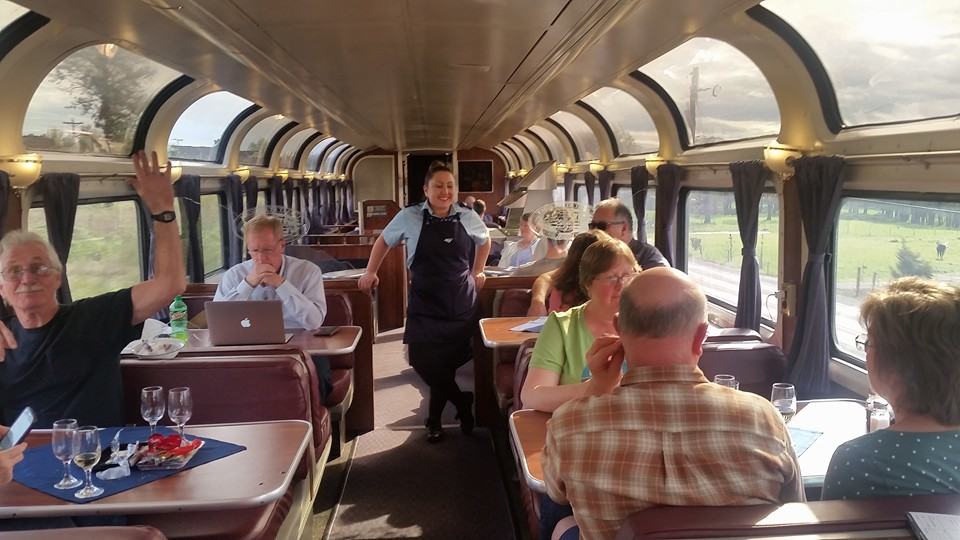 I, of course, having grown up on a horse ranch, had to know more. It seems that back in the 1850s, a rancher between the reserves of the Colombia, Yakima and Snake Rivers, woke up to find his herd of horses had wandered off and been tempted to climb an upland on the mountainside. When he found them munching down succulent bunch grass, he pronounced this area between the 46 and 47 latitude (the same as the Bordeaux and Burgundy regions in France) horse heaven.

How was the wine? Well, as a red wine I’d say it was nice, but experts say it has a rich, aromatic profile with a complex fruit flavour followed by a smooth, velvety finish. So much for my assessment.

Of the two reds, while I preferred the story of the first, I found the taste of the second, the Trapiche Oak Cask Malbec, a little sweeter and more to my taste. Founded in 1883 in Argentina, the winery is located in the foothills of the Andes. I could see why their distribution includes 80 countries with the wine’s sweet aroma of blackberries and plum, with a touch of smoke and vanilla (okay, I borrowed the description) and smooth long aftertaste (I got that part!).

And finally, my favourite, which was no surprise as I always prefer white wines that are sweeter. It was Pacific Rim Riesling Colombia Valley Washington, an area which has, I’m told, the ideal climate for growing world class riesling. The official description is that the taste is bright and crisp with a subtle sweetness—okay, I get this one, and couldn’t have said it better myself. 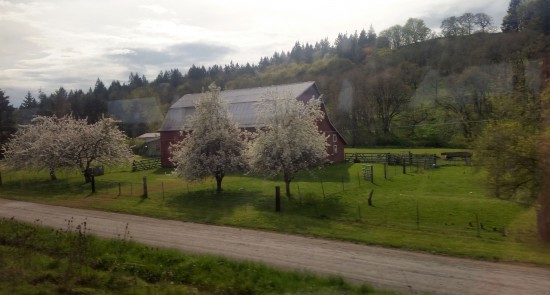 Outside the train window, the vineyards rolled by, along with pastures and small herds of animals.

Dinner, when it came at my preferred 7:15 sitting, was salisbury steak with baked potato, and chocolate mousse for dessert. My companions for the evening were a young couple from Vancouver, the first Canadians I’d met on the train, on their way to a basketball game in Los Angeles and a Viet Nam vet who’d recently retired from a civilian airline. We found lots to talk about! 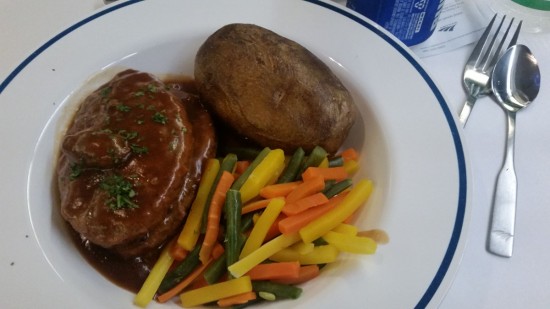 No matter how you look at, trains add a whole new dimension to the travel experience.

Miss Day 1 of the train trip from Williston, ND, to Oxnard, CA? Read it here: http://guide2travel.ca/2016/04/riding-amtrak-empire-builder-train-williston-nd-portland/

And if you’d like to finish the trip with me, here’s Day 3: Taking the Scenic Route with the Coast Starlight Train Down the California Coast