Historic Olallieberry Inn in Cambria, CA is Named for a Berry–Where Did it Come From?

Berries are a popular farm crop in California. In fact, producers are growing 32 thousand acres of strawberries in 2016! But there’s another berry that finds its way into California desserts–the ollalieberry. After making sure that “ollalieberry” wasn’t just a nickname for some other popular berry I enjoy eating, I had to investigate.

The ollalieberry is a popular bramble berry said to dominate the late berry market. However, it’s not a berry that’s found in nature, but was created by the USDA-ARS and the Oregon State University in 1935. Do you know what two berries were crossed to create it? (Click on the tabs above for the answer!)

The ollalieberry is a hybrid berry created by crossing a loganberry (blackberry and raspberry hybrid) and another hybrid, the youngberry. And if you’re not sure what a youngberry is (I wasn’t either), it’s a cross of a raspberry, blackberry, and dewberry. The youngberry was created by Byrnes M. Young, a Louisiana business man, in 1905.

While the youngberry is popular in Australia, South Africa, and New Zealand, it never caught on in North America. The ollalieberry, however, became a good commercial crop after its public release in 1950.

Ollalieberries have an interesting life span, as their roots and crowns are perennial, so they come up every year. However, the stems/canes that grow from the roots are biennial and only live for two years. The first year the stem grows side branches, which bear fruit in the second year.

You can pick your own ollalieberries in California by visiting a U-Pick berry farm. Check what’s in season, and where to find a farm close to your July holiday route at: http://www.pickyourown.org/CA.htm 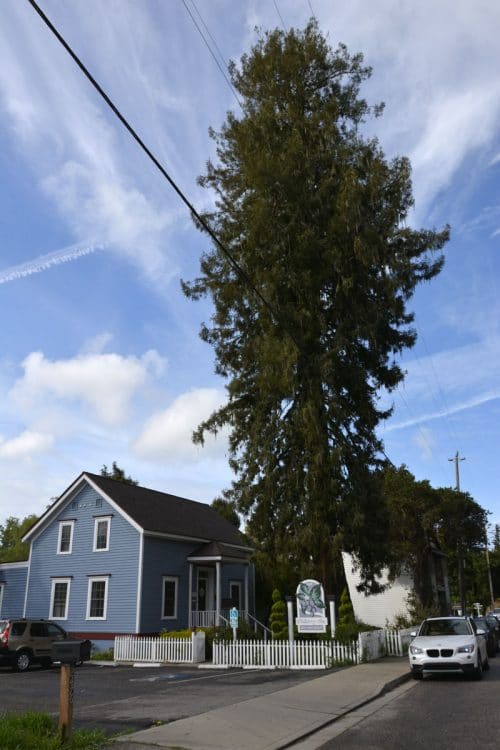 The Ollalieberry Inn Bed & Breakfast property is dominated by a beautiful Coast Redwood Sequoia tree that’s about three times as high as the two-story house.

Now 140+ years old, the Inn was built by two brothers, Otto and Carl Manderscheid, who had left Prussia to open their own pharmacy in Cambria, California. The house was built from Cambria Pine — and the Sequoia was planted beside it.

While I didn’t get to stay at the Inn on my visit, I was able to get into one of their cooking classes. In fact, I discovered the berry and its amazing winey taste in their bars and pie. 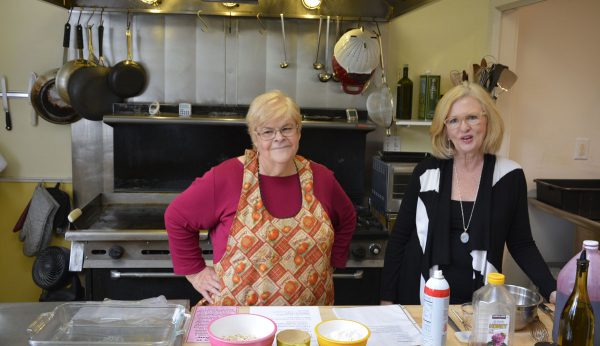 I did get to peek into one of the bedrooms, though, and was impressed with the historic details–right to the quilts on the beds. The bedrooms each have private bathrooms (six ensuite and three detached), along with fireplaces. It didn’t take a lot of imagination to see myself curled up in front of the fire, glass of wine in hand, reading …