Walking on Gold–A Visit to Hearst Castle in California 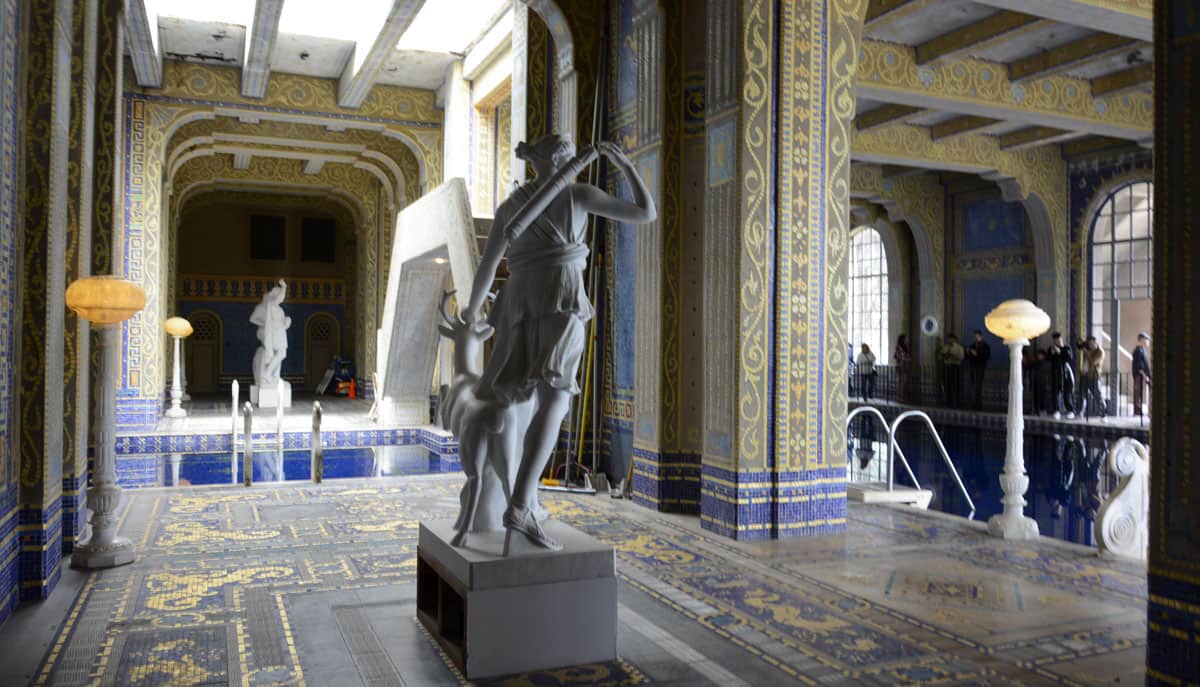 The ancient Romans had huge baths that resembled swimming pools, where they not only washed the day’s grime away, but also socialized with friends and neighbors. While regular folk went to a public bath, the rich had a room dedicated to bathing. Many were built over natural hotsprings to take advantage of the mineral water and provide the ultimate in a lavish experience.

It’s likely that none, however, had real gold in the floors like the 1″ infused gold square glass tiles around the Roman Pool at Hearst Castle!

The pool is so large it holds 205,000 gallons of water and varies from 4′ to 10′ deep. Eight marble statues decorate the area, and there are 17 dressing rooms each with a shower stall, sweat baths, and an exercise room–all finished in 1934, long before our modern spa facilities became popular.

George Hearst purchased the land at San Simeon Bay in California in 1865, selling village lots along with developing the wharf and building warehouses on the Bay. By the 1880s, Old San Simeon Village not only had a telegraph connection to the world with its line to San Luis Obispo, but had everything from a blacksmith and livery stable to schools and two hotels. 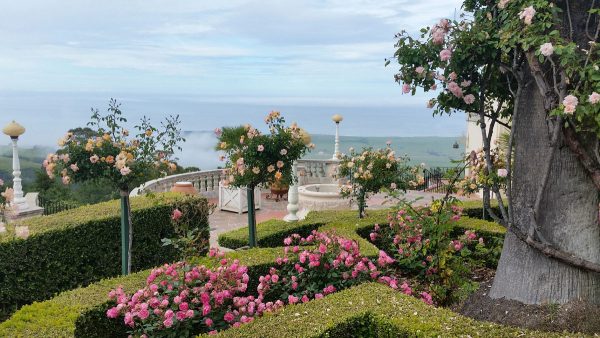 William Randolph Hearst inherited the property in 1919, just after the end of WWI. He immediately began construction on his castle at the top of a high hill (known as Hill Camp) where he’d camped as a child, calling it The Enchanted Hill or La Cuesta Encantada. The view from the top–I can guarantee–is spectacular, as you can see 35+ miles in the distance.

Hearst let his imagination run wild as he built what has been ranked as the fifth most luxurious personal residence in the world. Working with his architect, Julia Morgan, the castle grew to 165 rooms and 127 acres of gardens, terraces, pools and walkways. 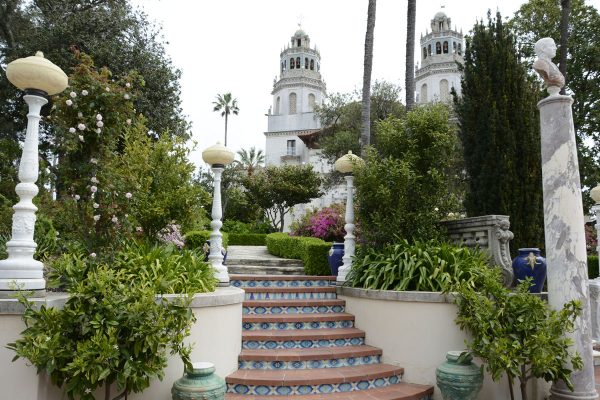 Hurst died in 1951, leaving some parts of the castle unfinished (such as the service wing). In December, 1957, the hilltop was donated to the People of the State of California. Today, the castle is operated by California State Parks and is self-supporting.

The historic importance of Hearst Castle has been recognized statewide and nationally. It joined the National Register of Historic Places on June 22, 1972, and became a United States National Historic Landmark on May 11, 1976.

Highlights of a Tour of Hearst Castle

If you’ve ever visited palaces in Europe, you’ll have an idea of what it’s like at Hearst Castle. The tour begins at the visitor center in the town of San Simeon on California’s scenic Highway #1. After buying your ticket (there are four options), you board a bus that winds up the hillside, around trees up to 300+ years old, since the road was built around them.

My tour guide was Chris, a member of the Park Service. The tour started outside near the Neptune Pool, working our way through gardens and statues, learning about Hearst and life as it was in the castle in the the 1920s and 1930s. I could imagine the era and famous people who had been guests here–from Winston Churchill and Howard Hughes, to Gary Cooper and Greta Garbo. 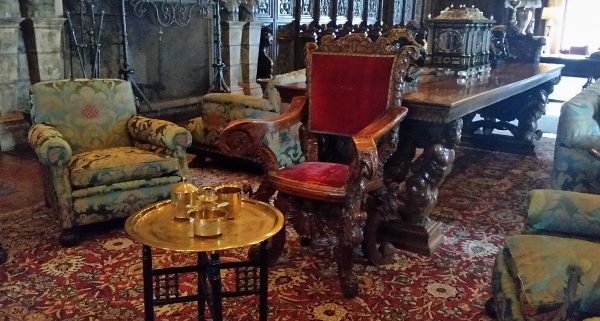 The art and statues were amazing, some up to thousands of years old. As the tour progressed through the house, I realized the extent of Hearst’s collection was almost unimaginable. The ceiling finish in the Billiard Room, for example, was 500+ years old. Silk hangings, 300+ years old, hung on the theater room wall, and Greek and Roman stylized figures held lights that looked like torches. 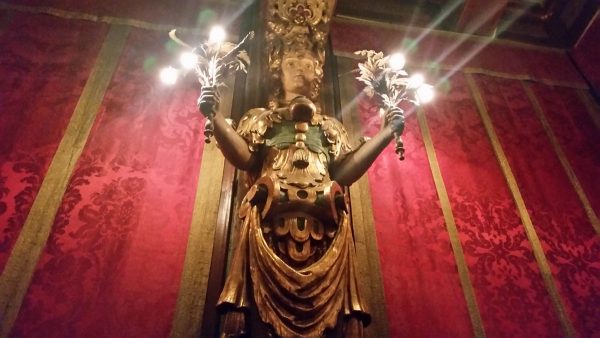 Some of my favorite stories, however, were of the zoo that Hearst built. Back when all those famous folk were hanging out at La Cuesta Encantada, the road up the hill had twisted through a zoo of hundreds of animals, many of them rare or exotic.

He had, for example, a herd of white fallow deer from Europe, kangaroos from Australia, giraffes from Africa, and even polar bears from the Arctic. On hot summer days the bears were even treated to ice to keep them comfortable.

When the Depression hit, and Hearst’s finances started to suffer, he sold many of the zoo animals along with a number of coveted historic artifacts like Thomas Jefferson’s bible. The zebras in his zoo, though, were let loose on the ranch that had become their home. I even saw some of them grazing in a field after leaving the ranch!

If you’ve ever wondered what it would be like to be a billionaire, visiting the Hearst Castle is your chance to find out!

My visit to Hearst Castle was hosted by San Luis Obispo County as part of a post-trip after the North American Travel Journalists Association (NATJA) 2016 conference in Oxnard, California.