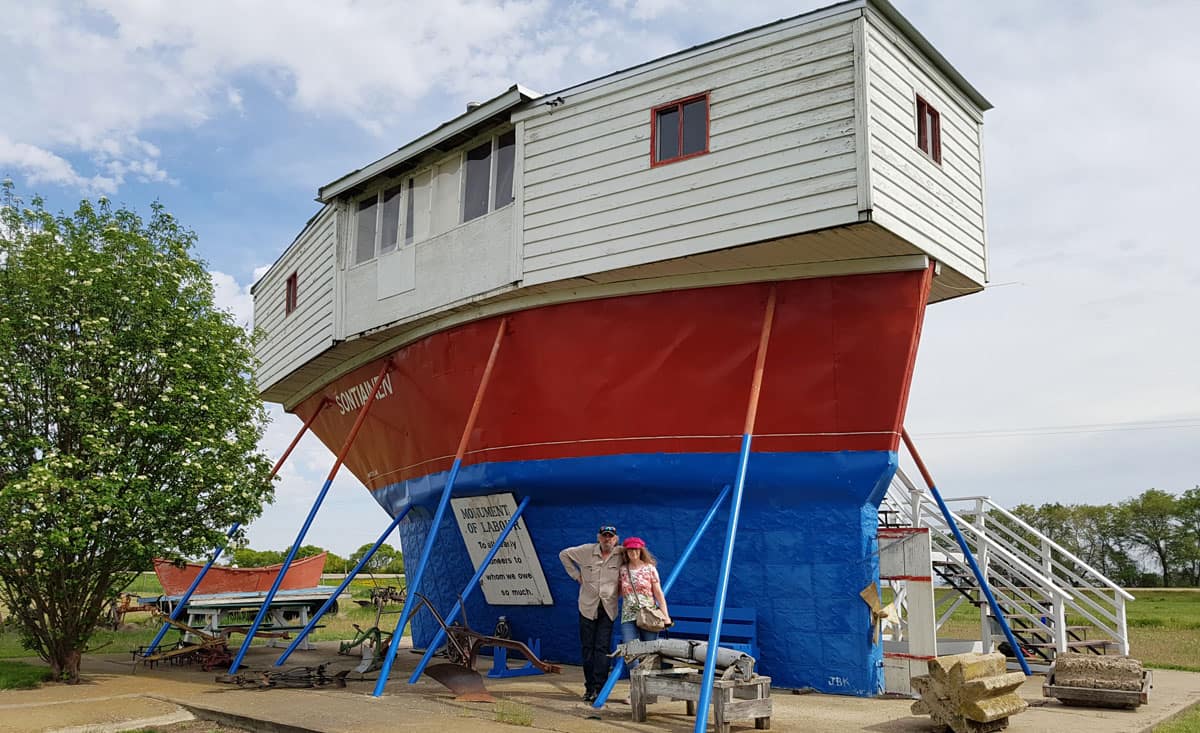 Abandoning a wife and children to walk a thousand kilometers (600 miles) from Minnesota to Saskatchewan seemed an odd decision to most, but not nearly as crazy as building a ship to sail from land-locked Saskatchewan to Finland. But Tom Sukanen did both early in the 20th century.

Sukanen had left Finland around 1898, arriving in North America along with thousands of other Finns, just prior to the Russification policies that started in 1899. But he left his heart, as they say, in the Old Country, where he hoped to return in triumph some day. 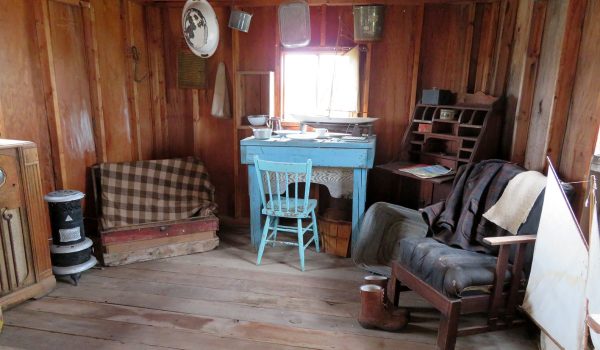 Cabin inside the Sukanen ship where Tom lived as he spent more and more of his money on the ship.

His accomplishments in the Macrorie-Birsay area in Saskatchewan were many, but his heartbreaks many more. A number of historic accounts agree that before beginning to build his ship, the Dontianen, which was 43 feet long, 13 feet at its widest, and 10 feet from keel to deck, he made a sturdy, smaller boat. Paddling it through the high spring waters of the South Saskatchewan River, he followed various water bodies right to Hudson Bay, where he got work on a freighter home to Finland. The stories never say how he returned, however, just that he started building the Dontianen afterwards.

Personally, I’m a little skeptical of the story, and wonder if the first trip wasn’t just a dream that fueled his overwhelming obsession with building the larger steamboat. At any rate, Sukanen’s ship never did sail its owner home to Finland, and he eventually died in North Battleford in an institution. 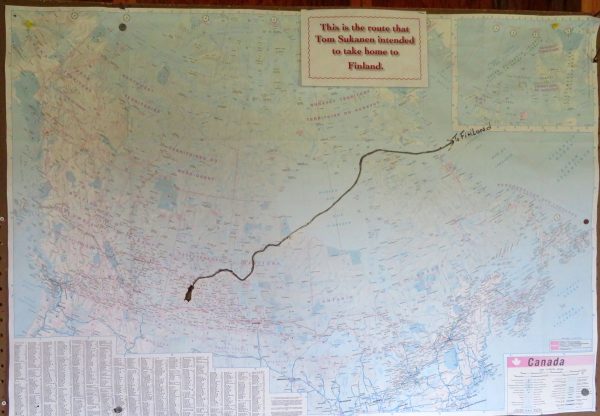 Sukanen’s proposed route to sail to Finland from landlocked Saskatchewan.

The determination of the dreamer, though, kept his story alive for decades, and the ship–and eventually Sukanen’s body–were moved to the Pioneer Village and Museum south of Moose Jaw.

More Saskatchewan Dreamers and their Secrets 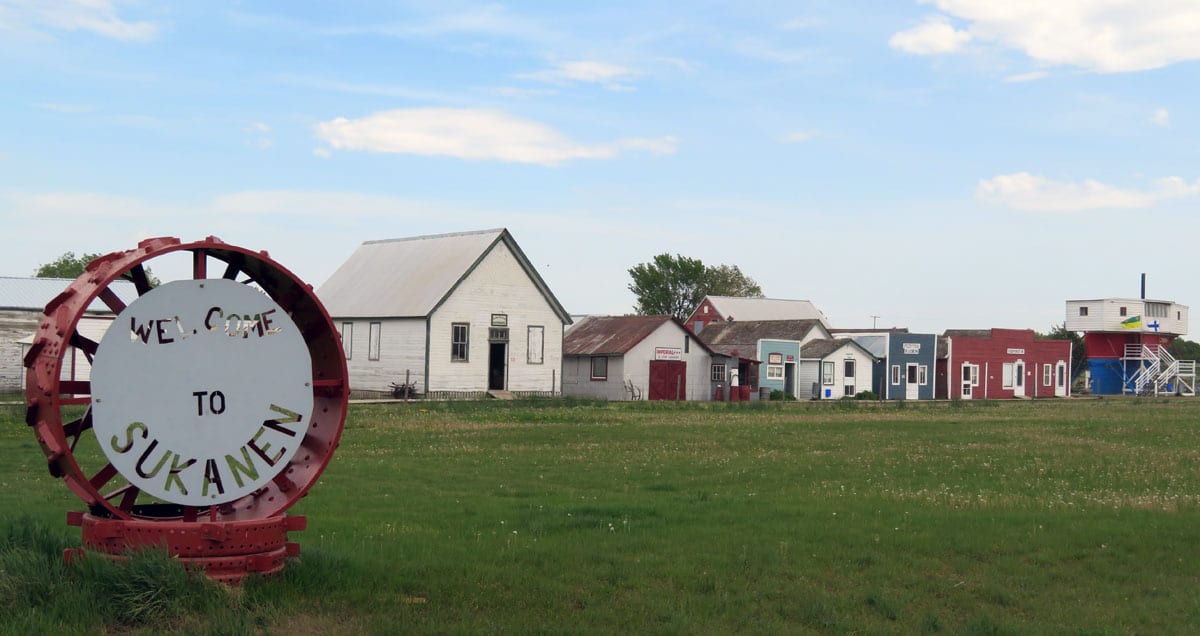 The Sukanen Ship Pioneer Village and Museum is one of Saskatchewan’s best kept secrets — with nearly 50 buildings and structures ranging from a grain elevator to a threshing crew cook car, you’d think it would be impossible to miss, but miss it we did for decades while driving #2 highway south of Moose Jaw. It wasn’t until this May Long (as we call the Victoria Day weekend here in Saskatchewan), when friends invited us to join them for a camping weekend (one of the favorite activities here for the May Long), that we set off to see what we anticipated would be a ship made by a crazy guy and a few old buildings. (Check out the museum map to see for yourself)

We were so wrong.

A sign on the door, as you pay your $8 ($7 for seniors like us and $5 for the kids) says to allow a couple of hours for your visit. We spent five and rushed through the second half, missing a few things we still need to go back to see.

You can start your tour in a number of different spots with this open air museum. We chose the cars, moving next to explore Saskatchewan’s farming history in the storage buildings.

Tractors were key to developing Saskatchewan’s early reputation as the “Canada’s bread basket,” and I was familiar with lots of the model names in the Allis-Chalmers and Case tractors. 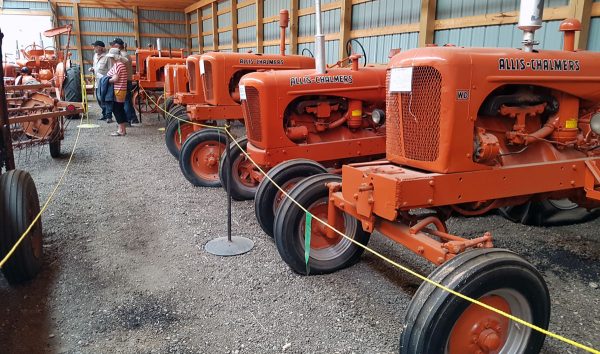 What I didn’t know was that Bill Young, owner of the local Moose Jaw dealership, Young’s Equipment, had donated the enormous collection of tractors, farm implements, and a steel building to store them in, to the museum. We were lucky enough to have Bill, an amazing entrepreneur, join us for a tour, and hear some of his stories.

From the 1930s red tractor he’d driven near Mortlach as a boy, that cost the price of six steers and three horses ($1008 value) to buy back then, to the tiny, 1938 combine that could harvest just 11 acres a day, the building provided a treasure trove of forgotten Saskatchewan history. 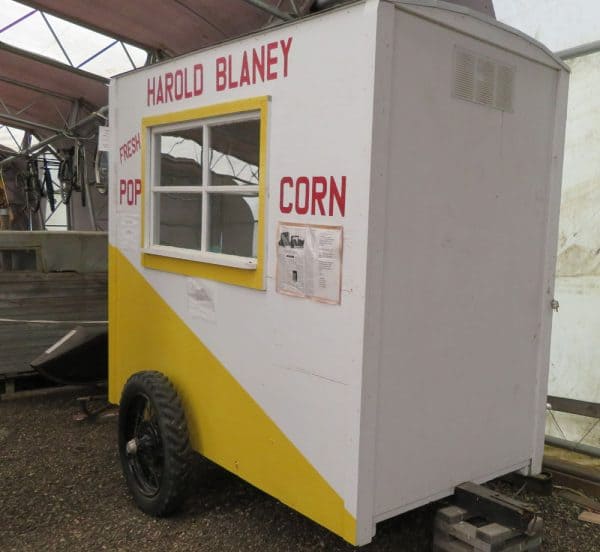 Moving to another building, I discovered the popcorn man, Harold Blaney. Parking his truck and trailer in downtown Milestone on Saturday nights for 21 years, plus important summer events like fairs and sports days, Harold had provided big, buttery bags of popcorn for shoppers and the Saturday night movie goers.

While I never met Harold in Milestone, I could remember going with my grandparents to town on Saturday night in Wawota, so it was easy to add the smell of that popcorn truck to my memory of the hustle and bustle of neighbors getting out to socialize and shop.

And then I came to the B – A truck and display, a real blast from the past. B – A, of course is British American Oil, and every small town in Saskatchewan likely had one of their independently owned gas stations and repair shops. I sure remember them! 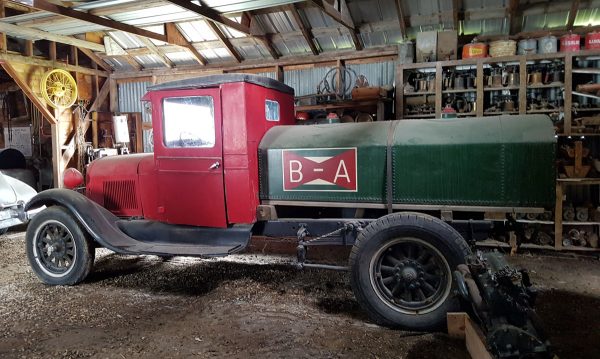 Of course an open air museum is best known for its many original, often relocated structures, so we were soon off exploring them.

The Geo Petter home, moved from Baildon, Saskatchewan, to the museum, is described as the 100,000 house in Saskatchewan to have power installed. The Saskatchewan Power Commission was formed in 1929 to connect the people of Saskatchewan through a power grid. Progress was slow until In 1949, when the Saskatchewan government passed the Rural Electrification Act, to purchase and join all of the existing small town power companies. 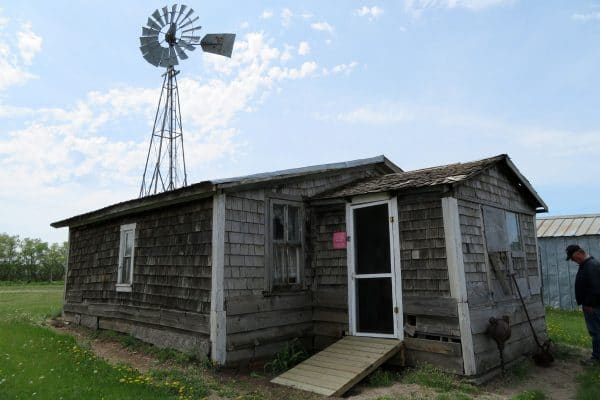 With more than 10,000 miles of rail lines in Saskatchewan at the peak of rail transport, trains were once the most popular way to get around Saskatchewan. So, it’s no surprise that the Baildon train station, along with a CPR caboose, was also moved to the museum. 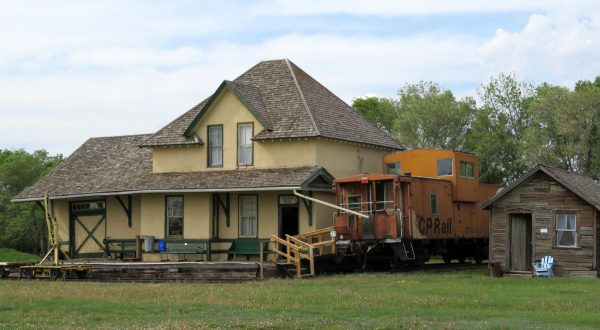 Of course, there are many artistic treasures in Saskatchewan too, and one of my favorite pieces at Sukanen also came from a Baildon citizen, Jerry Kaiser, a folk artist who hand crafted this small merry-go-round (below). Kaiser began his art career making furniture until he declared his house was full. Then, his hobby turned into Folk Art. He said, “I began making Rocking Creatures. My work now devolved into a Craft gone mad with depictions of right wing politicians starting with “Rocking Mulroney” in 1992.” 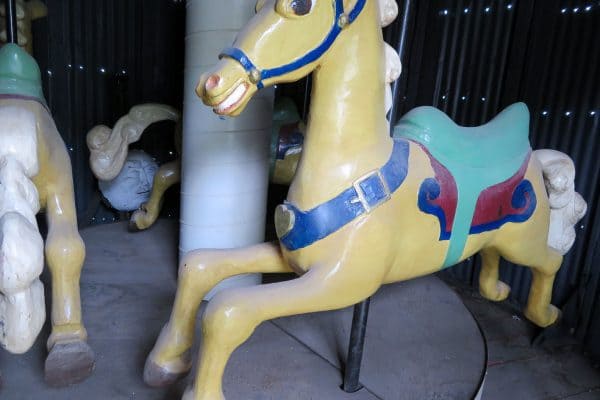 No matter what you want to know about life in Saskatchewan in the past century and a half, you’ll find it at the Sukanen Ship & Pioneer Village Museum. With thousands of small artifacts collected here along with the large displays, there’s everything from wedding dresses and kitchen ware, to blacksmith tools and country school books.

There are dozens of things to do in historic Moose Jaw, so plan a weekend this summer to explore it all.

On our visit, we camped in the city limits at the Prairie Oasis Tourist Complex (it also has a motel), which doesn’t have park fees since it’s independent. Rather than cooking, we enjoyed the great steak special at nearby Bugsys Irish Pub in Moose Jaw’s Town ‘n Country Mall. 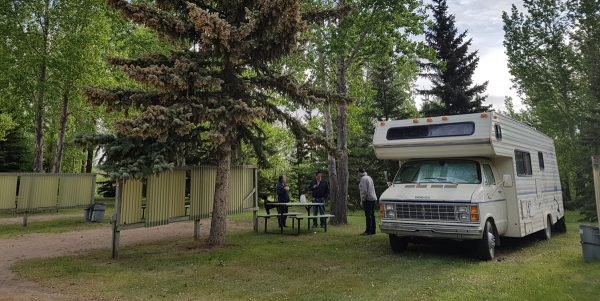