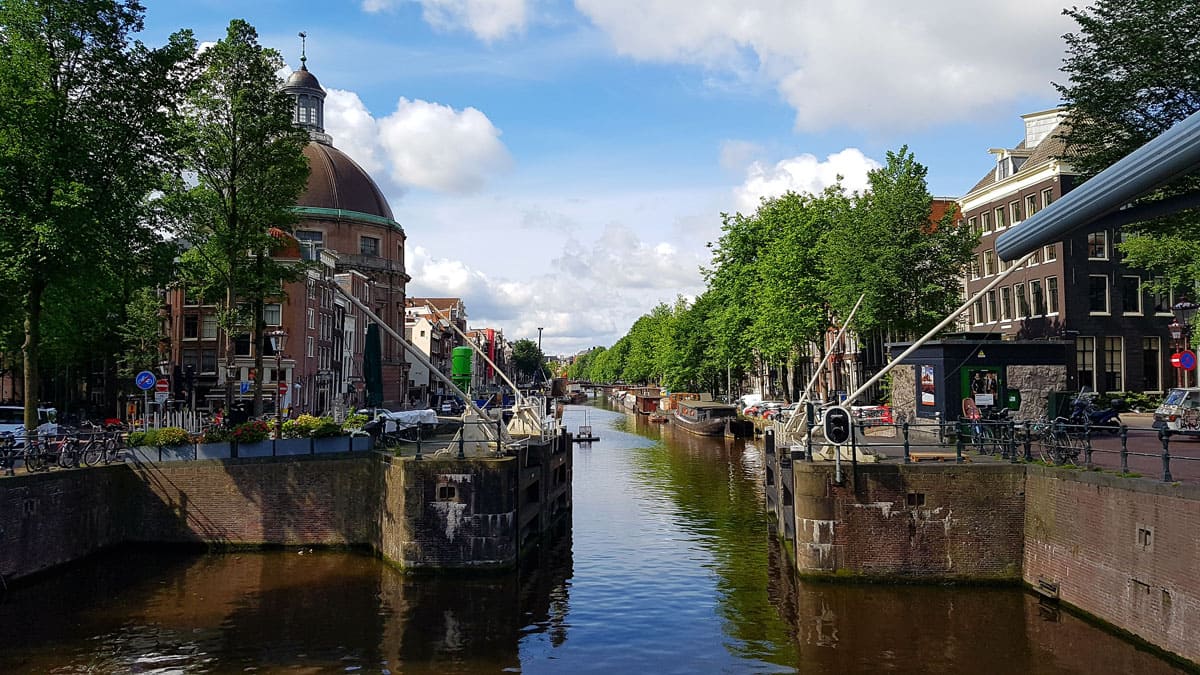 Amsterdam is a city of canals–in fact, this city in the Netherlands is sometimes called the “Venice of the North.” In 2010, three of these canals, which together form the Amsterdam canal belt, were added to the UNESCO list of World Heritage Sites.

These three canals, all dug during the 17th century, are the Herengracht, Prinsengracht, and Keizersgracht. While these were the beginning, there are many more canals in Amsterdam!

How many canals are there in the city of Amsterdam in the Netherlands?

Amsterdam has 165 canals, which if they were linked together in a straight line, would flow for 100 km or 60 miles. That’s a lot of waterways around a city of just under 1 million people! 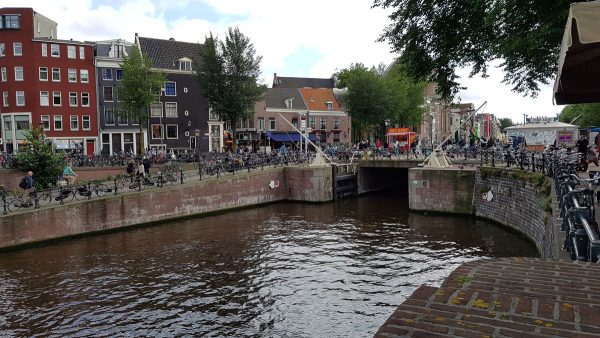 The name, Amsterdam, comes from the city’s start in about 1250 when a dam was built to hold back the Amstel River–it literally means “Dam in a watery area.”

From the late 1500s through the 1600s, Amsterdam’s Golden Age, the city was one of the world’s most important trade centers. People and goods from around the world arrived by water–in fact, half of the world’s mercantile ships flew the Dutch flag. As well as trade, the Dutch were also prominent in art and science.

As the population grew here during its Golden Age,  canals were built in concentric half circles (see the Google map above) outward from the dam for defense as well as water management.

Canals soon proved to be beneficial in even more ways, and a maze of canals was added to the main ones to move goods in and out of a city bursting at its seams. Today, they’re still important for moving things–mainly people–around the city. In addition to locals, three million visitors enjoy these canals every year. 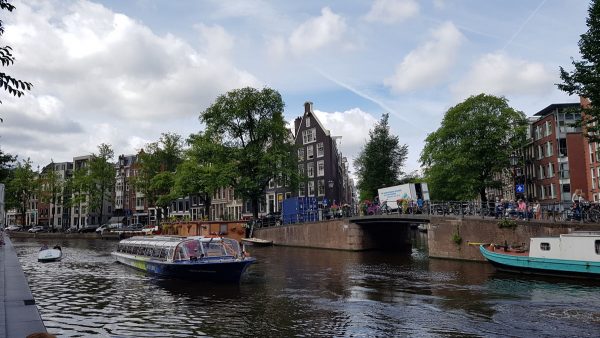 And I was certainly one of them.

On our visit, our hotel was situated directly in front of the canal on Damrak, a street name that means “the last section of the river, leading to the dam.” In 1922 this street was created by filling in the riverbed, and today it connects Amsterdam Centraal train station in the north and Dam Square in the south.

It was amazing to wake up in the morning to look out at the canal–and at night, we were part of the hum of thousands who come to enjoy Amsterdam each year. 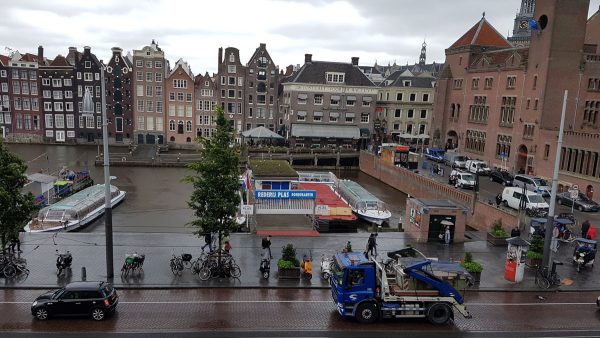 And if it looks like this long row of buildings seems crooked, it’s not due to my camera or vantage point from a second story window. Some of the slant no doubt comes from settling in the swampy land, and foundation damage after so many centuries, but a lot of what you see was deliberate.

Early warehouses and houses, ranging from four to six stories high, were built leaning forward in order to make it easy to move things in and out of upper stories. How? Well, at the peak of each roof you’ll find a large hook mounted into the building frame, which can be used as a lift! 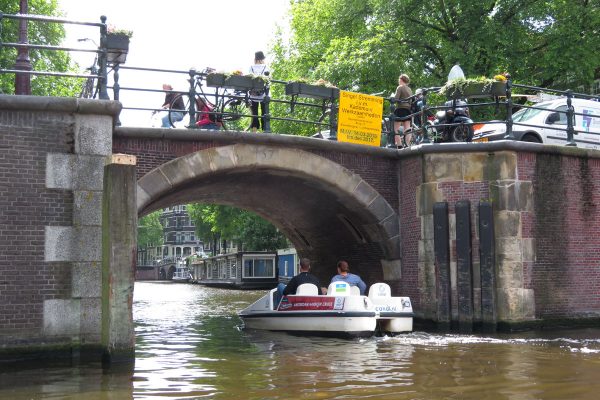 The canals are mainly used for transportation, and you’ll find the water appears very murky–much like the bayous in Louisiana. Swimming is against the law in the canals, as it would be extremely dangerous with all of the boat traffic.

There is, however, an annual Amsterdam River Swim, which takes place every summer. The city does extra sanitation prior to the event.

With so many waterways, there are also lots of bridges. In addition to 1753 main ones, most of which open to let boat traffic through, there are also 2250+ non-numbered bridges for vehicles and pedestrians. 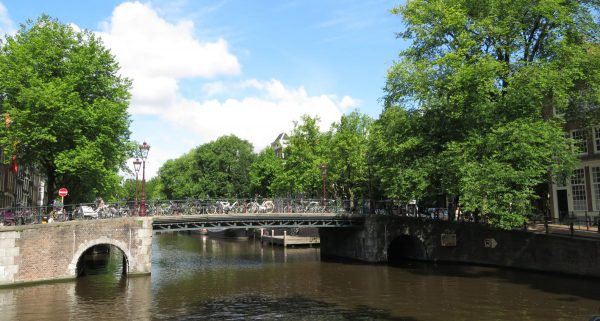 And as you might suspect, a lot of things that don’t belong in the canals end up sinking there accidentally. That includes about 500 small boats and sloops, 35 cars, and between 12,000 and 15,000 bicycles!

If you’ve ever dreamed of living on the water, you can give it a try in Amsterdam. Currently, there are about 3600 houseboats tied up along the canals–the majority are hooked up to city sewage systems for their wastewater (sinks, bathing, and yes, toilets), through a Clean Ship project started in 2007. Project completion is scheduled for 2017. 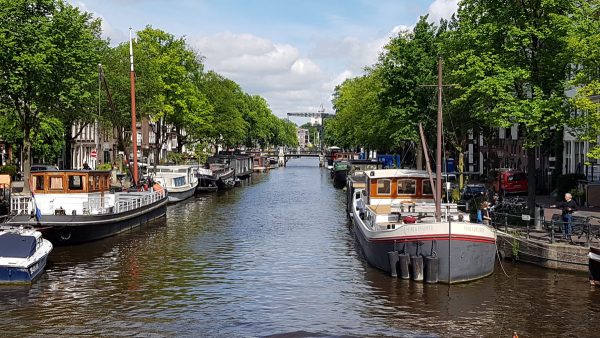