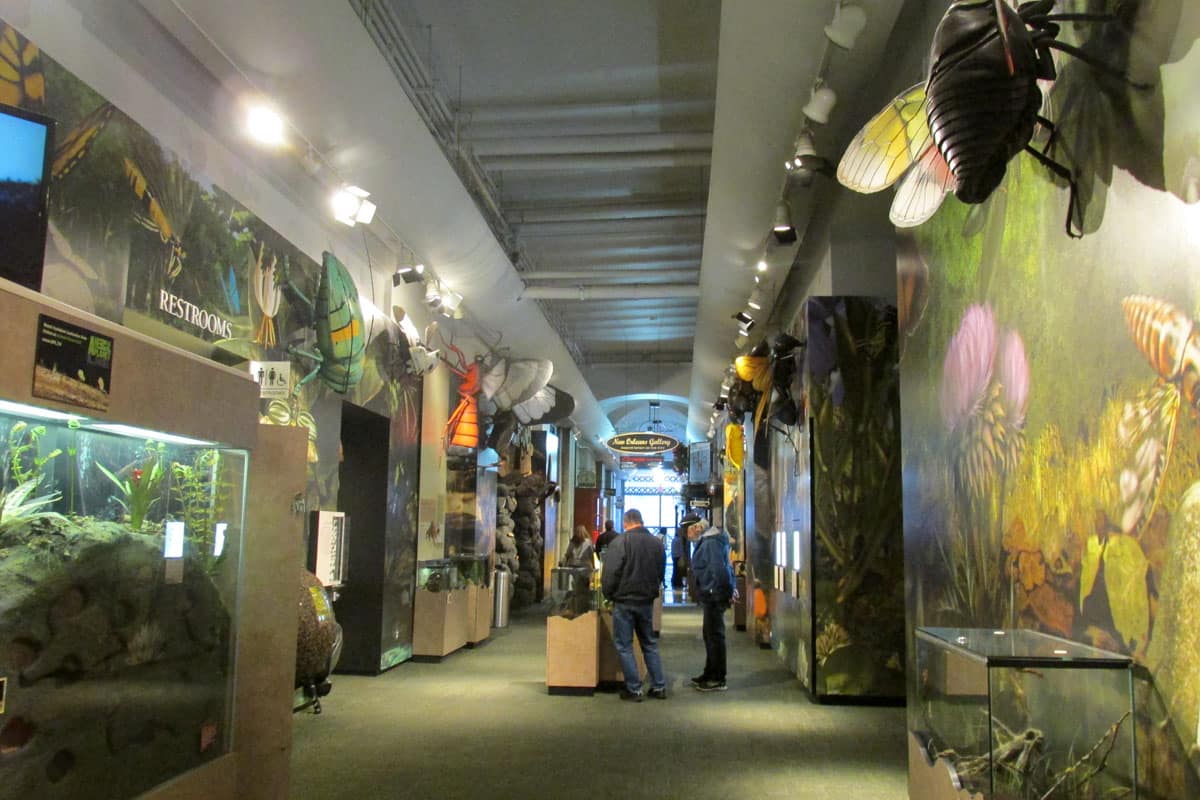 No matter where you go in the world you’ll find zoos and aquariums–you won’t, however, find many Insectariums. It may be that we’re a little afraid of insects and their habits. From hornets and tsetse flies, to driver ants and mosquitos, the bugs we encounter are often a cause for panic when we travel instead of curiosity.

Can you guess what insect is the deadliest?

The deadliest insect in the world is the mosquito, which kills 750,000 people every year!

But while we may love to hate ’em, it turns out insects are fascinating. So much so that there are around 20 amazing insectariums around the world where we can learn all about them. I visited the Audubon Insectarium in New Orleans, which is the largest free standing museum in the U.S. with this kind of collection.

And after visiting, the biggest thing I learned about bugs was that they’re just as fascinating for adults as they are for kids!

While the Audubon Insectarium is new, having opened in June, 2008, the building where it’s housed is anything but. Can you guess what building houses the Insectarium and when it was built? (Don’t know? Click on the tabs above to find out more.)

The Audubon Insectarium is housed in the U.S. Custom House in New Orleans. Enormous by any standards at 23,000 square feet, the building fills a whole block between by Canal, North Peters, Iberville, and Decatur Streets–putting it smack in the middle of all of the activity around Mardi Gras. In fact, I enjoyed a number of parades right in front of it during my week long Mardi Gras experience in 2016. 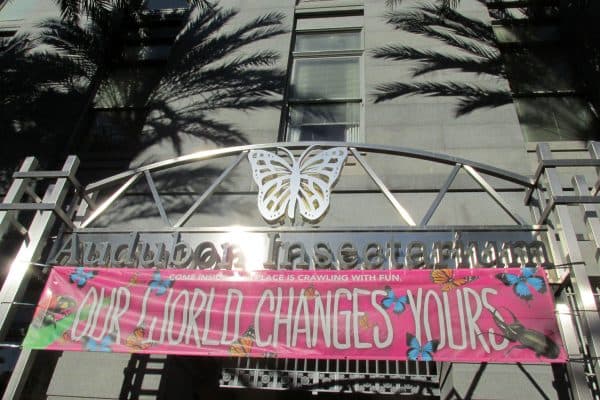 Its cornerstones were laid in 1849, but full completion took some time, in part due to the Civil War (1861 – 1865). When the Union Forces took control of New Orleans, they used what was built as their headquarters and confinement area for Confederate prisoners. In 1881, the building, with a number of design changes, was finished.

Now fully restored, the impressive white marble columned building is one of the oldest and most important Federal buildings in the South. I wasn’t sure which took me most by surprise when I entered, the halls with vaulted ceilings 21 feet high or the row of guards and security equipment I had to pass to get into the exhibits!

The exhibits were another thing altogether. I’m really not into bugs even though we certainly have enough of them on the Canadian prairies, but I’ve never been more fascinated by exhibits than I was here. Some of the displays, like the Louisiana Swamp, were particularly important in getting the low-down on what’s local, like the mudbugs as they’re popularly called–which are actually crawfish and not bugs, or fish, at all. Instead the crawfish are crustaceans like crabs and lobsters. 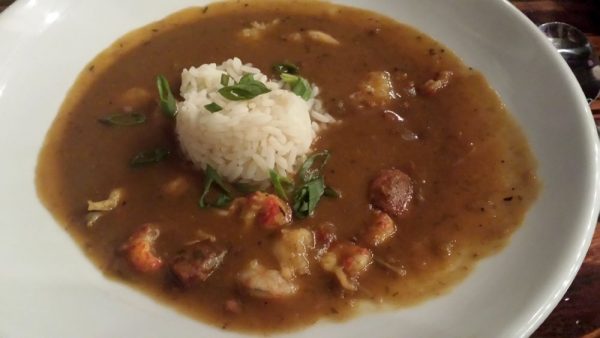 The first thing I have to eat when I get to Louisiana is some crawfish — the gumbo is amazing!

Speaking of food, you can even taste some insects at the Insectarium if you dare. The Cooking Show and Cultural Café let you taste all kinds of things you might want to learn the name of after you’re done instead of before! Since my visit was late in the day, the cooks were already off duty, so I can’t even share any insights on how things like dragonfly hors d’oeuvres and cricket chocolate chirp cookies taste.

I did have enough time to zip through the Termite Gallery, the Underground Gallery, and Award Nights Theater as well as the Hall of Fame, with the biggest, fastest, and most amazing insects.

Even if you’re trying to pack a lot into your visit to New Orleans, like I was, the Insectarium is an amazing experience for kids–and grownups–here’s information on visiting hours, location, and admissions: Audubon Insectarium. 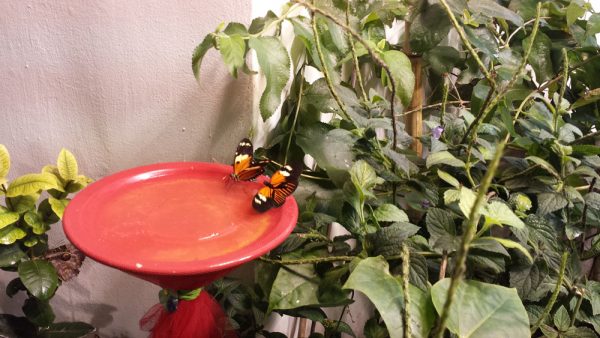 Butterflies in the Audubon Butterfly Garden.

The Audubon Insectarium is also home to the Audubon Butterfly Garden. Opening the door to the Butterflies in Flight exhibit was like stepping into a tropical wonderland. Thirty different butterfly types flitted around the 10 plant species, plus free-flying finches added their song to the scene in the Asian inspired gardens.

You check them out virtually with this short video.

The Audubon Nature Institute also has the Audubon Aquarium of the Americas and the Audubon Zoo in New Orleans.

Audubon Aquarium of the Americas 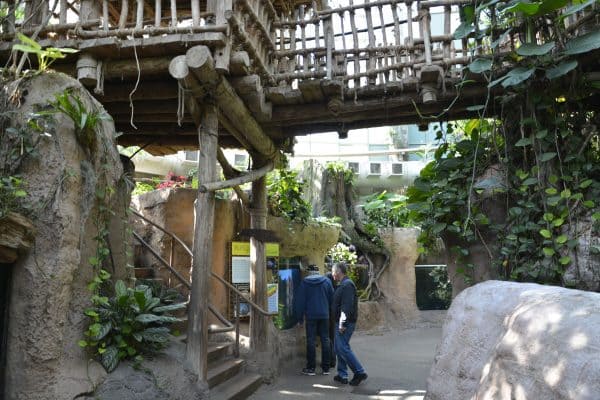 Amazon Rain Forest at the Audubon Aquarium of the Americas in New Orleans.

Since the Louisiana landscape is about as opposite the Saskatchewan prairies as you can get, I started our visit to New Orleans with the Aquarium, so the friends I was traveling with would get a crash course in Louisiana wetlands and the bayous, marshes, and swamps. And it was everything I hoped for, even including a rare white alligator that resided in the Mississippi River exhibit.

One of our favorites was the Gulf of Mexico 400,000 gallon tank that featured sharks–a fish David really wanted to look at up close–as well as stingrays and an endangered sea turtle.

With two floors of exhibits, it took us a couple of hours to see everything from the Great Maya Reef to the cute little penguins in their black and white tuxedos. I also had fun being a kid again sticking my head in the fishbowl and having my photo taken! 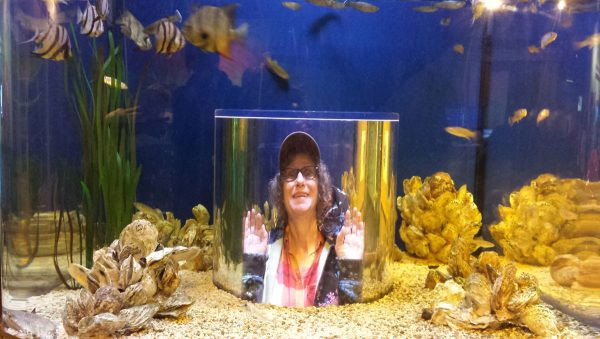 Linda Aksomitis with her head in a fishbowl.

Unfortunately, we didn’t have enough time to get to the zoo even though it would have been a great place to learn more about the Louisiana Swamp! The Jaguar Jungle also promised some adventure, but our time had run out.

You can learn more about the zoo here.

I’d like to thank the Audubon Nature Institute for providing me with free passes to all of these amazing places–I really appreciated taking a closer look at this great family attraction in New Orleans. The opinions I shared in this article were all my own and not influenced by the support from Audubon.