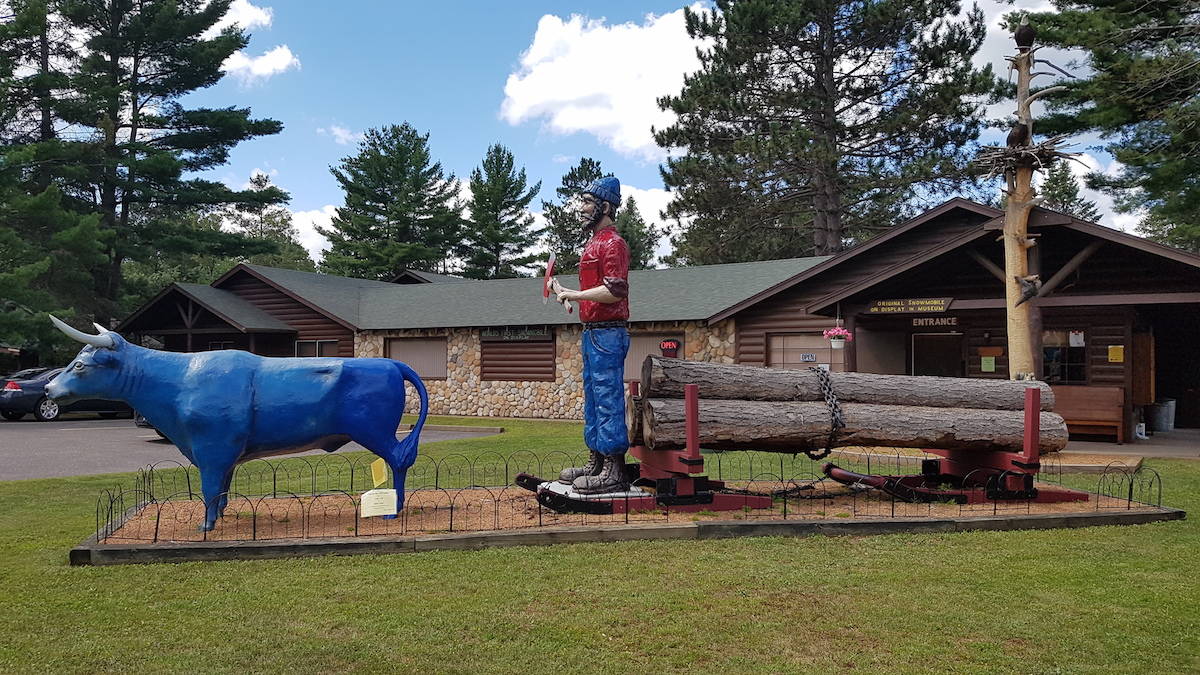 There are lots of surprises hiding between the trees in the Wisconsin Northwoods. In fact, one of my favorite heroes of traditional tall tales, Paul Bunyan, and his blue ox, were the first things I saw through the pines while driving into Sayner, Wisconsin.

A statue of Paul Bunyan, the legendary folk hero and logger, along with his blue ox, Babe, stands outside the Vilas County Museum in the Wisconsin Northwoods in Sayner.

If you’ve read and enjoyed these tall tales, you may know a lot about the adventures of Paul Bunyan and his ox, but do you know why Babe was blue? Don’t know? Click on the tabs above to learn more. 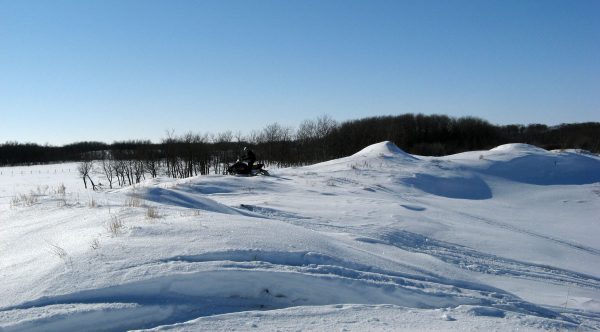 Paul Bunyan’s ox was named Babe–but why was Babe blue? Well, because legend has it (tall tale legend anyway!) that one winter in Wisconsin it was so cold the snow turned blue–including the baby ox that was too small to see over the snowdrifts. They say it was so cold even the fish had moved south for the winter!

Can snow really be blue?

Very pure snow can appear to be blue. If you’ve played around in photography you may have already seen what’s called blue coloration, caused by light wavelengths. Blue light goes through ice the easiest, and snow is made up of ice crystals. Read more at: http://sciencenordic.com/ice-makes-snow-white-blue-and-creaky

Just like Paul Bunyan,  the little ox, Babe, grew to enormous proportions. Some even say Babe was so big that 42 axe handles plus a plug of tobacco could fit between his eyes.

And why would you find Paul Bunyan in Wisconsin; well, there’s a tall tale about that too. One spring, no doubt after a winter with tons of snow, there was a mile long log jam as they tried to float out the winter’s chopped logs in the spring. Not only was it long–the jam was also high–200 trees high in fact!

Rolling logs at the Lumberjack Show in Hayward, WI

In came Babe and Paul to save the day. Paul took out his rifle, spraying Babe with pepper shot, so she swished her tail around thinking it was a swarm of pesky flies. Pretty soon the logs split apart, floating upriver, breaking up the jam. 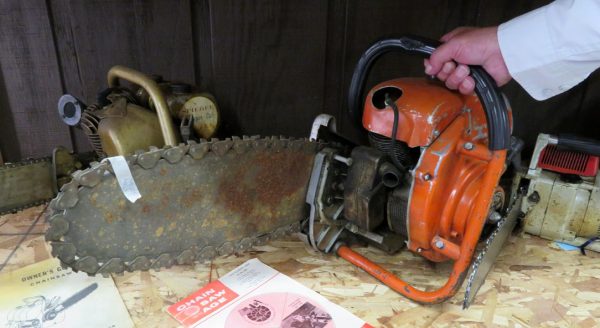 Giant chain saw–David is holding the handle so you can see just how big it is!

The Vilas County Museum is small, but delivers big on its tagline: The Northwoods the Way It Was.

Situated in the small town of Sayner right on the edge of town, its personality shines through starting with the statues of Paul Bunyan and his blue ox. Of course, they also serve as location markers making the museum easy to find on Highway 155. 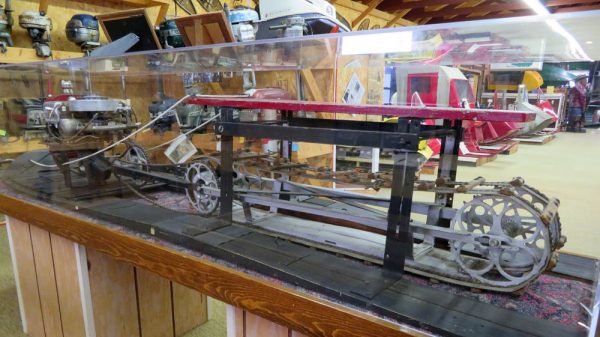 The snowmobile built and owned by Carl Eliason in 1924 displayed in a glass showcase.

Our main reason for adding the museum to our itinerary was to see the first snowmobile (patented as a snow toboggan). Carl Eliason had built it, back in 1924, to get around the bush in the winter.

However, I soon discovered a number of other fascinating finds! Here are a few of them. 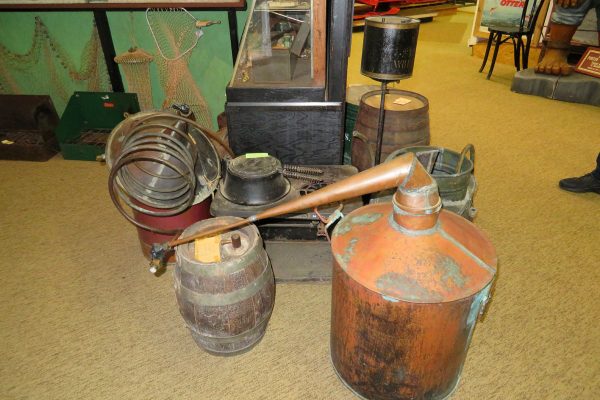 A still used for making home brew during the days of prohibition. 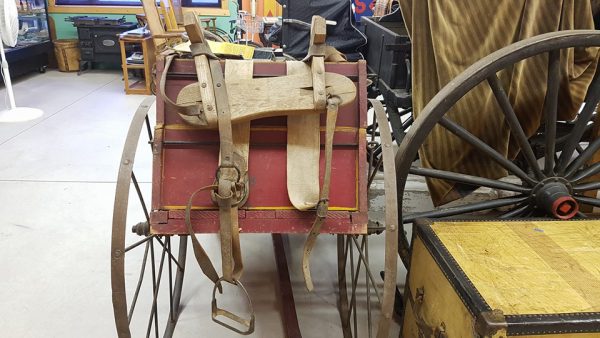 A wooden saddle (notice the stirrup on the bottom). 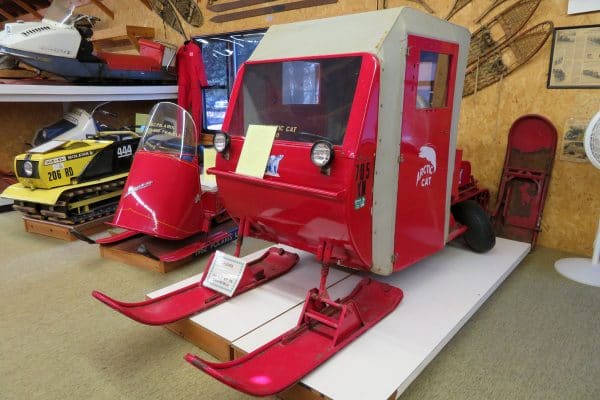 Winter transportation from the snow shoes to the snowmobiles to the 1963 Arctic Cat machine used on the first local organized snowmobile trail ride–it even had an $85 option to add a snowplow! 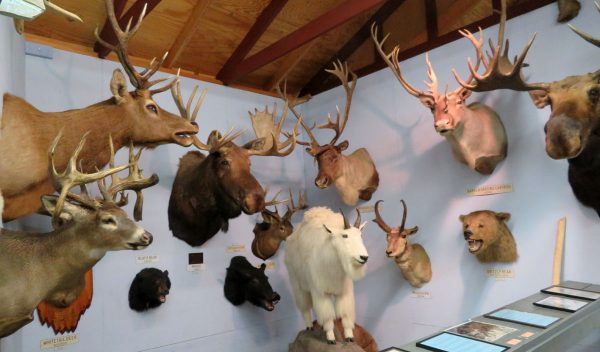 Several collections of mounted animal heads from local all the way to Africa! 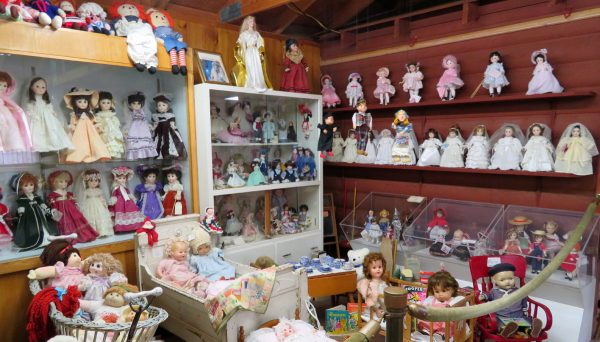 A beautiful collection of dolls from various decades.

Do you have any other favorite local museums that showcase their communities the way they were, like the Vilas County Museum does? Please just share them in the comments if you do. We’ve added CommentLuv to guide2travel so that if you leave a comment, your last blog post will be listed here if you click that option.