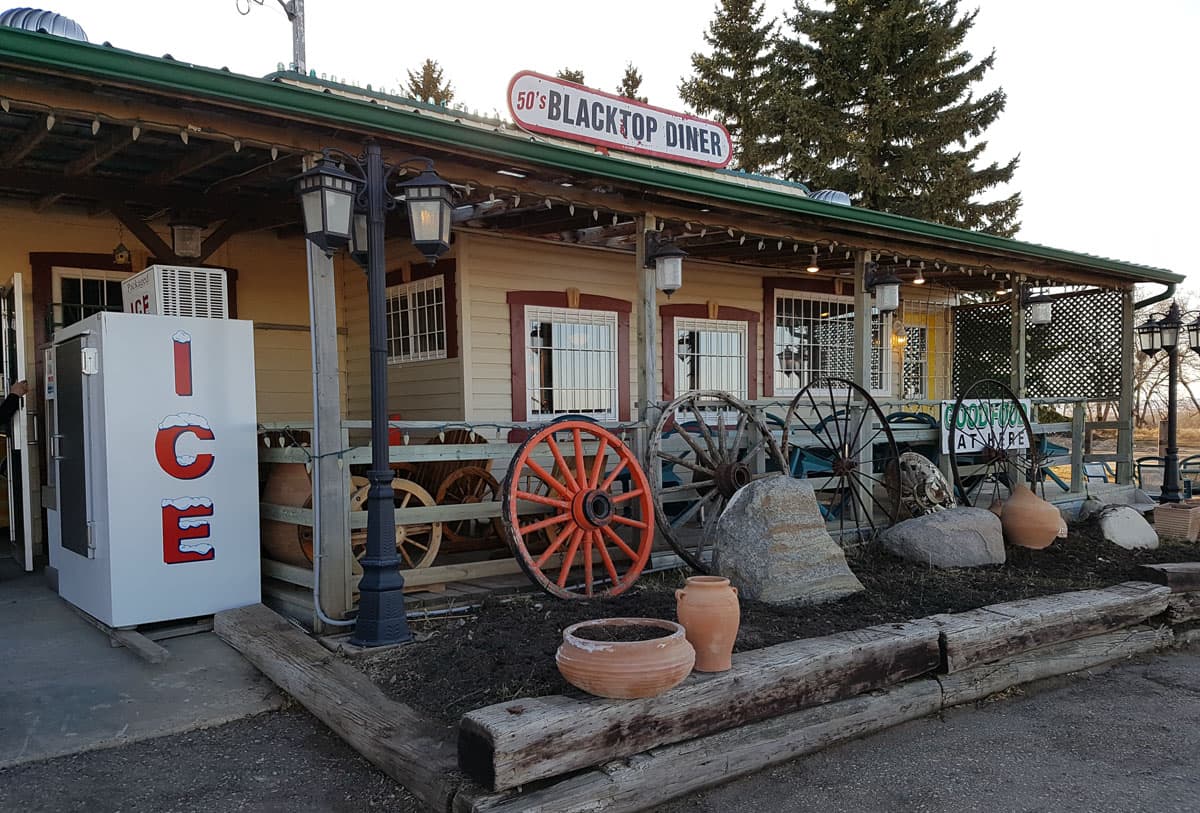 Traveling Saskatchewan’s highways, you come to expect the unexpected. A ship built to sail from land-locked Saskatchewan to Finland. A town celebrating its record of having Canada’s hottest ever temperature. A winery offering specialties from rhubarb or grape wine to black current and honey wine. 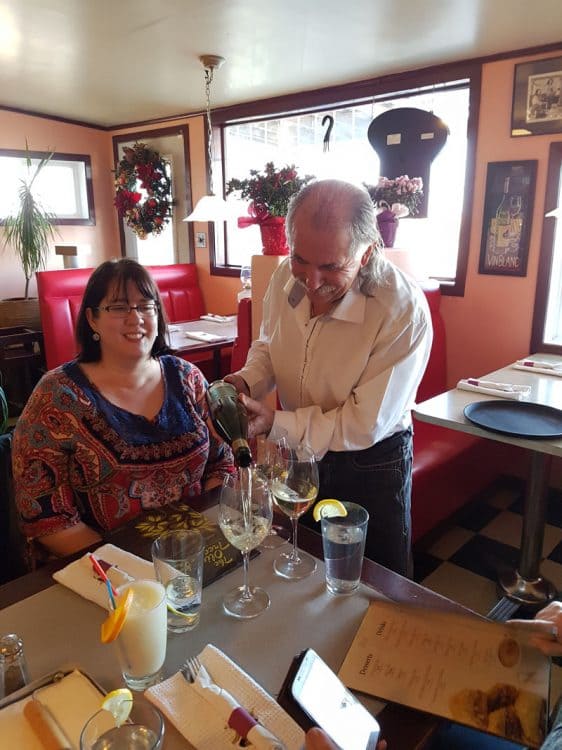 It’s certainly not the kind of place you’d expect to find a chef who has worked in one of the two seven-star resorts in the world! Especially, when you’re on a blacktop highway some 50 km or so north of the province’s largest city, Saskatoon.

Like many businesses outside of Saskatchewan’s cities, the restaurant is just one part of what they do.

When I walked in, I found Michael busily charging locals for the their gas purchases, as it’s also the River Bend Gas Station. While one part of the Gas station store has the typical supply of things like pop and fireworks, another section holds bottles of imported olive oil from Pantermarakis’s olive groves in Elounda, Crete. 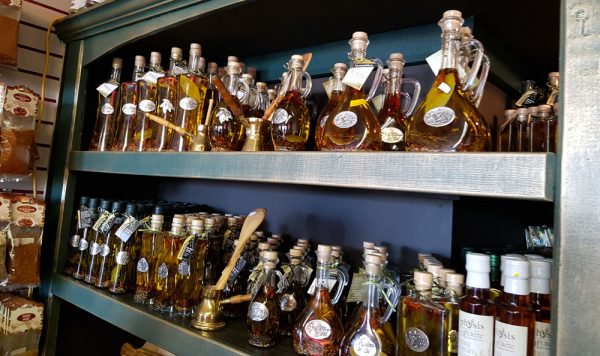 Pantermarakis grew up in an area where families cultivated their olives from generation to generation, always making and improving on their own oils. While olive oil in Canada usually has an acidity rate between 1 and 0.7, his Minoan oils rate at 0.2. The lower the number, the lighter the oil–his oil is organic, extra, extra virgin olive oil.

While Sinaki has only been in Canada a few years, Pantermarakis arrived in 1969. After retiring from an engineering career, he decided to become an entrepreneur. He now has a 1000 acre olive orchard on Crete, Greece’s largest island, which incidentally is also where Sinaki was born. 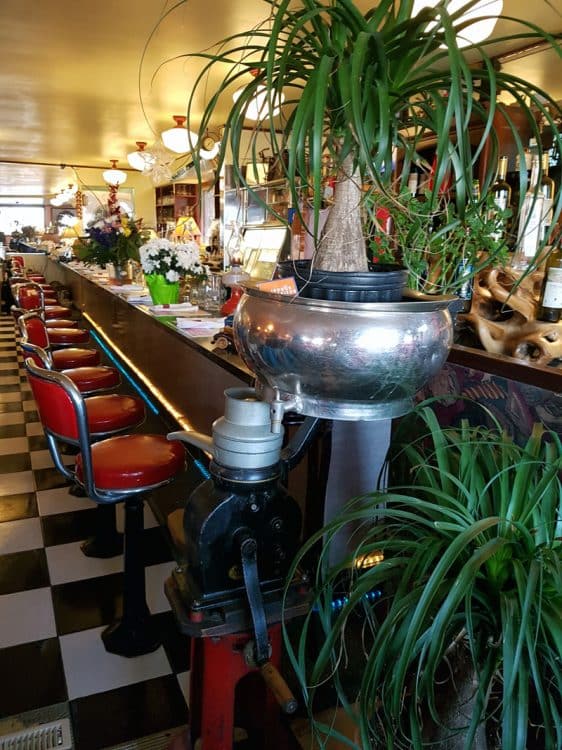 Bar stools from the Woolworth’s in Prince Albert.

And while a service station and Blacktop Diner may seem an odd place to set up a fine dining room serving Mediterranean cuisine, there’s more to the location’s story than you’d expect at first glance.

The restaurant truly is a 1950s diner that could have come straight from an episode of Happy Days. With its black and white tiled floor and red stools, it’s a flashback however from Saskatchewan’s past.

In fact, the furnishings are from the Woolworth’s Store in Prince Albert, Saskatchewan. What makes them even more iconic to the province though, is that John Diefenbaker, Canada’s 13th Prime Minister (in office from June 21, 1957 to April 22, 1963), often ate at that lunch counter in PA where he lived. His favorite stool now sits right beside the bar at the Olive Tree. Diefenbaker has been the only prime minister to come from the province. 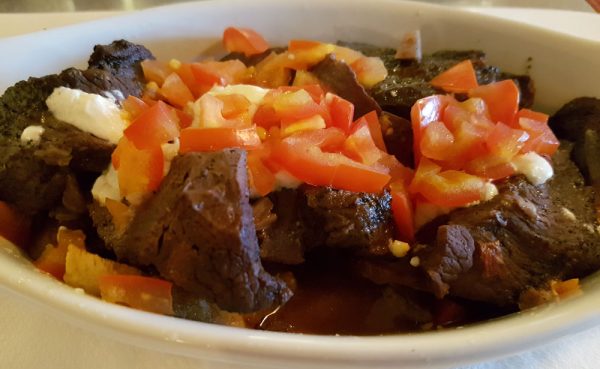 Sinaki takes great pride in preparing all of the meals from scratch. The signature dishes are mostly steaks–one of Saskatchewan’s most popular choices with its thriving beef industry–very lean meat, in 12 to 14 ounce servings. She adds her own touches with flambe of Grand Marnier, Jack Daniels, and other liquors.

On our visit, we also had the option of having lamb chops or a steak dish with cheeses and tomatoes. Delicious! 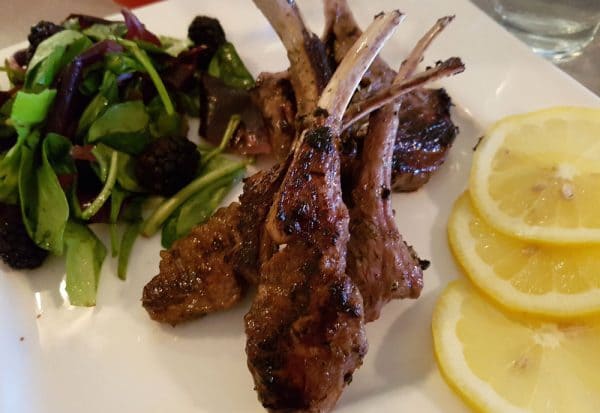 Many diners though, head to the Olive Tree for its Mediterranean cuisine five-course meals and wine list. I know our group of writers enjoyed every aspect of our dining experience from the decor to the Lagaria Merlot.

Situated on HWY 12 North, Near Petrofka Bridge about 50 km north of Saskatoon.

See the restaurant website for days open and phone numbers to call for reservations: http://www.olivetreerestaurant.ca/about-us