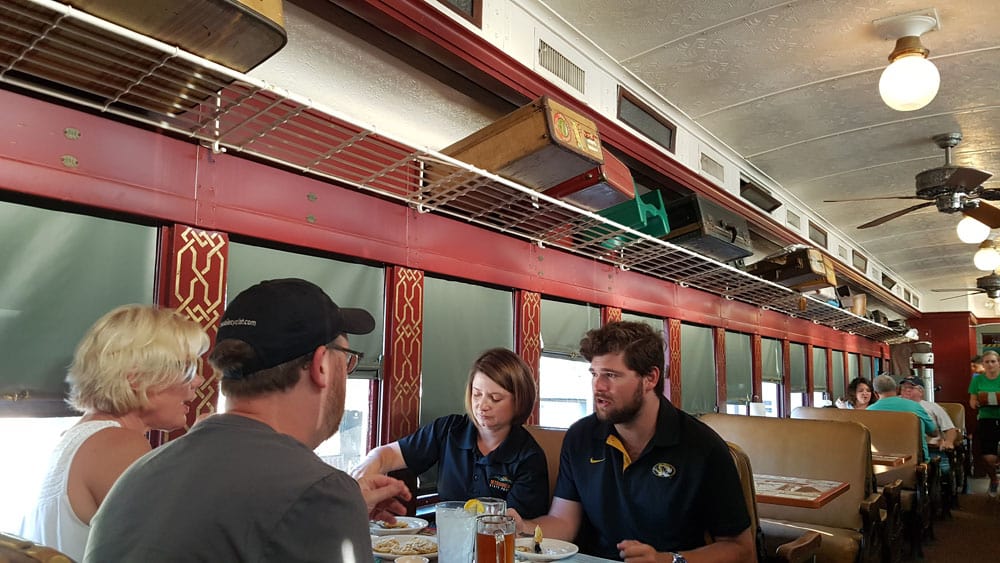 In the 1920s there were 10 million cars in America, but train travel still provided most of us with our only opportunity to travel beyond our immediate communities. In fact, it was the golden age of train travel, with 260,000 miles of train tracks by 1930. Amazingly, by the early 1930s trains even hit speeds of 100 mph!

But the convenience of the car and transport truck soon replaced trains for both travelers and freight. As you might imagine, that left a lot of railroad cars without jobs. One of those cars, a 1920 Pullman named the Kedhe Flyer, ended up in Sedalia, MO, at Kedhe’s BBQ, for the pleasure of local diners.

The 1920 Pullman railroad car at Kedhe’s BBQ arrived on the tracks in Sedalia in 1995. It was the last train car to travel southwest down what historic railroad line? (Don’t know? Click on the tabs above–Railroad Line and Kedhe’s BBQ.) 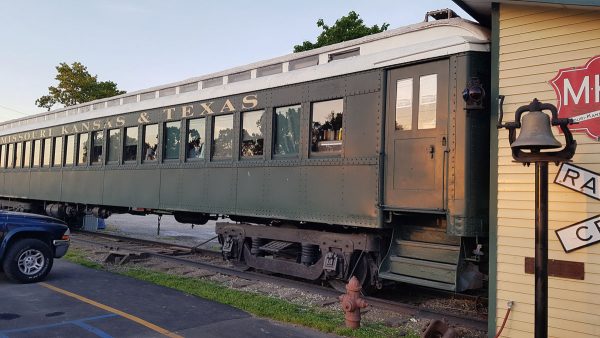 The 1920 Pullman railroad car named the Kehde Flyer arrived at Kedhe’s BBQ, in Sedalia, down the line used by the Missouri–Kansas–Texas Railroad (MKT), more commonly known as “the Katy.”

The MKT had incorporated several rail companies to become the Katy in 1870, expanding its line into the early 20th century. One of its strangest promotions was set up by William Crush, a passenger agent for the Katy Railroad, who saw the opportunity to get rid of two obsolete steam locomotives and create a money-making sporting event that people would take the train to see at the same time.

And what was that?

Well, he decided to crash two steam locomotives into each other and see what happened! Sure enough, he sold close to 40,000 tickets to the 1896 event, which was held in a natural amphitheater with four miles of specially laid track. The site, of course, was aptly named Crush, Texas, in honor of the idea man.

However, things rarely turn out as planned–or even expected.

The day of the event, three hundred police officers kept the growing crowd under control as people arrived all day by train (the event site had been disconnected from the main track). At 5 p.m. photographers gathered to take the “before” photos of the engines at the expected point of collision.

Once the trains were back in position, Crush waved his hat from where he sat on the back of a white horse, and the engines shot forward.

Black smoke poured out of the engine funnels over the crowd.

The sound of popping steam carried for a mile in all directions.

Torpedoes placed at intervals along the track exploded, heightening the crowd’s excitement.

Both giants rumbled towards one another, taking just two minutes to meet…

And when they did, there was a second or two of silence. Then, the two mighty giants disintegrated into flying missiles of iron and steel that shot out over the crowd, killing two young men and a woman, while injuring many others.

While Crush had been assured that the engines’ steam boilers wouldn’t explode upon impact even though the combined speed of the two trains hurtling at each other over two miles each of train track would be 90 mph, explode they did.

You can read the full story here at the UnMusum and watch their video below.

History of the Kehde Flyer

The Kehde Flyer served on the Delaware Lackawanna and Western Railroad until 1929. Then, it was converted to an electric traction car for the Erie Railroad until it was retired in 1989. The Kehdes purchased it in 1995.

The Missouri River floods of 1986 washed out large sections of the MKT rail line. Instead of repairing the damage, the trains were rerouted and the Missouri Department of Natural Resources purchased the right-of-way for use as one of the first rails-to-trails projects in the U.S. Used mainly for hiking and cycling, there are now over 30,000 miles of rails to trails across the U.S.

Opened in 1990, the Katy Trail State Park has continued to grow with additional pieces of abandoned rail lines. In 2016, it stood at 237 miles, with additions planned. For full details on where the trail runs and its facilities see: http://www.bikekatytrail.com/ 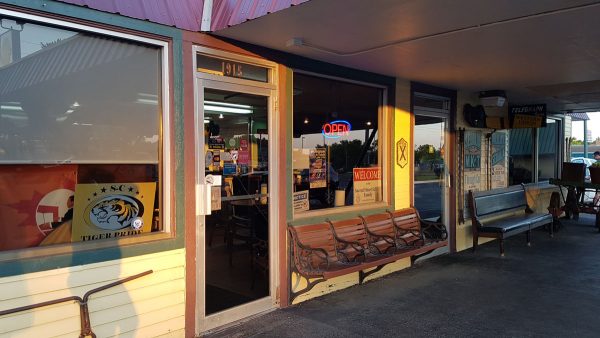 The Kedhe Barbeque Restaurant is about more than just the best BBQ food in town! Its motto, Committed to Excellence, really does show in both its service and food.

I, of course, had to try some BBQ on my visit. After all, when in Rome… While the menu offers the usual options of pork, beef, and chicken, I went for the unusual (at least here in Saskatchewan), and tried the BBQ Turkey, which was excellent. 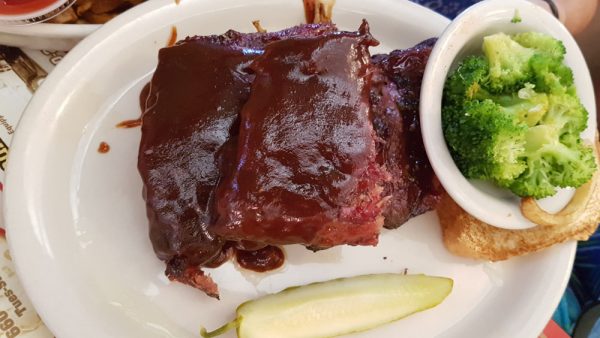 Potatoes are another favorite of mine, so when I saw the loaded baked potato I couldn’t resist — nor could I skip the baked beans. Just looking at the photos again, I can still taste that dinner! Delicious! 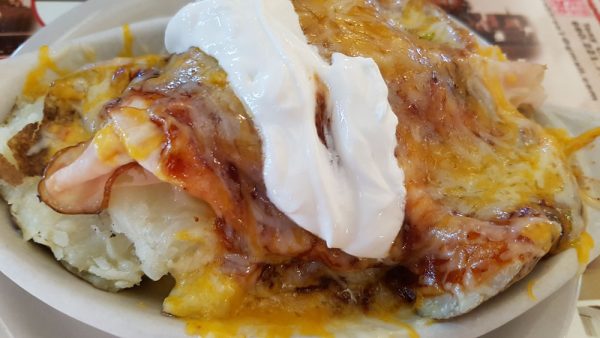 I visited Kedhe’s BBQ on a trip hosted by  the State of Missouri for a week of traveling along the Katy Trail in Missouri–I learned so much and visited so many friendly communities. I’d also like to thank theBeenders-Walker group for organizing the trip and taking such awesome care of my needs along the way.