What’s the difference between the Nevada Desert and the Great Salt Lake Desert? Well, one is in Nevada and the other is in Utah, for starters. However, as we discovered on this road trip, there’s a lot more to it!

Day 7 started out in Reno, Nevada, with a beautiful temperature of 51 degrees and a clear sky above us. We headed out into the Nevada Desert following Interstate 80. 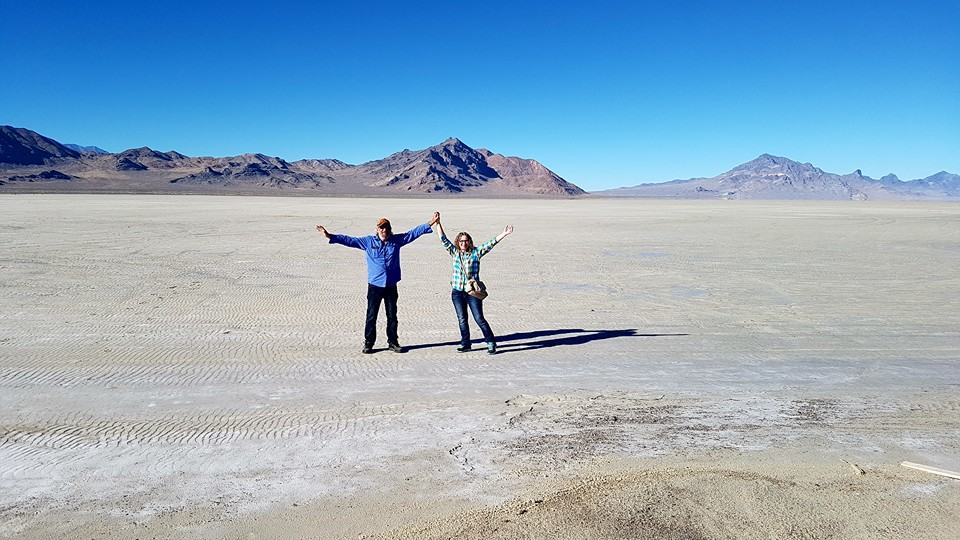 Since Reno is a high altitude desert, clumps of sagebrush cover the vast open spaces. At first, when we saw what appeared to be clouds of smoke coming from the ground in the distance, we assumed something was burning. As we got closer though, we realized we were seeing some of Nevada’s 300+ hotsprings. 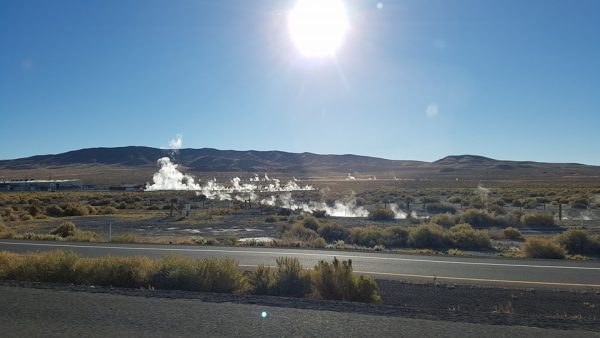 These didn’t have signs that indicated they were open to the public, though, so we motored on.

The first stop I had planned was to visit Galena, a ghost town at Battle Mountain, which I’d discovered on Road Trip Ryan’s website. According to Ryan, it was one of the best he’s seen. 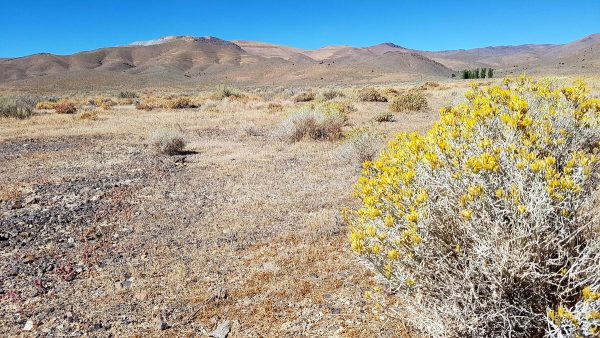 Desert on Hwy 305, about 9 miles from Battle Mountain.

We found the turns just fine with Ryan’s great directions, but soon discovered the rutted path/road through the field wasn’t really something suited to our Buick! So, we got out for a walk, took some photos, and headed back to Battle Mountain for lunch instead.

There we discovered The HideAway. And if you’re ever in Battle Mountain, we can highly recommend the homemade soups and fresh-from-the-oven dinner rolls. Yum! 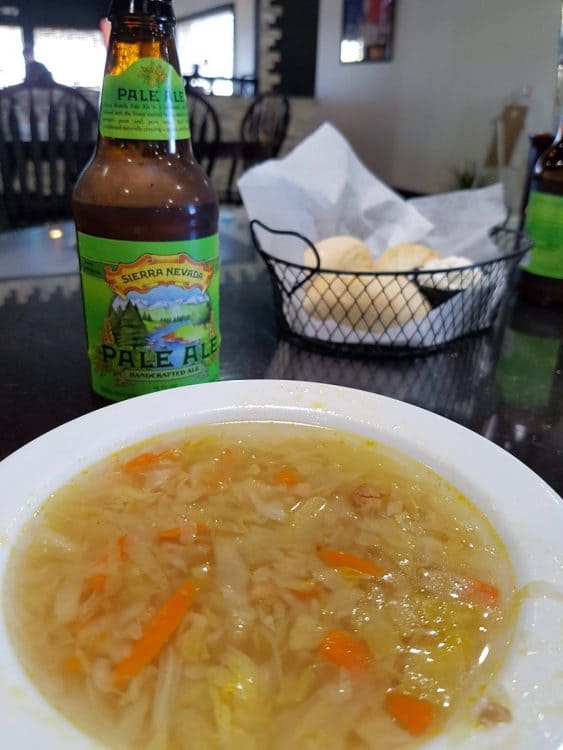 Lunch at The HideAway Restaurant & Bar in Battle Mountain, Nevada.

Even though I didn’t get to see the ghost town, I was determined to learn more about the area’s history. So, we pulled into Wells, Nevada, to the Visitors Center and Trail of the 49ers Interpretive Center.

Ron, a local resident, took us through the small center, sharing stories of the past and present of this historic little community. I found all kinds of interesting bits of information in the displays, such as that in the 1800s coins were the only Federal currency. Banks could print their own money–however, the money was really only good at the bank that made it! In fact, it wasn’t until Abraham Lincoln signed the National Banking Act in 1863, that there was a Federal U.S. currency.

And of course, there were various artifacts from the gold rush and settlement eras. 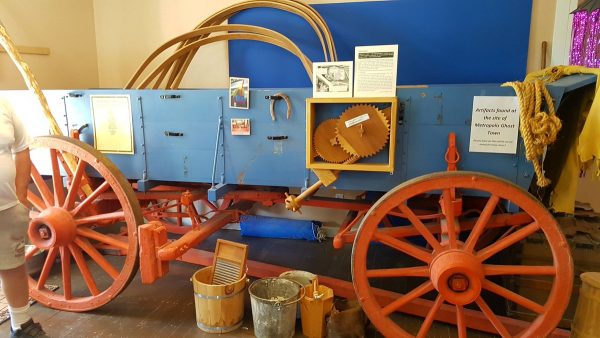 Trail of the 49ers wagon at the Interpretive Center in Wells, Nevada.

Happy to have learned a little about the Nevada desert history, we headed back out to I-80, intent on visiting a site that we’d been reading about for about as long as we’ve been reading — the Bonneville Salt Flats. (See photo of us above!)

While most people follow the annual speed week and records set, few are familiar with the snowmobile speed records set there. It was awesome for us to see the event site after seeing a number of snowmobiles modified just to run on it in our museum visits. 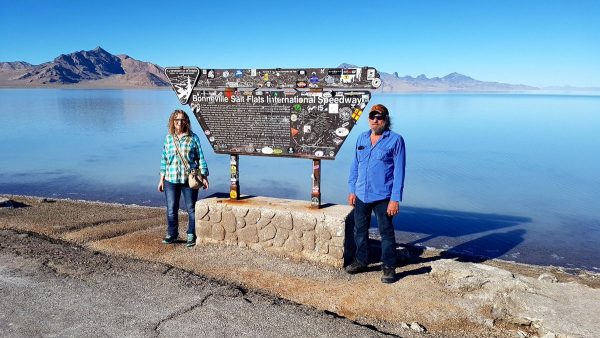 But what about the salt flats? They were formed at the end of the last Ice Age, when Lake Bonneville, which was nearly 1000 feet deep and covered about 2/3 of the state, began to recede. As the fresh water disappeared, the minerals in the water accumulated in the soils (gypsum and halite or common table salt).

While they took thousands of years to create, the Bonneville Flats are changing rapidly. Heavy rains and ensuing mudslides altered the track considerably several years ago. So, instead of the nine mile course of previous decades, the available racing surface is just 2.5 miles long. Water lies on top of much of the flats, so speed runs were cancelled for several years.

The Bonneville Salt Flats are located just off of Exit 4 on Interstate 80 in Utah, just before reaching the Nevada state line. There’s no charge to visit the site, but you’re asked not to drive on the salt flats. 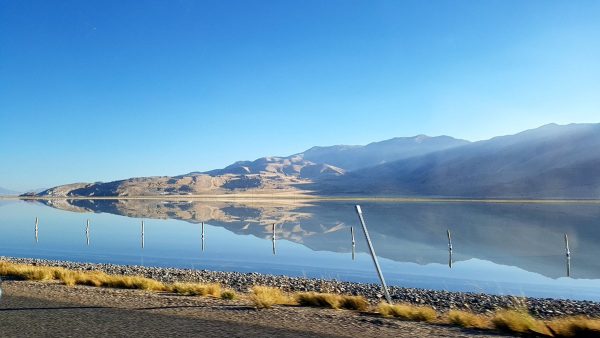 Leaving Bonneville, we headed back to Interstate 80, which we discovered runs dead straight for almost 50 miles, between Wendover on the Utah/Nevada border and the Cedar Mountains to the east. When we reached the outskirts of Salt Lake City, we were ready for a hotel and dinner!

And what tops off a great day on the road in the desert better than dessert? 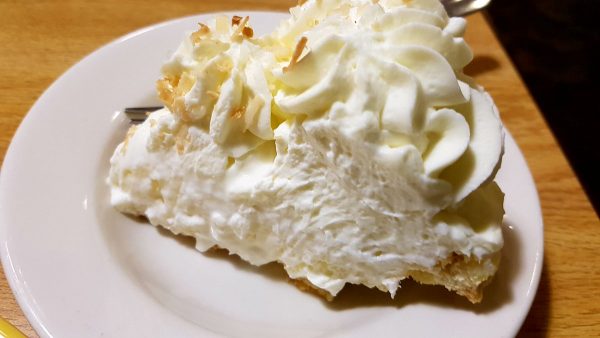