The Pacific Coast Highway, Highway 101, is the one of the most well known road trips in America–and with reason!

No matter what name it goes by, Highway 101 is an ever-changing drive down the coastline of the Pacific Ocean. Sometimes you can feel the salt spray, though, and sometimes, you can’t see through the redwood forest in any direction, even up! 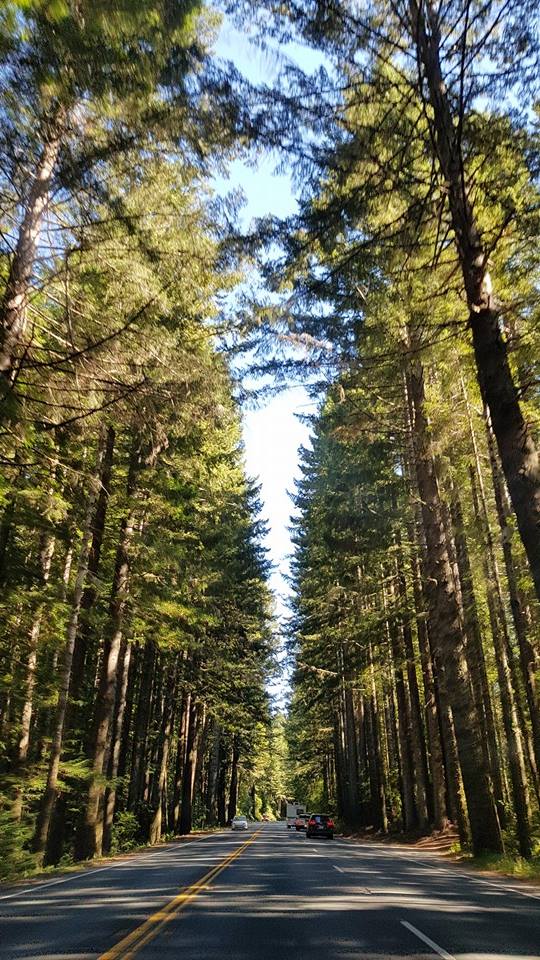 Our day began in Florence, Oregon, with our first stop on US 101 Milepost 200.7 at the Oregon Dunes Overlook. The shifting sands spread out beneath the overlook with the water a blue band beyond it. The dunes actually run for nearly 50 miles and at their highest points reach up to 50 feet! 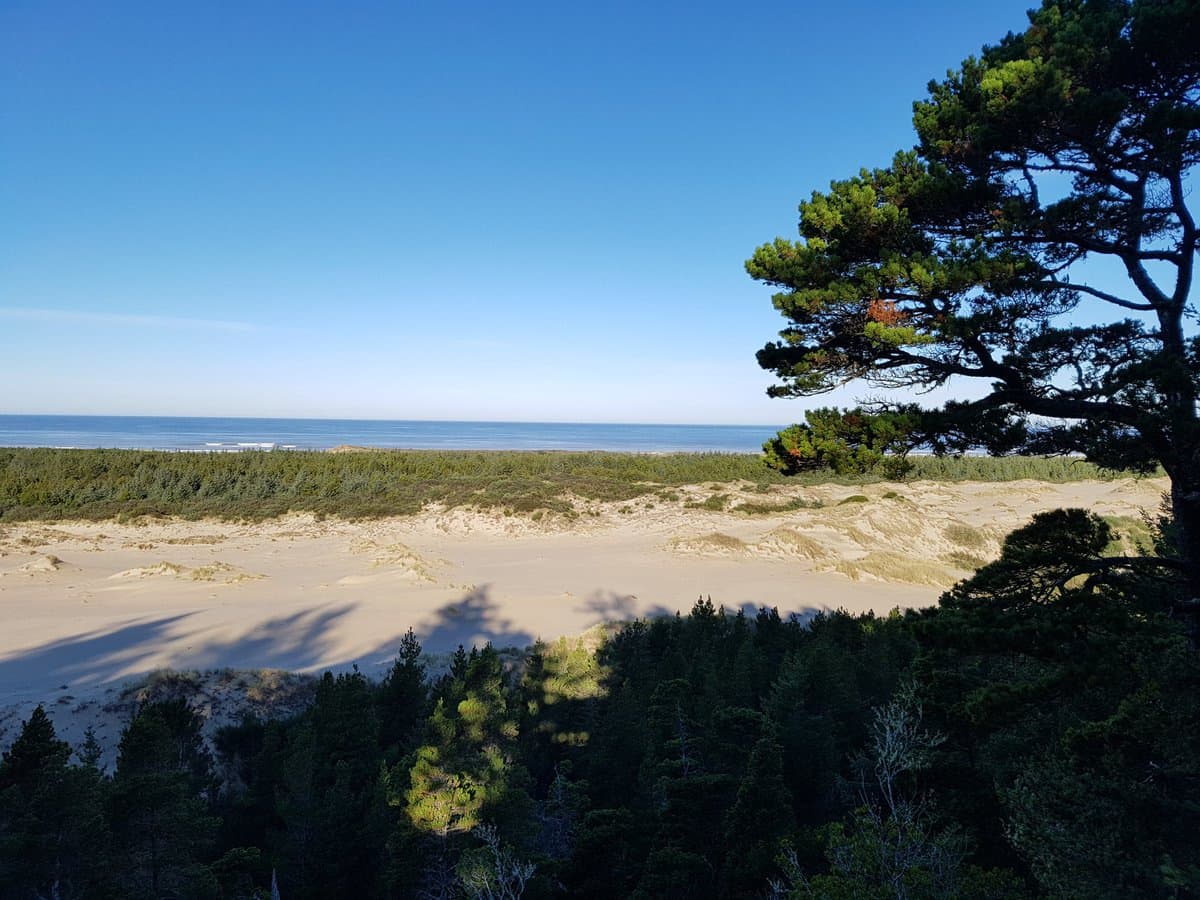 From there, it was back out on the US 101 to Milepost 216.7 and the Umpqua Lighthouse State Park. First built on this site 165 feet above sea level in 1857, it was lost to flood in 1864. The current structure was completed in 1894 and used oil illumination, which was changed to electricity in 1934.

It’s a great vantage point for whale watching, although we didn’t see any. While I tried the viewing stations, I couldn’t figure out what the triangle shaped rock “pond” in the water was all about. A local guide though, was happy to answer my questions, and tell us it was oyster beds. 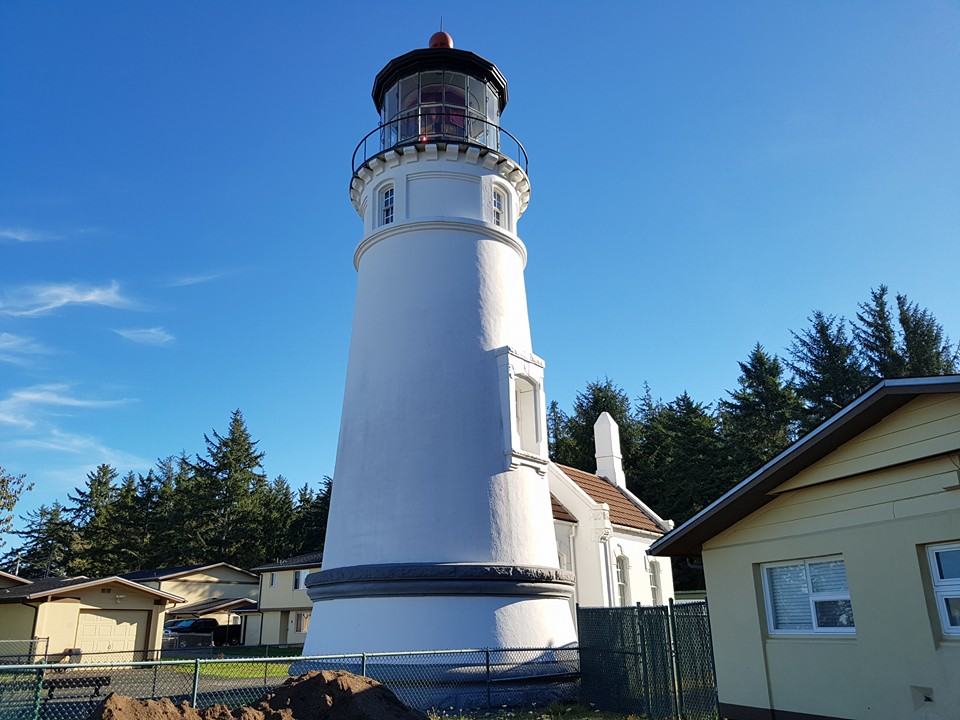 The dunes here were taller than at the overlook, and I had to watch for quite a while to find the source of the zing of two-stroke engines — motorcycles zipping through the dunes along with a couple of other ATVs.

Bandon was our next stop — breakfast and exploring the Old Town, 10 square blocks on the Coquille River. 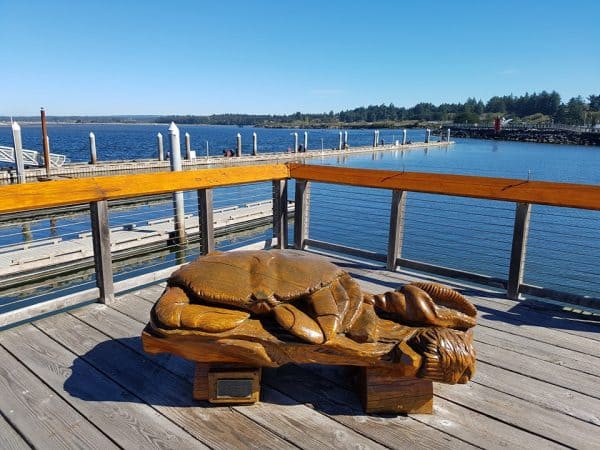 There’s lots to see, whether you just want to watch the action in the harbor with people crabbing off the docks, or wander around and enjoy all the pieces of public art. We did both!

Back on Highway 101, we wound through a lot of curves and crossed a number of bridges — several of them under repair, so the highway was down to a single lane with traffic lights to monitor the flow.

As we climbed in altitude, so did the temperature, hitting 90 degrees! However, a walk in the incredibly deep beach sand and dipping our toes in the Pacific Ocean helped with that. 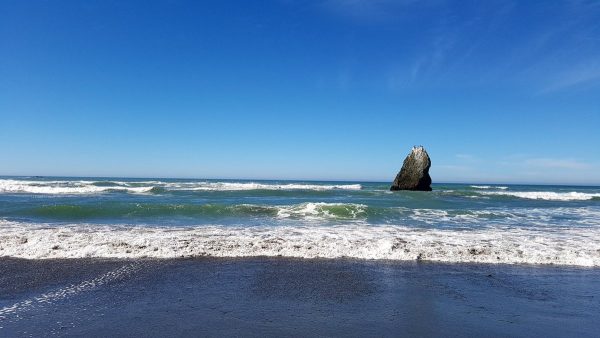 Walking in the sand on Gold Beach.

We were surprised to find an Inspection Station between Oregon and California on Highway 101, with a lane for trucks and a few lanes for cars. While we were waved through with a smile, I had to check the Web to find out its purpose. What was it? An agricultural “bug station!”

Our goal for the day, though, was to get to Trees of Mystery, an attraction in the Redwood empire between the Redwood National and State Parks. Situated just outside of Klamath, California, the main trail is 8/10 of a mile long. It introduces you to a variety of species of giant trees providing heights and ages. 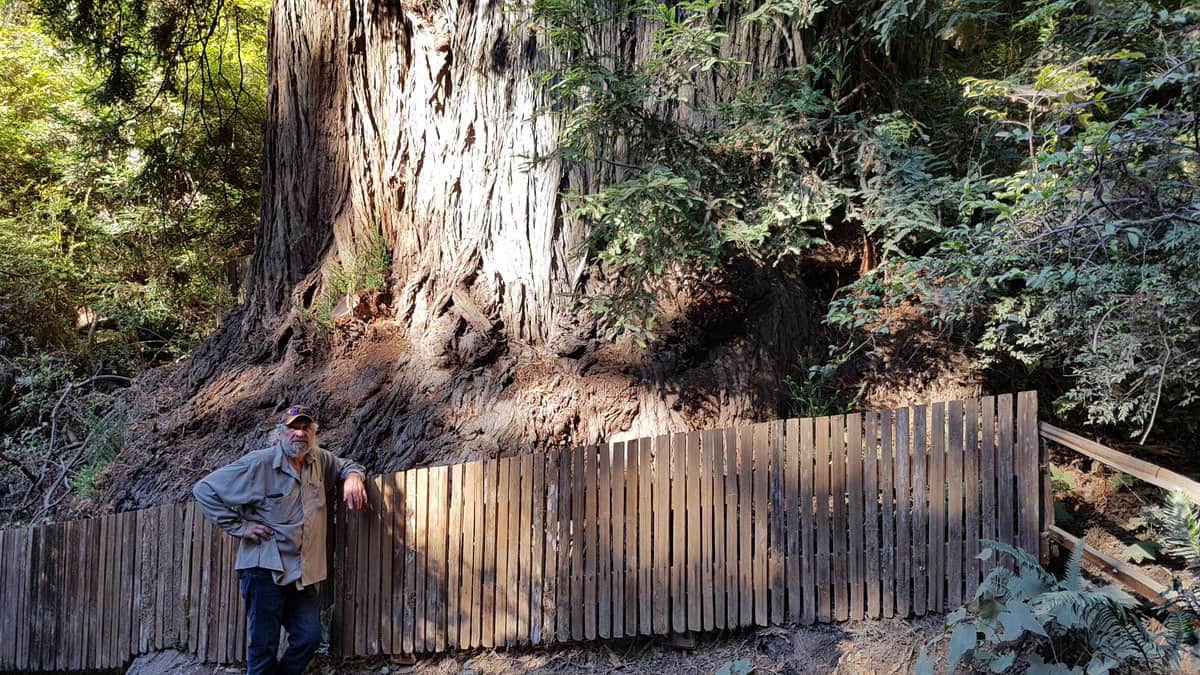 David with a giant redwood tree.

The hike was amazing–and the Sky Trail even more amazing.

While we chose to walk through the trail to the gondola ride, there is a shuttle service available. The cost of the gondola in included with the general admission fees ($16 for adults), and there was no waiting the day we visited. 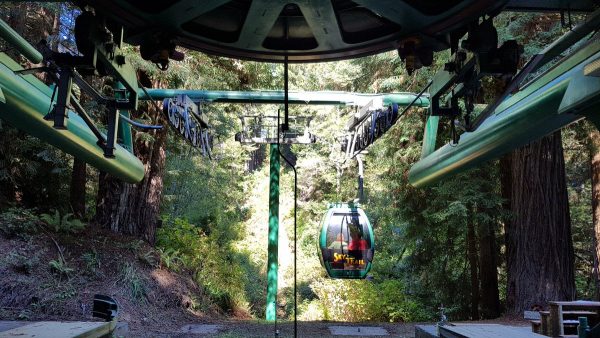 Gondola ride on the Sky Trail at Trees of Mystery in Klamath, California.

Each gondola holds six people in an enclosed plastic “bubble.” It glides up the mountain between the treetops of the giant redwoods for 7 to 9 minutes, eventually reaching Ted’s Ridge. And if you think the trees look enormous when you’re standing under them, you’ll be shocked how enormous they are when you’re at the top of them looking down!

We got off the gondola at Ted’s Ridge and spent some time at the viewing station, before getting back on board. There’s a 1/3 of a mile Skytrail down that you can walk, though, if you’d like to see it all from the underside.

As you leave the main trail after the ride, and head back to the Gift Shop, the path leads through The Trail of Tall Tales with the folklore of Paul Bunyan. It’s lined with chain saw art of many of the characters in the stories. And outside Trees of Mystery, you find the legend himself in true redwood size! 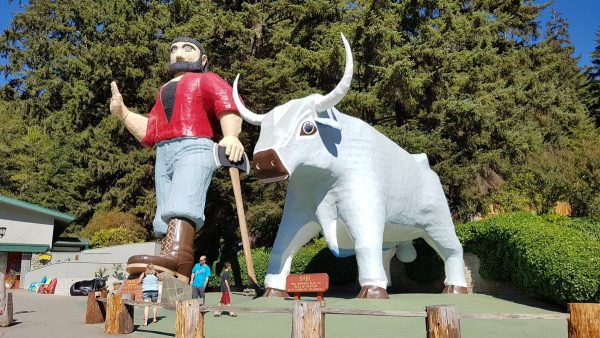 Paul Bunyan at the Trees of Mystery in California.