If you need an adrenaline rush on a regular basis, you may have developed that need at an amusement park as a child. Whether you had one locally, or in a driveable distance, like my kids did with Calaway Park outside Calgary, Alberta–or made do with the summer fair the way I did as a child, there’s nothing better than crazy speed and wild whirls to thrill.

And people have been getting those thrills at amusement parks longer than you may think. It’s hard to believe, but the world’s oldest (still operating) amusement park opened outside Copenhagen, Denmark, at Dyrehaven, Bakken, in 1583! 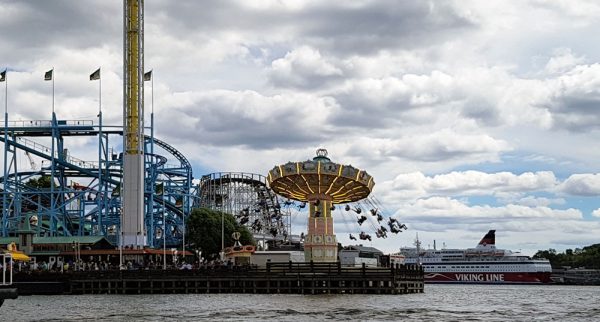 Of course over here, in North America, we were barely to the age of exploration in 1583. It was a lot of years later that the Connecticut amusement park (also still operating), Lake Compounce, opened in 1846. Canada lagged behind, with Vancouver’s Playland Amusement Park not opening until 1958. (The PNE, where it’s situated though, opened in 1910)

This summer, on a trip to Stockholm, I got acquainted with the oldest amusement park in Sweden, Gröna Lund, which is old, but not nearly as old as Copenhagen’s.

How old is Gröna Lund, Sweden’s oldest continuously operating amusement park? (Don’t know or want to see if you guessed right? Click on the tab above, Gröna Lund History.)

Gröna Lund amusement park opened in 1883 on the island of Djurgårde. While visiting Stockholm, I got to the park on both the Hop-On-Hop-Off bus and boat tours.

It’s a great hop-off point no matter what form of transportation you choose, because it’s close to other great attractions like the Vasa Museum, ABBA the Museum and Skansen park.

You’ll also find the architecture around the park interesting, as many buildings are from 1800s. Originally, Gröna Lund was just a small park, but in 1883, Jacob Schultheiss rented the area to put up the carousels and other amusements.

Today, there’s a full range of 30+ usual rides at Gröna Lund including roller coasters and free-fall, ferris wheel, magic carpet, haunted & fun houses, and rides for small children. It also hosts a number of concerts throughout the year. Click here for information on visiting.

Check out this infographic on the world’s most visited amusement parks created by Park Scout. Click here to see the full size infographic.