10 Things to See & Do in Historic Jefferson, Texas 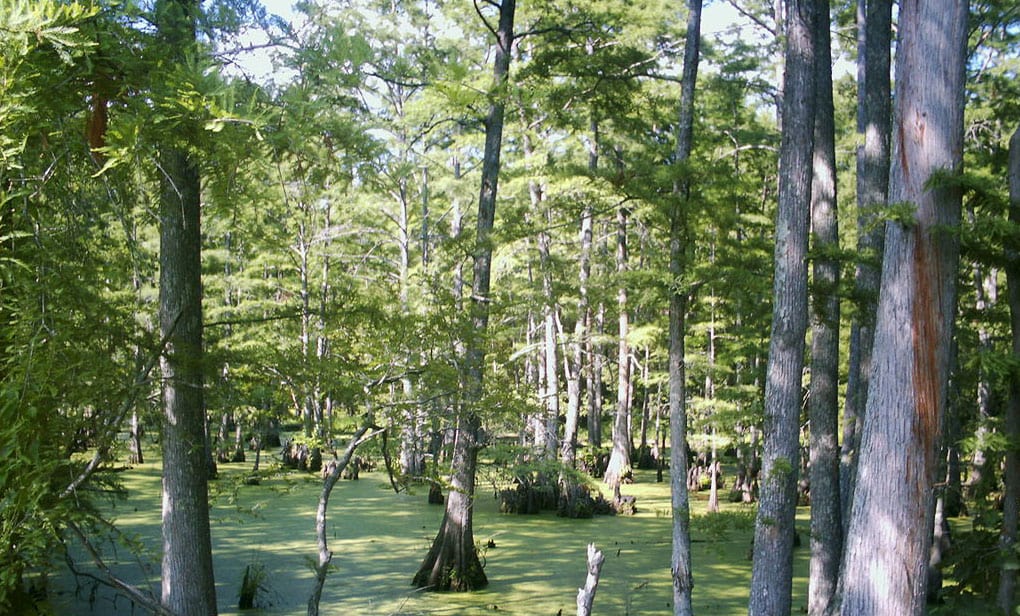 Set in the heart of Big Cypress Bayou, the sleepy little town of Jefferson, Texas, just over the Texas border from Arkansas, has all the charm and history of the deep South. We discovered it on a road trip to Louisiana, when we ended up with half a day to explore. It’s an especially great place for baby boomer snowbirds, who enjoy off-the-beaten path destinations, on their annual trek south.

While I don’t think of Texas as Bayou country, the fact is that Big Cypress Bayou’s wetlands, on the western edge of Caddo Lake, make up part of the largest Cypress forest in the world. Visitors can explore this fascinating habitat with hour-long narrated Bayou Tours. 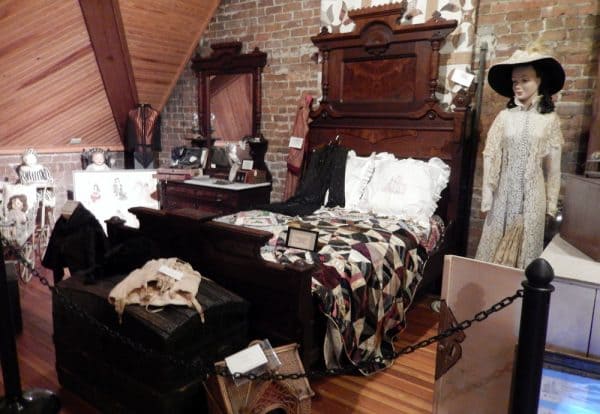 Museums are always a great place to begin for history lovers, and Jefferson’s Historical Museum doesn’t disappoint. The building itself (circa 1888) started out as the Post Office and Federal Court House back in Jefferson’s days as the Queen of the Bayou during its golden era.

Inside, there were lots of great artifacts. My favorites included a dress worn by Lady Byrd Johnson (she was born in nearby Karnack,Texas) during a state visit from a German Chancellor, an impressive display of saddles, and a vintage spinning wheel. 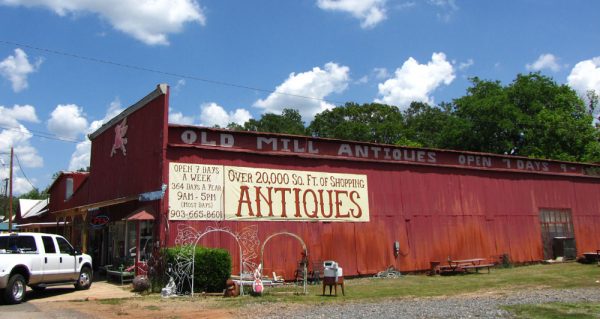 While museums are great for seeing things, a lot of us are collectors of vintage memorabilia these days. If that’s you, Jefferson Old Mill Antiques is a perfect stop. Located in a feed mill built in 1910, there are lots of treasures to dig for. We found many vintage games and toys, as well as china collectibles — and David came home with a Bowker knife, still in its original packaging. 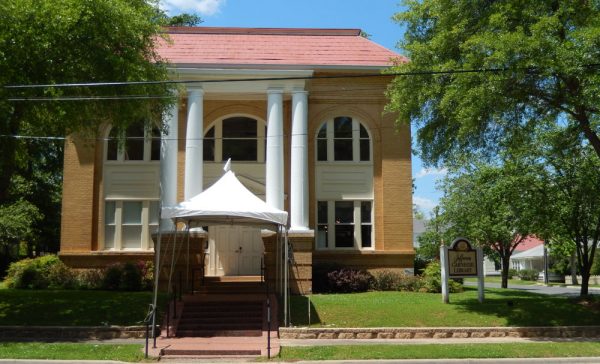 It’s been years since I was a librarian, but I can’t resist visiting Carnegie Libraries when I find them still open in small centers across the country. Jefferson’s Carnegie Library was built in 1907, and is only one of five from that era still serving as a library in the state. Inside, the building is perfectly preserved, with bookshelves standing in the shadow of enormous stately columns.

Red brick streets might have been the norm in bygone eras, but they’re not readily available these days except in walking malls. However, in Jefferson you’ll still find the original red bricks that have seen the clip-clop of horse’s hooves as well as squeal of rubber tires.

There are 18 buildings on the National Register of Historic Places in Jefferson, many open for visiting. As well, there are 195 state historical markers county-wide. 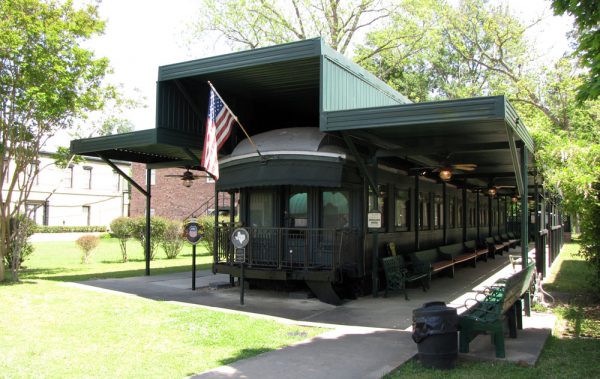 They say railroad tycoon, Jay Gould, put a curse on the town of Jefferson when it refused to grant him a right-of-way in 1892. He told them, “You will live to see the day when weeds grow in your streets!” It seems pretty ironic, then, that Gould’s luxurious private train car would end up as a museum permanently parked across the street from the Excelsior Hotel where he made the prediction.

The car has had an interesting history, even serving as a family home at one point. Today, it has been restored to its original state, giving us a glance into the lives of the rich and famous in the late 1800s.

You can also travel on the historic Jefferson Railroad through the Big Cypress Bayou, stopping at the Diamond Don Gator Pit to see alligators. Or, if you’re interested in more mythical creatures, the train rolls by the home of the Boggy Creek Monster, a Bigfoot type creature, featured in the movie Boggy Creek: The Legend is True, filmed here. 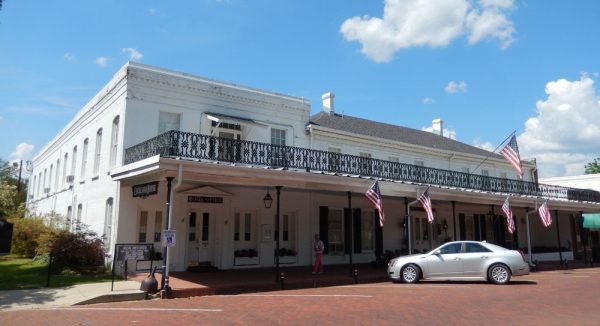 The Excelsior House Hotel has been in continuous operation since the 1850s. And while it turned out we didn’t have time to spend the night in Jefferson, I sure wished we had, so I could have tried out one of the historic rooms.

There’s no shortage of rooms named after famous folk who’ve stayed here either, since the list includes the Grant Presidential Room, the Hayes Presidential Room, and the Lady Byrd Johnson Room, just to name a few! Even if you can’t stay, though, stop in and take a walk through the charming Southern style property. 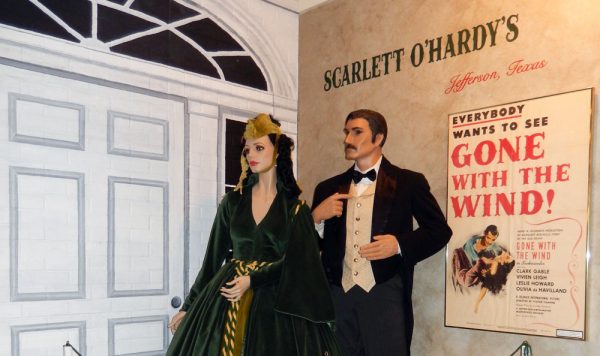 Gone With the Wind Museum in Jefferson, Texas.

Scarlet O’Hardy’s Gone With the Wind Museum was one of the attractions that specifically drew me to Jefferson. I’d loved that movie as a teenager. In fact, the movie was probably where my love of the deep south started.

O’Hardy’s Museum was packed with movie artifacts she collected over the years, before finally deciding to share them with the public through a museum. From dolls and posters, to games and gowns, it’s a great place to get a glimpse into the love affair the nation also had with the movie. 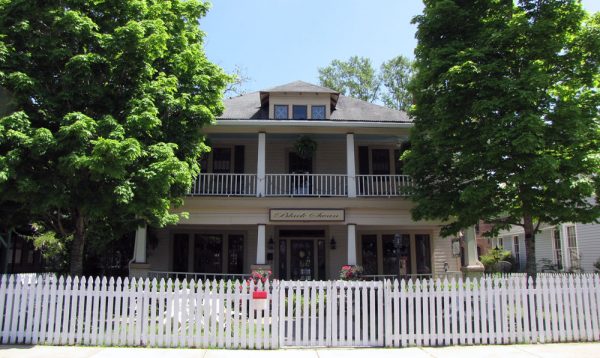 Black Swan B & B in Jefferson, Texas.

If the Excelsior House Hotel is booked full, there are lots of opportunities to experience an historic night in Jefferson — and maybe even meet a ghost or two!

The Black Swan B & B, right across the street, is an American Foursquare built in 1904. There are also more than a dozen other B & Bs available, ranging through a variety of home styles and prices. Even if you don’t stay, it’s fun to drive around town just to see them. 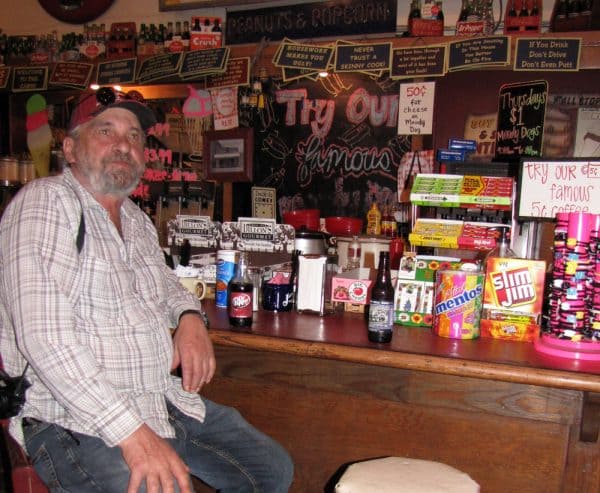 The Southern dining experience is always great — and Jefferson is no exception. With more than a dozen eating places to choose from, there’s something to suit no matter what you’d like on the menu or what time you want to eat or drink. Since it was a hot afternoon when we visited, we chose to pull up a stool at the Jefferson General Store and have a couple of ice cold sodas!

Jefferson is about 2.5 hours east of Dallas. See the Google map below.