Rice pudding is one of those desserts that has a place in almost every culture around the world–with variations to suit each one. In fact, for thousands of years rice pudding was considered a good way to treat stomach ailments. If you’re like me, you may have even fed your babies rice pablum, since rice is easier for many to digest as it doesn’t contain gluten.

However, while I love boiled rice, fried rice, wild rice, brown rice, well, rice in pretty much every form, I don’t like rice pudding. Or didn’t, until I tasted some traditional rice dessert squares, or Bibingkang Kanin, on my trip to the Philippines.

There are many ways to make Bibingkang Kanin, with a popular modern version using coconut milk along with rice. However, a traditional version of Bibingkang Kanin contains a different liquid. Do you know what it is? (If you don’t know, or want to know if you’ve guessed right, click on the tab, Bibingkang Kanin, above). 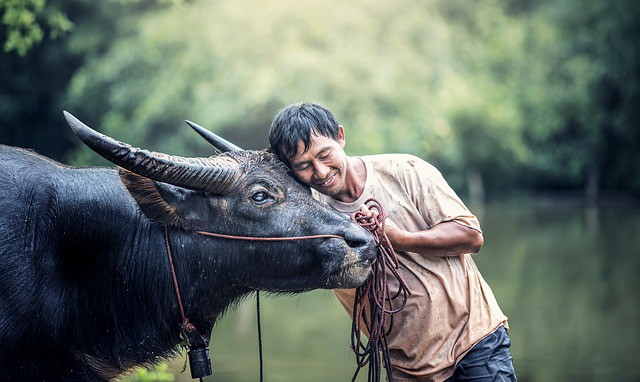 Water buffalo in the Philippines. Photo from Pixabay with a CC license.

Traditional Bibingkang Kanin is made using domesticated Water Buffalo, or carabao, milk. The carabao has been important in the Philippines for generations, much as the oxen were here in North America. From plowing the rice fields to providing milk for families, the water buffaloes of Southeast Asia are viewed as faithful partners in life with good reason.

My introduction to the Bibingkang Kanin rice dessert was through the Milka Krem Coffee Shop in Muñoz, Philippines. I was on my way from Banaue to Manila on the Maharlika Highway, hurrying to get out of the way of Super Typhoon Haima, so driving instead of taking a flight as planned for the next day. The stop, our guide explained, would be a nice dessert–and it was.

Bibingkang Kanin dessert, no doubt due to the carabao milk, tasted rich and sweet, not at all like a milk-made rice pudding. If I was to compare it to North American desserts, I’d have guessed it contained condensed milk. Brown sugar gave it the carmelized looking top and the rice, a firm texture.

Milka Krem opened in 2012 as a way to provide a commercial market to local producers of carabao milk. Typically, farmers only have access to what’s referred to as the backyard market, or locals who want to buy the product. The PCC dairy plant just beside Milka Krem now purchases excess milk that’s produced by farmers and small cooperatives, then transports it to the plant for processing.

Click here for this rice dessert recipe or watch the video! 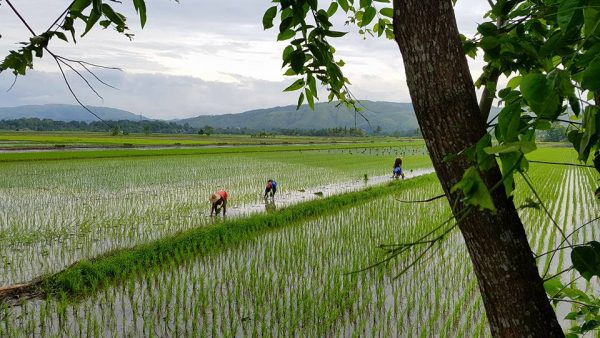 You can take the girl off the farm, but you can’t take the farm out of the girl, so I find it fascinating to get some insights into local agriculture when I’m traveling. While the 12-hour drive I ended up taking on the Maharlika Highway outrunning the typhoon was long, it wasn’t boring. As the terrain changed from mountain tops to lowlands, I spent the time checking out a lot of swampy land being utilized to grow food and graze the carabao tethered near farm homes.

According to our local guide, the commercial rice fields have three harvests a year. It was easy to see that we were in the middle of planting season, with many workers bent over working in the muddy water. Here and there, we saw small machines, like large roto-tillers, also being used to work the rice fields.

November is National Rice Awareness Month in the Philippines, and with good reason. It’s the main source of food for the 100 million people who live there, making the Philippines the world’s eighth largest producers of rice. However, the country still imports even more rice as it doesn’t have the land base to grow enough to feed the population.

Interested in rice production? This is a great video from Agribusiness, How it Works.