Adventures on Horseback: Crossing the Cumberland River and the Daniel Boone National Forest 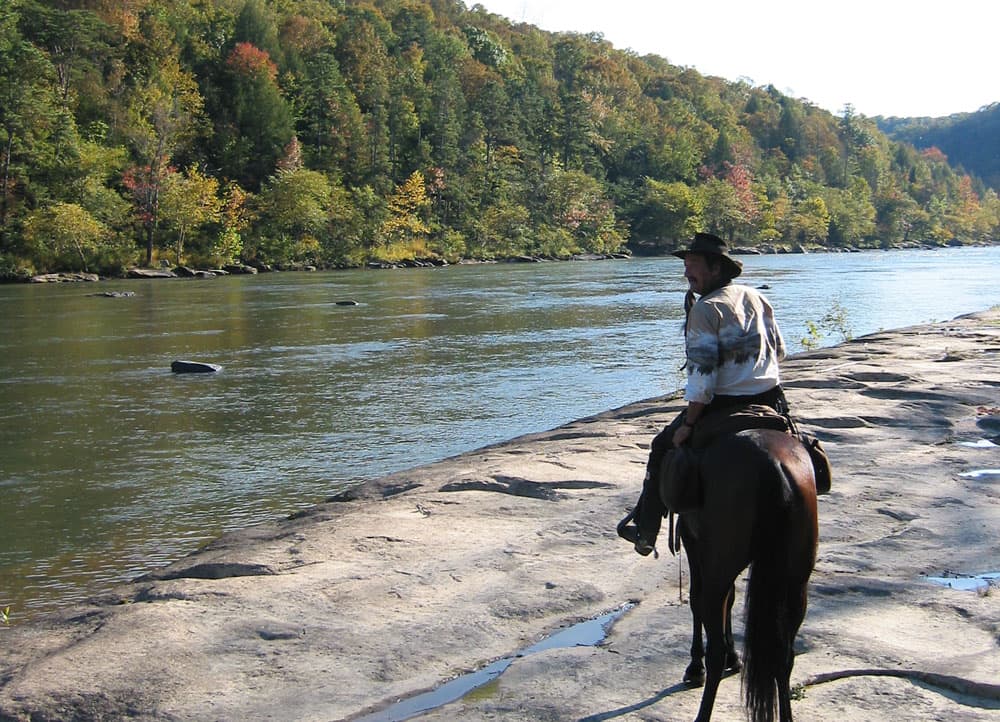 The Cumberland River was wide—a ten-lane highway dividing a wilderness of granite and the Daniel Boone National Forest. Crystal clear, the water rushed forward catching in swirls and small rapids that glistened in the bright afternoon sunshine. The trail boss, Bill, let his horse pick her way between the rocks and choose a spot to cross.

His arm waved us forward. “Wait until I’m across, then head out. Keep your eyes on the me on the other side. Don’t look down or you’ll get dizzy. Keep your horses out of the rapids, where it’s safe.”

The instructions seemed simple enough, but my heart was in my throat anyway. Images of Billy Crystal in City Slickers, riding into the water and nearly being swept away filled my mind. I wasn’t a city slicker—far from it, but where I was from the biggest river we could boast was not more than a trickle compared to this rushing beast. 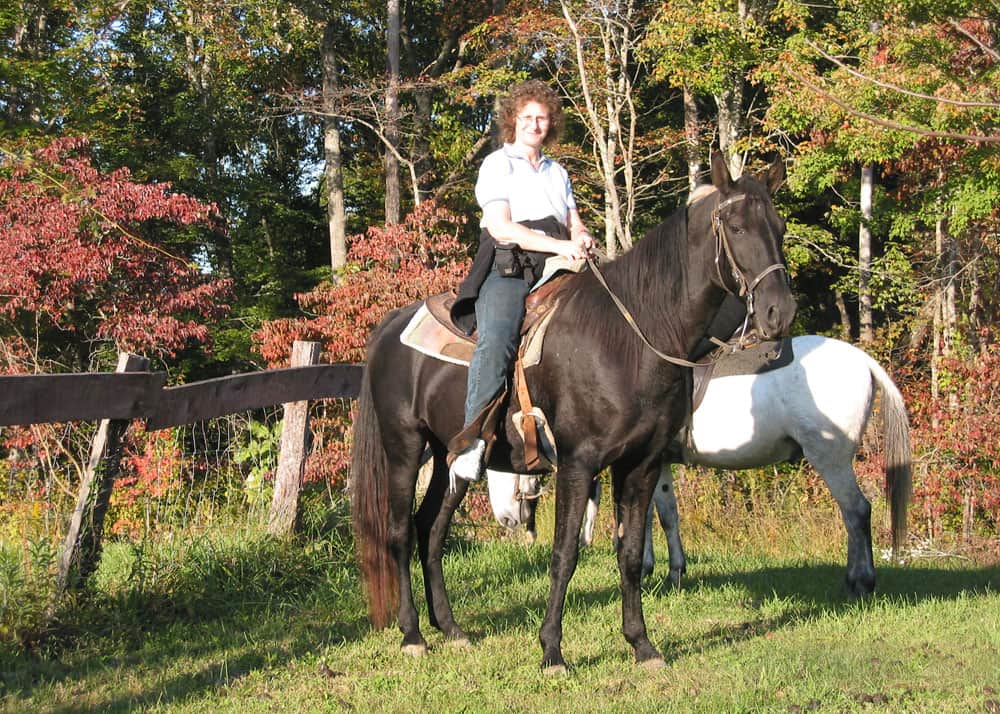 Bill’s horse stepped into the water. At least it wasn’t deep where he crossed, reaching not as high as his stirrups. The horse side-stepped, like it wanted to walk with the flowing current instead of horizontal to it. Finally he waved, and the first of us guided our horses to the water’s edge.

So far Edith, the Tennessee Walking Horse I was riding, hadn’t shown a real love for the water. In fact, it seemed to me she deliberately raced up to every puddle so she could jump over it and not get her feet wet. This was a different story. It didn’t take much encouragement to get her to step into the Cumberland.

I envied her bravery.

Bill was right. Looking down into the water definitely made me dizzy—I immediately focused on the tree-lined shoreline opposite me and shook my head.

I quickly discovered the big challenge was keeping Edith and I from both ending up in the rapids. Since I’d already been whitewater rafting I knew even those small ones were something to avoid at all costs!

“Come on Edith,” I yelled, over the roar of rushing water.

I tightened the reins and guided her further to the right, but the rapids were perilously close on our left. Nearby I heard a shout, and turned to see Cathy’s horse step down between the rocks, so water came up over its belly. Keeping its feet well under it, the horse made its way back to the safe part of the crossing.

The shore was close. “Come on Edith,” I said, “lets go girl. Just a little further.”

The water became shallow quickly, so Edith was soon just ankle deep in it. I turned to watch the rest of the dozen other riders make their way across the river, feeling a sense of accomplishment I hadn’t expected. After all, I thought, rubbing Edith’s neck, she deserved all the credit. 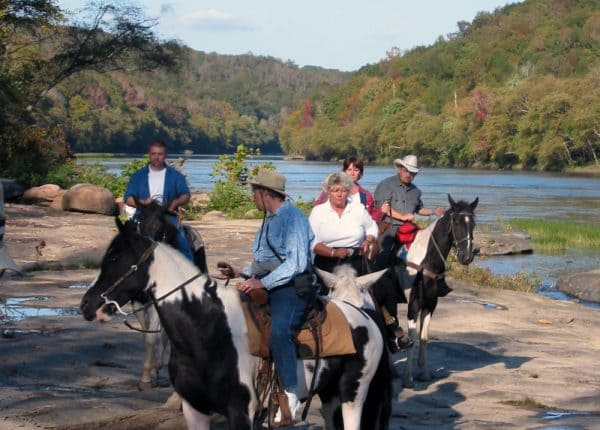 Horses on shore of Cumberland River.

Indeed Edith was the first gaited horse I’d ever ridden, being raised in Quarter Horse and Appaloosa country in Canada. Showing my appy mare, I’d learned how to get her to switch from a trot to a lope quickly, so I’d have to admit most of my miles were made in only two gaits: walk or lope. With Edith, I could feel her feet under me—mind you she was also the tallest horse I’d ever ridden so had a lot of leg to move! She’d have towered over my little 14.2 hand appy.

A registered Tennessee Walking Horse, Edith was an expert at the gaits that give this breed a reputation for its smooth ride, plus she had no problem demonstrating her agility over the rocky terrain. A gaited horse has a running-walk gait that is totally different from what I was used to.

In fact, the gaited horse moves with what is called an overstride, with its right rear over right front, left rear over left front, producing what I can only describe as an experience any other horseback ride I’ve ever taken. Other gaits of the Tennessee Walking Horse include: the rack, pace, foxtrot, stepping pace, single-foot and other variations of the famous running walk. 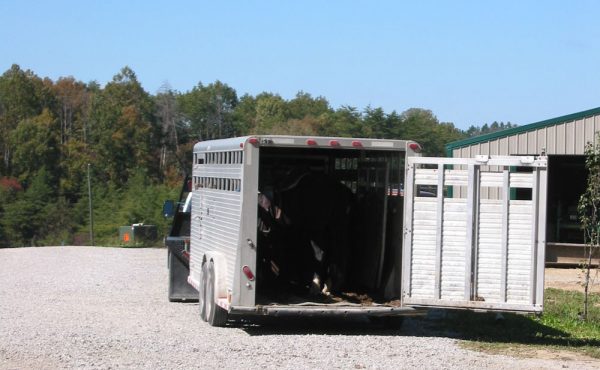 My ride on Edith had started out at an unloading spot for the horse trailer, where our group from Bill’s Riding Stables headed down the highway a short distance to the Sheltowee Trail in the Daniel Boone National Forest. Edith’s horseshoed feet clip-clopped over the pavement while I got a feel for her handling. She was immediately responsive and I was soon chattering away at her like we were old friends—of the animal-person variety.

Sheltowee Trail led around the rim of so-called hills—but my flatlander assessment definitely classed them with the mountains I’d ridden through in Montana. At the start, we were several hundred feet or so above the Cumberland River, which was visible at various points.

Mind you, those were my least favourite views, since when I could see the river it meant Edith and I were walking nonchalantly along a foot wide ledge. Mind you I must admit I felt much safer on her than I’d have done walking myself. 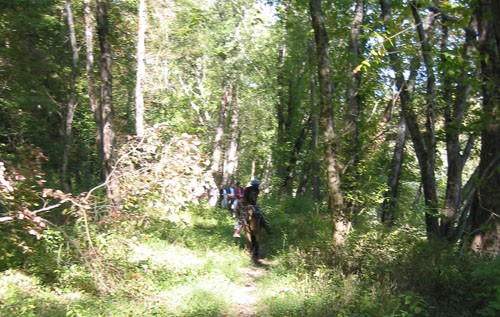 The forest was thick and dense in most places, with a variety of trees. Hemlock, holly, hickory, birch, wild magnolia, elm and poplar blocked my view of the sky. At times solid rock overhangs did the same thing. The trail was, Bill told me, one of the most scenic and demanding ones crossing through the forest.

Edith obviously had a lot more experience at the local terrain than I did, so I soon gave her the decision making in how we’d handle the more challenging parts of the trail.

That’s when I discovered her extra gaits—she loved to let the horse in front get ahead so we could race down a six or eight foot sloped gulley, splash over the water, and land at the top of the other side in about two strides. Well, I had to admit, it was fun!

The horses at Bill’s Riding Stables, we soon discovered, were not trained in the nose to tail style used by large trail riding groups in other areas. In fact, Bill advised us to give each horse her own space, so they could find their own best approach over the rugged terrain. Of course, the amount of “personal space” required is an individual thing and I soon discovered Edith’s idea of it was different than my own. 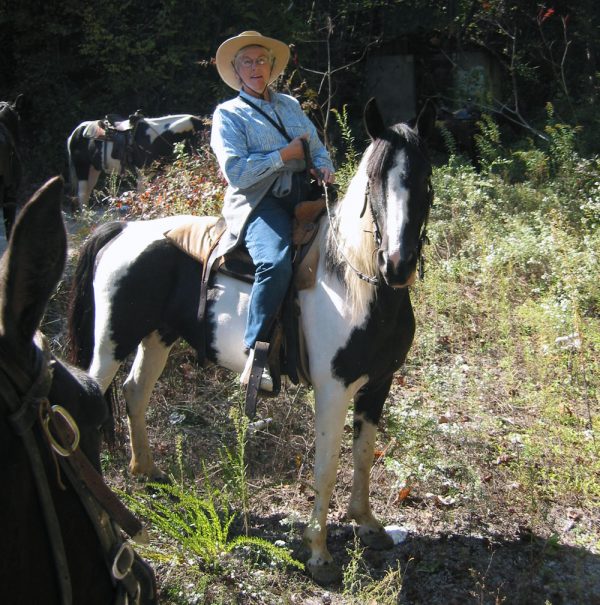 My friend, Janice, riding Lady behind me through a particularly spectacular overhang of forest, got close enough for us to talk for awhile. If I’d have been paying more attention I’d have realized Edith’s ears were laid back and she wasn’t enjoying the chit-chat at all.

With a swift kick of her hind legs Edith put Lady in her place, and me six feet up the mountainside, still on her back, clambering through the rocks and trees.

Once my heart rate slowed to normal, I assured the other riders that was an experience I was used to. In fact it was a lot less scary than looking over the edge at the Cumberland River and the rocky shore. 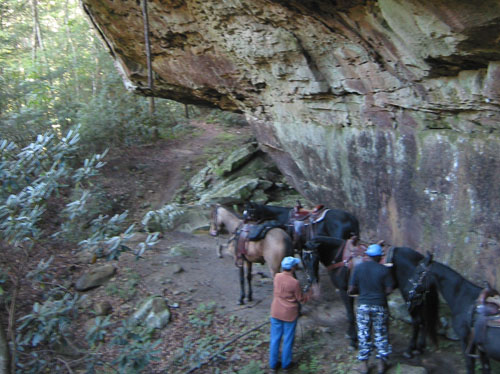 Edith and I squeezed through rock passageways. We walked under overhanging cave-like structures. We saw wild turkeys, squirrels, and several kinds of woodpeckers. We smelt skunks and fragrant flowers. We walked through prickly thorn bushes and over top of foot wide fallen logs. We had an adventure of a lifetime!