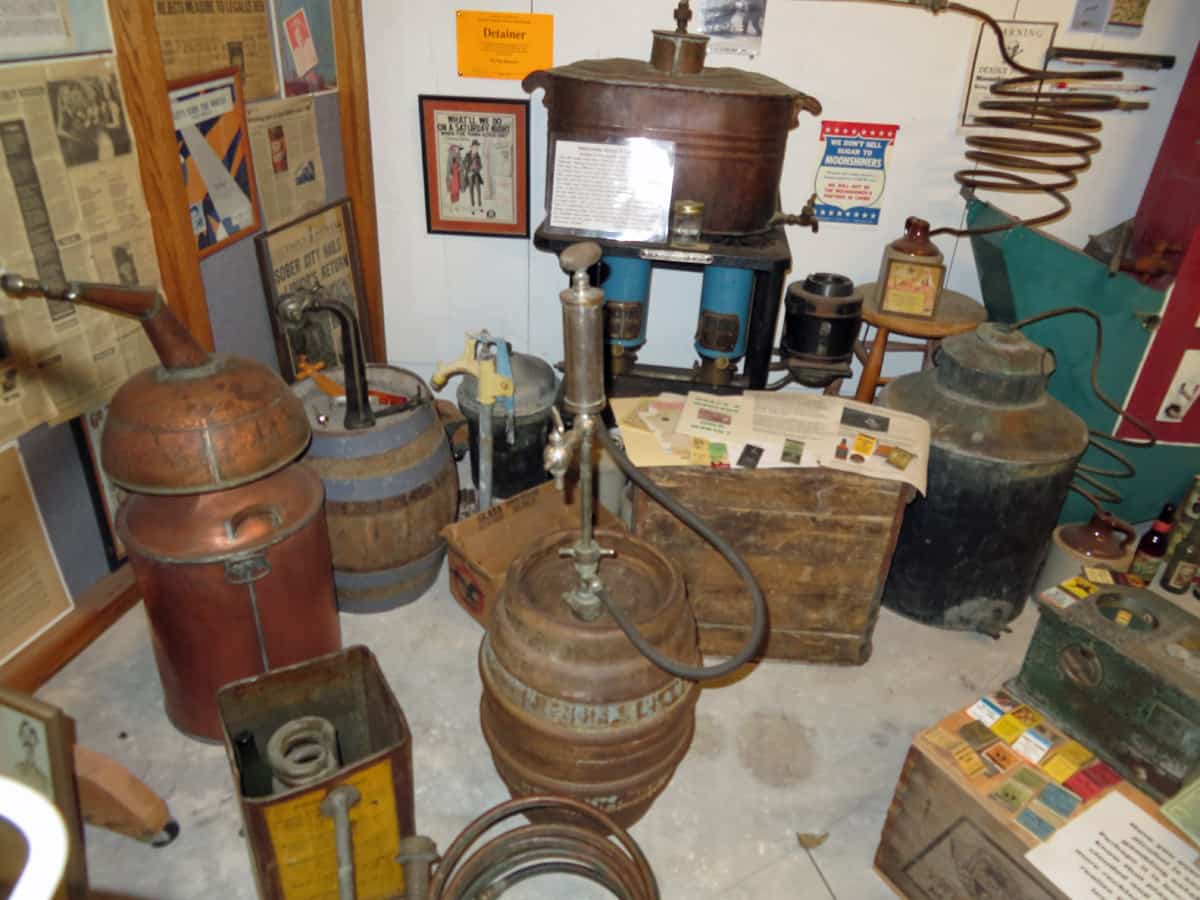 Bootlegger’s still at the Miracle of America Museum in Polson, Montana.

The wells all ran dry in the United States on January 17, 1920 — or were supposed to. On that day, some 97 years ago, 1520 Prohibition Agents were sent out into the world to get rid of all the alcohol.

The most famous of them all was Elliot Ness, who joined the Bureau in 1927. But by then, everyone had realized it was pretty hard to keep people from doing what they wanted, especially when there was a good time involved. If you’re a baby boomer, like me, you probably remember The Untouchables

The Bureau, of course was after alcohol bootleggers, who not only made their own “hooch” and “moonshine,” but also sold it. Many of us will admit to whispered stories of neighbors or grandfathers or cousins, who stepped into those boots to try to make a living on backwoods farms.

According to the Milwaukee Journal Sentinel, there was an unsuspected bootlegger’s paradise east of the town of Fond du Lac. Indeed, Frank Buckley, Enforcement Agent, said in 1929: “Wisconsin [is a] sort of a Utopia where everyone drinks their fill and John Barleycorn still holds forth in splendor.” 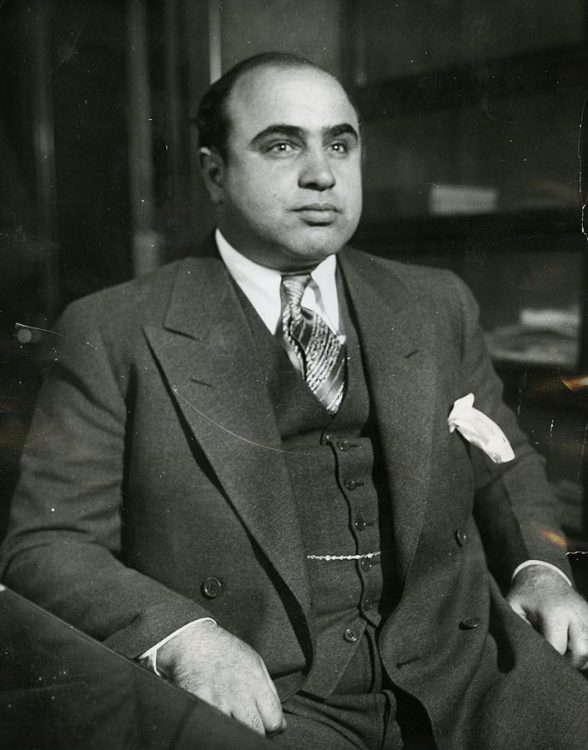 In those days, the stills could be anywhere from sheds to barns to closed up cheese factories, like the one near Silica Road off of Fond du Lac County W. The signs? A hole in the roof for the smoke stack used for venting during the distillery process.

Today, we celebrate those independent spirits with National Bootleggers Day, held fittingly, on January 17, the same day that prohibition began.

And, in an ironic twist of fate, Al Capone, one of the most famous bootleggers and smugglers of all time, also celebrated his birthday on January 17 (born 1899). Capone’s moonshine smuggling was big-time, even apparently into Canada. Saskatchewan (where I live), it seems, had a direct line from the Chicago gangster’s home turf right to the Moose Jaw Tunnels. If you’ve never taken the tour that reenacts the period, I can guarantee you’ll have fun stepping back into prohibition and the 1920s, whether you do it on National Bootleggers Day or one of the other 363 days of the year it’s open!

Wisconsin Still a “Sort of Utopia”

Prohibition ended in 1933, to a lot of fanfare and celebration! The Budweiser Clydesdales may be one of the most enduring of them all, since on April 7, 1933, Billy Wales drove a team of six beautiful Clydesdales through New York, to the Empire State Building, to celebrate the end of prohibition.

Across the nation the beer vats and distilleries and wineries all went back into production — and the bootleggers closed down. In the ensuing 80+ years we’ve seen a rich growth in flavor and options, no matter your beverage of choice.

But getting back to Wisconsin, once described as a utopia for drinkers, there’s still a lot happening! In fact, whether you fancy the sweet flavor of caramel and honey, or the tartness of summer cherries, you’ll find a favorite in one of Wisconsin’s specialty liquors. From beer and cider, to wine and hard liquors, I discovered that Wisconsin has lots to offer in my recent travels.

Taylor Greenwood, a brewer and brand ambassador for Stone Cellar Brewpub and Stone Arch Tap Room said, “We’re always trying to perfect things…,” which certainly shows in their collection of fine microbeers. Their flagship beer, though, according to Greenwood, is their Scottish Ale. Stone Cellar does a number of English ales, he explained, since the owners spent a lot of time in England. 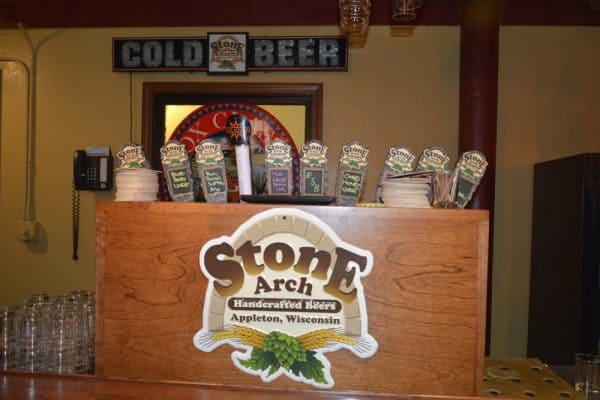 Scottish Ale is 4.9% ABV, and has just a touch of hoppiness, along with its caramel sweetness. My favorite, though, when I hit the tap room, was the Blueberry Wheat beer, which is one of their seasonal brews. From their regular list, I also have to recommend the American style Houdini Honey Wheat beer made with Wisconsin honey—I loved the low bitterness of this light brew.

Stone Cellar makes it a point to use local ingredients, like the honey. And if you’d really like try a Wisconsin local specialty, try their deep fried cheese curds made with Stone Arch Scottish Ale from their appetizer menu in the tap room.

Nobody does local better than Island Orchard Cider with their product line of fine ciders. They’ve cultivated their own apple orchards on Washington Island, an area remarkably similar in geography and weather to Northern France. So in addition to American cultivars, they also grow French and English varieties of apples and pears. In fact, there’s no mistaking the distinctive Normandy traditional taste of their ciders. 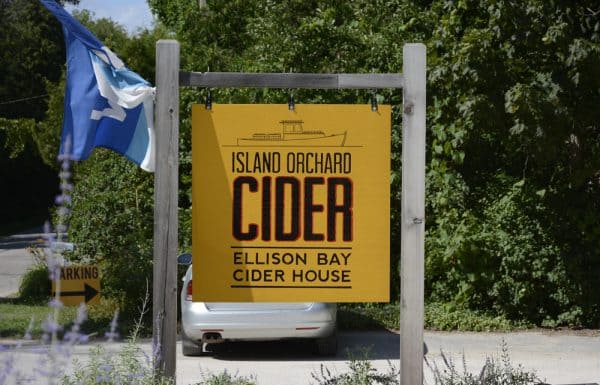 A visit to Island Orchard’s Cider house provides the full experience from seeing the fruit presses to checking out the fermentation tanks, and finally, sipping cider in the tasting room.

The building itself has a long history, since it was built in the 1930s as a transfer station for a fishery and an orchard. Extensive renovations brought it to its current state, complete with a geothermal system that cools the tanks as well as heating the building.

From the tanks, Island Orchard has a couple of different methods of finishing their ciders. I enjoyed the mellow richness of their Oak Aged Apple cider, which is aged in French oak for an additional three months. It pairs well with spicy foods such as seafood stew and Hungarian goulash.

But, since I’m more of a burger girl, my favorites were the bottle conditioned ciders that are more like a bubbly champagne. This type of cider is made by taking aged cider and adding both yeast and sugar, then bottling immediately.

Tart cherries are one of Door County’s most important crops, so it’s no surprise that the Door Peninsula Winery’s first product was a cherry wine. Started in a century old, two-room schoolhouse back in 1974, the business has grown and expanded a number of times. The wine list grew with mango, blackberry, and pear, and now includes Wisconsin-grown grapes developed specifically for northern climates, which they grow in their own vineyards. 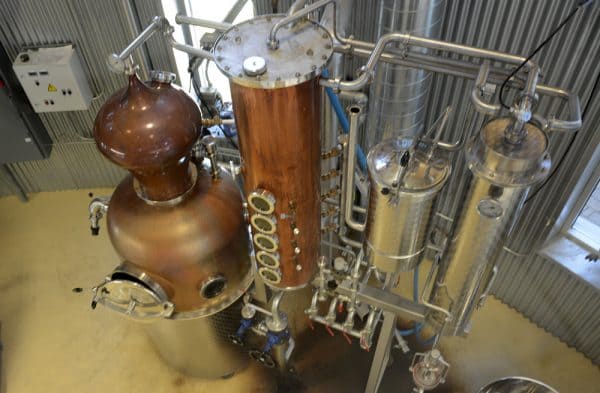 As well as expanding their wine production, they also added the Door County Distillery in 2011. One of the specialties there—and the product I enjoyed the most—was their cherry vodka, made, of course, with locally grown cherries.

In fact, there are so many options, it’s hard to choose in their tasting rooms (there are two). With 45 different wines and over a dozen hard liquors from cherry brandy to cherry moonshine, there are some amazing flavors of Wisconsin here.

While many personal details about George Washington, first president of the United States, have been lost to history, the family recipe for Cherry Bounce survived. And I was lucky enough to make my own jars of it when I visited Wisconsin.

Pack quart jars with fresh-picked Montmorency cherries and cover with a cup of sugar. Then, pour over your choice of alcohol – I used Door County Distillery Cherry Vodka, for a very cherry flavor. If you want something more tropical, try rum. Or, you’ll find bourbon and rye result in something a little more smoky and fruity.