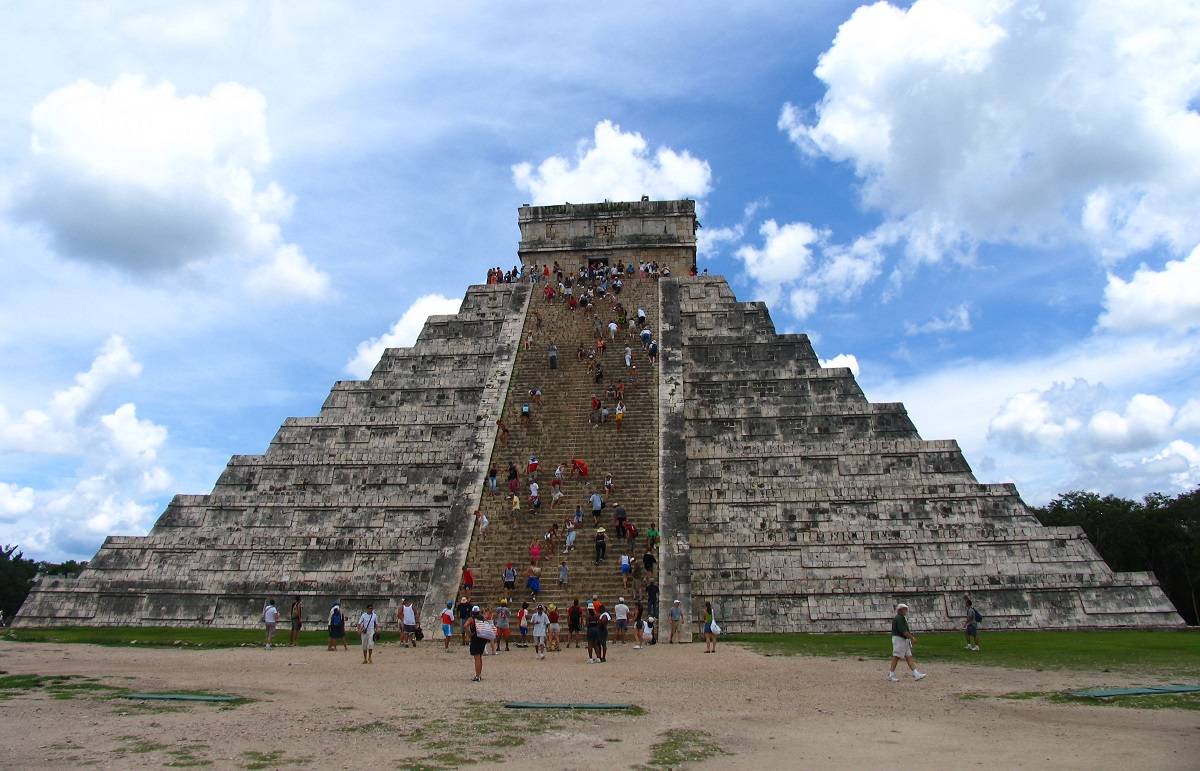 El Castillo pyramid at Chichen Itza in the Yucatan in Mexico.

Some visit Mexico for the beautiful azure blue water and white sandy beaches. Some for tropical weather getaways from colder climates. Me, I planned my trip to Cancun to discover the secrets of the Mayan ruins, some of Mexico’s most amazing treasures.

While there are a number of locations in Mexico to see Mayan ruins, the pyramids and other buildings situated in the pre-Hispanic city of Chichen Itza, were designated a UNESCO World Heritage site in 1988. The site protects half a dozen well preserved structures ranging from the El Castillo (above) to the Temple of the Jaguar.

So, I selected Chichen Itza as the first stop on my quest to learn more about the Mayan ruins and the people who had lived in them. This ancient city, whose name means “in the mouth of the Itzáe’s well,” was home to about 50,000 Maya during the time of its grandeur.

We’ve learned a lot about the Maya civilization since the 1920s, as more and more Mayan ruins in the 20 square miles area of Chichen Itza have been mapped and uncovered. According to my tour guide, these Mayan temples and palaces reveal a lot about the fascinating early civilization of Mesoamerica that consisted of some 40 cities, including Tikal, Uaxactún, Copán, Bonampak, Dos Pilas, Calakmul, Palenque and Río Bec. 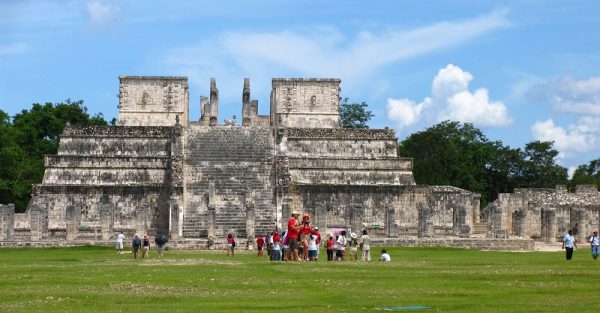 Temple of the Warriors at the Chichen Itza site in Yucatan, Mexico.

At its peak, the Maya population may have reached 2,000,000 people connected in what some believe were city states. Archaeologists know that trade alliances existed as Chichen Itza attracted traders from the Yucatan and Cozumel, who visited the powerful city during the 10th century, bringing goods to share.

Roughly at the center of the site, the massive Pyramid of Quetzalcoatl, called “El Castillo” (the castle) tempts visitors to climb all of its ninety-one steps. Each quarter of the Mayan pyramid has 91 steps, plus there’s a step at the very top of the pyramid, bringing the total to 365–or one step for each day of the year. 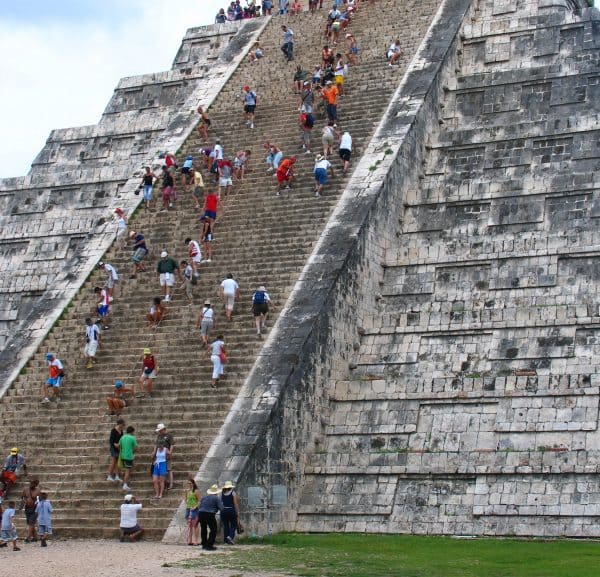 Visitors climbing the 91 steps of El Castillo at Chichen Itza before the activity was closed to the public in 2006.

However, the pyramids show us just one type of ingenuity of the Maya people. You likely remember the doomsday prediction that the world would end with the Mayan calendar, in 2012. It didn’t, but likely the Mayans didn’t think it would either as their mathematical skills and knowledge of astronomy were highly advanced. The Mayan calendar had 365 days, at a time when Europe was still using the Gregorian Calendar, and 2012 would have been the end of a cycle for them.

El Castillo’s base is 60 yards (55.5 meters) on each side and rises to a height of 79 feet. Its four sloping walls lead to a temple at the top. During solstice, sunlight passes through the openings to show 7 Triangles of light and 6 darker triangles, corresponding to the 13 overall levels of the underworld the Maya believed existed. 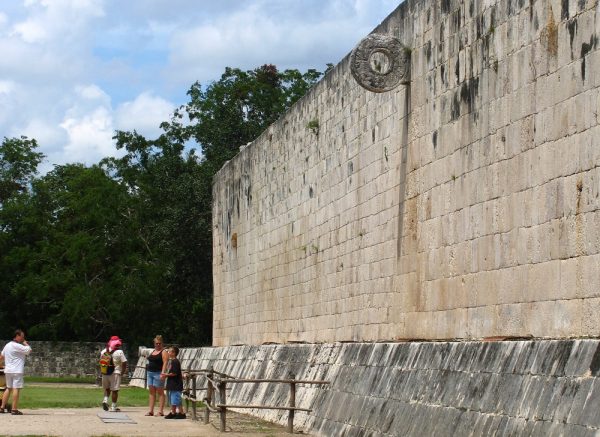 The ball court at Chichen Itza in the Yucatan in Mexico.

My favorite part of the site, however, was the ball court, where games were held, presumably during the equinox. Many believe the winners were killed and sent on to glory in the afterlife, skipping those 13 levels of the underworld.

The court has stone walls 545 feet long and 225 feet wide overall. Players on the court wore two different shoes, a sandal and a boot, and could not use their hands to throw the ball through the hoop that hung high at its center. The most intriguing feature of the court, however, is that when you stand at one end of it and whisper, people at the other end can hear you. We still don’t know how.

The Maya truly had secrets we still haven’t uncovered in the 21st century!

The next site I visited was Cobà, which is home to the tallest pyramid in the Northern part of the Yucatan Peninsula. A few new experiences waited for me there. 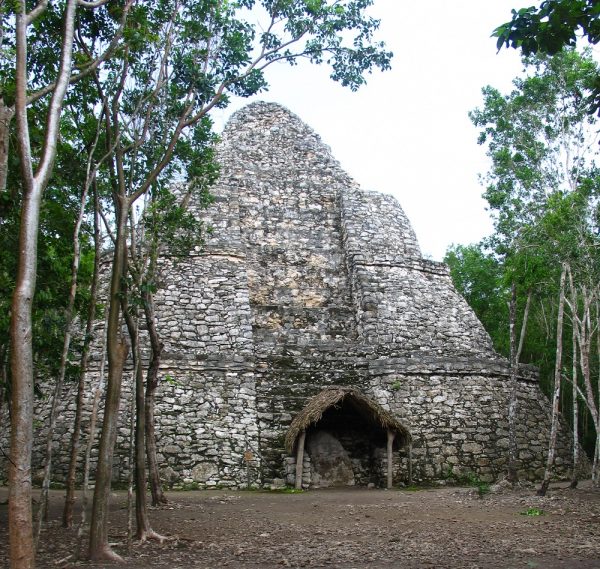 Lxmoja pyramid in Coba in the Yucatan in Mexico.

The rainforest, particularly by afternoon, can be a very hot, humid experience. So, I was more than happy to take a ride in a Mayan taxi, which turned out to be a bicycle-driven two-wheeled carriage pedaled by a smiling member of the Mayan village, to Nohoch Muul.

Nohoch Muul has 120 steps and is close to 140 ft high. The view-—even from the halfway point-—is spectacular. It isn’t, however, an easy climb, as the stairs are uneven and tend to be slippery even when you’re holding onto the rope that runs from top to bottom.

This Nohoch Muul Mayan pyramid can still be climbed, however, it’s expected that it will be forced to close soon like other pyramids around Mexico. 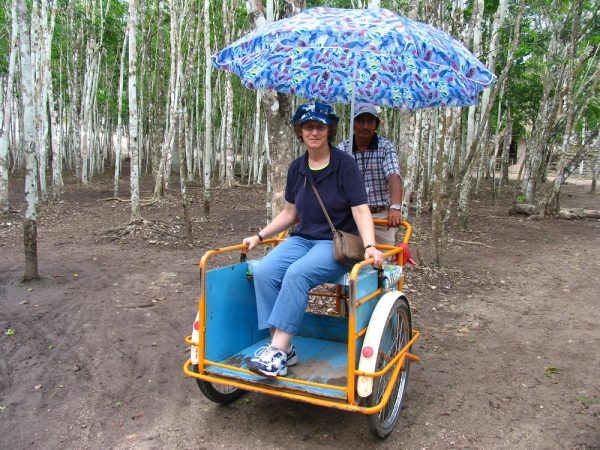 Mayan taxi at Coba in the Yucatan, Mexico.

The ruins of Coba, compared to Chichen Itza, are a lot less touristy and a lot more like stepping back in time. The steamy jungle atmosphere soon made me feel if I blinked I’d be back in the “City of Ghosts,” to a time when it overflowed with a population of 50 to 60 thousand people. I could almost see laborers carrying the rich in litters over the stone streets of the city and hear the voices of children at play. 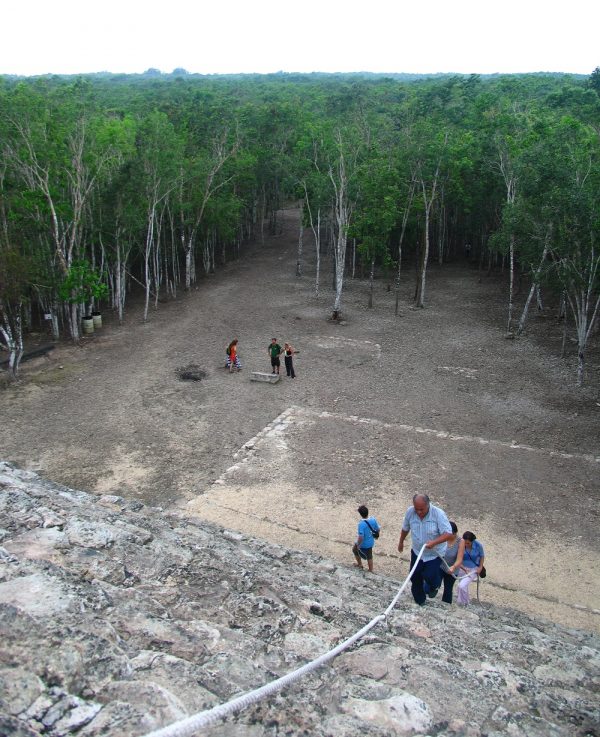 Climbing a pyramid at Coba in the Yucatan in Mexico.

Comprised of over 6500 Mayan ruins and structures, only a small percentage of the treasures at Cobà have actually been excavated. The area, which is occupied by the local Maya people, is over 50 sq. km in size, and is about 50 km west of Tulum. Here, opportunities for a true Mayan Adventure abound!

Coba, while it’s off the beaten path, so to speak, in terms of proximity to other Mayan cities, has the largest collection of stone causeways or roads. Indeed, there are some 50 white roads, or sacbes, which lead historians to believe the city was once the most powerful in the region, controlling farmland, trading routes, and important water sources.

Video of the Mayan Pyramids of Coba

You can climb the Mayan Pyramids of Coba with the Expert Vagabond in this YouTube video.

Whatever reason you have for visiting Cancun and Mexico, make sure to include a day discovering one of the true marvels of the continent—the Mayan pyramids. Alltournative provided my guided tour of the pyramids and my extreme adventure with the zipline and rapeling down a cenote.

For pickup from Cancun or Riviera Maya reserve visit the Alltournative website.